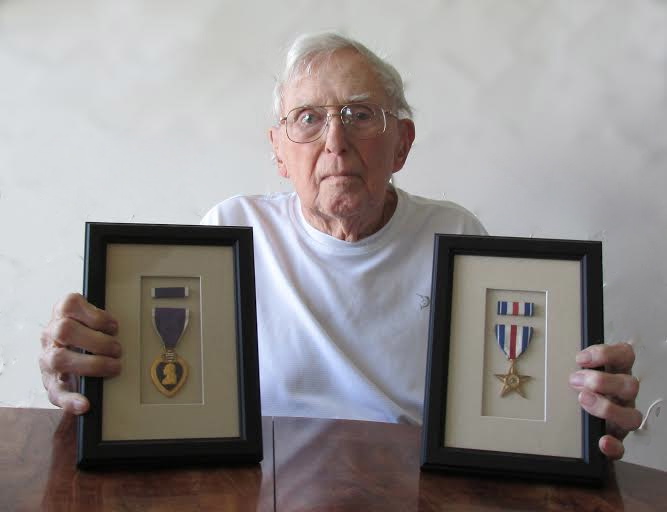 Former Electrician’s Mate 1/C Richard Johnson of Circlewood subdivision in Venice, Fla. holds his “Purple Heart” and “Silver Star” medal for gallantry. He served aboard the carrier USS Ticonderoga during WW II when it was hit by two Kamikazes. His actions during the fire help save the carrier. Sun photo by Don Moore

Richard Johnson of Circlewood, a south Venice subdivision, escaped with his life when a couple of Japanese kamikaze aircraft struck the Carrier USS Ticonderoga (CV-14) within minutes of each other the afternoon of Jan. 21, 1945 off the coast of Formosa during World War II.

“As we were going through the Straits of Formosa we got hit by two Japanese suicide planes. I just got off general quarters in the engine room and was heading topside to get a cup of coffee when I heard this boom, boom, boom. I came out of the elevator at the hanger deck. About that time the Kamikaze hit 50 feet from me and threw burning gasoline all over,” the 87-year-old former sailor recalled.

“A group of sailors on the starboard side of the hanger deck were incinerated in the blast. I was sitting in a puddle of gasoline when the plane exploded,” Johnson said. “The thing that saved me was there was one of our airplanes on the deck between the exploding Kamikaze and me. The plane shielded me from some of the explosion.”

Even so, Johnson’s head, hands, scalp and back were badly burned when the aviation fuel caught fire. All the hair was burned off his head.

“Ten feet away was a sprinkler station, that’s where I headed. The smoke on the hangar deck was so thick I could hardly see where I was going,” he said. “In the sprinkler station was a series of boxes, like fire alarm boxes with glass fronts you were supposed to break with a little cast iron hammer. When I tried to break the glass with the hammer it broke.

“I found something else to break the glass and pulled the handle down inside that set off the sprinkler system. It was this action that helped save the Ticonderoga from total destruction, I learned later.”

The Ticonderoga is pictured shortly after the Kamikaze attack in the Straits of Formosa in January 1945. The carrier is billowing smoke from the deadly crashes. U.S. Navy photo

Johnson received the “Silver Star” for his actions that activated the ship’s sprinklers.

“I laid down on the deck on my stomach. The water from the sprinkler system put out the fire in my smoldering clothes. I finally found a gas mask in the smoke and confusion below deck and put it on.

“A few minutes later I heard this hissing sound. I started to yell. Then I saw a couple of guys with a fire hose. One came over to where I was, saw me on my stomach and got a gurney for me. Eventually I ended up on the ship’s fantail where I stayed until the Ticonderoga reached Ulithi Island, a Navy supply depot a day or so away by ship,” he said.

Some half an hour after the first Kamikaze struck the carrier, a second suicide plane hit the ship’s bridge wounding Capt. Dixie Keefer, skipper of the carrier, and killing a number of other people on the bridge. Keefer had been the executive officer of the USS Yorktown when she was hit and sunk by a Japanese submarine at the Battle of Midway in 1942.

When the Ticonderoga reached Ulithi, Johnson was transferred to a hospital ship. It was at this point the former electrician’s mate first class began his recovery process. For the next 2 1/2 years he would go from Naval hospital to hospital being treated for his injuries aboard ship.

He was finally discharged from the Navy in 1947. His last hospital stay was two years at St. Alban’s Hospital in Long Island, N.Y.

Johnson took the G.I. Bill, attended four years of college and went to work for Curtis Wright Corp. helping build flight simulators. He spent a decade there before going to work for the Hazeltine Corp. that made electronic gear for the Navy where he spent another few years.

Finally he opened his own advertising agency–Richard Jayne Associates–in North Jersey outside New York. He ran that business for decades until he and his wife, Rose, retired to Venice 28 years ago and became snowbirds at Circlewood.

They have five children: Jayne, Michael, Sandra, Steven and William.

This story was first published in the Charlotte Sun newspaper, Port Charlotte, Fla. on Monday, March 31, 2014 and is republished with permission.