Lt. Commander Christ Nielsen is pictured about the time he served as the Naval Aviation Supply Officer in Philadelphia in 1985. Photo provided

Christ Nielsen of Punta Gorda, Fla. was a “Seadevil.” He was a member of U.S. Navy Helicopter Combat Support Squadron Seven that rescued downed pilots and seamen in trouble off the coast of Vietnam during the war. After three years of college he joined the Navy in December 1968. Trained to be part of the flight crew on a H-3 “Sea King” helicopter, Nielsen wound up in Subic Point, Philippines. Before his three year tour of duty was over the young Aviation Machinist Mate 2nd Class had served on nine of this country’s 11major aircraft carriers and 26 destroyers while flying as cable operator aboard a rescue helicopter. The carriers included: USS Ranger, Constitution, Coral Sea, America, Oriskany, Bon Homme Richard, Kitty Hawk, Hancock and Midway. “We would go out with one of our carriers and stay out with them off the coast of Vietnam for a month at a time,” the 66-year-old former sailor explained. “From the carrier we’d fly rescue missions along the coast of North Vietnam. “On one such day an A-7 “Corsair” was shot down by a Russian SAM missile. The pilot jumped out of his plane over the Tonkin Gulf and we picked him up in his yellow life-raft,” Nielsen said. “The gulf was calm that day and as we circled we decided to put our swimmer in the water to help him. I dropped my cable down and we pick both of them up. The pilot was in excellent shape.” About the time Nielsen was finishing his first hitch in the Navy he was involved in a much more complicated rescue off Subic Bay in the Philippines. A “Jolly Green Giant” rescue helicopter had gone down at sea with six aboard. “The helicopter’s main gear box went out on them while they were in the air. They had no choice but to set the chopper down in the water,” he said. “The crew vacated the downed helicopter in a 20-man life raft. When we arrived the Jolly Green crew jumped from the life raft into the water one at a time and we picked ’em up.” Lt. Col. James Green, the Jolly Green pilot, recalled being the last person out of the life raft. “While in the water waiting for pickup a shark appeared about 10 feet in front of me,” he said. “His beady eyes were terrifying! “I prayed. He ambled off to my right. “The first pickup attempt failed. While waiting in the water a huge group of small fish were sucking on my flight suit. “All of a sudden they disappeared. I looked for another shark. I found him behind me about eight to 10 feet. “I prayed some more. He left, too.” The colonel was plucked from the sea by Nielsen’s helicopter crew and flown back to Subic Bay none the worse for his experience. The other five members who were rescued that day sustained no serious injuries either. 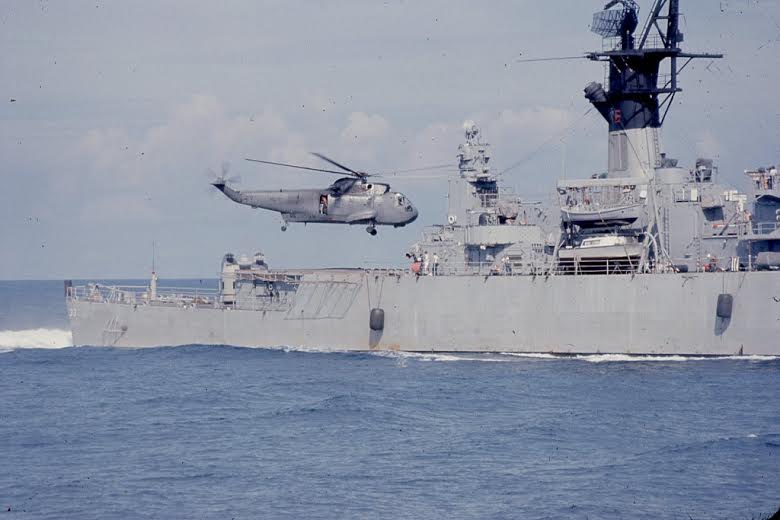 “Big Mother,” a Sea King helicopter rescued Cmdr. Marce Gilfrey, a “Corsair” pilot, shot down over North Vietnam. Nielsen hoisted the downed pilot out of the drink and into the chopper. Photo provided

About the same time Cmdr. Mace Gilfrey, pilot of another “Corsair” fighter-bomber talks about the SAM that knocked his plane out of the air over North Vietnam during a change-of-watch ceremony aboard the carrier USS Kitty Hawk. “It looks like a long telephone pole traveling at four times the speed of sound with a beautiful orange tail,” he explained. He was leading an air strike against the Dong Hoi area when a volley of six SAMs were fired at his aircraft. One of the missiles damaged the tail of his plane that caught fire. Gilfrey managed to keep his “Corsair” in the air and fly it two miles off the coast before ejecting. He was picked up by Nielsen’s rescue chopper 30 minutes later. “We had just finished an in-flight refuel…and were orbiting waiting for something to do. There was a lot of SAM activity going on over the air. After a while we heard someone say something about sighting a chute and a bird going in the water,” Nielsen said. “We called in and asked if we could check it out and got permission. As we got nearer to the area we saw the A-7 cycling over the water where the survivor was. “We dropped our swimmer and made another circle of the downed pilot. Our swimmer got the survivor and himself hooked and ready he gave me the thumbs up. I got them both inside the aircraft without incident and advised our pilot we were clear for forward flight.” Nielsen got out of the Navy. But a few months later but letters from his buddies who were still in the service convinced him to re-up. It was during his next three years in the Navy spent at Subic Bay he completed his last few months of college and received his degree. Then he applied for Officer’s Candidate School and was admitted. “Eventually I ended up as a supply officer at a base in Adak, Alaska,” Nielsen said. “It was a cold barren place, but somebody had planted 20 pine trees that grew about five feet tall we called ‘The Adak National Forest.’ Later in his career he became the Naval Aviation Supply Officer in Philadelphia. “I was in charge of supply support for a bunch of EA-6B (Prowler) fighter-bombers used as electronic jamming planes. One of these planes could fly up the East Coast and jam all of our electronic communications. Everything!” By 1991 Nielsen had spent 22 years in the service. He retired a lieutenant commander. He established a janitorial service in the Grand Rapids, Mich. area for a decade. After that he joined the federal Transportation Security Administration where he worked for a while. It was the TSA that brought him to Punta Gorda. In 2003 he and his wife, Carol, moved into his late mother’s home in Punta Gorda Isles. They have two grown children: Chris and Hans.

This story was first published in the Charlotte Sun newspaper, Port Charlotte, Fla. on Wednesday, March 19, 2014 and is republished with permission.