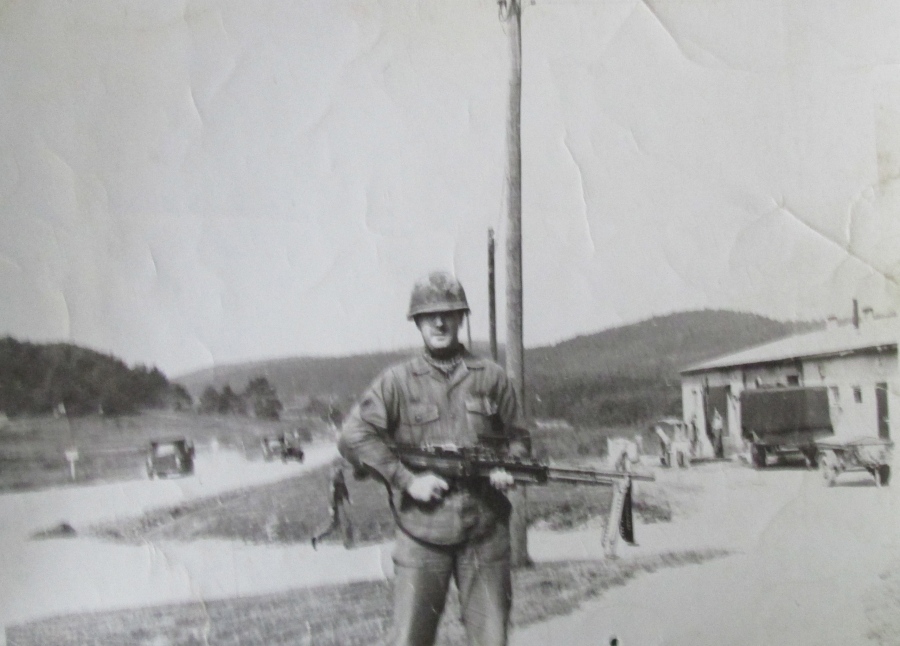 Cpl. Al Beyer holds a M-60 machine-gun along the German-Russian border will paying "Chicken" with the Soviets during the late 1960s. Photo provided

Former Cpl. Al Beyer of Port Charlotte, Fla. ended up protecting Europe and the rest of the NATO countries from the Soviet troops along the German-Russian border in 1968 instead of going to Vietnam during the war. He served in a mechanized infantry unit attached to the 3rd Armored Division stationed during the “Cold War” at the Fulda Gap near Gelnhausen, Germany.

“I was one of 13 guys in our company who didn’t go to Vietnam. I was sent to Germany and ended up along the Russian border watching the Soviets. I left for Europe five days before Christmas 1967 and didn’t return until October 1969,” the 67-year old local resident said.

Gelnhausen was a medieval town with cobblestone streets and a church with a bell-tower that had been there for hundreds of years. The bell in the tower had bullet holes from fighting during World War II. Snipers used towers like this to shoot at approaching enemy forces.

“When President John Kennedy put nuclear tipped missiles along the border with Russia in this part of Europe things started heating up between us and the Russians,” Beyer explained. “The Fulda Gap is where the Russians would have come if war had started.

“It was about the time Martin Luther King Jr. was assassinated, in April of 1968, when we started getting massive alerts. Every time we got one of these alerts we would fall out with all our gear and motorized equipment and head for the gap,” he said.

“I was in a mechanized infantry unit that traveled in a 114 tracked troop transport attached to the 3rd Armored Division. Twelve of us loaded into a 114 equipped with a 106 recoilless rifle and a .50 caliber machine-gun.”

Beyer and his fellow infantrymen went into battle behind the M-60A-1, 60 ton tanks. On the enemy side of the border we were told the Soviets had tank divisions, he said.

“As things heated up between us and the Russians, things were also heating up in Vietnam. Soldiers in my company would get their bunk kicked in the middle of the night. Then they were told they had 20 minutes to get their gear together and be on their way to Vietnam.

“In no time we were down 50 percent in troop strength. Plus all our extra .50 cal. machine-gun barrels and tripods were sent to Vietnam, too. It got pretty serious with half our troops fighting in Southeast Asia.

“I had two buddies who never returned. They were killed in Vietnam,” Beyer said sadly.

When the siren sounded along the German border, thousands of troops and equipment moved up to the five kilometer stretch of no man’s land in the gap and face each other on numerous occasions during 1968 and ’69.

“There were times when we’d come off an alert and 18 to 24 hours later we’d go right back on alert in the gap,” he said. “I never actually saw a Russian in the gap during the time I was there. Five kilometers was too far away to see them.

“One time, during one of these advances, our 114 Transport ran over a Renault car and flattened most of it out. When we arrived at the gap we’d set up a fighting perimeter and wait for the Russians to advance. They never did,” he said. 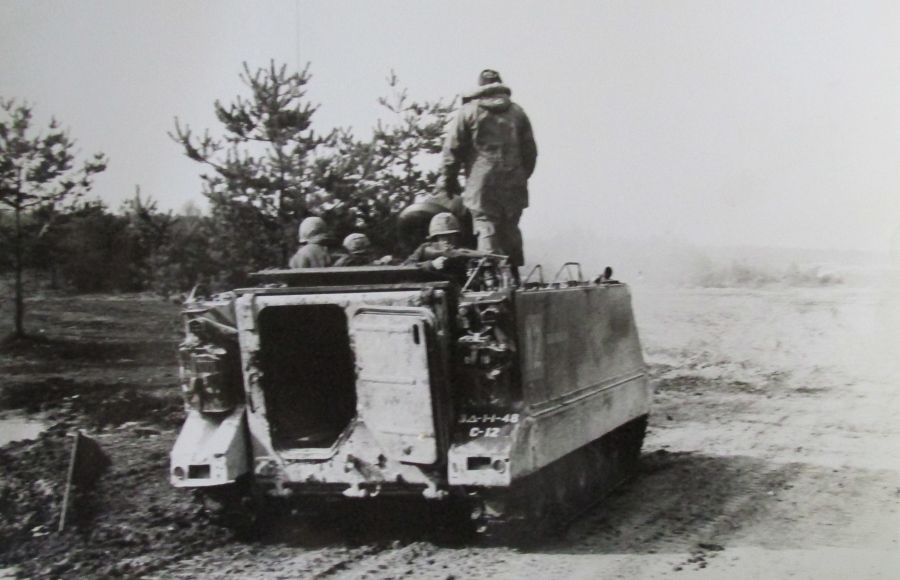 Cpl. Al Beyer fires a .50 caliber machine gun on a 114 Troop Transport during maneuvers in Germany in the 1960s. His 3rd Armored Division was toe-to-toe with the Russians in the Fulda Gap along the German border. Photo provided

“The longest we spent on the line at the gap was 60 days. Most of the time we slept in sleeping bags in our 114 or in the back of an Army truck. In the winter it was extremely cold in Germany at night sleeping like that.”

What Beyer is most proud of his father’s and uncle’s service in the military during World War II. His dad served as a corporal in North Africa and Europe with the 6th Air Force. His campaign ribbons show three battle stars for a trio of major confrontations he fought in. His uncle was a mess sergeant and on duty serving chow to the troops at Hickam Field, Honolulu that Sunday morning when the Japanese attacked Pearl Harbor forcing the United States into the Second World War.

In October 1969 Beyer’s two years over there were up. He returned to his home in Michigan. After a couple of years at a local college he received an AA degree and returned to the tool and die trade.

“Eventually GM hired me as a tool and die man. I worked for GM’s Chevrolet and Pontiac divisions for a bit more than 22 years. Then Sally and I moved to Port Charlotte, Fla. in 2003.

The couple has three grown children: Terry, Marci and Andrea.

This story was first published in the Charlotte Sun newspaper, Port Charlotte, Fla. on Monday, March 8, 2014 and is republished with permission.