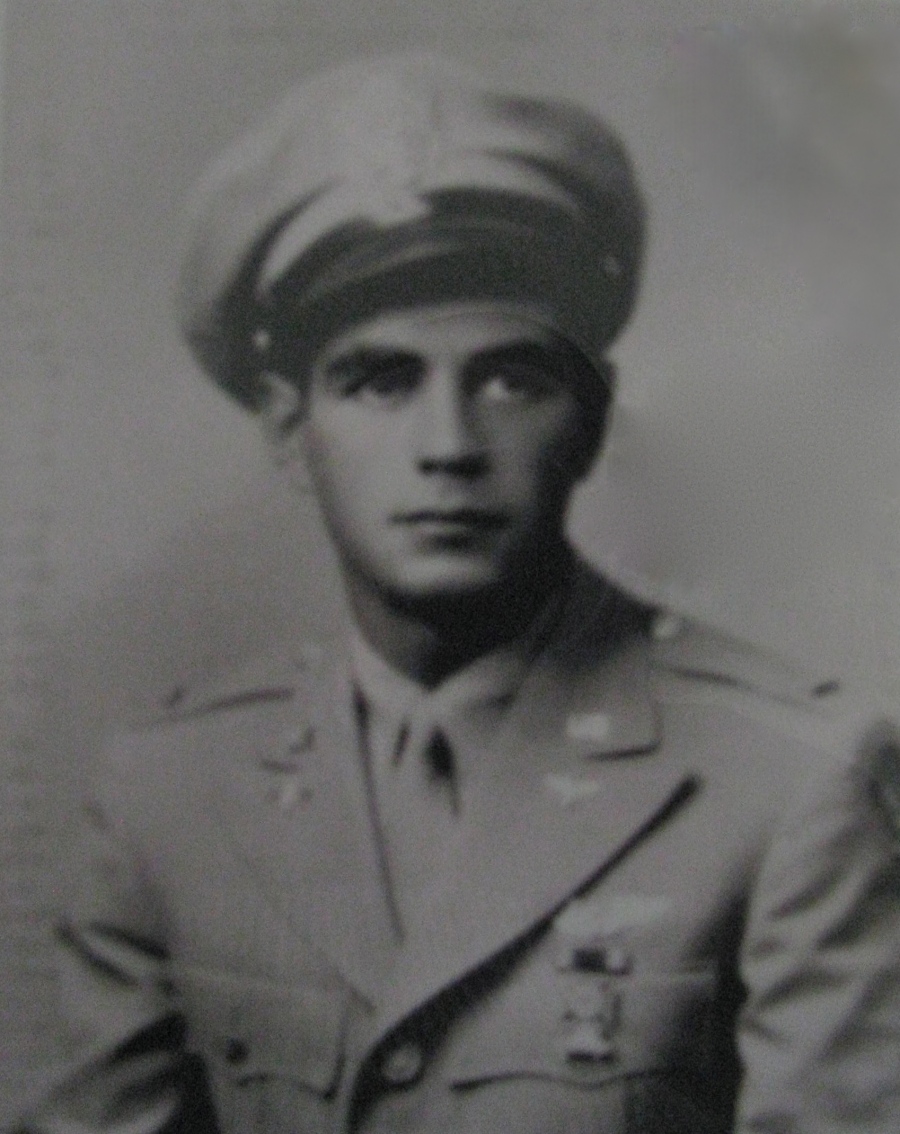 This was 2nd Lt. Leon Gumley when he graduated from glider flight training at Lubbock, Texas in 1943. Photo provided 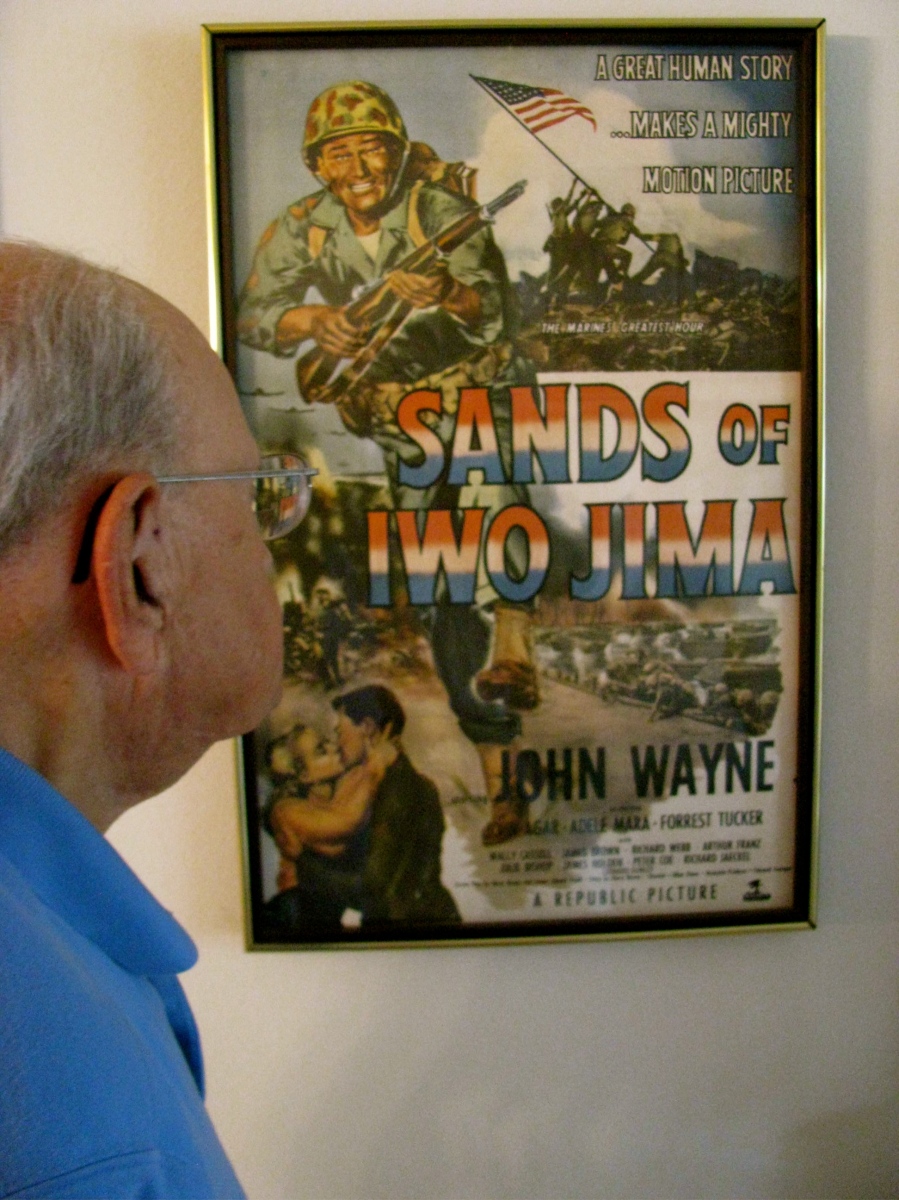 Leon Gumley of Sarasota, Fla. looks at a movie poster on his living ­room wall advertising
“Sands of Iwo Jima” which he played in with John Wayne after being a glider pilot in
World War II. Sun photo by Don Moore

Leon Gumley died in John Wayne’s arms as they fought their way up Mount Suribachi in the closing minutes of the 1949 World War II movie “Sands of Iwo Jima.” He played Marine Pvt. Sid Stein and Wayne was Sgt. John Striker, the hero, who was also killed by a Japanese sniper’s bullet during the closing scene of the film.

In reality, Gumley was a glider pilot during the Second World War who probably saved his own life, he maintains, by cracking up two planes while learning to fly in Texas 65 years ago. He never made it into battle with his glider. He stayed stateside until late in the war when gliders were no more use to the invading Allied forces. At that point he switched and became a gunnery officer on a B-­29 “Super Fortress” and was in training in Fort Myers, Fla. when the war ended.

“I was in my fourth year at Louisiana State University when the Japs bombed Pearl Harbor. Ten days later I volunteered for the Army Air Corps. I went into the service on Jan. 17, 1942,” the 93­-year-­old former aviator who now lives in Sarasota, Fla. said. “Since I already had a civilian pilot’s license I was told I could get my glider pilot’s license in six weeks. I was in a hurry to go overseas and kill Nazis.

John Wayne has his left arm around Leon and his right around John Agar. Also in the photo is Wally Cassell on the set of “Sands of Iwo Jima” filmed in Hollywood in 1949. Photo provided

“When I set out to go to glider school there was no school and no gliders. It took me until the September of 1943 before I finally graduated from glider flying school in Lubbock, Texas.”

By then Gumley had cracked up two planes during training, hurt his back and was grounded.

“Gliders were very difficult to fly. They had a 70-­foot wingspan and there was a tremendous amount of lag between the time you turned the steering wheel on a glider and it finally turned. They were like lumbering boxcars in the air,” he said.

“The first time I crashed I was flying a Piper Cub. I was doing a dead stick landing at night. I came in hot, touched the breaks and the plane flipped over on its back, “Gumley explained. “The plane was wiped out, but I wasn’t hurt because I was wearing a fur­-lined flying suit.

“The second time, I was being towed while flying a CG­4A glider and I got a false release from the C­47 tow plane. The tow plane dropped the tow line and I ended up landing in an area of rocks and trees. The glider was wrecked and I was thrown out injuring my back.

“I spent the rest of my time stateside and that’s what saved me. So many of my fellow glider pilots were killed during the D-­Day Invasion into Normandy, France. We were training to fly our gliders behind the beach at Normandy. Of the 500 Allies gliders flewn in on D-­Day only 13 were in sufficiently good condition to be used in combat a
second time.”

After working as a duty officer it was apparent no more gliders would be used during the final months of the war so Gumley decided to become a gunnery offer on a B­-29 “Super Fortress.”

“We trained in Fort Myers. I celebrated V­-J Day (Victory Over Japan Day) in 1945 with a girlfriend. We were partying at the Clewiston Inn, got blind drunk and we both fell in the Okeechobee Canal,” he recalled with a chuckle.

After the war he stayed in the Air Force Reserves for 27 years. He retired a lieutenant colonel in the Film Production Department of the U.S. Air Force. He produced movies for the Air Force.

“After the war I took the G.I. Bill and went back to school. I didn’t return to LSU, I decided I wanted to be an actor and so I trained at the Pasadena Playhouse Little Theater. I got my first movie role in ‘Sands of Iwo Jima’ staring John Wayne,” Gumley recalled. “I played the part of Pvt. Sid Stein who died in John Wayne’s arms on Suribachi.

The movie was partially made at the Marine Corps base at Camp Pendleton, Calif. Other scenes were shot at the Republic Studios in Studio City, Calif. Remembering the time he spent with Wayne, he said, “John hung out mostly with the big shots, the director and the producer. When we went on the bus to the location shots with him he was friendly enough.

Gumley was learning to fly at glider at the field in Lubbock, Texas when this picture was snapped. Photo provided

“After I saw myself on the screen I decided I would never make a living as an actor. So I decided to go into movie production,” he said. Gumley decided to go back home to New York City and live with his parents until he landed a job with NBC.

“I became the stage manager for the Milton Berle Show in 1950. I did that for three years until I couldn’t stand it any more. Uncle Miltie was a difficult person to work with even though he was very knowledgeable. We were inventing television as we went along.

“Then I got a job managing the CBS News Studio. For three more years I worked with Ed Murrow, Walter Cronkite and Eric Sevareid.

“After that I went into independent television production. I made a lot of medical documentary films of heart and liver transplants. I did that for more than 30 years,” he said. “It was during this period I made: ‘Suicide Mission, Silent Winged Worriers.’

“After the war I would tell people I was a glider pilot in World War II. They didn’t believe me or they had never heard about the glider program. As a consequence, I decided to make a film about World War II glider pilots. I got the History Channel to fund.

It took me 10 years to convince them to let me produce it and they wanted me to make it in 10 weeks.”

He did it. The hour ­long movie chronicles the exploits of the gilder pilots of World War II and the glider infantry soldiers that flew with them. It can be seen from time­-to­-time on the History Channel.

He and Shirley, his late wife, have two children: Lisa, deceased, and David.

This story was first published in the Charlotte Sun newspaper, Port Charlotte, Fla. on Monday, Feb. 10, 2014 and is republished with permission.

Click here to view Gumley’s collection in the Library of Congress.