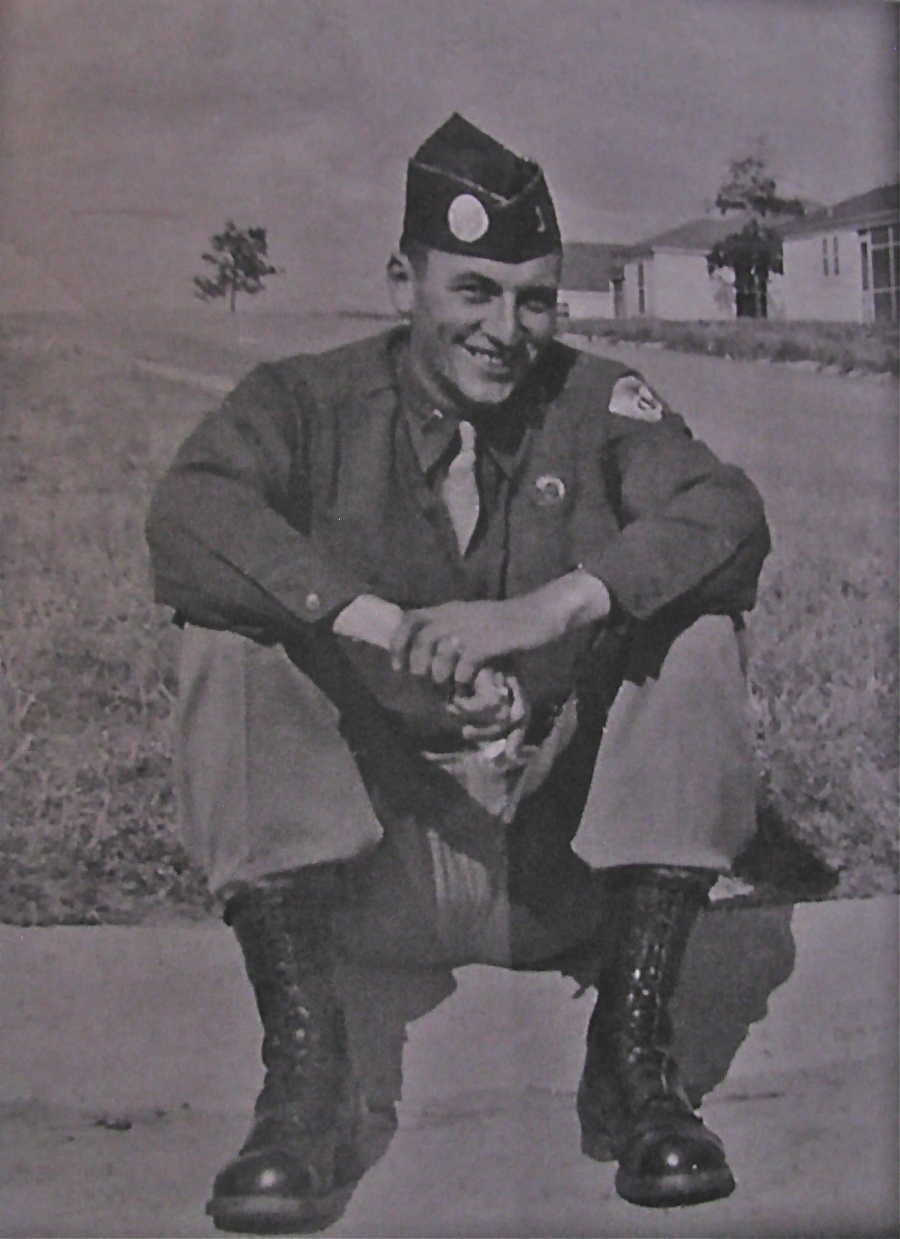 Andy Carrico is pictured as a paratrooper at Fort Polk, La. before he was shipped to the Pacific Theatre of Operations with the 511th Airborne Regiment during World War II. Photo provided 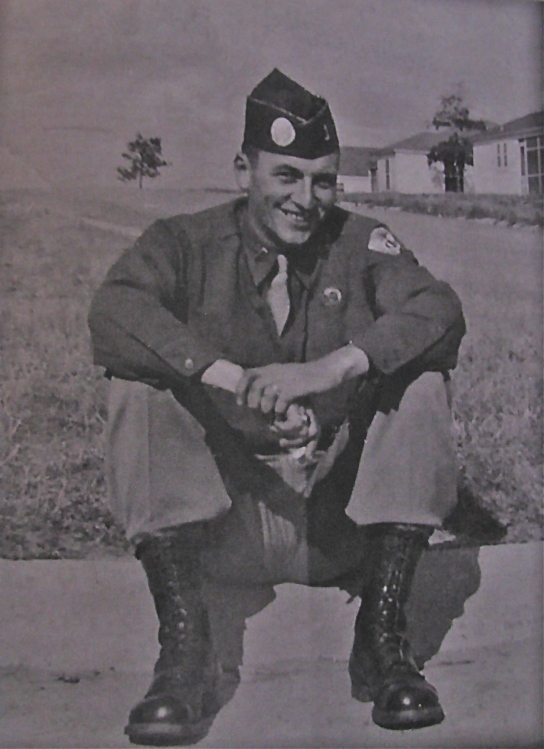 Andy Carrico is pictured as a paratrooper at Fort Polk, La. before he was shipped to the Pacific Theatre of Operations with the 511th Airborne Regiment during World War II. Photo provided

1st Lt. Andy Carrico’s D-Company platoon, part of the 511th Parachute Infantry Regiment, trained for five months on New Guinea in preparation for their assault on the Japanese-held island of Leyte. When his regiment landed on the beach at Leyte the enemy was nowhere to be found. But Carrico and the rest of his airborne regiment didn’t go far from the beach before they ran head-on into the Japanese in the mountainous jungle terrain.

“It was Nov. 22, 1944 when our division commander Maj. Gen. Joseph Swing took the 11th Airborne Division into the mountains at Leyte. Our mission was to follow the Japanese who were waiting for us in the jungle,” the 96-year-old resident who lives in Plantation, south of Venice, Fla. said.

“Our westward march across steep hills covered with thick, wet jungle growth was painfully slow. The Japs were everywhere in the bushes,” he said. “In addition to continuously fighting the Japs, another one of our big problems was the lack of resupply. Our C-47 transports had trouble dropping food to us.

“This meant we ate anything we could find–dogs, roots, potatoes,” Carrico recalled 65-years later. “When you’re hungry you’ll eat anything.

“It was a miserable existence. We carried our wounded with us as we fought the Japanese further and further back into the jungle. We finally came out onto the beach on the other side of Leyte on Christmas day 1944.

“Gen. Swing promised us the best Christmas dinner we had ever eaten if we ran the Japs off Leyte. He kept his word. We had turkey with all the trimmings. Problem was everybody got sick because we weren’t used to eating so much good food all at once,” Carrico said with a smile.

“Official reports said we killed 5,700 Japanese on Leyte by actual count. I estimate my platoon killed 300 on Dec. 22 alone. Altogether our platoon probably killed 500 between Nov. 22, when we went into the mountains, and Dec. 24, when we came out,” he said.

Shortly after reaching the far shore of Leyte, Carrico and his airborne troopers were taken by ship to Mindoro Island in the Philippines. It took the unit three days to reach its destination.

“We flew off in C-47 transports from Mindoro and headed for the drop zone at Tagaytay Ridge near Lake Taal on the island of Luzon. The weather was beautiful when we jumped into a farmer’s field at 8:30 a.m. 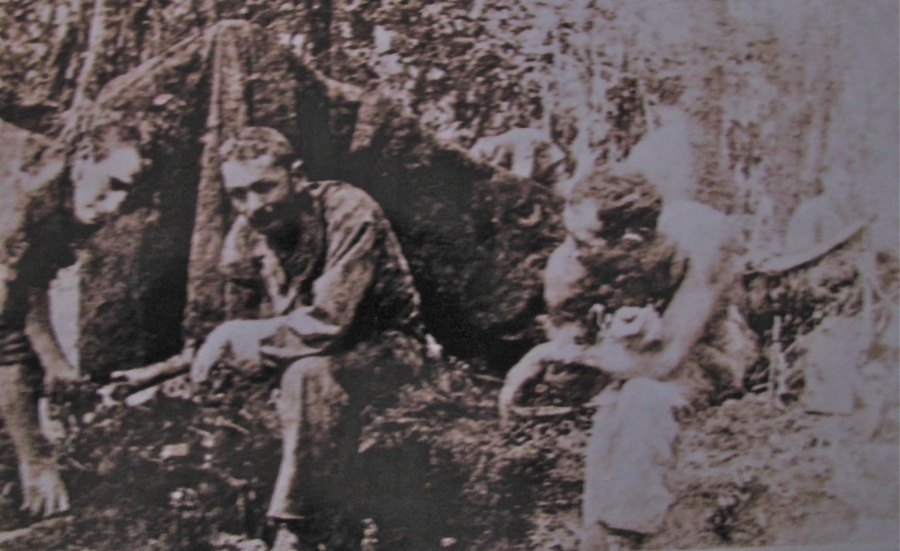 1st Lt. Andy Carrico (center) and a couple of buddies tough it out in the jungle on Leyte fighting the Japanese in
November 1944. Photo provided

“We jumped at 600 feet. It was a nice soft landing. We encountered no Japanese.

“Once we got on the ground we headed for Manila about 30 miles away. We walked along a concrete road for miles until we reached the town of Imus where the Japanese were waiting for us,” he said. “We ran into a hornet’s nest of Japanese Imperial Marines who were holding a warehouse. After fighting to capture the warehouse all day we finally decided it was too strongly defended by the enemy and bypass what was left of the badly damaged building.

“The 11th’s new mission was to pierce the Genko Line, a strong belt of Japanese fortifications encircling the southern side of Manila. There was an extensive network of concrete pillboxes beginning at the Paranaque River four miles outside the city.

“Company D, our unit, finally crossed the Paranaque River fighting the Japanese all the way, at times it was hand-to-hand combat,” he said. “We finally reached the Polo Field in Manila, our destination.”

It was at this point the 11th Airborne made a side expedition to rescue 2,000 civilian prisoners of war being held at the Los Banos POW camp–men, women and children.

“These prisoners had been living in wooden shacks in this camp for three years before we arrived,” Carrico recalled.

“They weren’t too sure about leaving their homes with us. We had to burn their shacks to get them to leave.

“We took them into downtown Manila to another prison compound where American troops provided them with medical attention and food,” he said. “Things were looking up for them after that.”

On March 1, Company-D went back into action. It attacked Mt. Bijang, a minor hill held by the Japanese south of Manila. All day long the soldiers in D-Company came under heavy enemy fire. Nineteen of the company’s men were killed or wounded in the attack on the hill. Four in Corrico’s platoon were hit, including himself. 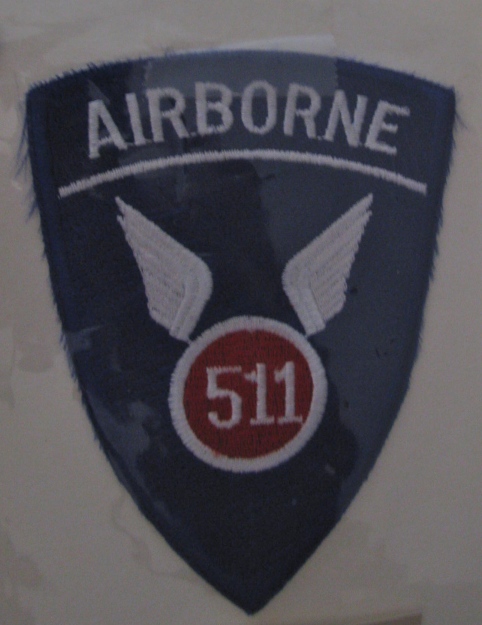 This 511 Parachute Infantry Regiment patch was worn by Carrico and the soldiers in this unit who fought in the Pacific during the Second World War. Sun photo by Don Moore

“I got shot in the shoulder and the right hand and I lost a finger,” the old soldier said. “I had been firing at the enemy when a Jap bullet hit my finger, ricocheted off my rifle stock and hit me in the shoulder.

“I was taken to a MASH unit and operated on. From there I was flown by Piper Cub to the docks on the beach, put aboard a boat and taken to a hospital ship off shore,” he said. “I ended up in a hospital somewhere in the Pacific where I spent several months recuperating. It took us three weeks to reach California by ship — the food was good and the nurses were pretty.”

Carrico took a train across country to Fort Meade, Md. where he was discharged from the Army in Dec. 1945.

“I went back to work for Western Electric as a phone installer. This was the company I was working for before I went in the service in 1941,” he said. I spent the next 30-plus years working for Western before retiring in the late 1970s.”

He and his second wife, Jane, retired to Venice in 2000. They have five children between them from previous marriages. Carrico’s children include: Andrew IV, Michael and Shelley. Jane has a son and daughter, Richard and Candace.

This story was first published in the Charlotte Sun newspaper, Port Charlotte, Fla. on Saturday, Jan. 3, 2014 and is republished with permission.

Click here to view Carrico’s collection in the Library of Congress.

*October 31, 1917 – October 13, 2016
Andrew Carrico III, 98, passed away peacefully at home on October 13, 2016. He was born 31 October 1917 in Washington, D.C. son of the late Andrew Carrico Jr and Esther Johnson.
Andy was a graduate of St John’s High School in Washington, D.C. where he was living when he was drafted into the Army in 1941. After Officer Candidate School he was promoted to First Lieutenant. In June of 1943 he became a paratrooper at Fort Benning, Georgia and served in the 511th Parachute Infantry of the 11th Airborne Division, commanded by MG Joseph Swing. At Camp Mackall, North Carolina he became a platoon leader of D Co.
A great many of the men who were assigned to him there went all the way through the action in Leyte and Luzon in the Philippines. After intensive jungle training in New Guinea, the 11th Airborne Division sailed into Leyte Gulf 22 Nov 1944. Andy’s platoon of thirty-five men were honed and ready to fight the Japanese. They got their chance! They came ashore on the beach at Leyte Gulf under heavy Japanese attack from the air. The outfit fought through that area, and headed up into the mountains where the Japanese were heavily fortified.
The mission was to advance across the unmapped jungle of the central mountains into the interior of the Island and make contact with the American 77th Division, which was to land on the western side of the Island near Ormoc – the enemy’s major reinforcement and supply base. Their Japanese foe was a fanatical enemy.
The awful, bloody battles fought on Leyte were regarded by the officers and men as the toughest of all the 11th Division fights.
The Regiment sailed from Leyte to Mindoro where they prepared for a combat jump on Tagaytay Ridge in Luzon, the most important position in Southern Luzon. They participated in the Battle for Manila, piercing the Genko Line, a strong Japanese defense fortification.
Andy and his men saw heavy action at Imus, which was heavily fortified by Japanese marines. They also were involved in a fierce battle for Mt. Bijang. A terrible toll was taken by his Company that day, and his men were superb fighters, as they had been throughout all of the action. Nineteen men were killed or wounded. Andy was hit by a Japanese machine gunner. He returned home and was retired with full disability.
Andy was awarded the Army Parachutist Badge, a Bronze Star with an oak leaf cluster, a Purple Heart with an oak leaf cluster, the Presidential Citation Unit Medal, the Philippine Liberation Medal, World War II Victory Medal, the American Defense Medal, as well as World War II Asiatic-Pacific Campaign Medal with Beachhead Battle Stars for the Pacific Theater. His most prized award was the Combat Infantryman’s Badge.
After his military service, Andy returned to civilian life and was employed by the Bell System in Arlington, Virginia, from which he retired in 1977. He married Jane Barnett in 1977. They have resided in Venice, Florida for a number of years. Andy loved his family, as well as his extended family, and has been a strong force in all of their lives.
Andy loved a good joke, a good game of cards, and dressing up in costume on his birthday, which just happened to be Halloween! He was a master bartender and the life of the party. He was a good friend to his Harrington Lake neighbors. A more loyal fan of the Maryland Terrapins would be hard to find. He was the rock of our family.
Andy was preceded in death by his first wife, Lois Lilly, a daughter, Janis, a son, Andrew IV, a sister, Esther Carrico Kinsman. He is survived by his wife, Jane Barnett, of Venice, a son, Michael and his wife Laura of Cumming, Georgia and a daughter, Shelley Ashby of Reston, Virginia. His grandchildren, Susan Ridolphi, Robyn Crowther and husband Bosley, Nicole Carrico, Christopher Carrico, David Ashby, and Heather Ashby. His extended family, Candy and Jeff Holm and their family who reside in Salt Lake City, Utah. Richard Compton and Carol Didonna of Roanoke, Virginia, Grandchildren Jessica Martin, her husband Nate and their children Izack and Trevor, Matthew Holm, Jeremy Holm, Linnea and Joe Tullis, all of Salt Lake City.
Viewing is scheduled for Tuesday, October 18th, 6 to 8 pm at Farley Funeral Home, 265 S Nokomis Avenue, Venice. Funeral Services will be conducted on Wednesday, October 19th at 11:00 am at Christ United Methodist Church,1475 Center Road, Venice, Florida 34292.