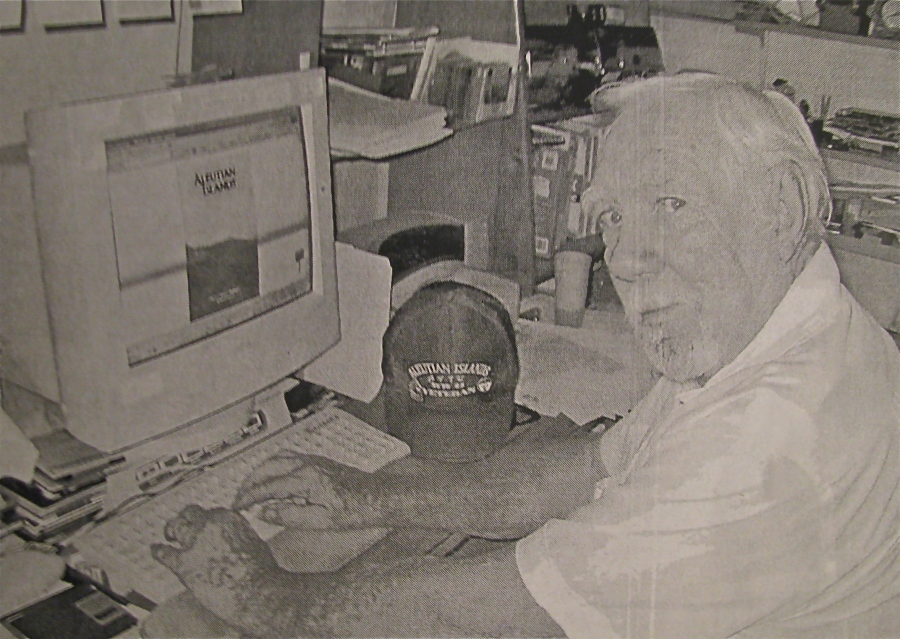 Retired Master Sgt. Frank Keegan of Port Charlotte, Fla., uses his home computer to search for items about the little-known Aleutian battle on Attu Island on May 29, 1943, 70 years ago. Sun photo by Don Moore

Almost a year after four Japanese Imperial Navy aircraft carriers were sunk at the Battle of Midway on June 4, 1942, the Japanese troops that went ashore at the same time on Attu Island in the Aleutians suffered a similar fate.

In a little known battle on a little known island at the end of the Aleutian Island chain, running from the Alaskan mainland into the Bering Sea, Master Sgt. Frank Keegan of Port Charlotte, Fla. saw his first action under fire during World War II. He was part of the 50th Engineering Battalion attached to the U.S. 7th Division. It was May 29, 1943, and he was freezing in a foxhole dug out of the island’s volcanic sand trying to keep his head down and stay alive.

The Japanese soldiers on Attu had been part of a much larger enemy diversionary effort a year earlier. They were attempting to convince American forces they were going to invade the Alaskan mainland instead of Midway Island thousands of miles to the south. It didn’t work.

The Japanese troops were stranded on Attu, after the enemy’s Battle of Midway disaster, cut off from their main force that had sailed into the Aleutians Islands the following year. Twelve months later, U.S. forces arrived with battleships and aircraft carriers supported by cruisers and destroyers to run the enemy off the island.

What they eventually discovered, after going ashore in force on Attu on May 11, 1943, was 1,000 starving Japanese soldiers who became fanatical during their last day of life. The enemy troops charged the well-supplied and well-fed American soldiers who killed them during a final bonsai attack or watched them blow themselves up with hand grenades.

“On May 29th the Japanese infiltrated our lines in the dark. We could hear them down below us. They were all happy as larks. It was like they were on yak juice or something,” Keegan recalled six decades later. “Then they did their bonsai charge. We were dug in above them on ‘Engineer Hill.’ By the time it was all over we had lost 17 men in our battalion.

“1st Sgt. Fred Lanners was in his foxhole that morning as it started getting light,” he said. “A hand grenade dropped right in the hole beside him. He picked it up and threw it out.

“Pretty soon here came another grenade. But this one didn’t make it to his foxhole. It landed up on the top near the edge of his hole. He reached up for the grenade. When he did it went off and tore up his arm. It also hit him in the face and head with shrapnel, but most of the grenade’s charge went up between his helmet and his helmet liner. His face was covered with blood, but he kept on shooting at the Japanese.

“Fred Lanners was a hell of a soldier. He was the best. The sergeant survived this engagement and received the Silver Star medal,” Keegan said. “I’ve spent more than 50 years trying to find him. I located him a while back, but he had just died.”

In the thick of it with Lanners was Keegan hunkered down in his own foxhole not far away.

“You tried to keep as low profile as possible. But when they got too close you wanted to keep them from getting any closer,” he explained. “They seemed to be primarily looking for something to eat. We either shot them or many of them blew themselves up with grenades.

“When the shooting was over and it became daylight we found 1,000 dead Japanese scattered all around,” Keegan said. “That was the end of it for the Japanese on Attu. We only took 14 prisoners.”

When the shooting stopped, their next problem was what to do with 1,000 dead Japanese scattered all around. The engineers scrapped a trench in the black sand with a bulldozer. They neatly lined up the dead enemy soldiers shoulder-to-shoulder in the trench, he said. As they were getting ready to cover the dead with sand another group of American soldiers pulled up with a trailer full of dead soldiers. They just dumped the contents of their trailer on top of the perfectly aligned Japanese and covered the whole bunch of them with sand.

Their primary job of the 50th Engineers during the invasion of Attu was to get all of the division’s equipment on the beach. The engineers brought the stuff ashore in Higgins Boats from ships waiting four or five miles off the coast.

His unit faced little Japanese opposition initially while coming ashore. That would come two weeks later when Keegan and his fellow engineers were up in the hills above the beach fighting off the enemy’s final assault.

For nearly two years, Keegan and half of the men in the 50th Engineering Battalion remained on the island. The other half of his unit was sent with the 7th Division to run the Japanese off Kiska, the next island in the chain closer to the Alaskan mainland. When the American forces arrived on Kiska they discovered the enemy had gone. The Americans were redeployed to the South Pacific.

But Keegan and those left on Attu remained until the war’s end.

“That first year we lived in 16-man pyramid tents. It wasn’t too cold up there, but the wind was terrible. At our weather station the wind reached 115 mph before it blew out,” he said. “The thing that really saved us from the cold was that our tents were covered in a snow bank all winter long. Each tent had a little cast iron stove for heat with a flue pipe that ran up through the center of the tent.”

By the next winter things had improved considerably. They were housed in Quonset-type huts they put together during the summer.

Fog was so dense in the attack on Attu that U.S. forces circled for hours before landing. The invasion was slated for 6:30 a.m. but some soldiers did not reach shore until 3:30 p.m. Photo provided

“We had one door in those huts we went in and out of. In the morning you would open the door and it would be solid snow. You’d have to dig your way out and put the snow in a bucket inside the hut until you could get out and dump the snow in the bucket outside.

“The biggest problem we faced on Attu were our boots. We went up there with regular Army issued leather boots that weren’t fit for cold, snowy weather like we had up there. If you got ‘Emerson-foot,’ because your feet got wet in those leather boots, it was terrible. Eventually they issued us boots with rubber bottoms and they were a lot better,” he said.

At the conclusion of the Second World War, Keegan had enough points to get out of the service early. For the next four years he was a civilian. When the Korean War broke out, in June 1950, he was recalled to service. He decided to make the regular army a career.

In 1967 he retired from the service after 22 years. During his military career he spent 10 years overseas, primarily in Europe and South Korea as well as his stint at Attu during World War II.

Thirty-six years ago he and his wife, Edna, moved into their Lindley Terrace home in Port Charlotte. Why did they move here?

“Sunshine,” the old master sergeant said with a smile.

This story was first published in the Charlotte Sun newspaper, Port Charlotte, Fla. on Friday, May 30, 2003 and is republished with permission.