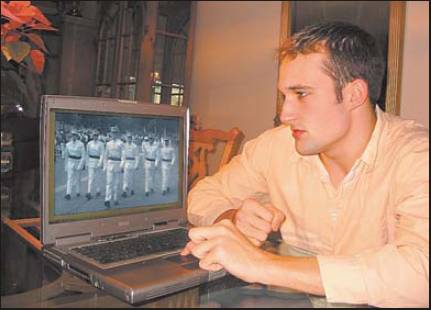 Bryan Coward looks at a photo of himself and other members of his junior year class at West Point. They’re in their summer dress uniforms marching at the head of a parade at the end of basic training. Bryan is second from left in the photo on his computer screen. Sun photo by Don Moore

Sgt. Bryan Coward is in an elite group. He’s part of a handful of local students attending one of the United States’ military academies.

Coward is midway through his junior year at West Point. He is a 2003 graduate of Charlotte High School in Punta Gorda, Fla. His parents, Tony and Sandee Coward , live in the Pirate Harbor subdivision south of Punta Gorda along Burnt Store Road.

The United States Military Academy at West Point is not something you just decide to attend. One has to be selected and pass a stringent entrance exam.

“If you’re going to attend West Point, you have to begin talking to them pretty early. In my junior year in high school I started communicating with them,” he explained while home on Christmas leave. “Eventually I got nominated by former U.S. Rep. Porter Goss (R-Sanibel). Goss is now director of the CIA.”

Why did Coward choose West Point?

“I wanted to do something different. I thought going to West Point and serving in the Army was really a great opportunity. It fit my personality and I got the leadership experience, too,” he said.

It wasn’t that Coward came from a military family. His father wasn’t in the military. His grandfather served in Europe during World War II, but never talked with any family member about his Army experiences.

Like hundreds of other young men and women who decide to attend West Point, Coward arrived at “Beast Barracks” at The Point in the summer of 2003. New arrivals are put through eight weeks of Army basic training with a bit of West Point culture thrown in for good measure.

“Physically I could handle Beast Barracks, but mentally it was pretty difficult. They play a lot of mind games with you. At the end of the eight weeks it was a pretty amazing feeling to know you survived,” he said.

“You have no privileges that first year as a plebe. You walk with your head facing straight ahead at all times and your hands are cupped,” Coward said. “At the table for breakfast, lunch and dinner you can’t talk, unless spoken to by an upperclassman. You serve the upperclassmen, deliver their newspapers and take out their trash that first year.”

Like almost everyone else who ever graduated from West Point, Coward has gotten his share of demerits.

“I got in trouble for some stupid things, like wearing a Lance Armstrong “Livestrong” bracelet against cancer in my sophomore year while in uniform. I was written up and walked hours with my rifle for that one.”

Robert E. Lee is the only West Point graduate who made the four years at the U.S. Military Academy without a single demerit.

The transition from high school to West Point is a jolt for all new arrivals. One thing that helped Coward was his experience on the Charlotte High School swim team. 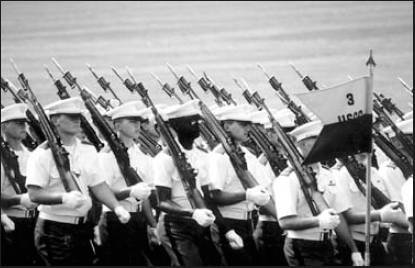 It was the newcomers’ first parade during their first day on campus. They paraded in uniform for their parents. Bryan is fifth from the left. Photo provided by Bryan Coward

“I was captain of the swim team my senior year at Charlotte High. We were ‘all county’ and ‘all state’,” he said. “What I did for four years on the Charlotte High School swim team prepared me well for West Point. I’m now on the West Point swim team.”

Life for Coward and his fellow classmates began to improve after their plebe year when they attended Army field training at Fort Buckner that second summer before the start of their sophomore year.

“By then you were something more than a plebe. When you returned to school the second year, your class was the one that took charge of the new plebe class,” Coward said.

This year his privileges increase a bit more as a junior. He served as parade drill sergeant at basic training during summer camp at Buckner.

Occasionally he and some of his buddies get a few days off. When they do, they may take in the sights of New York City, visit a friend at one of the nearby Ivy League colleges or just catch up on their sleep at West Point.

Coward is in the top half of his junior class at one of the toughest colleges in the country. However, he says calculus and physics are not among his favorite subjects. He does better in English and writing classes.

“I’ve learned to adapt to change, roll with the punches and come up with a better solution to a problem,” he said after more than two years of West Point training. “Lack of sleep is probably the toughest thing I’ve had to cope with. It seems that every year you get less and less sleep as you get more and more responsibility.”

The academics at West Point are tough, but not insurmountable.

With his camouflage uniform on, Bryan takes part in his second summer training maneuvers at the conclusion of his sophomore year at West Point. Photo provided by Bryan Coward

“They definitely give you the tools to succeed. The officers teaching you are outstanding. If you have the work ethic you’ll do well,” Coward said.

“The friends you make at West Point are for life. You go through the rough times and the good times together. You become real close to these guys and bond,” he said with conviction.

A steady girlfriend is something Coward is lacking. That, too, is a West Point tradition.

“Only 2 percent of the people who start off with girlfriends at West Point end up with them,” he said. “I’m in the 98 percent club — no girlfriend.”

Despite the grind of daily survival, despite the regimented life and the lack of female companionship, Coward maintains, “Being part of the West Point tradition, with all its culture, is like a brotherhood. If you graduate from there you’re part of something special. I have an advantage over my peers in regular college. I know exactly what I’m going to do when I graduate,” he said.

What he hopes to become is a second lieutenant in command of a rifle platoon in the U.S. Army at 22 after graduation.

After 10 years of service in the military he sees himself as a major serving as the executive officer of a battalion. As a West Point graduate, he will probably retire as a bird colonel and battalion commander if he makes the military his career. Coward could be the next Dwight Eisenhower, Douglas MacArthur or George Patton.

Cadet Sgt . Bryan Coward admits, “West Point has been a real challenge, but I wouldn’t want to be anywhere else.”

Being a West Point mom is awesome

It’s “pretty awesome” being a West Point mom. At least, that’s what Sandee Coward of Pirate Harbor says. Her son, Bryan , is a junior at the U.S. Military Academy at West Point.

“When I go out with my West Point sweatshirt on, someone always stops me and says, ‘You have a child at West Point?’

She says West Point wasn’t something Bryan spent a lot of time talking about when he was growing up. It was only when he was halfway through Charlotte High School that West Point became a topic of discussion around the Coward home.

Taking their son to the U.S. Military Academy for the first time was a moving experience for the whole family. The faculty put on a big presentation for the families in the auditorium at West Point. At the end of the affair, mothers and fathers, brothers and sisters were told they had three minutes to say good-bye to their soon-to-be West Pointer.

Bryan is flanked by his mom, dad and sister, Meredith, during a visit the family made to West Point. Photo provided by Bryan Coward

“Everybody stood up in the auditorium and the inductee hugged through his family and their child walks away,” she recalled. “The rest of the day, the families toured West Point and checked out the campus. There was a parade that evening and everyone’s son or daughter came marching by in their uniform for the first time. Thousands of parents were looking for their cadet that looks just like thousands of other cadets.

“It was the ‘Long Gray Line’ and when you found your kid in it, you let out a shriek. We went chasing after him, but he couldn’t look at us. He had to march with his head straight ahead. All that mattered was that you saw your child that evening. That was probably the most moving thing I’ve ever been involved in, in my whole life.

“It’s silly to look back on it today. There were some moms crying because they couldn’t find their child,” she said.

After graduating from West Point Coward spent five years in the Army to meet his military obligation. Three of those years he served in the war zone in Afghanistan and Iraq. He then transferred to the Army Reserve and he is currently working for Shell Oil Co. in New Orleans, La. He is in charge of the Perdido Oil Platform, the deepest offshore oil rig in the world.

This story was first published in the Charlotte Sun newspaper, Port Charlotte, Fla. on Saturday, Dec. 24, 2005 and is republished with permission.

Please click here to read another of Bryan’s interview from 2007.