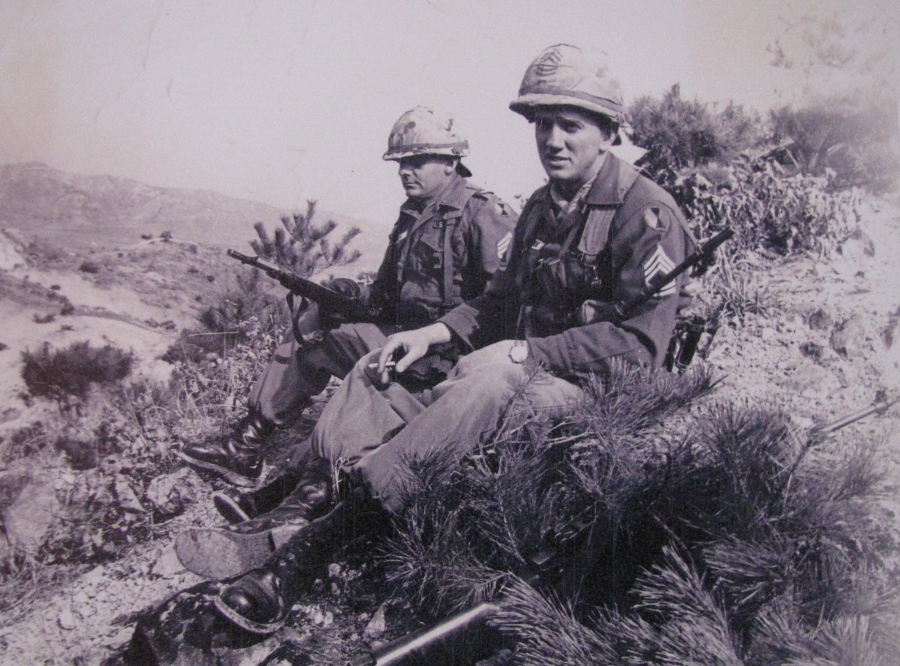 Dusek and a buddy hold a hill in Korea during the "Forgotten War." He and his unit spent a lot of time capturing and giving up a mound of dirt called "Kelly's Hill" near "Old Baldy." Photo provided. 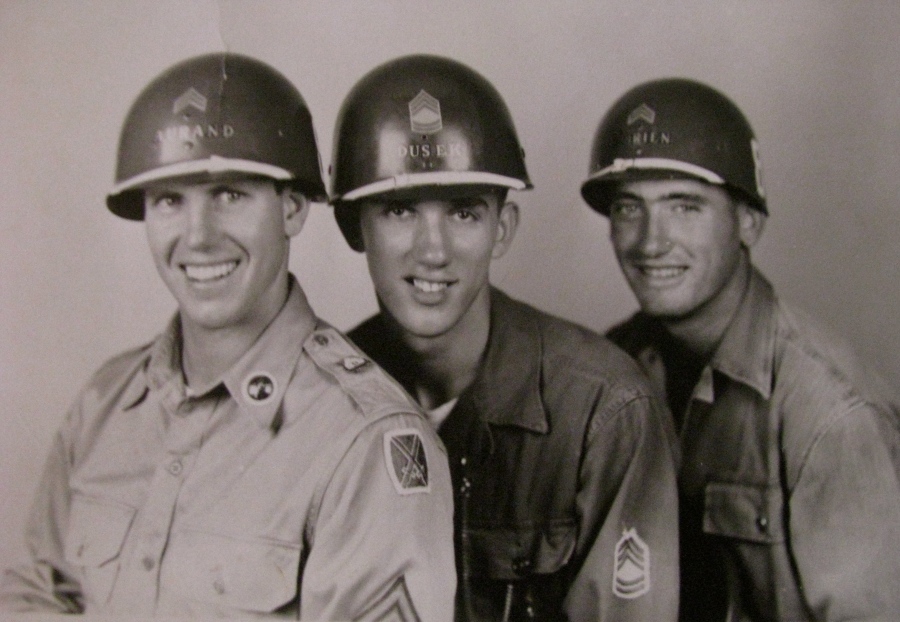 Sgt. Charles Dusek who served with he Third Infantry Division during the Korean War is pictured in 1953 when he returned from the war. He’s the sergeant in the center. Photo Provided

It was the middle of the Korean War, August 1952, when Charles Dusek enlisted the U.S. Army. He was 19-years-old at the time living with his family in Chicago.

“They shipped us from Fort Sheridan, Ill. via Flying Tiger Airlines to Oakland, Calif., put us on an aircraft carrier and sent us to Schoefield Barracks in Honolulu for basic training. When we got out of basic all of us were sent to the front lines in Korea,” the 81-year-old said.

“I ended up in Company E, 7th Regiment, 3rd Infantry Division. My division fought in the Chor Won Valley. Most of our battles were around Kelly Hill,” he recalled. “We played ‘King of the Hill’ with the Chinese and North Koreans. They took the hill and we take it away from them and then they take it back.

“I was a BAR (Browning Automatic Weapon) man in our unit. There were two BAR guys in each squad,” Dusek explained. “My first impression of the front line when we got there was that we were on a big hill that was covered by a camouflage netting to conceal our goings and comings from the enemy.

“Things on ‘Kelly Hill’ were real bad because we were being hit all the time by Chinese artillery. It was so bad we’d take the dead Chinese soldiers and stack them up in front of our barbed-wire to protect our lines. Then we’d have to go out and cover the bodies with lime.

“In the evening we’d come back from our front line position to the rear of the hill so we could eat. The Chinese knew this and they knew when we were eating. They’d shell us right then,” he said. “I remember I was sitting with my mess kit eating something and an enemy mortar round landed–BAM! We all jump and my mess kit went up in the air and there went my supper.

“The Chinese would attack at night. First we’d hear their bugles and see their flairs. Then they’d run toward our lines in waves,” Dusek said. “We’d fire everything we had at them and cut them down.

“I remember we were right next to a hill called ‘Old Baldy’ held by the 2nd Infantry Division. I’ll never forget those guys with their tank atop ‘Old Baldy.’ Those Chinese charged up the hill and those guys opened up on them with the 90 mm gun on the tank and just blast ’em off the hill.

“I remember Col. Jessie Drain, commander of the 7th Infantry Division, came to our front line position and looked around. There was no one left in our platoon but me and a couple of other guys. I was the ranking corporal.

“The colonel asked me what happened? I told him, ‘You can see what happened with all those dead Chinese out there in front of us.’

“He turned to me and said, ‘You’re now a sergeant.

“The fighting went on month after month. Nothing much changed except toward the end of my tour in Korea the fighting started slacking off a bit,” Dusek said.

“I came back from Korea unscathed, except for one time when we were on ‘Kelly Hill’ and the Chinese throw grenades at us. I lost my hearing. The next thing I knew I was on a hospital train headed back to the rear and then back to Japan.

“When my company went up on that hill we had 200 to 250 men. After a year up there a little over 50 remained. The rest were killed or wound,” Dusek recalled 60 years later.

“I was 20-years-old sergeant first class when I returned to Chicago. I thought the Korean War was a big adventure,” he said with a smile. “When I got home I married Dorothy, my high school sweet heart.

“I went to work for her father at his TV business for a year or so. One day I got this wild hair and went down to the recruiting station reenlisted. My wife could have killed me.”

By the time the Vietnam War rolled around Charles Dusek was a sergeant first class serving with the “Big Red One,” the 1st Infantry Division, along the Cambodian Border.”

It was 1967 and he had already gone to war in the Korea with the 3rd Infantry Division. He was married with four children when he went to war a second time.

“We did a lot of search and destroy patrols out in the bush,” he said. “We’d go out there and try and ambush the enemy and they’d do the same thing to us. 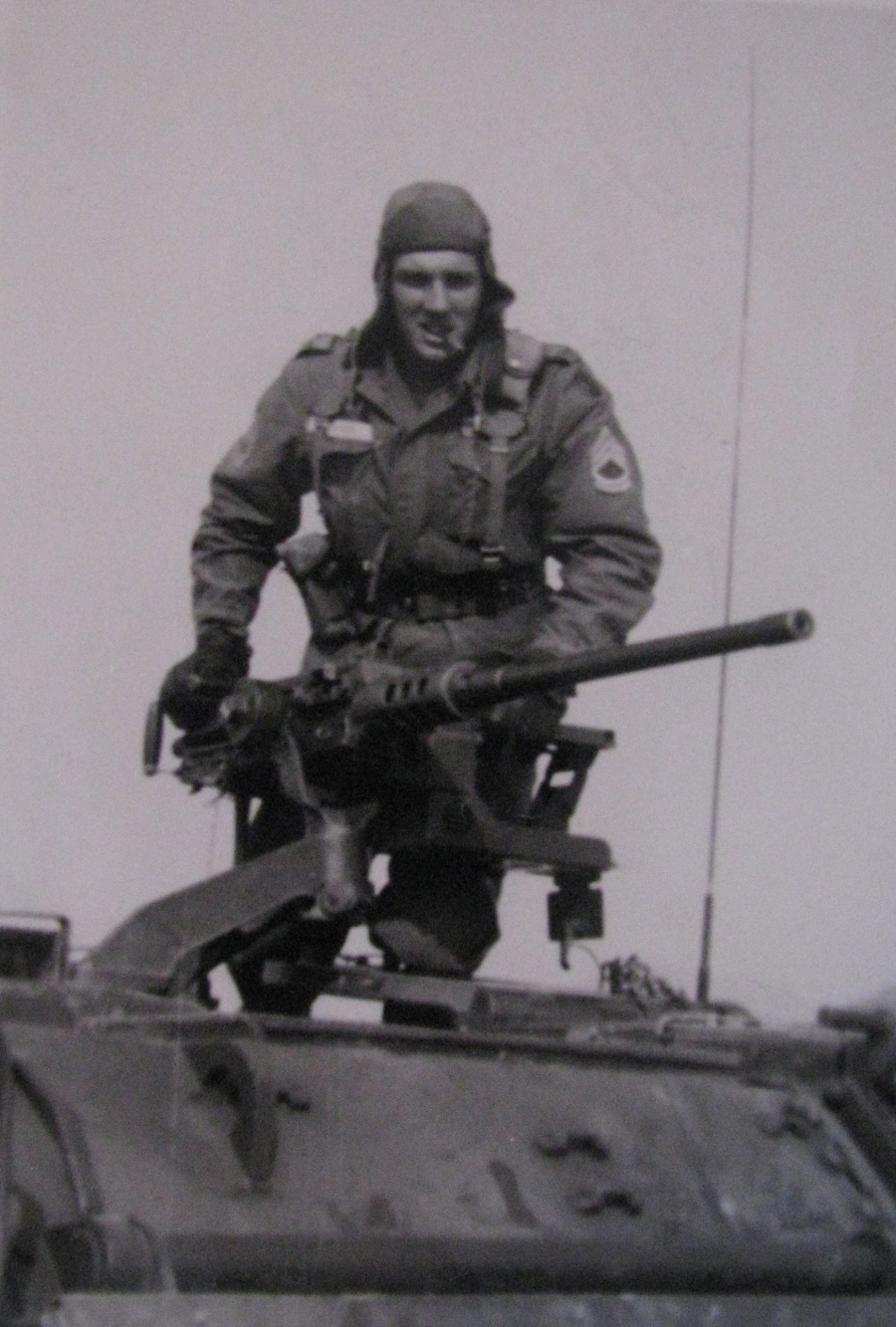 Sgt. Charles Dusek who served with the 25th Infantry Division during the Vietnam War is pictured atop an Armored Personnel Carrier with his .50 caliber machine-gun. He was a sergeant in Vietnam. Photo provided

“I was returning from a mission with an engineering sergeant. He called me over to check out a trip wire on the ground. He picked up the wire and 100 feet away a Vietcong (insurgent) was standing there. He popped it and the mine got us both.

“I was lying there on the ground when one of my privates runs up and says, ‘Sarge, that wound is so bad I could stick my fist in there!’ I wanted to jump up off the ground and smack him.

“The other sergeant that was standing there with me had both his legs broken from the blast and he was cut up pretty bad,” Dusek recalled. “They evacuated us to the 20th General Hospital in Japan.

“I was waiting to go into surgery and there was ‘Hawkeye’ and ‘Pierce’ (from TV’s M*A*S*H) on both sides of my gurney. One of ’em asked me if I wanted to go to sleep or if I wanted a local anesthetic.

“One said, can’t do. They put a towel over my had and gave me a local anesthetic. I didn’t feel anything from the waist down, but I could hear the two of them talking.

“‘Hawkeye’ said to ‘Pierce’ how many stitches you got?

Dusek spent the next five months in the hospital recovering from his wounds.

For a short while after being released from the hospital he worked as an ROTC instructor at a Phoenix, Ariz. high school. After that he made a second tour to Vietnam. He was assigned to the 1st Infantry Division.

“I was the sergeant in our company and we were returning with our APCs (Armored Personnel Carriers) from Charlie Company when the battalion commander, who was in our APC, stopped the caravan. The colonel had seen a skull and cross bones sign–signifying an enemy mined area.

“He wanted to go investigate. He thought the VC had probably put the sign up there to deceive us. I jumped off the APC and when I did the colonel followed behind me with the operations officer.

“I took a step and stepped on a mine. It blew up under my foot. I tried to shield them from the blast. We all ended up on the ground hurting.

“My adrenaline was pumping and I managed to crawl back to the track and tell the operator: ‘Get as many bandages down here as you can.’ I tried to bandage them up.

“A little Loach helicopter was circling overhead. He saw what happened on the ground. He landed and flew me to a MASH hospital near by.

“The surgeon said to me: ‘You’re banged up pretty bad. But we’re gonna fix you up.’

“Part of one finger was hanging off.

“‘Do you use this finger?’ the surgeon asked.

While telling his story to me 30 years later Dusek said, “He saved most of it.”

He wiggled his short finger and smiled.

“It took me six months to recover from my injuries. I was sent to Letterman General Hospital in San Francisco. My wife told me before I went to Vietnam, if I was wounded again she wanted me to be treated at Balboa Naval Hospital near Chula Vista, Calf. where she was living with our children.

“When they took me into surgery the surgeon said to me, ‘Why don’t you like us at this hospital?’

“I told him I didn’t dislike him or the hospital.

“‘Well, your wife wrote a letter to President Nixon asking that you be placed in Balboa Naval Hospital.’

After 20 years of service in the Army Dusek retired a sergeant first class at Fort Lewis, Wash. He is presented his
retirement papers by the commanding general of the post in 1971. Photo provided

“I didn’t get relocated to Balboa, but I got passes all the time that allowed me to fly home to Chula Vista.”

“My last tour of duty was ROTC commander at Gonzaga University in Spokane, Wash. I retired from the Army after serving 20 years and 26 days.

“It wasn’t long after that, I got a call from the Army. I became the ROTC commander at Carl Hyden High School in Phoenix, Ariz. I stayed there five years.

“At age 50 I decided to go to college and get a degree in Elementary Education. When I got out of school I taught science to junior high school kids at Pine Strawberry Elementary School in Payson, Ariz.

“I set up a science program at the school and my wife, Dorothy, became my lab assistant. We taught science at the school for the next 10 years.”

Eventually the Duseks retired and toured the country for the next decade. They’ve seen some 30 states in their 100,000 mile odyssey.

They have four children: Susan, Cindy, Candy and Larry.

AWARD OF THE SILVER STAR

Reason for gallantry in action: First Sergeant Dusek distinguished himself by heroic actions on 8 January 1970,
while serving with Headquarters and Headquarters Company, 1st Battalion, 5th Infantry in the Republic of Vietnam.

While on a combat operation, elements of Headquarters Company came upon a heavily booby trapped area. While the element was attempting to maneuver through the perilous area, a booby trap was detonated, seriously wounding Sergeant Dusek.

Sergeant Dusek was in a position as to shield the battalion commander and the battalion operations officer from the full force of the blast. His valorous actions saved the lives of the two of his comrades at the risk of his own life. Sergeant Dusek’s bravery and devotion to duty are in keeping with the highest traditions of the military service and reflect great credit upon himself, his unit, the 25th Infantry Division, and the United States Army.

This story was first published in the Charlotte Sun newspaper, Port Charlotte, Fla. on Monday, November 25, 2013 and Wednesday, Nov. 27, 2013 and is republished with permission.