This was Pvt. John O'Donnell when he got out of basic at Parris Island. He was 19 years-old. Photo provided

This was Pvt. John O’Donnell when he got out of basic at Parris Island. He was 19 years-old. Photo provided

Guadalcanal was where the Japanese were stopped in their westward advance by American air, land and sea power. Former Marine Pfc. John O’Donnell, 84, of Holiday Park in Englewood, Fla. was a tiny part of that historic Pacific invasion.

The battle began on Aug. 6, 1942, and continued for seven months during the early part of World War II.

“We came in on Higgins boats. The last 100 yards, we ran ashore with fixed bayonets and backpacks. Mike Landor, my best buddy in the Marines, was right beside me. He was from Cohoes, N.Y.

“Mike and I were going along and pretty soon we heard a shot. It was pretty close to us so we ducked down behind a coconut palm wall,” O’Donnell recalled. “We heard (the Japanese) were sneaky. Sure enough, one was sitting on top of a palm tree shooting down on us.

“‘Where you gonna get the beer?’ he asked.

“Pretty soon I saw movement in one of the palms. I shot at it with my .30-06 Springfield, the best damn rifle ever made. When the jap hit the ground he was dead.

“Mike got a couple of beers out of my pack for the two of us. We were sitting there relaxing with our beers. I looked over at the Jap  and told Mike, ‘You know what, I just killed somebody. I never killed somebody before. I didn’t even known him.

A few days into the invasion of Guadalcanal , the U.S. Marines who stormed ashore found themselves abandoned on the enemy-held island.

Adm. Bull Halsey, the fleet commander, had to pull his ships out of the fight because a superior Japanese fleet was headed his way.

“We were stuck on Guadalcanal without much of anything. We lacked ammunition and had very little food and water,” O’Donnell said. “We knew the Japanese had food so we started attacking them to get food to survive. We ended up eating fish heads and rice we took from the enemy.” 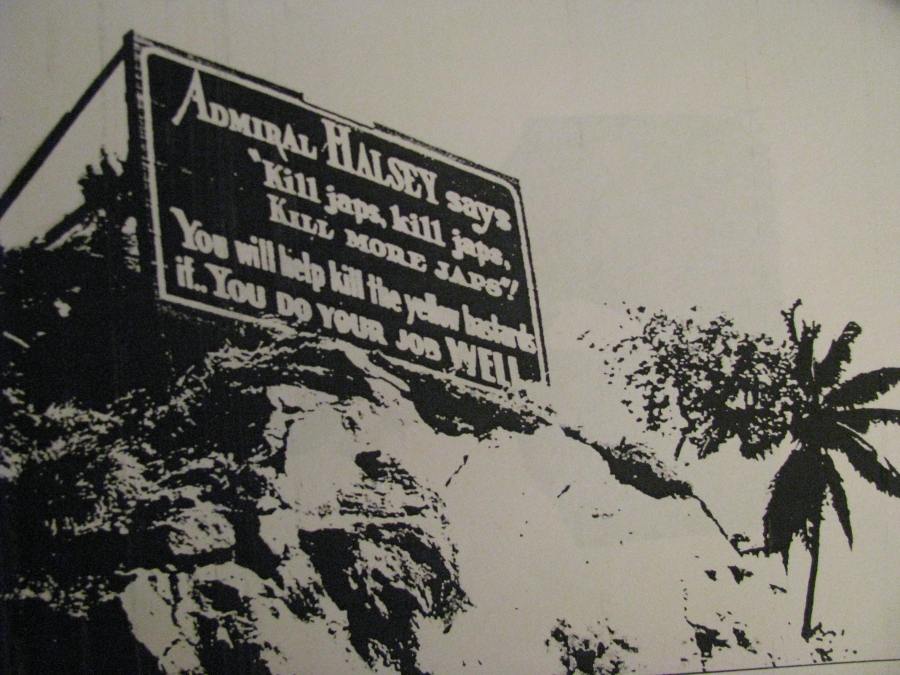 Adm. Bull Halsey had a theory about what to do with the Japanese. He was the naval commander at Guadalcanal, O’Donnell’s first major battle during the second World War. The sign was along the canal that led to the American PT boat base near Guadalcanal. Photo provided

At the same time, the Marines were pushing  into the enemy-held island and getting closer and closer to the the airfield near the middle of the island. This was their prime target on Guadalcanal .

O’Donnell’s unit, the 5th Marine Anti-aircraft Battalion attached to the 1st Marine Division, was given the job of protecting the west end of the island from Japanese aircraft and the enemy invasion fleet. On the point, they set up their 155-millimeter cannons, 3-inch, 20-millimeter antiaircraft guns and .30- and .50-caliber machine guns.

His unit was attacked regularly by carrier aircraft from the Japanese flattops offshore. For three weeks or more, the battle involving the offshore enemy fleet and the stranded U.S. Marines raged.

O’Donnell and his anti-aircraft and coastal artillery unit relocated to Tulagi Island about 10 miles from Guadalcanal. It was only a couple of miles long and a quarter-mile wide.

Although casualties were high on both sides, American forces had most of the Japanese cleared from Tulagi in a couple of weeks. The island was eventually used as a supply base by U.S. forces.

On one end of the island was a deep water channel and a cave that had an entrance leading out into the open ocean. It was a perfect PT Boat base.

It was from Tulagi that O’Donnell and the Marines of the 5th Marine Anti-aircraft Battalion had a ringside seat for the Battle of the Coral Sea. This was the first major sea battle in which enemy airplanes attacked each others’ ships without either carrier seeing its enemy.

“It was during the Battle of the Coral Sea that the Japs on Guadalcanal made their last effort to retake the island. They died doing it,” he said. “We were still in Tulagi and we saw some of our ships were blowing up and we saw some of their ships blown up or torpedoed, too. Bodies so badly burned you couldn’t tell who they were washed ashore after the sea battle.”

After successfully completing their mission at Guadalcanal, O’Donnell and his unit moved on to Tarawa, where they served as backup for the invasion force. Lucky for them, they never had to go ashore.

Tarawa was a tiny speck of an island, but it cost a lot of American and Japanese lives. It was one of the few Pacific island invasions that hadn’t first been checked out by U.S. frogmen before the invasion forces hit the beach. As a consequence many Marines got stuck in their landing crafts on offshore reefs and were blown to bits by Japanese mortars.

His unit also took part in the invasion of Saipan, another major Pacific battle.

“We had a hard time getting in there because the Japs were looking down on us from a mountain range. After taking the high ground, we started our sweep north and south. The enemy ran out of ammunition and 3,000 Japanese soldiers jumped off the cliffs on Saipan rather than surrender,” he said.

It was on to Guam. The Japanese began to fall back farther and farther inland. Initially it looked like a walk in the park.

“Then all hell broke loose. The Japs came out of every hole and from behind every rock and counterattacked. By evening they had pushed us back down to where our feet were in the water again,” O’Donnell said.

The Marines held and recaptured the lost ground.

“By this time I was thinking, ‘There’s not many of us original guys left. I wondered when my turn was coming,” he said. “I had had too much war. I got so I couldn’t do my job, so they put me in the hospital.”

The new battalion colonel realized O’Donnell was suffering from battle fatigue. It was August 1944 and the Marines in his unit had been fighting continuously for two years in several of the major battles in the Pacific theater.

A short while later he found himself in the Aieau Naval Hospital in Pearl Harbor, Hawaii. From there he was flown to the Great Lakes Naval Hospital for recuperation.

John O’Donnell who served with the 1st Marine Division at Guadalcanal, holds a patch he recieved for his service during that historic battle. Beside him is his Marine coffee cup. Sun photo by Don Moore

After a 30-day leave and a posting to the hospital at the Philadelphia Naval Yard, he was released and sent to Washington, D.C.

O’Donnell was to be officially discharged from the U.S. Marine Corps on April 12, 1945.

Unfortunately for him and the rest of the free world, that was the day President Franklin Roosevelt died. All leaves and discharges were temporarily canceled.

Four days later Sgt. John O’Donnell found himself taking part in his last official duty in the Corps. Like thousands of other servicemen, he lined the route in his full Marine dress uniform for the president’s funeral parade. Then he went home to stay.

This story was first published in the Charlotte Sun newspaper, Port Charlotte, Fla. on Sunday, June 10, 2005 and is republished with permission.