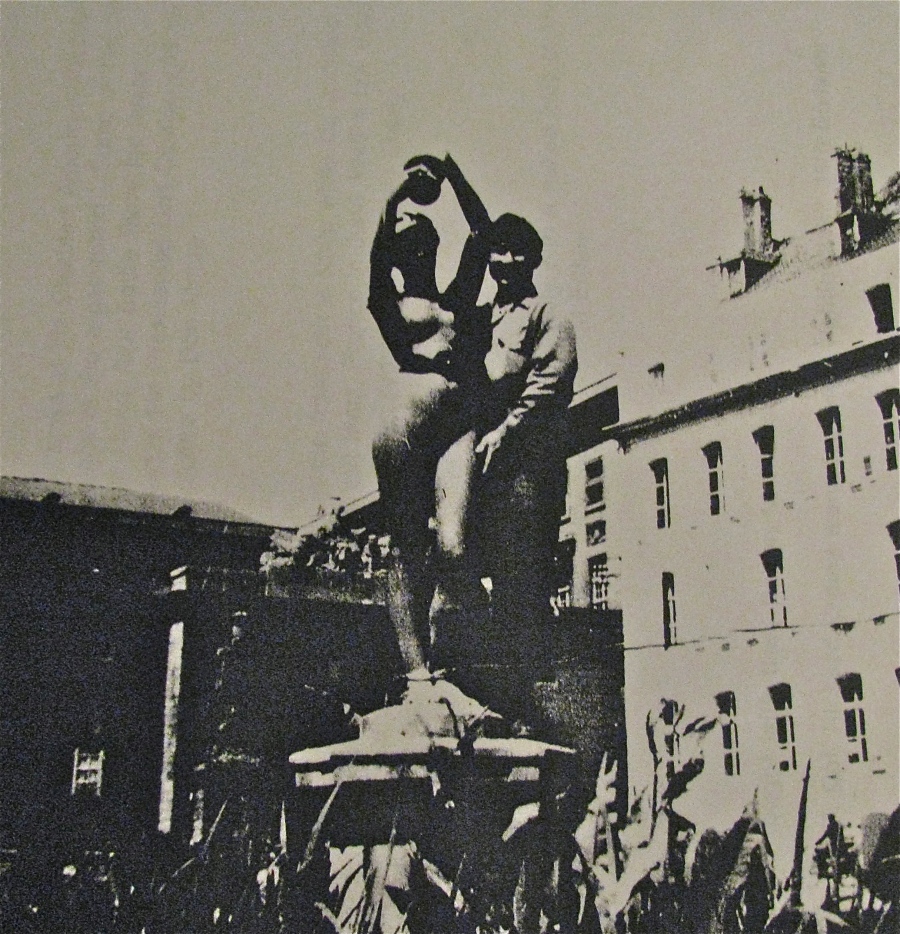 Erdley gets up close and friendly with a naked lady at Metz while taking a little R and R. Photo provided by Richard Erdley 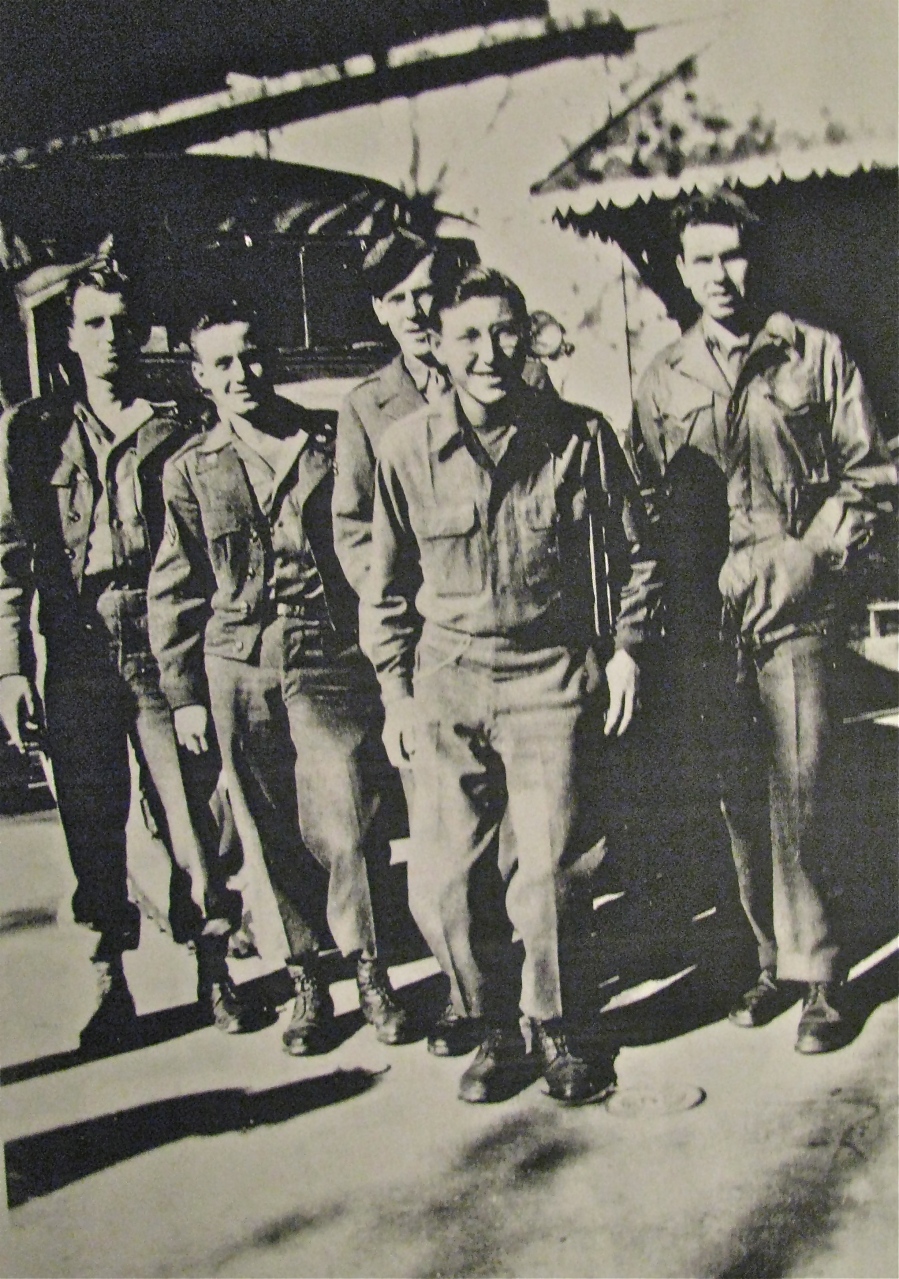 Pfc. Richard Erdley stans in the front with a smile while his buddies stand behind. They are about to check out Metz, France in June 1945 a few days after the end of World War II in Europe. Photo provided by Richard Erdley

Pvt. Richard Erdley was a member of the 35th Infantry Division, part of Gen. George Patton’s 3rd Army, in World War II. He was wounded at the battle for Nancy, France shortly after the general’s 3rd Army began to push the Germans into Germany during the final assault of the Second World War.

Like millions of other young American soldiers, Erdley joined the Army immediately after graduating from high school in his hometown of Cleveland, Ohio. He landed with the 35th on Omaha Beach in Normandy, France, two months after D-Day and caught up with the rest of the 3rd Army at the Gramercy Forest outside Nancy.

“Just before Nancy, Gen. Patton ran out of gas. He and his army remained there for weeks,” Erdley said. “The only time I saw him was there near the front lines.

“We had taken Nancy and our division moved back to a rest area for a couple of days. It was a place where we could take showers, get new uniforms and take it easy for a little while until we went back up on the front lines,” he said. “Patton came down the road on the lead tank sitting on its 90 mm main gun. He had his shiny helmet on and was wearing riding pants, highly polished boots and had on two pearl-handled pistols.

“The general jumped off his tank and said, ‘How are you boys doing? Are you getting your showers and clean clothes? Let me see your guns.’

“He looked at our guns then added, ‘Keep those guns clean, that’s your life.’ He was deadly serious.

“He wasn’t a very big guy, but boy, you knew he was in command.

“Just then Cookie, the guy with the food, came up to where we were with a hot meal in cans in the back of a truck. Everybody got their mess kit out and got in line.

“A colonel, Gen. Patton’s adjutant, suggested to the general, ‘Go to the front of the line.’ The general told him, ‘I’ll stay in the back of the line and talk to the boys.’

“At that point the Germans lobbed over three 88 artillery rounds that landed near us. Everybody rushed to get under the tanks for protection. Everybody but Patton.

“‘General get under the tanks!’ his adjutant yelled at him. ‘Oh no, it’s not my time. I’m getting my chow’ he told the colonel.

“Cookie was hiding under the tanks with the rest of us. The general yelled, ‘Cookie get back up here and give me some food.’ The cook came out from under the tank as ordered and filled Patton’s mess kit with chow.

“Patton nonchalantly walked over by one of his tanks, sat down on it and ate his food. When he finished eating he gave his mess kit to the colonel,” Erdley said. “That made a big impression on our troops.”

The general then climbed back up on the lead tank and yelled, “Let’s go.” Patton headed on down the road aboard the tank with the other two Sherman tanks following behind.

“On Nov. 8, 1944, he started his big push toward Strausburg, Germany. He wanted to chase them back toward the Rhine River and back into Germany.

“Three days later, on Nov. 11, Armistice Day, I was wounded by shrapnel from a German 88 artillery shell,” the 80-year-old Englewood man said. “All of a sudden, something hit the bottom of my shoe. I didn’t know what had hit me. 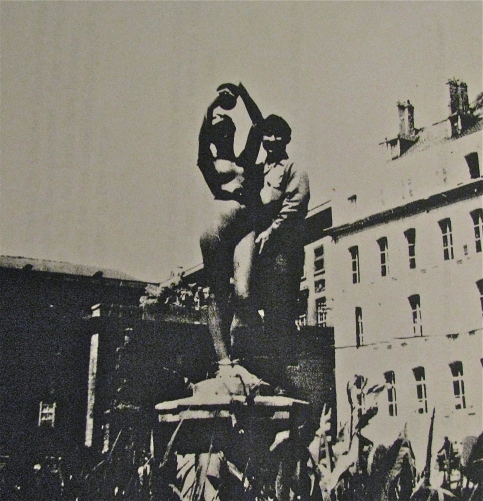 Erdley gets up close and friendly with a naked lady at Metz while taking a little R and R. Photo provided by Richard Erdley

“We were in the woods carrying a radio back to the front lines. The Germans lobbed a couple of 88 mm shells our way. When they went over they sounded like a train,” Erdley recalled. “When the projectiles hit the ground you tried to crawl inside your helmet. Afterwards we got up and kept right on going.

“A short time later my platoon sergeant said to me, ‘Erdley, what have you been doing? Have you been going around cutting off German’s ears and sticking them in your pocket?’

“I assured him I wouldn’t do anything like that.

“‘Well,’ he said, ‘You’re bleeding in your pocket. You’ve got to get back to the hospital and get taken care of because in 24 hours that shrapnel wound will poison you.’

“Blood was oozing out of my pocket, but I couldn’t feel anything,” he said.

“In a few minutes the Red Cross Jeep came up. It took me back to the hospital. They took a plug of shrapnel out of my thigh about as big around as your thumb.

“At the same time my feet were frozen. When I went to take off my shoes my feet just swelled up. I was suffering from trench foot.”

Erdley spent the next several months recovering in Allied hospitals in Paris and England. Then he was put on limited duty and sent back to Metz, France, which the U.S. Army used as a supply base. He was involved in shipping food and equipment by rail out of there to the front line troops for a few months. 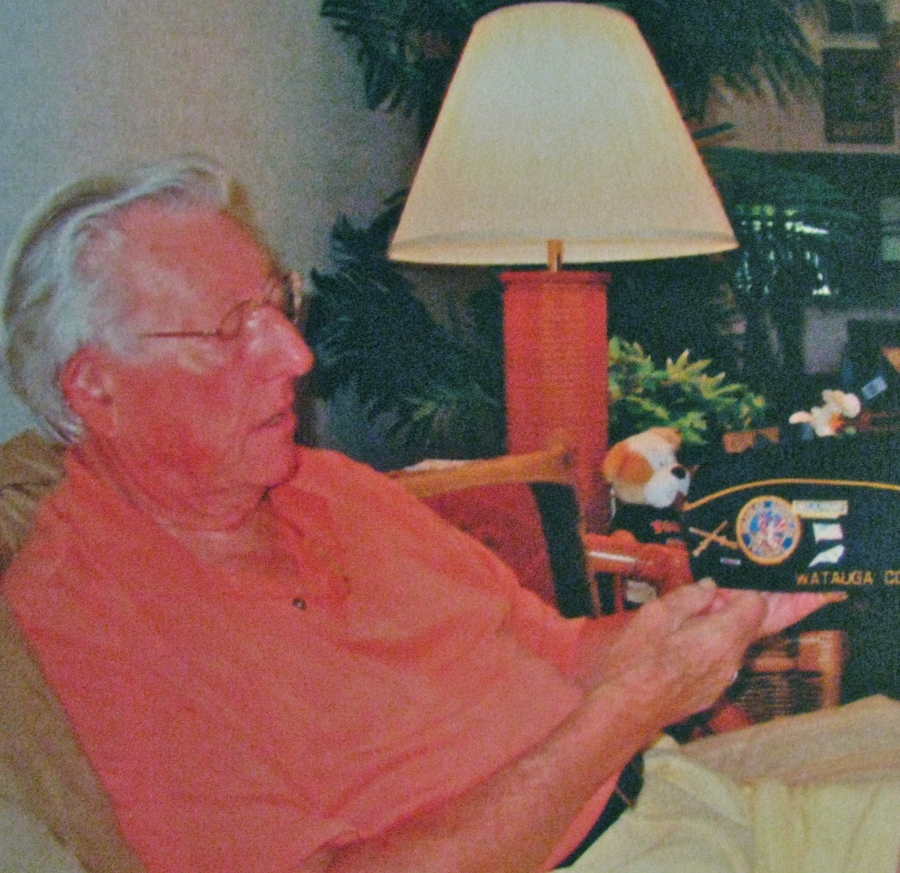 “While there, our boys liberated the nearby German Buchenwald concentration camp. The survivors began coming into Metz after they were released,” he said. “They were like walking skeletons. I’d never seen anything like it in my life. It was awful to see, but I’ll never forget it.”

By then, Cpl. Richard Erdley had enough points for a boat ride home. Like hundreds of thousands of other American soldiers, he ended up in Camp Lucky Strike at Le Harve, France. He caught a troop transport to the States and arrived back in New York Harbor on Feb. 16, 1945.

The War in Europe was less than 90 days from being won. Allied forces had six months more of hard fighting in the Pacific against the Japanese. They called it quits after we dropped two atomic bombs on them in June 1945.

This story was first published in the Charlotte Sun newspaper, Port Charlotte, Fla. on Sunday, Nov. 28, 2004 and is republished with permission.