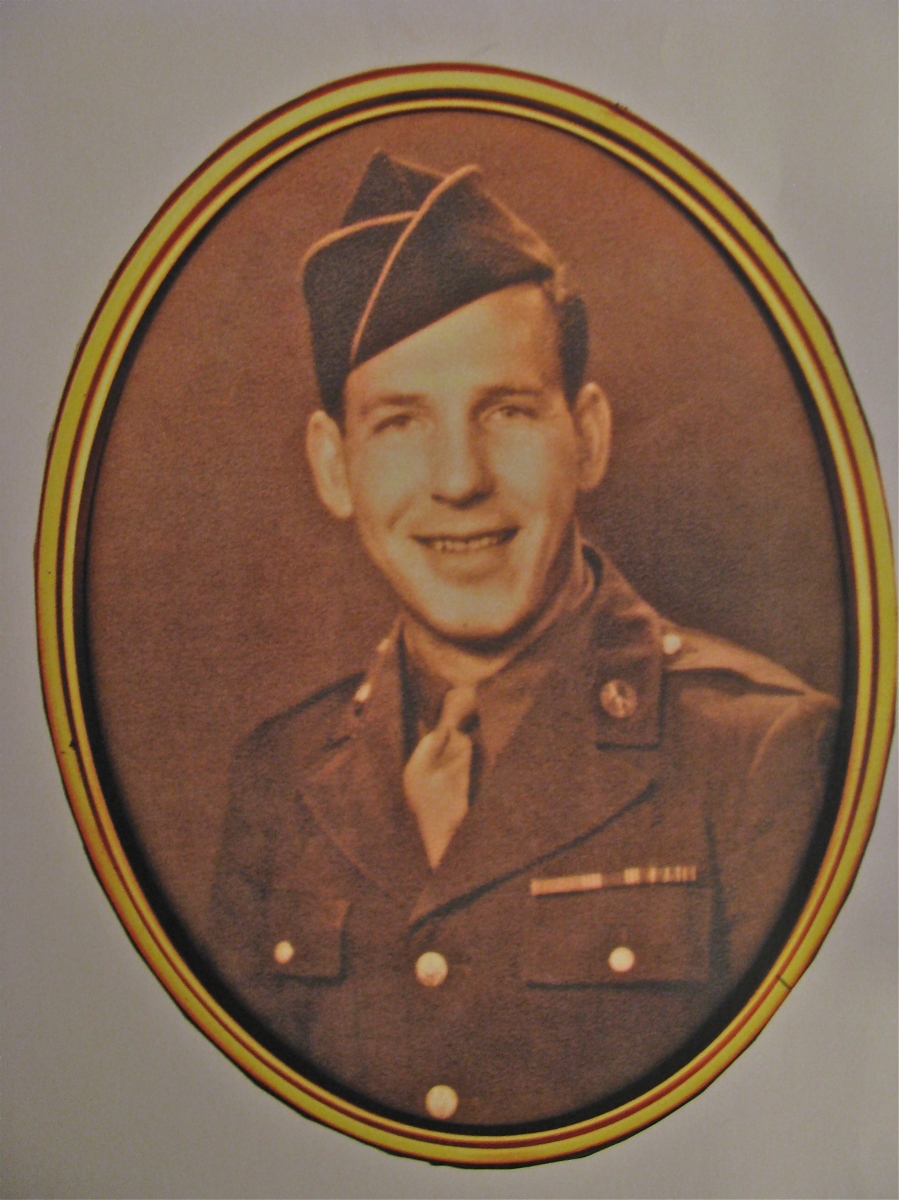 Sgt. R.J. Revell served in the 5th Army in Europe in the Italian Campaign during World War II. He was 20 years old when this photo was taken. Photo provided

Although he was in some of the toughest battles in the Italian Campaign during World War II, he never fired his rifle or used his gas mask.

His job was to produce a two- to three-page daily intelligence report on the German’s military capabilities. It was distributed to 30 or 40 members of the 5th Army’s top brass.

“I put it in an enveloped stamped ‘Top Secret,’ and then I put it in another envelope marked ‘Confidential’ so nobody knew that inside the second envelope was ‘Top Secret’ material,” Revell said.

When he arrived in Italy at Salerno, the Germans controlled the high ground and the American invasion force was in a tough fight for control of a small section of beachfront property.

“The Germans were about to push us back into the sea. They would have if it hadn’t been for the U.S. Navy,” the old soldier said. “They brought our battleships in close to shore and pumped shell after shell into the Germans that held them back.

“We had to stay aboard ship for four days off the beach at Salerno before we could go ashore. Every night at midnight the German planes would fly over; you could set your watch by it,” Revell recalled. “They would drop flares and then bombs. Our headquarters ship had a lot of antennae on it and was easily recognizable.

“She was the Ancon. It had been a pleasure ship before she became our headquarters ship. The Ancon was built in 1914, the year I was born. She was the first ship to go through the Panama Canal,” he said.

“After taking Salerno, we went into town on Army trucks without canvass tops. They told us to wear our helmet liners, but we didn’t know why.” Revell said. “All of a sudden something started pecking at our helmet liners. Girls in second floor windows were throwing hazelnuts on as as we passed by in the trucks below. People along the sidewalks were waving and cheering as we went by.”

After taking Salerno, the 5th Army and Revell’s headquarters unit moved on to Naples.

When they got to Naples, they set up their headquarters on the palace grounds above the city on a hill.

“The Germans kept after our ships in the harbor. They weren’t after us. Our ships started pumping their shells into the German lines,” he said.

By this time he had received the Legion of Merit. Lt. Gen. Mark Clark, 5th Army commander, pinned the medal on his chest. A picture of the event was captured by a photographer for The Associated Press and it appeared in his hometown paper in Yazoo City, Miss.

The accompanying commendation reads in part: “Master Sgt. Jeptha Revell, headquarters 5th Army, for exceptional and meritorious conduct in the performance of outstanding service as Acting Chief Clerk G-2 Section. Master Sgt. Revell’s duties were performed under trying conditions. His safe guarding of secret documents was in keeping with the highest traditions of the military service.”

After Naples he and his company commander, Capt. Fischer, took a trip to Rome.

Once more, his unit set up headquarters on the palace grounds in Rome. Rome was an open city so they hadn’t had to fight their way in.

They were only there a short while before taking part in the Anzio invasion further up the beach. Gen. Clark was trying to relieve pressure on Allied forces trying to capture Monte Casino, a Medieval abbey that topped the hill for which it was named.

“Anzio was kind of a stalemate for a couple of months, but we finally penetrated the German defenses and got off the beach. Again, the Navy helped a lot,” he said.

From there they went to Florence, where Revell fell in love. I asked him what happened in Florence and the old “foot slogger” summed it up in a word — “Girls!”

He and his buddy went into town with their dirty laundry crammed into pillowcases.

“As we were passing by this butcher shop, we were hailed by a man who told us he had someone who would do our laundry. Then he took us upstairs to the family apartment over the shop and introduced us to his two beautiful 20-year-old daughters.

“The papa pointed to the blue-eyed blond and said, ‘This one is taken.’ Then he introduced me to the brunette who was equally pretty and said, ‘Her name is Lia.’”

Special recognition: Gen. Mark Clark, commander of the 5th Army in Europe during World War II, pins the Legion of Merit on Master Sgt. J.R. Revell’s chest at a ceremony in Salerno, Italy, for a job well done. The old soldier, who lives in Englewood, Fla. holds a board containing the newspaper clipping and commendation. Sun photo by Don Moore

Because Revell had been in the service so long, he had a month’s leave coming. Instead of taking it around Florence and wooing Lia, he decided to use the time to go home to Yazoo City and show off his uniform.

“When I returned to Europe two months later, I brought her a box of chocolates,” he recalled. “I think her family thought I would marry her and take her to America. A lot of times I wish I had, because when I got back to the U.S. the girl I had been going with had married someone else.”

A short time later Revell and the 5th Army moved on. He never saw Lia again, but he never stopped thinking about the beautiful brunette he left behind in Florence so long ago.

By this time the war in Europe was almost over. Mark Clark’s 5th Army had relocated to the Lake Garda area, a posh resort in northern Italy along the foothills of the Alps. Revell and his unit were housed in a villa along the lake. He got to sleep in a bed for the first time in years.

From there he took a freight train down to Naples and spent a day exploring the Isle of Capri, 25 miles off the Italian coast. While there he visited the Blue Grotto while waiting for a ship home.

“That was really something. When you got in there the water was inky blue. You’d stick your hand in the water and it turned blue, too,” he said.

Two weeks later the transport on which he came across the Atlantic sailed into Chesapeake Bay. V-E Day had come and gone and a few days later the Japanese surrendered. World War II was over.

When Master Sgt. J.R. Revell walked in the front door back home in Yazoo City, his brother, who also served in Europe during the war, was sitting in a rocking chair on the porch.

“‘What took you so long?’” he inquired as he looked up from his chair at J.R.

This story was first published in the Charlotte Sun newspaper, Port Charlotte, Fla. on Wednesday, Sept. 28, 2005 and is republished with permission.