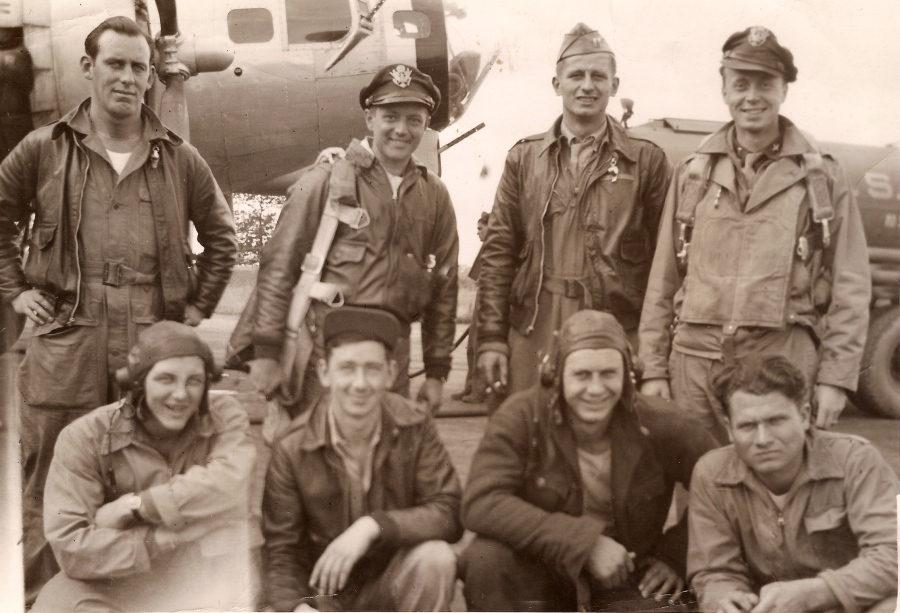 The crew of 'Lili of the Lamplight,' a B-17 bomber based near Ipswich, England was part of the American 8th Air Force. Lt. Ernest Erickson, pictured sanding at the far right, piloted the four-engine, heavy bomber. Photo provided by Mark Erickson, his son

Ernest Erickson flew a “Flying Fortress,” four-engine bomber dubbed “Lili of the Lamplight,” from a base near Ipswich, England on 35 combat missions over Nazi-occupied Europe in 1943 and ’44 during World War II. It was one of thousands of B-17s flown by the 8th Air Force that devastated Germany.

His son, Mark, who lives in Oakland, Calif. sent me an e-mail containing a set of pictures and other items about his late father’s experiences during the Second World War. The compelling nature of what he e-mailed resulted in this “War Tale.”

Because he looked like Lindbergh, his bomber crew called him “Lindy.” Ernest died June 7, 2013 at 90. This is his war tale.

His hometown newspaper, The Bismarck Tribune in North Dakota, ran this headline Oct. 5, 1944 above his story: ‘“Lili of the Lamplight’ Was Lucky Lady, Pilot Says.’

“I wasn’t so scared the first time we ran into … (flak), but that was because I didn’t know what flak could really do,” said Lt. Ernest A. Erickson, home on leave was quoted as saying. 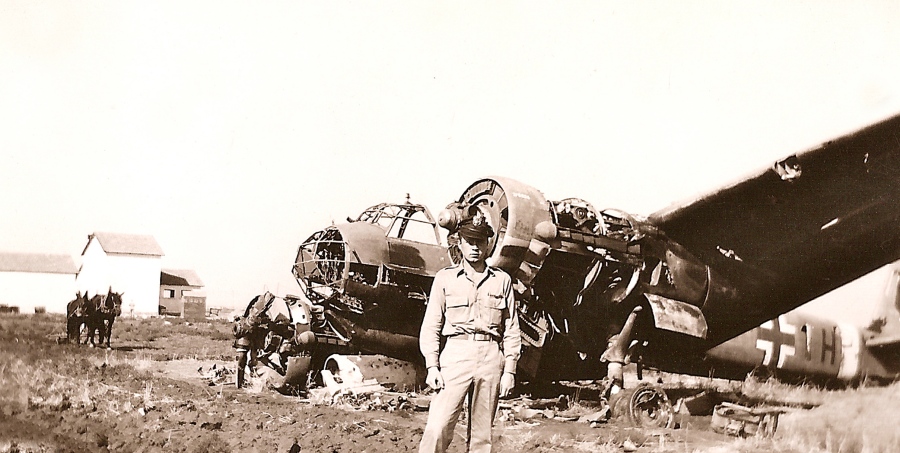 Lt. Erickson stands in front of a wrecked twin-engine German bomber at the American 15th Air Force Base in Fuggia, Italy. Before the Allies captured the base it was a Luftwaffe installation. Photo provided by Mark Erikson

“He was the pilot of a B-17 christened by the boys as ‘Lili of the Lamplight.’

“Lt. Erickson … was recently awarded the Distinguished Flying Cross for ‘extraordinary achievements’ while participating in more than a score of bombing assaults on vital Nazi targets in Europe and in support of advances by the ground troops in France.

“Lt. Erickson, also holder of the Air Medal and four Oak Leaf Clusters, is the son of Frank and Clara Erickson, 800 Memorial Highway in Bismarck.

“Our fourth mission was a rough one. Our ship was seriously damaged. Although we managed to stay in formation, part of the rudder was torn off and the ship was in bad shape. I learned then what flak could do.

“I was on our seventh mission when we first came in contact with enemy fighters. Things happened so fast most of the time that we didn’t have much chance to analyze our feelings, although most of us knew what it’s like to be good and scared.

“Getting up this morning was worse, harder than the many others that I’ve passed this year in England. Whether it was the subconscious anticipation of the day ahead, I don’t know.

“Many times this had happened: The tap at the foot of my bed, my name called out in the cold, damp darkness of the barracks, the flashlight and footfall of the ‘Charge of Quarters’ (soldier) waking the chosen for today’s flight–all this at 2:30 a.m.

“As my feet hit the cement floor beside my bed, my head feels dizzy, too many flights and not enough sleep, or was I just tired and afraid of the whole situation? The bad weather, cancelled missions, changing of the targets after the flight had started, the target socked in with two or three layers of clouds, dumping our payload somewhere over the countryside on the way back, ironically called a target of opportunity. We knew we were just plowing out something we never saw below, just bursts and smoke as we headed back to the Channel and home. 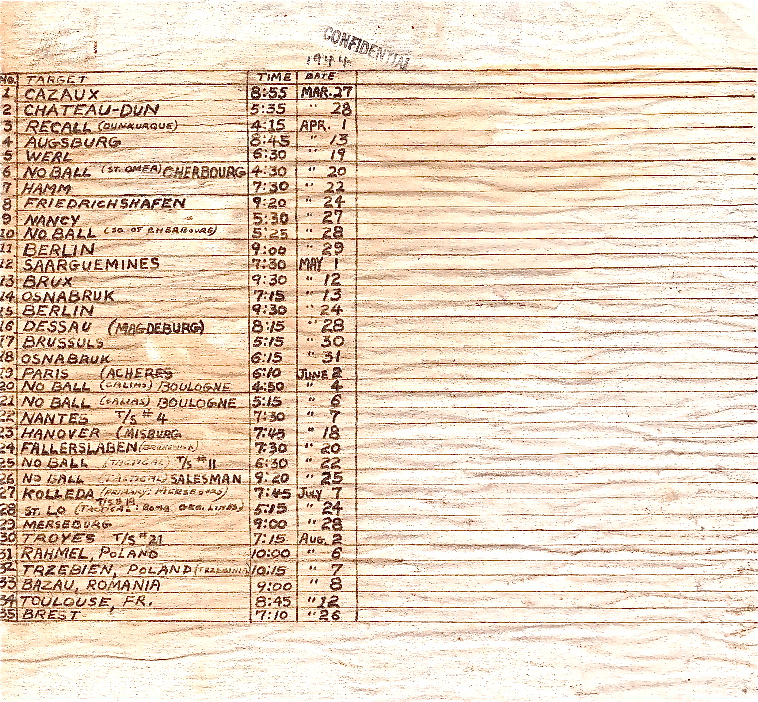 This is Erickson’s handwritten list of the 35 bombing missions the crew of “Lili of the Lamplight” flew over Nazi occupied Europe during the Second World War. Photo provided by Mark Erickson

“Then it was the miserable, bad weather back at the airfield. Often we landed at alternative strips. Waiting for clearing for another mission, all this plus knowing of the fear in the pit of my stomach even on my weekends in London.

“Up ‘Lindy,’ the truck will pick you up at Barracks C in 15 minutes,’ the silhouette with the flashlight said. I noticed my weekend buddy, Taylor, in the bed next to me slept on. He grunted at the invasion of light and then rolled over back to sleep.

“My crew was the first one picked for today’s flight. I was dressed in less than 10 minutes in spite of the darkness. We let the rest of the barrack boys sleep away. Many would be fortunate not to be on the day’s flight or the unfortunate others if you were in a hurry to get your tour complete and go back home. Either way it was our day up and we would be off in a couple of hours.

“As I crawled into the truck, I hit my head on the canopy support. Damn! Everything was going to be bad today.

“Breakfast of fried eggs, bread and coffee was followed by the normal briefing. Our target Berlin, my first time over 800 anti-aircraft guns that could be aimed at us at any one time. I have heard the stories and they weren’t good. I feel I have to get these feelings out of my head. My men have been a bit jittery and I have to show them all is fine whether I believe it or not.

“Another mission is up and today it is Berlin. It’s a long way back from Berlin to the airfield with those damn 109s (Messerschmitt fighters) on our tails trying to shred us to pieces and coming from God knows where. I have to get my mind straight on all this. Time to go.”

Ernest survived his flight to Berlin piloting “Lili of the Lamplight,” the B-17 he flew during the war. In fact, he made it through all 35 of his combat missions without so much as a scratch.

Some of the flights were more memorable than others. Mark, his son, says his father talked about their D-Day Invasion, supporting tens of thousand of Allied forces invading “Hitler’s Europe” en masse on June 6, 1944 for the first time. 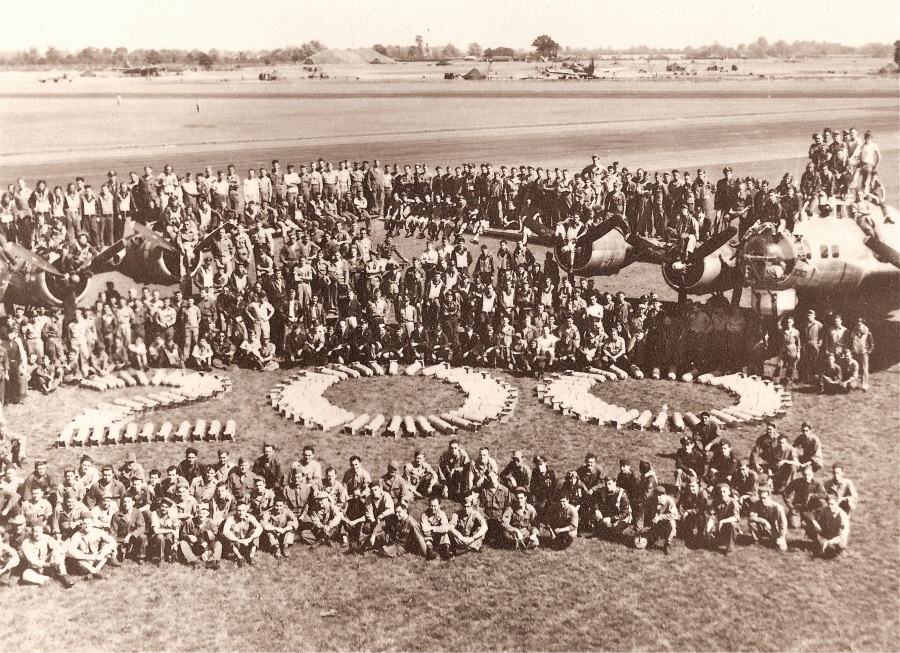 This was Erickson’s 305th Air Group in Ipswich touting the fact that collectively over the months the group had flown 200 combat missions in World War II by this point. The 305th would double that number by war’s end. He is somewhere in the sea of faces. . Photo provided by Mark Erickson

They bombed German fortifications, but what his dad remembers most about that day was not the bombing by his squadron, but the incredible number of ships that packed the English Channel in support of the invasion forces.

Among the more interesting missions he flew were a half dozen flights to bomb the German V-1 and V-2 rocket bases hidden in French forests along the Atlantic coast. These were the rockets the German’s decimated London with.

It was no “milk run.” The German rocket bases were heavily defended by anti-aircraft guns and fighter planes. American bombers who attacked these high value targets paid heavily in blood and planes.

Another mission Mark’s father told him about was a flight they made from England to the 15th Air Force base at Foggia, Italy.

“They were on their way to bomb a target in Poland or Romania and stopped in Foggia to get refueled before dropping their bombs and flying on to Russia,” Mark recalled his dad telling him. “They spent four days in Russia and then  flew back to England.”

The crew of ‘Lili of the Lamplight,’ a B-17 bomber based near Ipswich, England was part of the American 8th Air Force. Lt. Ernest Erickson, pictured standing at the far right, piloted the four-engine, heavy bomber. Photo provided by Mark Erickson, his son

An 8th Air Force Headquarters story in a newspaper dated Aug. 8, 1944 reads, “Heavy bombers of the 8th Air Force which yesterday bombed a German factory in Poland on their way to Russia, today landed at a 15th Air Force base after pounding two enemy airdromes in the Ploesti area of Romania on the second leg of their triangle-shuttle flight.

“All aircraft landed in Russia without loss yesterday after attacking a Nazi factory a Rahmel, 10 miles northwest of the Polish port of Gdynia. Few enemy aircraft were encountered, but flak was reported heavy at some points.”

At war’s end, Ernest took the G.I. Bill and graduated from University of Colorado with a degree in aircraft designing and engineering. He spent most of his adult life working for Lockheed. Mark said his dad was an aircraft designer at the firm’s storied “Skunk Works” airplane shop. It was a top secret installation that built some of this country’s most notable aircraft.

Ernest retired from the airplane building business in the late 1980s. He and his wife, Bernice, moved to Venice, Calif. when he retired. Mark is their only child.

This story was first published in the Charlotte Sun newspaper, Port Charlotte, Fla. on Monday, Aug. 5, 2013 and is republished with permission.