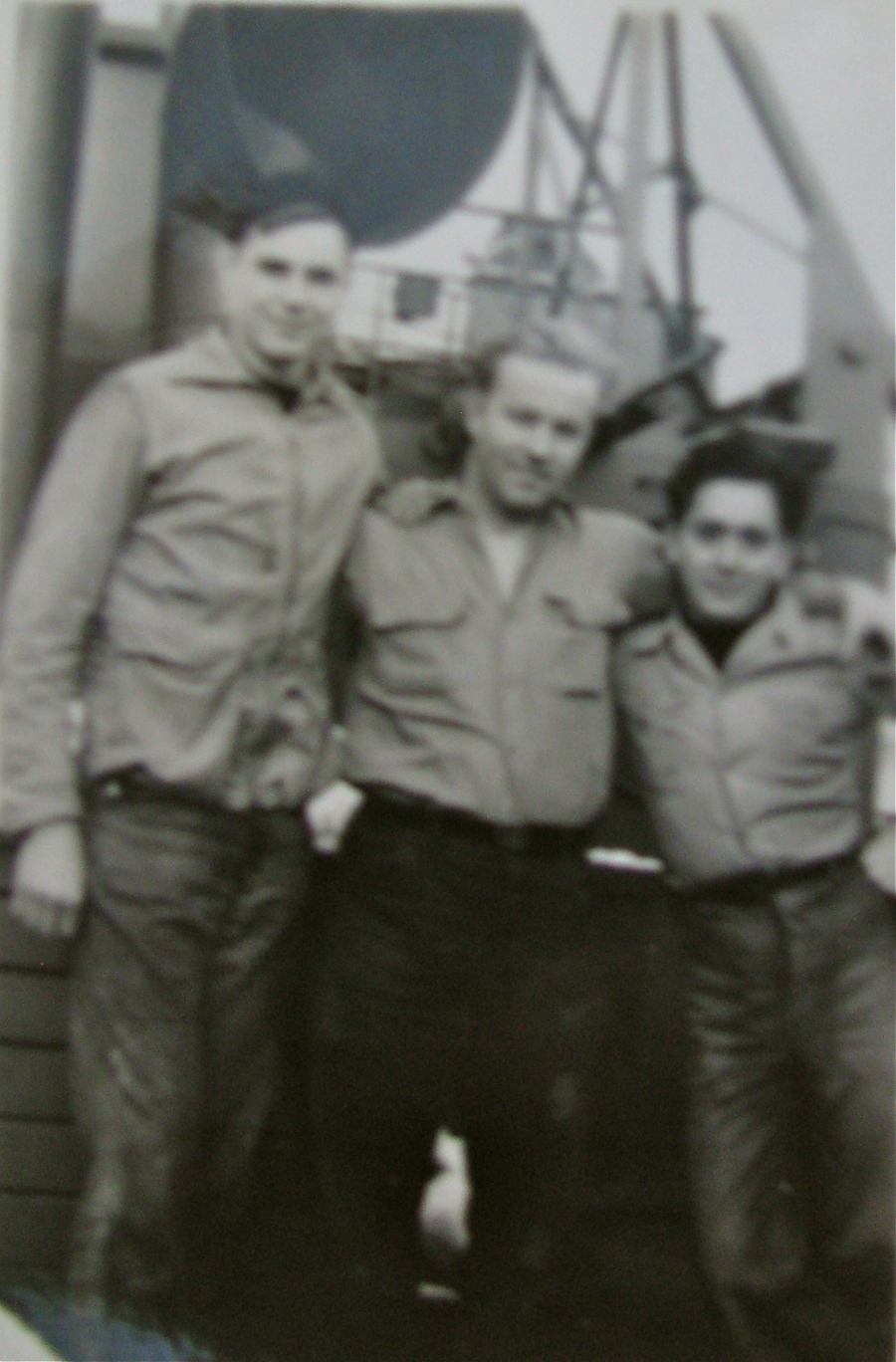 Power (left) with two buddies from long ago aboard Y-Boat-71 en route to war. Photo provided 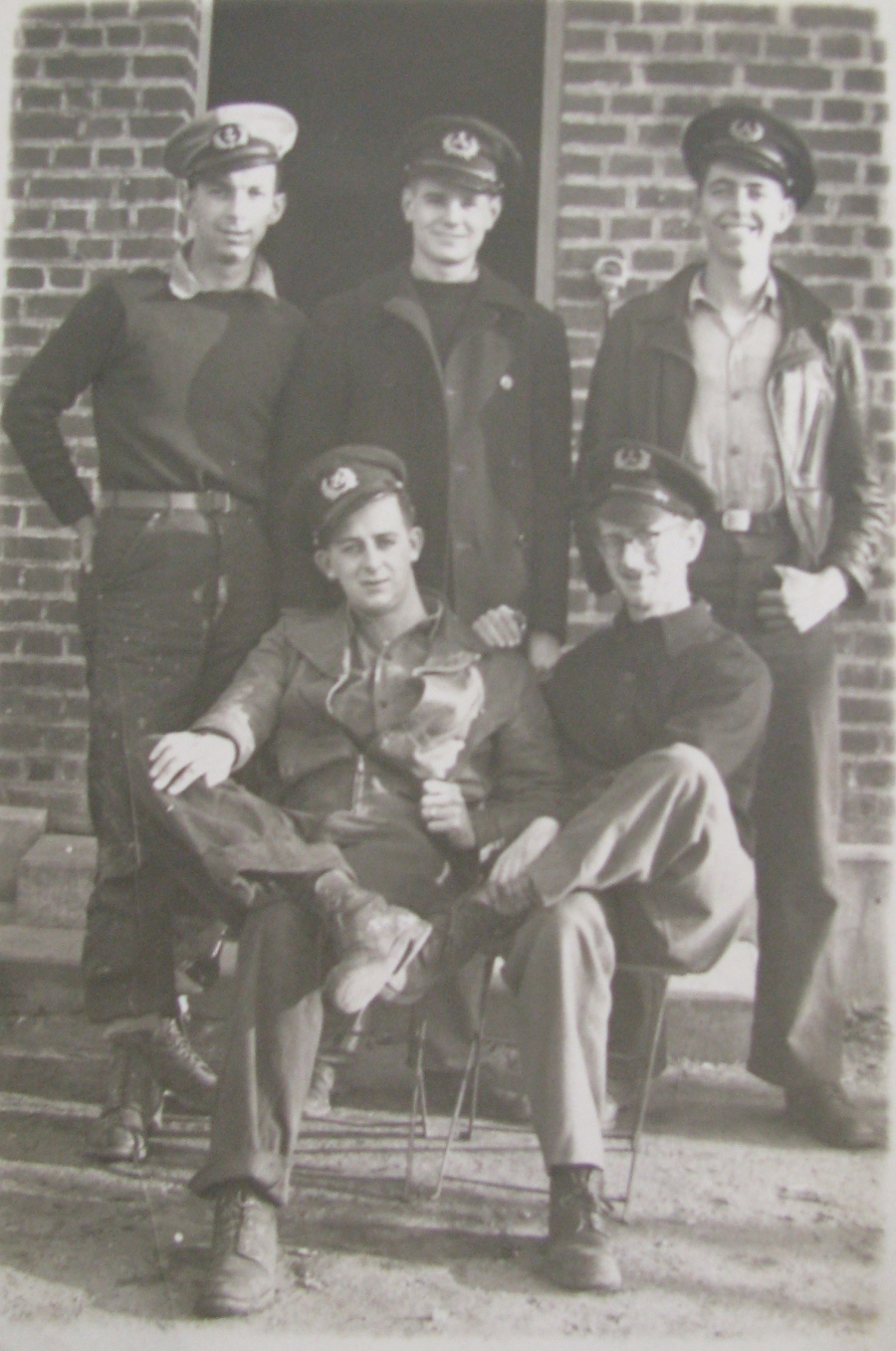 Members of the crew of Y-Boat-71 relax in Le Havre, France during World War II. Harold Power is the one standing in the middle, back row. Photo provided

Harold Power wasn’t physically fit enough to join any of the five military service branches during World War II. They turned him down because he had a bad back. At 18 he got in the U.S. Merchant Marines. He joined the outfit with the highest casualty rate, percentage-wise, in the second World War.

During the final year of the war Power served aboard a small freighter, Y-Boat-71, transporting gasoline from New York to England and across the English Channel to the war zone on the continent. German U-Boats were lurking, underwater mines protected many harbors they entered, a single shot from a rifle might have turned his freighter into a “Zippo,” the popular silver cigarette lighter many soldiers carried with them into battle.

After a couple of months training at Sheepshead Bay, the Brooklyn, N.Y. training facility where Power learned to be an engine mechanic, he and the 14 man crew picked up their ship in Rochester, N.Y. They sailed it down the St. Lawrence River to New York. There they formed their first convoy for crossing the Atlantic to England.

“On the way to New York City the crew docked Y-71 and a buddy and I went looking for a beer all decked out in our Merchant Marine uniforms,” the 87-year-old Englewood resident recalled. “We were headed back to the boat two discouraged 18-year-olds. No bartender would sell us a beer.

“We were moping along when we ran into these two big guys who were older and wiser than the two of us in our uinforms that made us look like Boy Scouts,” Powers said with a smile. “They took us back into the bar and Max, the more dominant of the brothers, demanded: ‘Give these two kids a beer!’

“With that Max pounded his fist down on the bar. Every glass levitated and he declared: ‘If these boys are old enough to fight for their country they’re old enough to drink a beer.’

They also found out their two big friends were Max and Buddy Baer. Both fought Joe Louis, the ‘Heavy Weight Champion of the World’ in the ’30s and ’40s, and lost.

After reaching New York City aboard Y-71 the convoy of 50 ships, mostly work boats, formed up and sailed across the Atlantic at 3 knots. The sea was as smooth as glass during the entire 30 days it took them to reach Plymouth, England.

“We went to Cardiff, Wales where we dumped our oil and took on a load of gasoline,” Powers said. “We took it to a little fishing village near the site of the D-Day invasion.

“It had a small harbor, but the town was almost destroyed by the war. We hooked up to a pipeline that went up over a hill from our dock,” he said. “A buddy and I followed the pipeline over the hill and found a bunch of German tanks parked in a field. German soldiers who had surrendered sat around their disabled tanks.

“It turned out there was a ‘Red Ball Express’ convoy and other American vehicles waiting for the gasoline we brought in.”

Most of their time was spent bringing gasoline to small ports along the French coast. It required sailing the English Channel. Places like the town of St. Lo that had a small harbor.

“A quiet trip across the Channel was rare. The cook would make up a basket of sandwiches and tie them down in a basket on the table,” Power said. “As soon as we got in the Channel everybody hit their bunks because you could’t walk around. In the engine-room, where I was, we’d lie down on the floor and hold on to a couple of nearby pipes.” 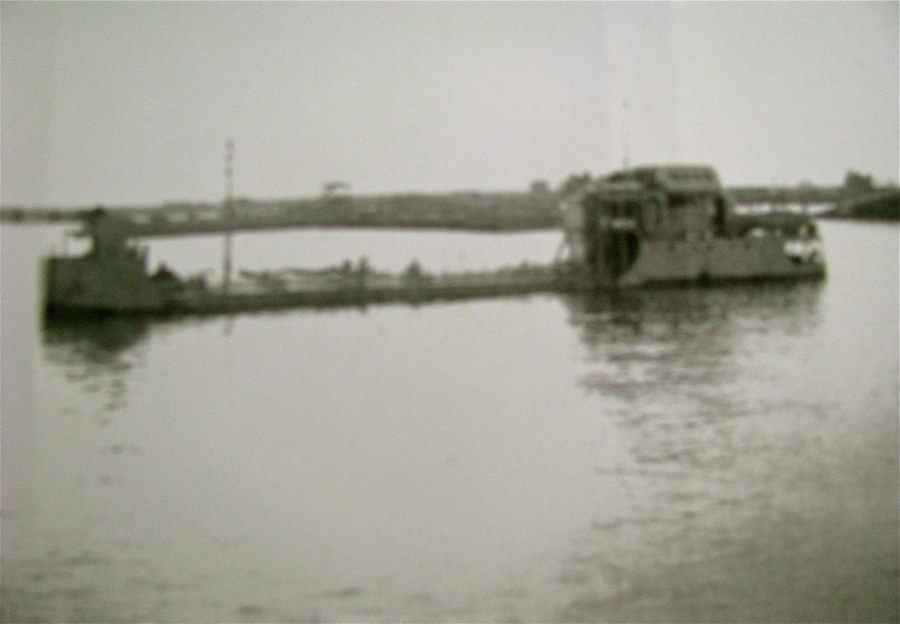 This was Power’s Y-Boat. She was 180-feet long, 60-wide, drew 13-feet of water loaded and had 5-feet of freeboard, meaning the deck of the ship was only 5 feet above the sea. Photo provided

Then there were the German E-Boats, like American PT-Boats, that attacked convoys or individual ships in the Channel mostly at night. They were anchored off the entrance to Le Havre Harbor when a loose German mine blew up and caused a freighter to beach. It dented the side of Y-71 that was 50 yards away. It wasn’t serious enough to go into port for repairs.

While making up a convoy off the Cliffs of Dover in the Channel one night they were backed over by a much larger freighter.

“All of a sudden Y-71 went down in the bow. The guys on the bridge said they never saw a thing,” Power said. “We had a six-foot gash in the side of our boat. We sailed into London to have it repaired.”

They were sailing by the Channel Islands, held by the Germans during much of the war. They opened up on Y-71 with their shore batteries, but the tiny tanker was too far away for their 88s to reach them.

“It was a beautiful day in the Channel. We were delivering a load of fuel to Dieppe, France when I heard a shot and saw a streak go by me and hit the deck,” he said. “Moments later I saw another streak go by and realized some guy on the bank was firing at us with his rifle,” Power recalled. “Our gunners had their guns apart cleaning them at the time, so the only thing they could do is point their useless barrels toward the shooter on the bank. When they did he ran.

“At war’s end we were near the Isle of Wright. We went into port and guns were shooting into the air in celebration, banners were waving, people were yelling and church bells were ringing. That was the end of World War II in Europe.

“After that we went to London got our tanks steamed out and took a load of water into a little town called Cuxhaven at the mouth of the Elbe River in Germany. As we landed at the dock a guy with a Brooklyn accent said to us, ‘It’s about time you guys got here.’

Power (left) with two buddies from long ago aboard Y-Boat-71 en route to war. Photo provided

“He was an American who had been visiting relatives in Germany when the war broke out. The Germans wouldn’t let him leave. They put him on a fishing boat and that’s where he spent the rest of the war.

“When we got off the boat at Cuxhaven the town had not surrendered to the British. As we walked around the the village German soldiers would salute us while going through their daily drills. We were there three days an no one made any attempt to harm us.

“Finally, the British marched in and took over. They took down the Swastika flag at the entrance to the town and put up their own British flag.

“We sailed back to England and by then my year of service was over. On Aug. 15, 1945 I was discharged, got my sea bag and headed for Paris. I asked how I got back to the States the reply I got: ‘That’s your problem buddy.’

“I met up worth a guy who had also been in the Merchant Marines who was a bit older. We decided to go sightseeing in Paris for a couple of days. We slept on park benches at night and ate coffee and doughnuts at the Salvation Army.

“We thumbed our way to Le Havre and found a couple of Frenchmen who had a business placing Merchant Mariners on ships for the States. I got aboard a ship called the Robin Hood as she was sailing away from the dock. She was about 500-feet long and had carried passengers and freight between England and Cape Town, South Africa before the war.

“I went down to the engine-room and was told I had nothing to do but enjoy the ride home,” he said. “I spent the next six days in a first class cabin eating great food until we reached New York City.”

After the war Power was accepted in General Electric’s Machine Apprentice School. He worked for them for six years. Because he had grown up in Marblehead, Mass. and lived around boats all his life his next job was as a yacht broker, but he didn’t much like sales. He became the manager of a marina for several years. After that he went in the marine surveying business because he knew a lot about wooden boats.

Then he had a 50-foot double decker sightseeing boat built and ran his own tour boat for a few years all over the country. He took tourists for voyages on Lake Michigan, down the Ohio River, in the Mississippi River and eventually around Sarasota.

He and his late wife, Evelyn, moved to Englewood in 1998. A short while later he sold his tour boat. In 2000 she developed Parkinson’s disease and Power took care of her until she died eight years later.

The couple has two grown children: Sandra and Christopher.

This story was first published in the Charlotte Sun newspaper, Port Charlotte, Fla. on Wednesday, July 10, 2013 and is republished with permission.