Seaman Bud Lounsbury was exploring the French Riviera, one of the 27 Mediterranean ports he visited while serving in the Navy during the Korean War. He was part of the four-man crew that operated the admiral’s barge. Photo provided

Bud Lounsbury of North Port, Fla. may have had the cushiest job in he Navy! He served as a seaman aboard the fleet admiral’s barge in the Mediterranean during the Korean War.

“I made two cruises with Adm. Richard Moorehouse, commander of the Mediterranean Fleet in ’53 and ’54. It was great duty,” the 79-year-old former sailor said. “It was the luck of the draw. It was nothing but a gravy-train job.

“Four of us were assigned to his barge. There was a coxswain in charge, two seamen who manned the lines and a mechanic. Our entire duty aboard the Carrier Midway, the admiral’s flag ship, was to keep his barge shipshape and ready to go day or night. 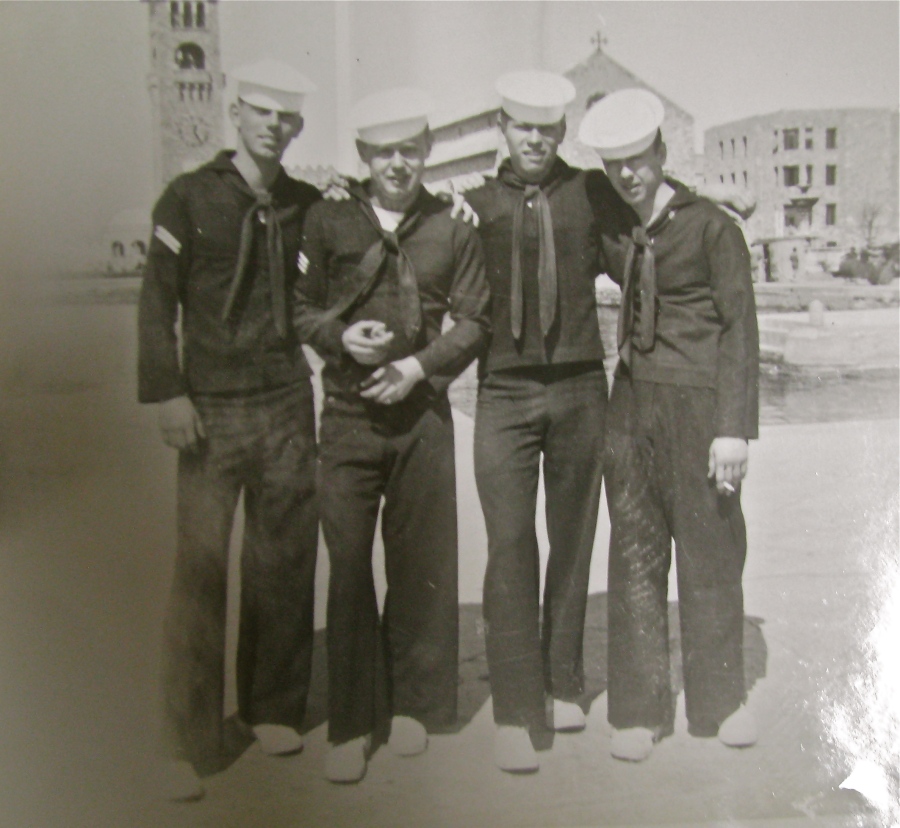 This was Adm. Richard Moorehouse’s, commander of the U.S. Mediterranean Fleet, boat crew. Lounsbury is the tall sailor at the far left. Photo provided

“His private yacht was a 25-foot teak and mahogany craft with two cabins forward and aft. The back cabin was his. It was all decked out in fancy lace where the admiral sat,” Lounsbury explained. “The Midway was too big to come ashore. So it would anchor off five or six miles and we would take him ashore in his barge.
“We’d put his boat over the side at sea and come around to the gangway and pick the admiral up and take him wherever he wanted to go. Sometimes we’d wait for him and sometimes he’d send us back to the ship and call us later to come get him.

Moorehouse wasn’t the only officer aboard the Midway with his own private yacht. His was a 25 foot black-hulled craft. The captain of the carrier had his own gig. It was identical to the admiral’s, but it’s hull was painted green. All the other officers aboard ship were taken back and forth to shore aboard two 35-foot wooden boats specially made for them. Then there were the 10 steel crafts that ferried the rest of the carrier’s crew ashore and back again.

“Because we served on the admiral’s barge we didn’t stand watch like the rest of the crew,” Lounsbury said 60 years later with a grin. “We could go ashore and stay over night almost any time we wanted. The admiral would give us permission. 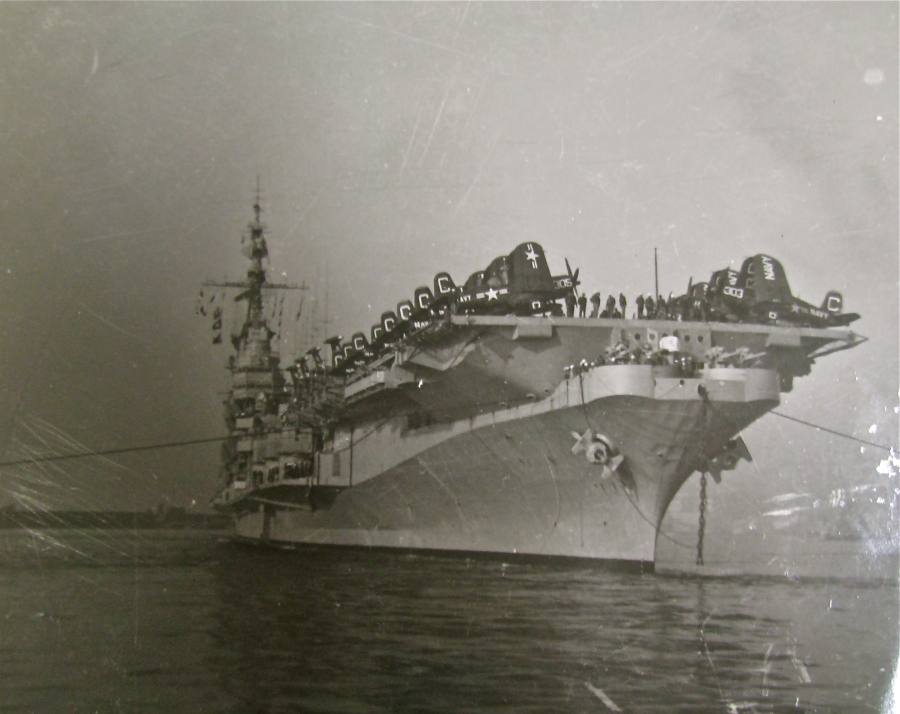 The USS Midway was a Midway Class World War II vintage air craft carrier. At 972 feet in length with 5,500 sailors aboard the flattop was the largest ship in the world until 1955. Photo provided

“We had three chow halls on the Midway. Because we carried ‘Head-of-the-Line Passes’ we got our chow first. All our uniforms were laundered right away because the ship’s laundry knew we were part of the admiral’s barge crew.

Lounsbury remembers the first time he helped take the admiral ashore. It was no big deal.

“We were at the Rock of Gibraltar in the Mediterranean and we took Adm. Moorehouse ashore to pick up a couple of cases of liquor,” he said. “He came back with the whiskey and we took him back to the Midway.

“On an other occasion we took the admiral ashore at Marseilles, France. The weather was terrible. The water was rough and it was snowing. He told us to stay at dockside until he returned. We spent the night standing around an open 55-gallon drum full of wood we burned to try and keep warm.”

The trip Lounsbury remembers best was the one he took after he received word from the Red Cross, while aboard ship. his father had suffered a stroke back home in New York and was dying.

The admiral’s barge was a 25-foot teak and mahogany luxury motor launch operated by a coxswain; two deck hands and a mechanic. For two years Lounsbury was one of those seaman who kept the brass on the boat shining brightly. Photo provided

“I talked to the admiral about my situation. He told me, ‘If you want to go home and see your dad, I’ll make the arrangements.’ I told him, ‘I’d feel pretty bad if I didn’t go home and he passed away.’

“The admiral put me on a helicopter and flew me to the USS Roosevelt, the other carrier in the fleet. They flew me aboard a fighter plane from the deck of the Roosevelt to Naples, Italy.

“In Naples the admiral made arrangements for me to catch a civilian Constellation and fly back to the States. I flew into Washington, D.C. and  made it the rest of the way home by myself,” he said. “I got home before my father passed away.

“The admiral was a super nice guy. He would talk to you like he was an average guy. At times we’d find him up on deck. He might be sitting in his special high-back, swiveled seat on the Midway’s third deck watching the fleet practice maneuvers,” Lounsbury recalled.

A Marine sentry guarded the door to his work quarters aboard ship. Being the fleet admiral was a lonely job.

“We’d walk up to the Marine, who knew who we were. He’d open the admiral’s door and we’d walk in. Maybe I’d say, ‘Admiral you want to talk a little bit?’ “Sure,’ he’d say.

“We’d come in and sit there and talked to him. He’d always ask us questions about our family and where we were from.”

Although the Midway was only serving as backup in the Mediterranean, it was scheduled to go to Korea, during the war, if needed. Lounsbury was lucky he never made it to the Far East. Instead, he spent his time aboard the biggest ship afloat in those days visiting all 27 ports in the Med.

He did see one major accident aboard ship during the time he served aboard her.

“When they practiced takeoffs and landings they placed steel barriers across the deck in case the tail-hook of a landing jet didn’t catch. This one ‘F2 Banshee’ hit the deck so hard it bounced over the top of all three barrier and crashed into 10 planes parked on deck. They all blew up, but luckily nobody got hurt. After they put out the fire they pushed the remains of the charred fighters over the side into the sea,” he said.

Looking back on his Naval experiences six decades ago Lounsbury said “It was great duty. I enjoyed every minute of it. I’d do it again if I ever had the opportunity.”

Lounsbury was discharged from the Navy in September 1954. He came home to Peekskill, N.Y. got his cousin, a union boss, to help him get a job in the Iron Workers Union. He went to work almost immediately helping build the Tappan-zee Bridge that spans the Hudson River between Terrytown and Nyak, NY.

He spent years working as a member of the IWU until work got scarce and he signed up for the Peekskill Police Department. For 20 years he worked as a cop before retiring to Florida with his wife, Caroline in 1980. He has five children: Nancy, Cathy, Cheryl, Carolyn and Cliff.

This story was first published in the Charlotte Sun newspaper, Port Charlotte, Fla. on Monday, May 27, 2013 and is republished with permission.