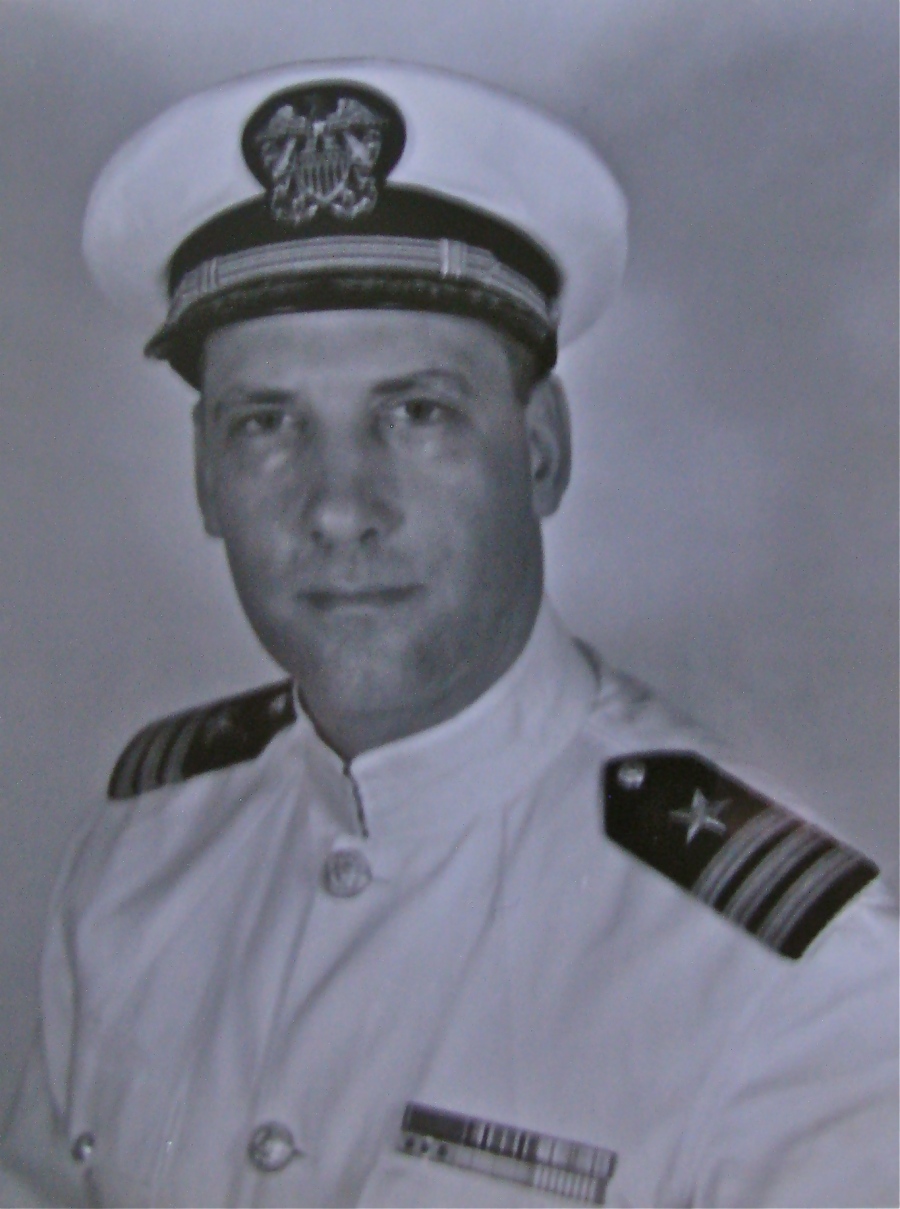 Cmdr. Philip Merrill is pictured in his summer dress uniform. He served in the U.S. Navy and the Reserves from 1943 until 1976. Photo provided 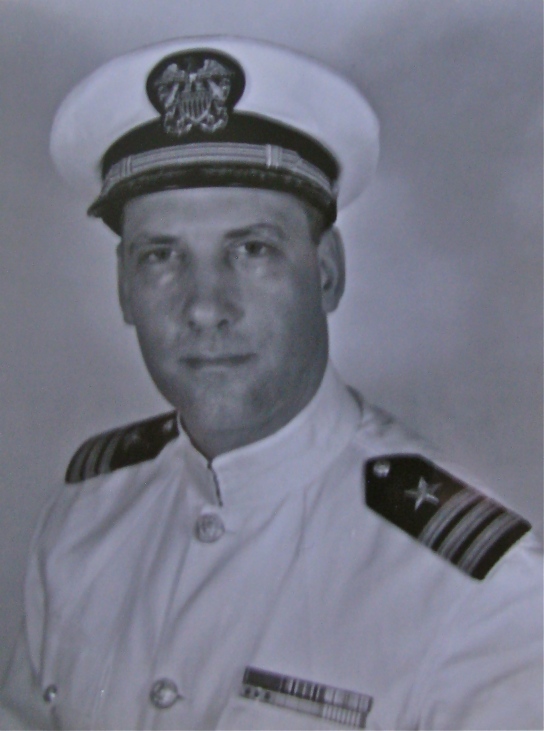 Cmdr. Philip Merrill is pictured in his summer dress uniform. He served in the U.S. Navy and the Reserves from 1943 until 1976. Photo provided

Philip Merrill almost missed World World II. Two weeks before graduating from high school at 17 he was sworn into the Navy on May 17, 1943.

“I joined the V-12 Program. I was sent to Stevens Institute of Technology in Hoboken, N.J.,” the 87-year-old Punta Gorda, Fla. resident recalled. “This was a two year training program to teach young men just out of high school to be engineering officers.

“After two semesters at Stevens the kamikaze toll in the Pacific was such that they were losing a lot of people and the Navy was looking for volunteers who would become midshipmen. I volunteered and after becoming a midshipman I was sent to Bainbridge, Md. to Recognition School. The purpose of the school was to teach you to recognize Japanese airplanes,” Merrill said.

“While I was in Recognition School World War II ended. The Japanese surrendered aboard the Battleship Missouri on Sept. 2, 1945,” he explained. “I got orders to go aboard the USS Hornet (CV-12) in California. We sailed for Pearl Harbor and I saw duty in the carrier’s engine room.

“The Hornet wasn’t flying aircraft, it was taking people from the war zone back to the U.S.A. as part of ‘Operation Magic Carpet.’ They used the carrier’s hangar deck to bunk soldiers on the way back to the States. 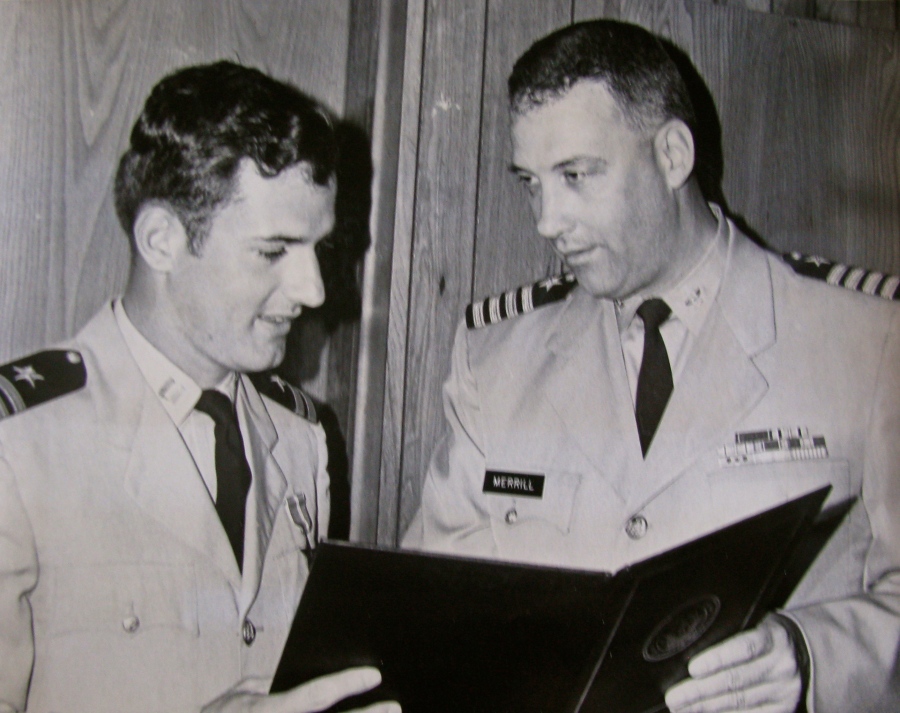 Merrill, right, presents an award to a young lieutenant. He was a captain and the commander of the Ship Activation., Maintenance and Repair Program while serving in the Naval Reserve in Philadelphia. Photo provided

“Before the carrier returned to the U.S. I got a new set of orders to report to the Charles J. Kimmel, DE-584, in the Philippines. I became the engineering officer aboard the destroyer escort,” Merrill said. “Because the Navy had lost some ships in a typhoon off Okinawa at the end of the war the Kimmel was assigned to special weather duty. The government got in the weather business and began forecasting weather ahead of time.”

After discharge from the service in 1946 he took the G.I. Bill and ended up as a mechanical engineering student at West Virginia University. Merrill was still in college during the summer of 1950 when the Korean War began.

“I got a call from the Navy in Washington. They told me because I had been in the V-12 Program in WW II and had experience in turbo-electric power they were going to recall me to active duty,” he said. “I was recalled and ordered to Green Cove Springs.

“I went aboard the USS Weiss, APD-135. She was a modified destroyer escort that carried four landing crafts on her deck. After training on beach landings in Guantanamo, Cuba the Weiss was transferred to the Pacific Fleet and sent to Korea,” Merrill said.

“The Weiss became a special missions ship. We carried a contingent of UDT (underwater demolition people) aboard our ship. The UDT conducted night raids on the enemy’s railroad.

“On one occasion we carried a group of British Royal Marines who were working with our UDT guys. The British conducted a couple of special missions I don’t want to talk about. They used our landing craft to reach the beach,” Merrill recalled.

“At one point we moved to the east coast of Korea and sailed up the Han River on a search and destroy mission. We had the UDT team aboard and on occasion we used our 5-inch 38 gun on the ADP to bombard enemy emplacements,” he said. “The tide differential in the river was 46 feet, so it was tricky.

“The Weiss also conducted a mission in Buckner Bay off Okinawa. The coral in the bay had regrown after World War II and we were sent down there to blow some of the submerged coral away so the Marines could practice some landing exercises,” he said. “These exercises were in preparation for Gen. Douglas Mac Arthur’s invasion of Inchon, North Korea.” 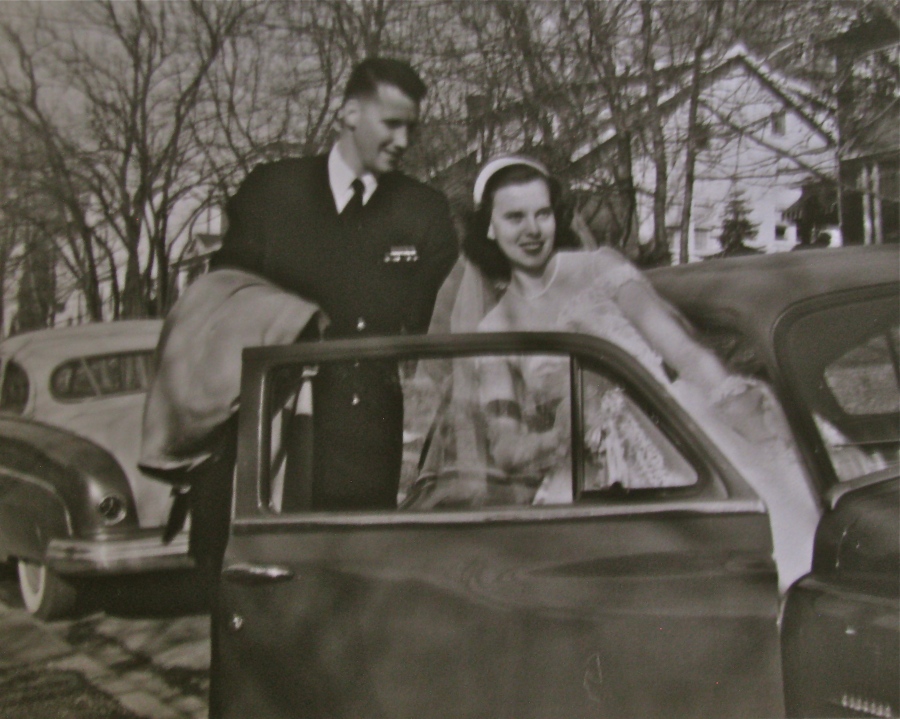 Inchon is where Mac Arthur’s forces made their end run behind enemy lines rolling back the North Koreans forces that eventually changed the war’s outcome.

“It was time for me to be rotated out of Korea. I became the personnel officer at the Philadelphia Receiving Station. I was released from active duty at Philadelphia in 1953,” Merrill said. “I had spent a total of seven years in the military between my time in World War II and Korea.

“I went back to college after the Korean War and graduated in 1955 with a degree in mechanical engineering. I went to work with the Dupont Company and stayed in the Naval Reserve,” he said. “It was during this period of my life I became the commanding officer of the Naval Reserve’s Ship Activation Maitenance and Repair Program in Philadelphia. We had the largest Naval Reserve unit in the country.

“It was while I was serving with the Reserves in Philly I got to know Lt. John J. O’ Conner. He was a Catholic priest who became an admiral and Chief of Chaplains for the Navy,” he said. “After he retired from the service Father O’Conner became the Bishop of Scranton, N.J. Later he was named Archbishop of New York City. If he hadn’t gotten brain cancer and died, I believe he could have become the first American pope. He was highly regarded in the Navy and the priesthood.

“While living in Kennebunk, Maine, 90 miles from Boston, I got the opportunity to teach management skills at the Naval War College in New Port, Rhode Island. While there I became friends with Adm. Stanfield Turner, president of the college, who later became head of the CIA.

“While living in Kennebunk and working for West Point Pepperell I was named commanding officer of the Naval Reserve’s Research and Development Department in the Boston area,” he said.

When Merrill retired from the Naval Reserves after 33 years of service he was a captain. He joined the Navy in May 17, 1943 and served until July 1, 1976.
“I didn’t do anything exciting, but I had a good time in the Navy,” the old salt said.

He and his wife, Martha, moved to Punta Gorda 22 years ago. They have a son, Charles and a daughter, Julia.

This story was first published in the Charlotte Sun newspaper, Port Charlotte, Fla. on Monday, May 20, 2013 and is republished with permission.