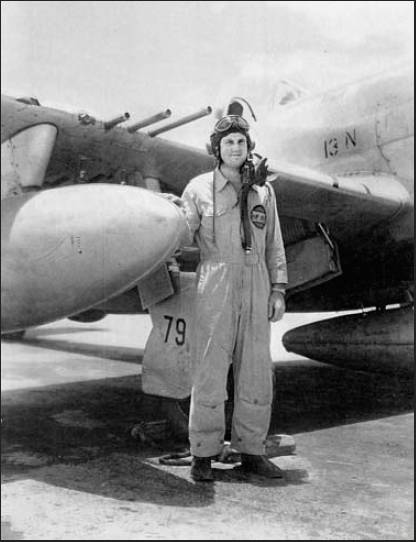 First Lt. Hal Johnson stands in front of his P-47 “Thunderbolt” fighter after World War II when he was flying with the 81st Fighter Group, 91st Squadron, stationed at Wheeler Field in Hawaii. Photo provided

As a kid Hal Johnson wanted to be a fighter pilot. When he joined the Army Air Corps in 1943 they made him a B-24 “Liberator” bomber pilot.

“By the time I graduated from B-24 training and was ready to go overseas, I was told they needed pilots to fly B-29 ‘Superfortresses.’ So I went back and trained to be a B-29 pilot. I just completed B-29 training when the war ended,” the 82-year-old Southwest Florida man said.

“I liked airplanes, and I liked my association in the Air Force,” he said with a smile more than six decades after he signed up as an 18-year-old aviation cadet. “After the war I joined the 81st Fighter Group of the 94th Squadron, 7th Air Force based at Wheeler Field in Hawaii. I was flying P-47 Thunderbolts.”

Johnson had the distinction of crash landing a P-47 in Pearl Harbor in 1949 when the engine in the fighter quit.

“I simply unbuckled my seat belt, got out of my parachute harness and climbed out of the cockpit as the fighter sank to the bottom,” he said. “I was only in the water a minute or two when a Navy rescue boat came and got me.”

In 1950 he was transferred to Kirkland Air Force Base in New Mexico. That’s where he got his first jet fighter, an F-80 “Shooting Star.”

Two years later he transferred into F-94 fighter jets. It was at this point in his career that he was assigned to Japan shortly after the start of the Korean War.

“The 94s were the first American all-weather interceptor fighter planes with radar in their noses and afterburners that gave them extra propulsion,” Johnson explained. “However, the Mig-15s that confronted us in Korea were more maneuverable with their swept wings. Aerodynamically they were a better airplane.

“We established an air base at a place called Suwon, about 20 miles south of Seoul, Korea. K-13 was our base number,” he said. “We flew in all kinds of weather, often at night escorting B-29 bombers on missions. When we weren’t flying protection for the bombers we would intercept enemy fighters coming down from up north.

“To intercept an enemy fighter at night in bad weather you had to have a real good radar operator to work with,” Johnson said. “I’d wanted my radar operator to put me to the right and rear of the enemy plane so I could see his exhaust.”

He never shot down any enemy planes in Korea during the 55 combat missions he flew in an F-94, but he scared a bunch of them back across the Yellow River into northern Korea. 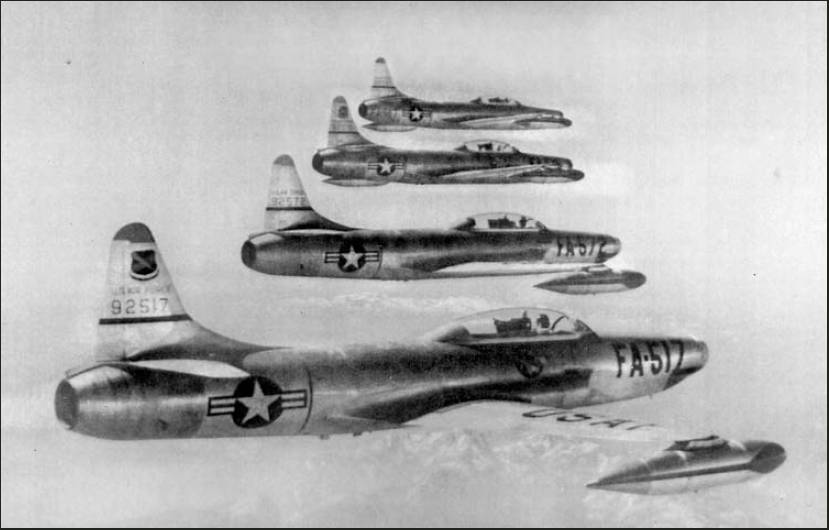 Hal Johnson was flying the F-94 “Starfire” all-weather interceptor in the foreground. He provided cover for B-29 bombers and flew fighter interceptor missions in all kinds of weather during the Korean War in one of these jets. Photo provided

Johnson arrived in Korea in March 1952; by Christmas he was back home with his wife, Betty, in their apartment with their 2-year-old son, Jim.

At the end of the Korean War, Johnson spent the next five years stationed at Newcastle County Airport in Wilmington, Del., flying F-94C “Starfire” fighters. It was an entirely different plane than the fighter he flew in Korea.

“It had no machine guns, but in their place it had 48 rockets,” he said. “There were 24 rockets around the nose of the plane and a pod of 12 more rockets on each wing.”

Their job at Newcastle was to help protect the eastern coast of the U.S. from potential attack from enemy bombers flying from Russia. Their outfit was one of a string of Air Force fighter squadrons stationed along the East Coast providing protection.

It was about this time in Johnson’s military career that he decided to make a big change and go into aircraft maintenance. By then he was a lieutenant colonel in the Air Force.

In 1960 he was stationed in Labrador, Newfoundland, in charge of maintenance for a squadron of F-102 “Delta Daggers.” They were supersonic jet fighters that could fly at 900 mph.

“We did a lot of scrambling up there because of airliners that were flying off course,” he said. “We were sent up to check these planes out because they didn’t know what they were.”

A year later, in 1961, Johnson was reassigned to Tyndall Air Force Base in Panama City, Fla. There he was in charge of training pilots who flew F-101 “Voodoos,” F-102 Delta Daggers and F-106 “Delta Darts.” They did all the testing of new weapon systems at Tyndall.

In 1964 Johnson became chief of maintenance at Selfridge Air Force Base near Detroit.

“While there, someone in the area found the remains of a World War I French-made Spad fighter in a garage. They brought it to the field and gave it to our wing commander,” he said. “He told me to fix it up. It was in terrible shape, but with the help of several knowledgeable sergeants who knew about such things, we rebuilt the old airplane, they rerigged it, recovered its wings and body and flew it.

“The day I flew it, we invited Capt. Eddie Rickenbacker, who flew a Spad in World War I. I got to talk to him, and we had a big formal dinner that night that he attended.”

When this country became seriously involved in Vietnam in 1965, Johnson was still a lieutenant colonel in charge of aircraft maintenance. He was told it was time for him to take another overseas tour.

“I became an adviser to the South Vietnam Air Force stationed near Can Tho at Bihn Thuy Air Base, south of Saigon,” he said. “I was attached to the 74th Fighter Wing. It had a squadron of A-1 single-engine attack bombers, a squadron of H-34 helicopters and a squadron of E-17 (Cessna) tail-dragger reconnaissance aircraft.

“I got over there and fell right in with the Vietnamese Air Force. I had a lot of respect for their pilots. They flew until they were killed,” he said.

Most of Johnson’s time was spent flying the monster A-1 attack bombers. They were used for tactical air support. He flew many of his 116 combat missions in Vietnam in an A-1 bombing and strafing ground targets.

The big, slow WW II vintage figher-bombers would fly over a target at 200 mph, dump a 2,000-pound bomb load, possibly make several strafing runs back over the enemy position and fly home. 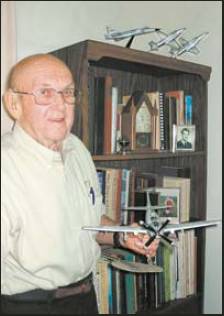 Col. Hal Johnson, who lives in southwest Florida, holds a model of an A-1 like the one he flew in Vietnam. Sun photo by Don Moore

Johnson was in Vietnam from April 1966 until May 1967, when he came back to the States. He spent his last five years in the service at various Air Force bases in Oregon, California, Florida and Massachusetts.

“I didn’t have any big combat missions, but after almost 30 years in the service I got to fly some 35 different airplanes,” he said.

In 1972 he retired as a full colonel and moved to Port Charlotte with his wife, Betty. They have been active in the local Red Cross and their church, 1st Presbyterian Church of Port Charlotte.

This story was first published in the Charlotte Sun newspaper, Port Charlotte, Florida on Monday, Dec. 4, 2006 and is republished with permission.