Sgt. George Sutherland is pictured with one of his 5 light tanks with a Nazi flag draped over the front. His platoon spearheaded Gen. George Patton’s 3rd Army advance across Europe during World War II. Sutherland’s tank squad was part of the 10th Armored Division. Photo provided

George Sutherland of Port Charlotte, Fla. was in the vanguard of Gen. George Patton’s 3rd Army atop his light tank fighting his way into Germany during the closing months of World War II.

A staff sergeant in command of a reconnaissance platoon of five tanks, he spearheaded the 10th Armored Division’s lightening advance into the Third Reich. An official Army statement on a piece of yellowed paper pasted in a crumbling scrapbook doesn’t really tell his story:

“Tigers of the 10th, your accomplishments against the enemy have earned high praise from the Corps and Army Commanders. During the first three weeks of fighting you have liberated 100 square miles of France and occupied 50 square miles of German territory. Many of your hometown papers have already announced the Tigers as the first of General Patton’s divisions to enter Germany. You have seized 64 towns, capture over 2,000 prisoners of war, repulsed 11 counter attacks. Enemy personnel and material you have destroyed in substantial quantities. All has been at a minimum cost to yourselves in lives lost and vehicles destroyed. I take this opportunity to commend each officer and enlisted man of this great fighting division for an outstanding performance in our first test before the enemy.

The shooting war for Sutherland and the 10th Armored began with the capture of Metz, a fortified city along the Moselle River in France. For 1,000 years or more, the stone ramparts of the medieval city repelled waves of invaders throughout history.

When Sutherland and his tank crew arrived outside the gates of Metz, the Germans, who captured the city months earlier, were waiting for them.

“Before my tanks crossed a pontoon bridge fighting their way into the city, we saw the bodies of dead American soldiers stacked up like cord wood along the side of the road,” the 87-year-old local man said. “This was a pretty poor initiation for us into combat seeing all those dead bodies.”

After capturing Metz, Sutherland and his platoon moved farther northeast toward the German border. While still in France he and his tank platoon got in a shootout with a German unit hidden in a woods.

“I spread my tanks out in a line and advanced toward the woods firing our 75-millimeter guns and our .30-caliber machine guns,” he said. The Germans fired back with small arms. It was like the Fourth of July, everyone firing at everyone.

“There was so much enemy fire coming at us, I pulled my tanks back behind a hill for protection and only their turrets showed. Back behind me I saw a Jeep pull up, but I didn’t pay it any attention with all the firing going on around me.

“Gen. (George) Patton got out of the Jeep wearing his ivory-handled revolvers. He walked up to me and said, ‘Who’s in charge of these pea shooters?’

“‘Well, get ’em out of here and I’ll bring in some good stuff,’ the general ordered. He brought in his tank destroyers with their 90-millimeter guns to fire at the Germans in the forest.

“‘Thank you, sir,” I said. I was more than willing to pull my tanks off the line and have Gen. Patton take care of the problem.”

In mid-December 1944 as the 10th Armored started into Germany, it got word to return immediately to Belgium and the Ardennes Forest. What would become known as “The Battle of the Bulge” was just getting under way. Divisions of Germans, armed with the best equipment available, had broken through Allied lines.

“My tank platoon and I started out for ‘The Battle of the Bulge.’ We drove all night and when we arrived in Belgium we were diverted to Luxembourg. My platoon was sent to help guard SHAEF (Supreme Headquarters Allied Expeditionary Force) at Luxembourg,” he said.

“This is where Gen. Dwight Eisenhower and all the British generals were,” he said. “Anyone going to SHAEF we stopped and interrogated. We asked them ordinary American questions like, ‘How many homers did Babe Ruth hit?'”

On the way to Heidelberg driving along the Autobahn in their tanks, Sutherland and his men saw dozens of enemy fighters hidden in the forest along the edges of the country’s main highway. The Germans apparently planned to use the planes in an 11th-hour stand that never materialized.

“I was in command of the first American tank that entered Heidelberg. Besides being a university town the city had a nearby slave labor camp filled with Polish and Czechoslovakian prisoners.

Just before the war ended, the sergeant and his tank platoon were in the Bavarian mountains.

“I received a call to take my unit and head for ‘The Eagle’s Nest,’ Hitler’s mountain retreat,” Sutherland said. “All I could think of was, ‘With the war almost over, what a time to get killed.’ 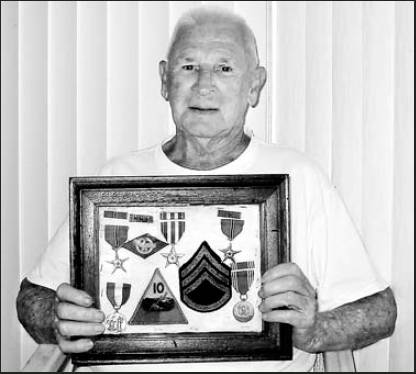 George Sutherland of Port Charlotte, Fla. holds a shadowbox containing his Silver Star, two Bronze Stars for valor, a World War II Victory Medal and a Good Conduct Medal he received while serving as a tank commander in the 10th Armored Division in Europe during WWII. Sun photo by Don Moore

“We didn’t get very far and I got a message, ‘Return to base. Hitler has killed himself.’

“I was very relieved about that I can tell you,” he said.

A few weeks later Sutherland was aboard the “Gen. Breckenridge,” a troop transport, on his way home.

“When we arrived in Norfolk, Va., there was only a Salvation Army band to meet us at dockside. I was shipped to Fort Devon, Mass., where I was discharged,” he said.

“I called my wife, Lorraine, and took a subway into Boston where I met her and my father,” Sutherland said. “The war was over for me and we went home to Fall River, Mass., near New Bedford.”

This story was first published in the Charlotte Sun newspaper, Port Charlotte, Fla. on Tuesday, Oct. 31, 2006 and is republished with permission.