The six missions Lt. Fred Hocker flew over Berlin with the crew of a B-17 bomber called “Fightin’-Bitin” were the very worst of the 23 combat missions he made as a navigator in the 306 Bomb Group, 8th Air Force during World War II.

Stationed in Bedford, England, about 45 miles north of London, Hocker remembers well the flights to the heart of the “Fatherland.” Even near the close of the war in Europe, when he was flying, it was a tough assignment to bomb Berlin.

“We went to briefing early in the morning when the target was Berlin,” the 87-year-old Englewood Isles resident recalled. “It was 450 miles one way from our base to Berlin. It was a long flight, and we had to be back before dark because we couldn’t land our B-17 at night.

“When the crews heard the target was Berlin, you could hear every airman in the room suck in his breath at the same time,” the old aviator said with a smile more than 60 years later.

“You knew the sky over Berlin would be filled with flak (anti-aircraft artillery fire),” he said. “Sometimes we were attacked by German fighters. They’d be darting around in the sky in front of us.

“But it was nowhere near as bad as what the early B-17 crews experienced flying over Nazi-occupied Europe during the early part of the war. The enemy fighters never got close enough for me to see one of their pilots up close.”

The worst part of the bombing mission was on the approach to the target. For half an hour to 45 minutes before dropping their bombs on the approach, scores of bombers had to fly in tight formation maintaining their altitude. That’s mostly likely when a bomber would be hit by enemy artillery fire.

German gunners didn’t fire at individual bombers, they had their guns set for a certain altitude. Enemy gunners would determine the altitude the B-17’s were flying and aim their guns so the American bombers would have to fly through the flak.

Hocker said there were puffs of black smoke in front and behind the bomber formation when they approached Berlin. At time the enemy fire was so thick it seemed like a person could walk on it.

“We lucked out, ‘Fightin’-Bightin’ never got hit by flak. Our ship was never hit by fire from an enemy fighter either,” he said. “We were real lucky.”

The closest Hocker and the other nine members of his B-17 came to a serious problem while in the air was on a return bomb run when one of their landing gears got stuck.

“The pilot figured out we had a landing gear problem long before we landed and called back to base,” he said. “He wasn’t sure if the gear was properly locked down. If it wasn’t locked in place, the B-17 could flip right up on you and everyone aboard might be killed.”

Their bomber was diverted to a nearby Royal Air Force base close by with longer runways. The pilot landed the big four-engine bomber as smooth as glass without a problem.

“That was the only night I was in the service I didn’t sleep between white sheets,” the old aviator said. “We stayed overnight at the RAF base and all they gave us was a blanket.”

Hocker admitted, “Many of our missions were ‘milk runs.'”

By then most of the German resistance, particularly in the air, had been shot down in flames. German cities were bombed to rubble by Allied saturation bombing from heavy bombers like his B-17. 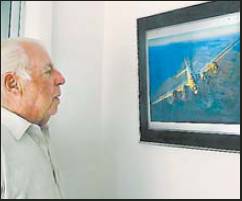 Fred Hocker of Englewood, Fla. looks at a picture of a B-17 bomber in flight similar to the one he flew in 60 years ago during the closing months of the European Campaign in the Second World War. Sun photo by Don Moore

Immediately after the war his airplane was used as an aerial mapping plane to produce aerial photographs of Allied-occupied Europe that would eventually be turned into detailed maps. For six months after the war ended, the crew of “Fightin’-Bitin”‘ mapped Europe and much of North Africa.

When he came back home to Bloomington, Ill., Hocker dated a farmer’s daughter. Eventually he became a farmer himself.

“After working for the farmer for five years, he got me started with my first 160-acre farm,” Hocker said. “Before I quit farming, I had 1,500 acres of soy beans and corn I farmed, a couple hundred head of cattle and hundreds of pigs.”

This story was first published in the Charlotte Sun newspaper, Port Charlotte, Fla. on Sunday, March 25, 2007 and is republished with permission.