One Easter Sunday, during World War II, Winifred Leiser was singled out as the “Best Dressed Woman in Uniform” and presented with an orchid while walking on the boardwalk in Atlantic City, N.J. Photo provided

When Winifred Leiser joined the Women’s Army Corps during the early part of World War II, it never occurred to her that by the war’s end, she would have become a poster girl for the corps.

For the corps, originally known as the Women’s Auxiliary Army Corps, Leiser appeared in scores of newspapers and magazines across the country in her Army dress uniform smiling radiantly.

“My father was dead, and my mother wasn’t going in the military. Our family had always had someone in the service from the time of the American Revolutionary War,” the diminutive Englewood, Fla. resident explained. “I felt it was my duty to go in the military.”

The Women’s Army Corps, called the WACS, were so new when she signed up that the Army had no women’s uniforms.

“At basic in Des Moines, Iowa, we drilled in men’s long overcoats that dragged in the mud,” Leiser said. “Our company commander had to buy her own clothes because she was an officer. She had exquisitely tailored uniforms. But she wore the same drab man’s overcoat we were issued.

“The Army didn’t know what to do with us. We were supposed to replace a man who had been doing clerical functions so he could be sent to the front lines,” she said. “After basic we were sent to Charleston, S.C., to be aircraft spotters. Volunteers were used as aircraft spotters and they were doing a beautiful job. When we marched in and replaced them, the volunteers didn’t like it.

“It was a typical Army SNAFU — ‘Situation Normal, All Fouled Up!'”

This is Winifred Leiser in an Army publicity shot with a smile on her face as she presumably cleaned up the place for Uncle Sam. Photo provided

From Charleston, Leiser and some of her fellow WACS were reassigned to Miami. Two WACS were put in an apartment-hotel in Miami which consisted of a bedroom, living room, kitchen and bath.

“We were told to stay out of everybody’s way. We did nothing at all in Miami but go to the beach and swim. We had a wonderful time,” she said with a wistful smile.

By this time Leiser had had enough of doing nothing in the service. She informed her superiors she wanted a real job or she was going to get out of the WACS.

She was reassigned to the Army base at Aberdeen Proving Ground in Maryland. They made her a columnist on “The Flaming Bomb,” the base’s weekly newspaper.

“My column was called ‘Off Limits,’ and I signed it ‘Winnie the WAC,'” she said. “Because the Proving Ground was halfway between Washington and New York, every man with pull got assigned there.

“There were all sorts of journalism professionals there. People who had worked for the big-city newspapers and magazines were stationed at Aberdeen.”

A hotshot cartoonist employed by one of the big publishing companies stationed at the base took an interest in Leiser.

“He became interested in me particularly because of my name and partially because I didn’t want to have my long hair cut. I pilled my hair on top of my head and put that nasty little De Gaulle hat we had to wear on top of it,” she said. 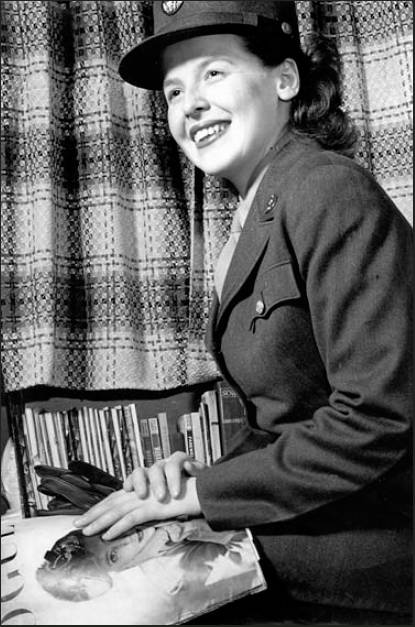 An Army publicity picture taken of Winifred Leiser reading “Vogue” magazine during the war. One of many the Army took of her to promote the WACS during World War II. Photo provided

“My cartoonist friend drew a cartoon for either ‘Saturday Evening Post’ or ‘Colliers’ magazine about a WAC, and he called her ‘Winnie the WAC,” Leiser recalled.

One Easter Sunday she got the weekend off and decided to go to Atlantic City, N.J., for the day in uniform. Although she didn’t know it at the time, this was the beginning of her Army modeling career.

“They were handing out orchids to women who were strolling on the boardwalk wearing their fabulous hats,” she said. “All of a sudden someone came up to me and handed me an orchid. I was named ‘The Best Dressed Woman in Uniform.'”

Her picture was taken by the local paper and published the next day. It later reappeared in newspapers across the country. The photograph got the Army’s attention.

After that Leiser did a number of publicity pictures for the Army in all sorts of situations looking like the girl next door in uniform.

A while later she received orders to report to the Red River Ordinance Depot in Texarkana, Texas.

“I became the assistant editor of a base newspaper with a staff of two. It was called ‘The Buckaloo.’

“I can’t remember the editor’s name, but he was a short, stout, humorless young man whose father happened to be the publisher of the Baton Rouge, La., daily paper.

“He turned out a paper that was absolutely perfect, professionally speaking,” she said. “But nobody on base liked it except the officers, because that’s all he wrote about.

“The editor was transferred, and I took over the paper. I realized we needed to be writing stories about the enlisted men, not just the officers,” Leiser said.

In no time she had readers waiting at the door of the newspaper. It became a hot item on base. 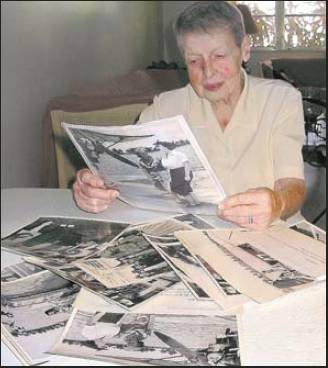 Winifred looks at magazines and other memorabilia from a lifetime ago when she was a poster girl for the WACs in World War II. Sun photo by Don Moore

“I recall a story about this young soldier who was a very well-read English major that the Army couldn’t figure out what to do with,” she said. “So he was assigned KP duty and ordered to clean out the grease traps — one of the nastiest jobs in the military.

“He went into the grease trap to clean it out one morning and disappeared. They found him hours later sitting in the bottom of the trap with his gas mask on reading a book,” Leiser said with a chuckle.

When the war was over in 1945, Leiser took the G.I. Bill and majored in economics at the University of Miami. She attended a bit of law school after graduation, but ran into Fred, who became her husband of nearly 60 years, who had served as an engineer and gunner on a B-17 bomber in the 8th Air Force in Europe. He was studying to become an engineer.

“I had lots of fun during World War II, but I didn’t do anything of value,” she said.

This story was first published in the Charlotte Sun newspaper, Port Charlotte, Fla. on Sept. 25, 2006 and is republished with permission.

Winifred Lesiser was born on January 5, 1920 and passed away on Wednesday, October 28, 2009. No further information is available at this time.