Ed Jaworek learned to fly this Stearman PT-17 biplane at Carlstrom Field in Arcadia, Fla.  in 1942. He flew a Mitchell B-25 attack bomber during the war. Photo provided

Ed Jaworek was a co-pilot who flew a Mitchell B-25 twin-engine attack bomber on low-level combat missions for the 8th Air Force in Europe during World War II. He took part in the Berlin Air Lift, in 1949 and piloted a C-46 twin-engine “Commando” transport in and out of Berlin. When the Korean war rolled around, in the 1950s, he flew a medical air transport C-47 “Gooney Bird” during the last months of that war. A C-119 “Flying Boxcar” was his plane during the Cuban Missile Crisis in 1962.

All four brothers in the Jaworek family of Gainesville, N.Y. were in the service in World War II. In addition to Ed, Chet served with Gen. George Patton’s 3rd Army, Hank was a Marine who fought the Japanese in the Aleutian Island invasion and Vin was a crew chief on a B-29 bomber flying missions over Japan during the last months of the Second World War.

“It was hot but we had beautiful weather when I was checked out during primary flight training in a PT-17 in Arcadia in 1942,” Jaworek recalls 70 years later. We flew 39 hours to get our wings and a promotion to 2nd lieutenant.

“We lived in tents on base and had our own mess hall right there. We never did get into town,” he said.

“I took advanced training at Bennet Field, Ga. and flew an AT-6 “Texan” trainer. It was sometime after that I was introduced to the B-25 “Mitchell” bomber. “It was noisy, but she was a good plane.

“We flew from Westover Air Force Base, Mass. to Tulle, Greenland and from there to Ireland and finally to Londonderry Air Force Base, about 20 miles outside London, England,” the 91-year-old former major explained.

“I was in the 434th Bomb Group, 8th Air Force, Jaworek said. “All we did was a little bombing in France, Netherlands, Poland and Germany. 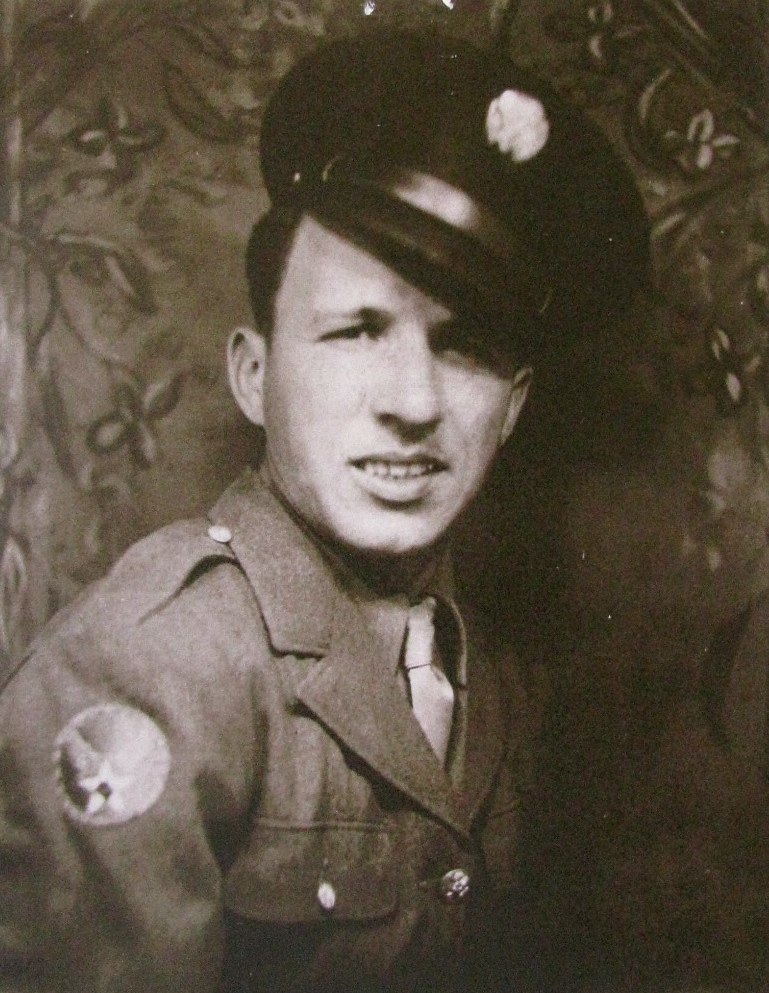 Second Lt. Jaworek was a jaunty devil, shown here about the time he graduated from advanced flight training at Bennett Field, Ga., before flying to the war front in Europe to provide tactical air support for Gen. George Patton’s 3rd Army. Photo provided

“Stuttguart, Germany is the bombing run I remember best. We bombed the hell out of that city on a number of occasions,” he said. “There was a lot of flak from German 88 anti-aircraft guns. I got hit in the right side of my face with shrapnel that came in the plane’s side window.

“Our B-25 lost its hydraulics on the way home. Despite the fact the flight engineer poured a couple of extra gallons of hydraulic fluid into the system we couldn’t get the plane’s wheels down when we returned.

“We belly landed the plane at Londonderry and tore up the underside of the bomber. However, nobody on board was seriously hurt in the crash,” Jaworek said.

He and the other four members of his B-25 crew spent the last eight months of the war attacking Hitler’s diminishing forces throughout Europe. When it was over he and his buddies went home and joined the Air Force Reserve.

When the the Soviet Union blockaded Berlin and U.N. forces had to launch the “Berlin Airlift” to feed the capital city’s people, Jaworek was called back into the service to fly food and coal to the beleaguered Berliners.

“I flew a C-46 transport into Berlin toward the end of the airlift,” he recalled. “It was fly in, drop your stuff off, and get out of there. We would’t even get out of the plane. We’d have a cup of coffee and maybe a sandwich in the plane and leave.”

It wasn’t too long after the Soviets capitulated in Berlin that the Korean War broke out in June 1950.

“I got called back in the Air Force and flew C-47 twin-engine transports in Korea. It was a medical air transport plane I was flying for the 17th Medical VAT,” he said. “We flew out of a town just north of Seoul I can’t recall anymore. We took patients and R and R people to Clark Air Force Base in the Philippines. We’d fly back to Korea with soldiers and Marines on board.

Ed and all three of his brothers served in the war. From left, Chet served in Patton’s 3rd Army, Hank was a Marine who erved in the Aleutians, Ed was a co-pilot in a B-25, and Vin was a crew chief on a B-29 “Superfortress” who flew missions over Japan at the end of the war. Photo provided

A decade later Jaworek was called back into the regular Air Force and took part in the 1962 Cuban Missile Crisis.

“At that time I was flying C-119 ‘Boxcar.’ It was a paratroop carrier. I picked up a couple of loads of 82nd and 101st Airborne troopers and was going to drop them into Cuba when the whole thing was called off,” Jaworek said.

He retired from the Air Force Reserve in 1975 with 12 years of regular Air Force service since World War II and the remainder of his time in the reserves. Jaworek went to work for the Erie Township Tax Collector where he spent 24 years of his working life.

In 1993 he moved to Port Charlotte and retired. He has been married three times and has 10 grown children: Pete, Robert, Ed, Dave, Jim, Gary, George, Kelly, Steve and Dorothy.

This story was first published in the Charlotte Sun newspaper, Port Charlotte, Florida on Wednesday, Jan. 2, 2013 and is republished with permission.

Click here to view the collections in the Library of Congress.

Major Edmund C. Jaworek, age 94, passed away on Saturday, March 26, 2016, in Florida. He lived in Harborcreek Township. He was born in Gainsville, New York, on March 21, 1922, son of the late Frank and Nellie Kozmcek Jaworek.

He retired from the United States Air Force Reserves in 1975. Ed served as a Bomber Pilot during World War II and Korea and also with support units during the Cuban Missile Crisis. He was Commander and Air Show Chairman in the Air Force Association of the Erie Chapter. He held positions as a supply duty officer in the Civil Air Patrol Erie Chapter, Group 50. He held an assignment as a liaison officer for the U.S. Air Force Academy.

Edmund was elected Harborcreek Township Auditor and Tax Collector for 20 years. The Major operated The Dutch Farms Company poultry and cheese stores in the old Central Market and then the New Central Market.

He was a member of the East Erie Moose # 593 and the American Legion, Carl Neff Post.

Survivors include his children, Edmund C. Jaworek and wife Tina, Sandra Hibbs and her husband Michael, Lisa Phelps and her husband Patrick, Jim Tolon and his wife Christine and Dave Tolon and Cindy McLaughlin. He is also survived by his sister, Helen Blazek, his brother, Stephen Jaworek and his wife Linda, and many grandchildren and great-grandchildren.

He was preceded in death by his wife of 20 years, Dorothy, his son, Dr. Terrance Jaworek, two sisters, Sophie Kilar and Loretta Donikowski, and two brothers, Hank Jaworek and Chester Jaworek.

Friends may call at the G. R. Bailey Funeral Home, 4396 Iroquois Ave., Lawrence Park, on Friday from 2 to 5 p.m. and from 7 to 9 p.m. where a funeral service will be celebrated Saturday morning at 10:00 a.m. Burial, with full military honors, will follow at St. Gregory Cemetery.