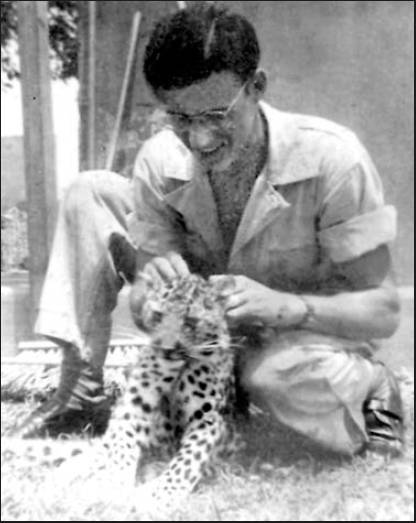 Sgt. Pete Chisholm of Port Charlotte, Fla. with his spotted leopard. He got the cat while serving near Calcutta, India, during World War II. Photo provided by Pete Chisholm

It wasn’t the brightest move on his part, former Sgt. Pete Chisholm admitted more than 60 years later in the comfort of his Southwest Fla. apartment.

“I volunteered to help some of Merrill’s Marauders out. At the time I was an engineer on a C-47 (twin-engine transport) flying out of Dum-Dum Air Base just outside Calcutta. On most of the 47 combat missions I flew with the 846th Air Force Base Unit, we brought in soldiers and medical supplies,” the 85-year-old resident of Essex House said.

This flight was different.

“The major, who flew the C-47 I was engineer on, asked me if I would go on a secret mission with him. He couldn’t tell me about the mission until we were in the air,” Chisholm recalled. “I agreed to go. When we were airborne, the major told me we were flying into Burma to pick up some of Merrill’s Marauders who got separated from their main unit.”

Col. Frank Merrrill led an attack on the Japanese all-weather air base at Myitkina in northern Burma. It was from there enemy fighter planes attacked American pilots flying “The Hump,” the Himalayan Mountains. The Americans were flying from India to China with transports filled with 55-gallon drums of gasoline for Chinese troops fighting the Japanese.

Merrill put together the 5037 Combat Unit (Provisional), nicknamed “Merrill’s Marauders” by a newspaper reporter writing about their exploits during World War II. The Marauders fought their way through 800 miles of dense jungles, swamps and over mountains to reach the enemy base. They captured and secured Myitkina for Allied forces.

There was a special navigator aboard the secret flight that Chisholm agreed to make. The navigator’s job was to help them find an airstrip the Marauders cut out of the jungle.

“We landed our C-47 on a bamboo runway they built. I told the major as we were flying in, ‘It looks awful short,'” he said. “We had no trouble landing. The minute we landed the major said, ‘Pete, get those Marauders in here!

“At the end of the runway was a bunch of elephant grass. I hollered for them to come out. Nothing! Finally I called them every name I could think of, and they came storming out of the tall grass.

“I put them to work turning the plane around on the runway so we could take off. They all climbed aboard the transport. There were a couple of dozen of ’em, as I recall. Their clothes were in pretty rough shape, but I didn’t see any wounded men. About the only thing they had with them were their rifles.

“We weren’t off the ground when we reached the end of the bamboo runway, but the major kept right on flying the plane through the bamboo until we were airborne. He did a damn good job of flying that C-47,” Chisholm said. “That was when my trouble really began. We had so much debris in the engines they were overheating and in danger of catching fire.

“I was jockeying with the engines until we got back to base an hour or two later. As one engine would get a little bit hot, I’d cut her back and load up the other engine. By the time we were back down on the ground, both engines were smoking to beat the band. I called for a fire truck to cool the engines down,” he said.

When he flew into Myitkina the first time, the Marauders were still taking it away from the Japanese. The tail section of his C-47 was so badly damaged it had to be replaced. 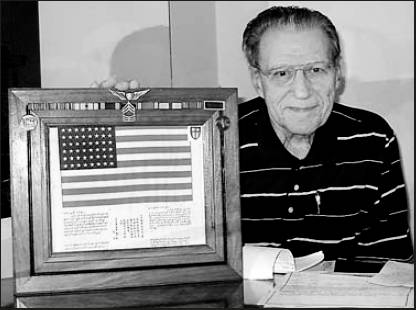 Former Sgt. Pete Chisholm who lives in Essex House, Port Charotte, Fla. is pictured with a ‘Blood Chit’ in a frame and his World War II ribbons and medals attached. The American flag with Chinese writing below was worn on the back of his flying jacket. Sun photo by Don Moore

“I was working on fixing the tail of our plane when a lieutenant walked up and wanted to know what I was doing. I explained and he said, ‘You need some protection because right across the road are a bunch of (Japanese soldiers) and they’ll be shooting at you.’ We got a platoon of soldiers to protect us while we replaced the tail of the C-47. Nobody got wounded.”

At Dum-Dum they lived in tents along the edge of the jungle. It was there Chisholm became “mother” to a baby leopard.

“We had natives working for us at Dum-Dum. They would wash down the planes. One day one of them came in with this little fluff ball. It was a baby leopard whose mother had been killed.

“‘I knew if I brought him in you’d take care of him,’ the native told me. It was a friendly little devil. I become its mother. He slept with me. When I would take him on a walk on a leash, the cat would clear the walk of soldiers.

“It pays to have friends in the military. The mess sergeant always made sure, when he got off duty, that he brought me some meat for my leopard. At the end of six months the cat had gotten pretty big. I knew I was going to have to get rid of him. I was thinking about giving him to the Calcutta zoo.

“A short while later I went on a night flight. When I returned my leopard wasn’t in my tent where I left him tied to my bed. I asked where he was and someone told me he had been poisoned.

“Another fellow, two tents down, had a black bear. He was also poisoned the same way on the same night. We never found out who did it.

“You couldn’t ask for a better pet. I really loved that cat,” the old soldier said. With eyes downcast he shook his head but said no more.

This story was first published in the Charlotte Sun newspaper, Port Charlotte, Fla. on Sunday, Feb. 5, 2006 and is republished with permission.