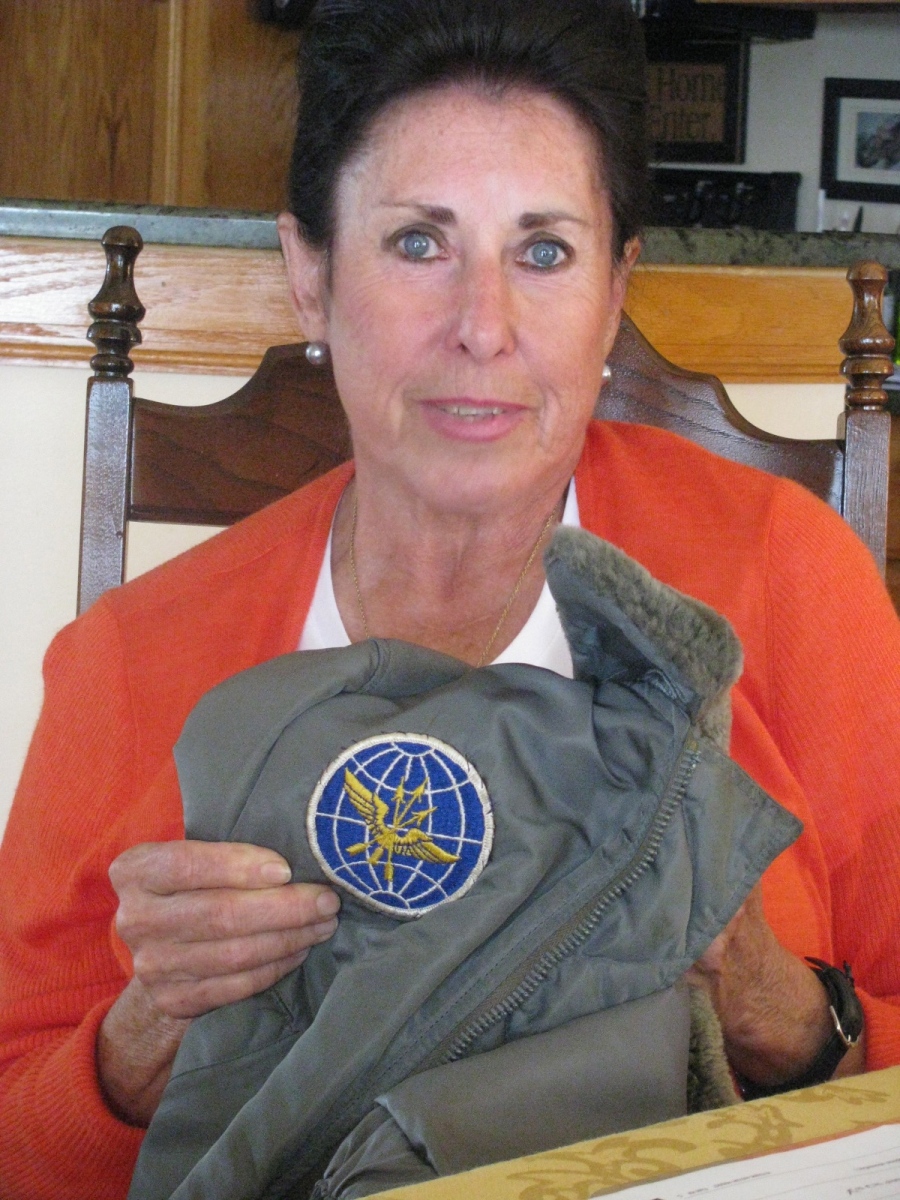 Carr holds an Air Force jacket she wore in the service. It has the shoulder patch of the Military Air Transport Command. Sun photo by Don Moore 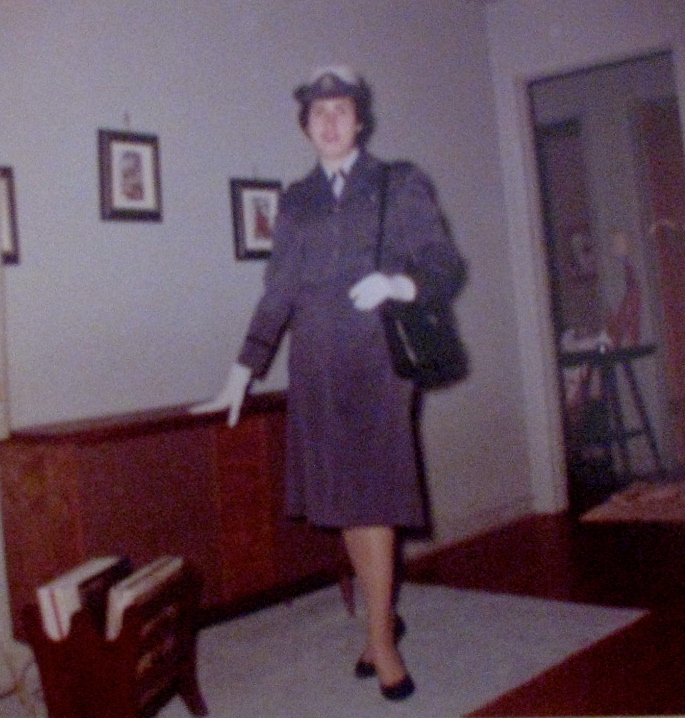 Jean Carr was an Air Force nurse during the Cuban Missile Crisis and the Vietnam War in the 1960s.

“I wanted to be a history teacher, but my patents didn’t have the money to send me to college for four years. They decided my twin sister, Joan, and I could both become nurses. So we went to St. Francis Hospital School of Nursing in Peoria, Ill. for three years and became RNs. It was the best decision they ever made,” the 74-year-old nurse explained sitting at the dining table in her Burnt Store Isles home south of Punta Gorda, Fla.
“My sister, myself and a friend all signed up for the Air Force nursing program after we got out of nursing school. An Air Force recruiter told me if we joined the Air Force we would not only be nurses, but we’d also get to see the world.

“The three of us ended up in Barksdale Air Force Base in Shreveport, La. For a little Chicago girl who had never been out of the state of Illinois it was like going to a foreign country going down south in 1960s,” she recalled. “We took a train from Chicago to Barksdale and we saw segregated bathrooms and water fountains for the first time down south. I was just 21 and it was an eye opener.

1st Lt. Jean Carr was aboard this C-131 Samaritan serving as a flight nurse on this Air Force transport taking wounded soldiers home. They’re flying over San Francisco Bay with the Golden Gate Bridge below. Photo provided by Jean Carr

“We had three weeks of basic training in Montgomery before we arrived in Barksdale. We went to basic with doctors and dentists. All we did was get our uniforms and march in straight lines for hours,” Jean said.

“We were assigned as regular hospital ward nurses when we arrived at Barksdale. They had a very small hospital with 25 beds. So we worked in the clinic for a while, then we worked in the wards for a while and then in the emergency room. That was the beauty of our job, we provided nursing for the whole base,” she said.  “Because Barksdale was a SAC (Strategic Air Command) bomber base, if we wanted to go flying with the I.G.s people (Inspector General’s people) we could.

“We spent a month one time flying all over Europe and the Middle East with the I.G.s people when they were checking out bases,” she said. “I remember on this trip we were flying into a base in Libya and we had to circle the field while they got the camels off the runway.

“We stayed a couple of days in Libya. They wouldn’t let females go off the base. It was very interesting but very backward,” Jean recalled remembering her trip to the Middle East 50 years ago.

“Living at Barksdale was an interesting place for a young nurse. From the back door of my house I could see a couple of B-52 bombers sitting on their concrete pads loaded with nukes. They were always on alert ready to go.

“One of the perks of being an Air Force nurse, we could go down to the flight line and if we had a weekend off we could hop a flight to Puerto Rico. As long as we got back to base in time for our next shift we were okay.”

They took mini vacations all over the world on their time off.

“After a two year tour at Barksdale we were assigned to Kindley Air Force Base in Bermuda. Today it’s a Navy station, but in those days in was a refueling stop for planes flying in from Europe and elsewhere,” she said.

“This was about the time of the Cuban Missile Crisis in ’62. We were all part of that in Kindley. They issued us helmets, flak vests and rifles. We didn’t have a clue what to do with our rifles so we put them under our beds,” she said.

“While at Kindley we even set up a hospital room to take care of a space monkey. The monkey that was part of the U.S. space program was suppose to come to our hospital after his capsule splashed into the sea, but it never did. It went somewhere else.

“Kindley is where I met my husband, Dick. As a 1st lieutenant he was flying a C-131 “Samaritan” for the Military Air Transport Command. His plane developed mechanical problems and they made an emergency landing at Kindley.

“I knew his copilot, who was married. The two of them were in the officers’ club on base. Dick, my future husband, was playing the slot machines at the club and didn’t have time for me. He finally did meet me and we started dating. 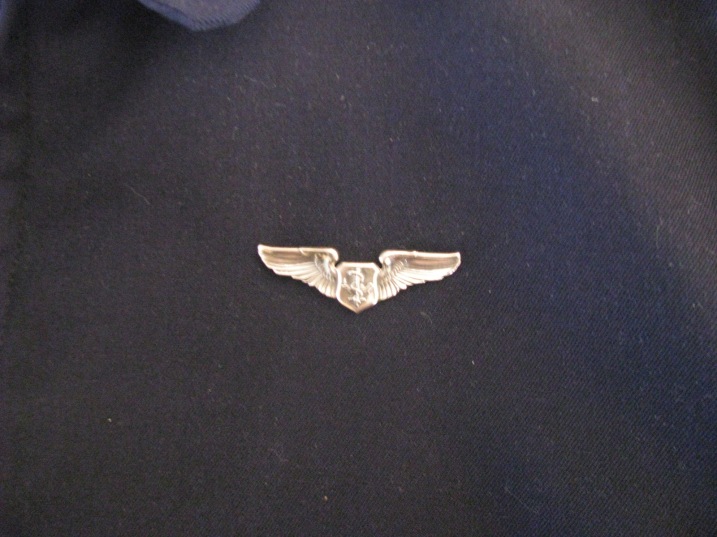 These are Carr’s Air Force nurse’s flight wings she wore on her uniform. Sun photo by Don Moore

“When he became a captain Dick went to Vietnam in 1962 as an advisor to the South Vietnam Air Force,” Jean said. “When he was overseas we stayed in touch by letter. He wrote me letters all the time when he was over there.

“By then I had been transferred to Travis Air Force Base in California. It was there I became an Air Force Flight Nurse,” she said. “I was assigned to an air bus that took military patients all over the country.

“We flew all over the West Coast with patients in a C-130 transport. Eventually I was transferred to a C-141 jet transport that could fly 40 mental patients and 40 ambulatory patients at at time.

“I still have tears in my eyes over some of them. There was one young man who died on a flight home with me,” she recalled. “I couldn’t get him home in time. I still think of the guy.

“When Dick finally got home from Vietnam in 1966 we got married. Then I got pregnant and was forced out of the Air Force nursing program at that point,” Jean said with a frown. “If you were pregnant you had to leave the military nursing program. It wasn’t until 1969 when a Navy nurse contested the decision about discharging pregnant nurses that things started to change.”

She retired a captain in 1967, the year her daughter, Kelly, was born.

Carr holds an Air Force jacket she wore in the service. It has the shoulder patch of the Military Air Transport Command. Sun photo by Don Moore

For almost the next three decades Jean served as a squadron momma, a wing momma and eventually a general officer’s wife and a mother.

After Dick retired a major general from the Air Force in 1994, they moved to Punta Gorda. In 1971 the couple purchased a lot in Burnt Store Isles where they built their retirement home.

This story was first published in the Charlotte Sun newspaper, Port Charlotte, Florida on Monday, Dec. 10, 2012 and is republished with permission.