President Richard Nixon and his wife, Pat, and their entourage visit the Great Wall of China. In the crowd was Sgt. John Harms of Port Charlotte, Fla., who served aboard Air Force One, the presidential airplane. Photo provided

For 15 years Sgt. John Hames of Port Charlotte, Fla. was a flight steward aboard Air Force One.

The 68-year-old Port Charlotte veteran served four presidents — Kennedy, Johnson, Nixon and Ford — on the gleaming blue and white Boeing 707 jet emblazoned with: “United States of America” in bold, black letters. It was his duty to see that the president and his passengers aboard the presidential airplane were properly cared for and that all of the food, luggage and equipment aboard was stowed.

“All four of the presidents I served were just as different as if you had selected four people off the street. President Kennedy was a fine individual. LBJ could be a difficult person to deal with. President Nixon was okay, he accomplished a lot of things. President Ford had the ability to laugh at himself.”

From the time John Kennedy was elected president until the fateful flight to Dallas in November 1963, Hames made all the flights with JFK and his family aboard Air Force One.

“Probably my first flight with Kennedy was to the family home at Hyannisport,” he said. “On the short flight up I served him tomato soup. He liked tomato soup. He didn’t like anything heavy when we were flying.

“Before we flew with the president we would call the White House and found out what his menu was. We would prepare it aboard the plane. We made sure the president had anything he desired.

“It seemed like almost every weekend we were flying to Hyannisport or West Palm Beach with the Kennedys. And if there was something special during the week we would fly those trips, too,” Hames said.

One time when Kennedy was president, he sent Air Force One out to California to pickup a plane full of movie stars. Aboard the president’s airplane was John Wayne.

“I was quite impressed with the height of John Wayne,” Hames said.

On the weekend flights to their homes in Hyannisport or West Palm the family — Jacqueline, kids, friends and dogs — would fly on an advance flight during the day Friday. The president would follow later in the afternoon or early evening aboard Air Force One with Hames at his elbow.

“With the president would be four members of the press, some of the presidential staff and the Secret Service men,” he said. “Usually there were reporters from the Associated Press, United Press International, one of the major news magazines and someone from one of the larger newspapers.

“Around the president you were mostly seen and not heard,” he said. “You knew when to stay out of the way if he was talking to someone.”

“LBJ was completely different than Kennedy,” Hames recalled. “He made sure everyone knew he was in charge when he became president. He could be a difficult person to deal with.

“Right after Kennedy’s assassination Johnson decided to fly down to his Texas ranch for the weekend. We were flying back to Washington and I served a prime rib dinner for everyone aboard.

“On this particular trip I was working the front galley and cooking the ribs the way Kennedy’s people liked them — rare. All of a sudden LBJ came along with two plates in his hand.

“This meat is not cooked.

“It’s the way I always cooked it for President Kennedy,” I said.

“‘Don’t ever serve rare meat on my airplane again,’ the president said.

“On the next trip with President Johnson to New York I was cooking hamburgers for lunch. LBJ liked hamburgers. Needless to say, his hamburger was well done.

“As he was getting off the plane I asked him how he liked his lunch.

“He said, ‘It was pretty good, but the meat was cooked an awful lot.’

“Mr. President, on the last trip you told me, ‘Nobody was gonna eat raw meat on your airplane. I just made sure your hamburger was well done.”

Hames stayed with LBJ until he finished serving out Kennedy’s last term. Then he requested a transfer to Hawaii where he performed similar duties for three years as the flight steward for generals, admirals and politicians working for the Military Air Transport Command. When Nixon became president in 1969 he Hames was asked to return to Air Force One as steward. He did.

President Nixon, left, talks to President Leonid Brezhnev of Russia during a trip there. Photo provided

“We made trips all over the world with President Nixon. We went to Russia, China and France with the president and his staff.

“We flew to Russia when President Nixon met with Kruschev. On those flights we had more security. When we flew into Russia we had U.S. fighter jets on our wing tips all the way. It was the same when we went into China.

“In China the staff of Air Force One was invited to eat at the Great Hall of the People at the same time as the dignitaries,” Hames said. “We also went to the Great Wall of China with the president.”

Besides the world tours with Nixon, one of the other fringe benefits when he was in office were the Florida trips. Nixon spent a lot of time vacationing in Florida. When he was here the staff of Air Force One got to go fishing or do whatever it wanted to do on their own time as long as they stayed in radio contact with the airplane and were available within two hours.

What about Watergate and all that business?

“I believe Nixon was trying to do a good job as president, but he got himself in a tight situation with Watergate.”

How about Nixon’s last flight on Air Force One when he and his family flew back to California after he resigned the presidency?

“It was a relaxed flight out to California with the former president. Nobody on board was real sad. They were saying that it was over and things were going to be different now.

“Air Force One flew into El Toro Marina Air Station in California with former President Nixon and his family. They took him from there by helicopter to his home at San Clemente.” 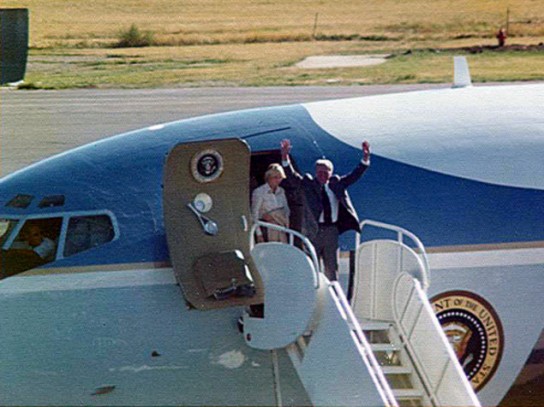 When President Gerald Ford took over from Nixon after the Watergate cataclysm the transition was seamless, according to Hames.

“This was one of the smoothest transitions we had,” he said. “The enlisted crew on Air Force One had been together since the Kennedy days.”

President Ford was a guy who didn’t take himself too seriously.

“He was a good ol’ boy,” Hames said. “At the time there was a joke going around that he couldn’t chew gum and walk at the same time. He just let it roll off of him. When he fell down the steps getting off Air Force One President Ford laughed and shook it off.”

Ford was a nice person, the retired sergeant said.

Hames home is filled with memorabilia from Air Force One and his connection to four presidents.

There are copies of paintings of the White House in the snow from JFK and LBJ hanging in the living room. In the dining room is a set of five prints Nixon gave him of the founding fathers — Washington, Jefferson, Monroe, Lincoln and Theodore Roosevelt.

The foyer to his home has a lighted display cabinet filled with memorabilia from his years in the military gathered while flying on the president’s plane. A small silver globe of Sputnik flying around earth from Russia is on the bottom shelf. There are also painted perfume bottles from China, an elaborately decorated silver cigarette case and matching lighter with the national seal of Indonesia on both, jade grapes from China, two small Ivory lamp bases from India, a gilded gold rose from Austria and many more items from his association with Air Force One.

Asked if he would reup if he got to be a steward aboard Air Force One again, Hames said:

This story was first published in the Charlotte Sun newspaper, Port Charlotte, Flo. on Monday, Nov. 30, 2003 and is republished with permission.