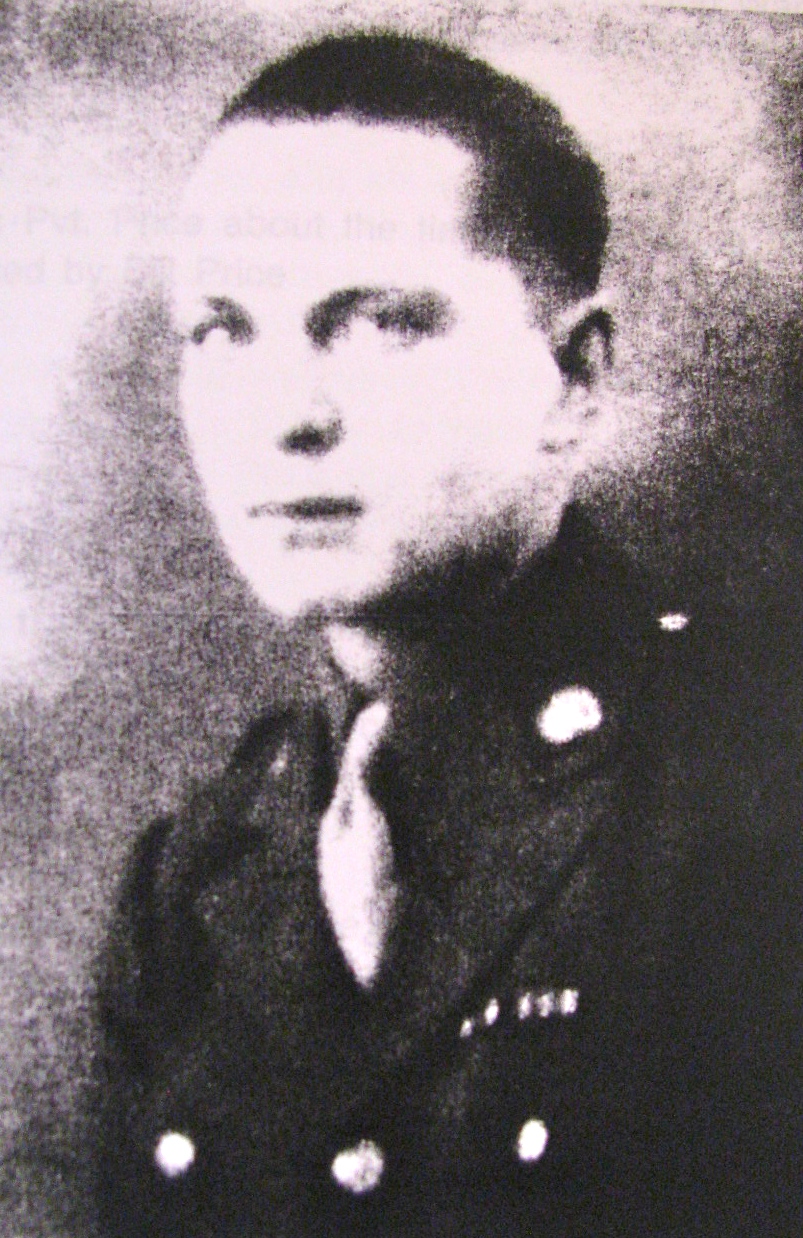 This was Pvt. Bill Price of Port Charlotte, Fla. about the time he graduated from boot camp at 20 in 1942. Photo provided by Bill Price

Bill Price, who lives in Oxford House, Port Charlotte, was driving a 2 1/2-ton Army truck onto the beach at Normandy, France, D-Day, 60 years ago in June.

He was a member of the 32nd Field Artillery Battalion attached to the 18th Infantry Combat Team, part of the 1st Infantry Division — “The Big Red 1.” The division was eventually part of Gen. George Patton’s 3rd Army that swept across France, Belgium, Germany and ended up in Hof, Czechoslovakia on VE-Day when the war in Europe ended on May 8, 1945.

Price’s military odyssey began on Dec. 23, 1942 when he was drafted in the Army from his hometown of Cleveland, Ohio. Eventually he was sent to North Africa as a replacement soldier and ended up with Gen. Patton at the very end of the Sicilian Campaign as a deuce-and-a-half driver. From there the 1st Division and its associated units, which included Price and his truck, went to England.

It was the summer of 1943 and the American troops in England spent most of the next year training for the D-Day invasion they thought would never come.

“Most of the men in our unit were hot shots because they had already fought two campaigns, North Africa and Sicily, and we were replacement soldiers,” he recalled. “We spent much of our time in England at the range firing our 105s (cannons). When we weren’t doing that we were practicing landing in landing craft that would take us and our truck to France in the months ahead.”

They were stationed near Dorchester in the south of England. When they weren’t firing guns at the range or hitting the local beach with their landing craft, Price and his buddies were checking out the entertainment in London or some of the smaller towns closer to base.

“It was a great time to be 23 and single,” the old soldier said. “England was nice and the Army gave me a new GMC truck to drive.”

By May 1944 it was obvious things were heating up. The invasion of Nazi-occupied Europe was about to happen. Price and his buddies were relocated from Dorchester to the south coast port of Portland Bill, England.

“For the last couple of weeks, before the invasion, all we could think about were our trucks. We had to run them off the landing craft into war before we reached the beach,” he explained. “We had to waterproof the engines so they didn’t stall out. We also ran the engine exhaust up in the air so water didn’t get in.”

On the night of June 5, 1945, Price and his truck, along with six or eight more trucks, drivers and their assistants were loaded aboard an LCT (Landing Craft Tank) at Portland Bill.

“We arrived off the coast of Normandy the next morning in our LCT about 6:30 a.m. We sailed in circles, a bunch of LCTs, for three or four hours until the beach master gave us permission to come in,” he said. “It was 12:30 p.m., June 6, 1944 when our LCT came into Omaha’s Green Beach and dropped its ramp. My truck was the first one off the LCT. It dropped into four feet of water that reached just below the seat I was sitting on. I got my feet wet, but that was about it. The engine didn’t miss a beat. I drove the truck through the last 100 feet of water before reaching the beach.”

Price’s job was to get his truck off the invasion beach and over the first sand dunes to the staging area further inland. To accomplish that his was the lead vehicle that had to drive through a mine field. It had sandbags on the floor to help protect him and a young, green lieutenant, who was riding up front with him, from exploding mines.

The lieutenant ordered the troops they were transporting out of the truck for their safety. He told them to walk in the truck’s tracks across the invasion beach. That way they would be safe because the truck would be first to hit an enemy mine.

The 1st Division’s front line soldiers had already crossed the invasion beach and were beginning to move into the hedge rows that surrounded the fields of the French farmers along the coast. Omaha Beach was cluttered with support troops who were moving all over like ants as Price and his truck rolled through.

Dead American soldiers were scattered here and there on the sand. From time to time the truckers in his unit faced hostile fire from enemy rifles and mortars. It wasn’t sustained fire as it had been hours before when the initial assault was made.

Price reached the staging area and moved on into the hedge rows in the early afternoon of the first day.

“We stopped at a little farm. There was a couple of dead American soldiers lying in the dirt outside the farmhouse and a dead German in a nearby foxhole,” he said. “I pulled in with my truck about 50 feet from the farmhouse. An old man and woman came out and began removing the shoes from the dead Americans.

“I told them, ‘If you take their shoes off you’re dead!’ They went back in the house.”

That was Price’s first encounter in Nazi-occupied France on Day One of the Allied invasion of “Fortress Europe.” He would survive the war without a scratch despite all the awful things he saw during the final 11 months of the war in Europe.

What he remembers most vividly that first day was the death of his best buddy, Sgt. Chester Bolton. He was killed on Omaha Beach when struck in the throat by an enemy bullet.

“I never got over his death. I still break up today when I think about him dying there on the beach that first day,” Price said six decades later with tears in his eyes.

By VE-Day Price had received five bronze battle stars for taking part in five major campaigns: Normandy, Northern France, Rhineland, Central Europe and the Ardennes. He had a bronze arrowhead for landing on Omaha Beach, a European Theater medal and a Bronze Star with a “V” for valor.

The accompanying commendation that goes with his Bronze Star reads:

“Private William C. Price, 35526162, Battery A, 32nd Field Artillery Battalion for heroic achievement in connection with military operations against the enemy in the vicinity of Saurent-Sur-Mer, Normandy, France 6 June, 1944. Despite heavy enemy machine gun, mortar and artillery fire directed on the invasion beach, Pvt. Price fearlessly crossed uncharted mine fields and at great risk assisted in establishing and maintaining communication between the battalion command post, fire direction center and the artillery batteries. Pvt. Price’s heroic action and unswerving devotion to duty contributed materially to the effective bombardment of hostile installations.”

This story was first published in the Charlotte Sun newspaper, Port Charlotte, Florida on Sunday, May 2, 2004 and is republished with permission.