This is Harry Kaplun on Sept. 11, 1943 shortly after graduating from jump school. He served in the 11th Airborne Division in the Pacific during the Second World War. Photo provided

Harry Kaplun, who has lived in Venice, Fla. for more than 30 years, was a 22-year-old paratrooper who made a number of jumps as a member of the 457th Field Artillery Battalion of the 11th Airborne Division while fighting in the Pacific during World War II.

The 88-year-old local man was part of an invasion force that rescued more than 2,300, mostly Americans, held by the Japanese in Los Banos Prison Camp in the Philippines on Feb. 21, 1945.

“One paratrooper regiment in our division jumped into the camp and surprised the Japanese guards who were in the process of doing their morning calisthenics,” he said. “They were overwhelmed by the American airborne force. There was little resistance and no American was killed.”

For a few minutes the bewildered prisoners weren’t sure who had rescued them. When they realized what happened to them in a couple of minutes, the detainees were rounded up and put aboard landing craft for the trip across a nearby lake to the Allied side where they were put in Bilibid Prison the Americans were using as a hospital.

The mostly American ex-prisoners had spent the last four years as prisoners of the Japanese. They were primarily civil servants, Catholic priests and nuns taken into custody about the time the Japanese bombed Pearl Harbor forcing the United States into World War II.

“One of the priests we liberated was Father Quinn. He taught school at Fordham University. I asked him if he got back to New York to call the girl I was going to marry, whose maiden name was Quinn. He did call her when he got back to the states,” Kaplun recalled.

After their successful rescue of the prisoners, the 11th Airborne was sent to a rest camp at Lipa, Philippines.

“We were to stay there until Nov. 10, 1945 when we were to begin the invasion of the Japanese home islands,” he explained. “The atom bomb was dropped on the Japanese in August and we were the first Americans to fly into the Tokyo airport two days before Gen. Mac Arthur signed the surrender aboard the Battleship Missouri.

“We had flown from Okinawa with full field packs, our weapons and a couple of parachutes. It was a little strange when our C-54 transports landed and we got off the plane,” he said. “Thousands of Japanese soldiers were standing along the edge of the runway with their backs to us as a sign of respect. After the surrender was signed we became part of the occupation force. 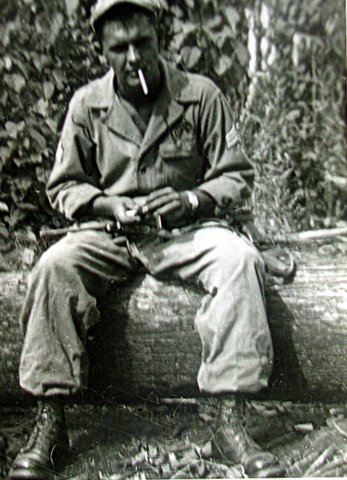 Checking his carbine during a break in the fighting in New Guinea. Photo provided

“We lived along the coast of the northern most home island. We lived in barracks which we were told had been part of the Japanese Army’s equivalent to West Point. During the time I was there the Japanese people were very friendly to us.

“Just before I was scheduled to go home tragedy struck. The pot bellied stove that heated our barracks caught fire one night and five of our troops burned to death,” Kaplun recalled. “It was Dec. 5, 1945.”

When he return to the States and got a chance to visit the parents of one of the young soldiers who died in the barracks fire in Japan, another tragedy hit home.

“When the parents of the dead trooper got word their son survived World War II, but had died in the fire they both committed suicide,” Kaplun said as he grimaced and shook his head 60 years later.

I was discharged from the Army on Jan. 20, 1946,” he said. “I joined the Nassau County Police Department, the third largest police department in the country. When I retired after 24 years, I was the commanding officer of the forensic department.” 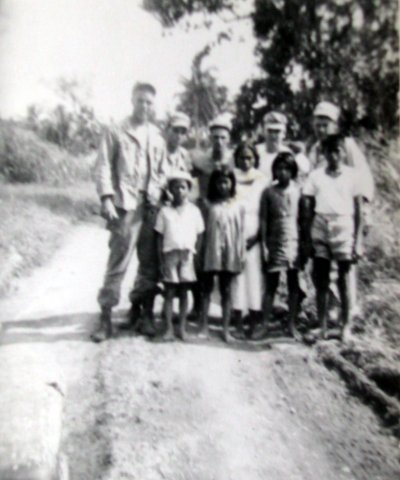 Kaplun and his buddies with several Philippine children. He’s the guy in the back row second from the right with the cap. Photo provided.

Then he went to work at Metropolitan Hospital in Manhattan, one of the seven hospitals in New York City. He stayed there until he was 58 and his youngest son graduated from college. He retired once more.

Kaplun and his late wife, Mary Elizabeth, moved to Venice in 1978. She died four years ago. They have three sons: Harry, Richard and Paul, seven grandchildren and four great-grandchildren.

This story was first published in the Charlotte Sun newspaper, Port Charlotte, Florida on Monday, Aug. 6, 2012 and is republished with permission.