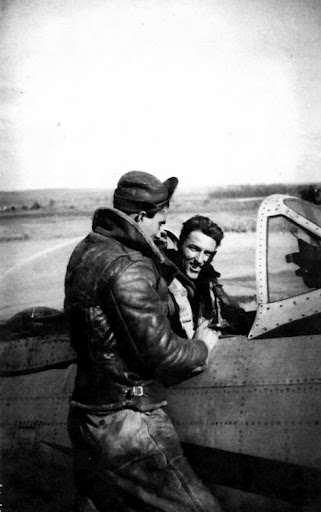 Sgt. Nolan stands on the wing of the P-47 Thunderbolt fighter he maintained for 2nd Lt. Mike McGraph, in the cockpit, as he gets ready to take off on a mission in Europe during World War II. Photo provided.

Richard Nolan of Deep Creek, Fla. enlisted in the Army a year before the United States entered World War II, never dreaming it would be a six-year, world-shattering event for him and the rest of the human race.

He ended up as a sergeant and a fighter plane mechanic who fought in eight major campaigns from North Africa, through Italy, France and Germany before the war was over. It was his job to keep a single P-40 Warhawk and a P-47 Thunderbolt in the air 24-7 during the conflict.

The 85-year-old just moved to this area in December from Bonita Springs, Fla. where he and his wife, Mary, had lived for 24 years. When he went in the service he was living with his parents in Yonkers, N.Y. He was 21 at the time.

Late in ’42, the group boarded ships in San Francisco and took a slow boat by convoy to Egypt. They reached the land of the pharaohs 46 days later and were initially stationed in El Amirya, Egypt. By March 1943 the 324th was in Libya, attached to Gen. Bernard Montgomery’s English 8th Army in North Africa. Nolan’s P-40 unit provided tatical air support for the British troops, who were slugging it out with Gen. Erwin Rommel’s forces in the Libyan desert.

“When we went to North Africa and were attached to the British 8th Army, we had British uniforms, British tents and British chow. The only thing British we didn’t have were our P-40s,” Nolan recalled. “We ate ‘bully beans’ and pea soup. It was tough chow. The British soldier did get his beer ration — and so did we — and of course always made a pot of tea, no matter what.”

The soldiers in his squadron were so desperate for American grub they took up a collection, and one of the truck drivers bought some pasta and tomatoes and cooked spaghetti in the aluminum nose cone spinner that was to go on the front of a P-40’s propeller. It was great grub for a change, he said.

By 1943, Montgomery, with the aid of the American forces, had run the “Desert Fox” out of North Africa. At that point, the 324th Fighter Group joined Gen. Mark Clark’s 5th Army in Italy.

The P-47 Thunderbolt was the premier ground support fighter in WW II. It did more to wreck German mechanized units than any other plane in the American arsenal. Photo provided by Richard Nolan.

In October 1943, Nolan’s unit ended up in Cercola, Italy, at a grass runway near the base of Mount Vesuvius when the legendary volcano erupted.

“It was the most fantastic thing I ever saw. It started smoking and then there was lightning and the weather was getting worse and worse,” he said. “It just so happened we had USO troops putting on a show on the back of a flatbed truck, and they kept right on performing.

“The stars in that show were John Garfield, Sterling Holloway and Leo Durocher’s wife, Laraine Day.

“Eventually the mountain erupted after the show, and lava started creeping down the mountainside toward the towns of San Sebasiano and Certola.”

The Yonkers Record, Nolan’s hometown paper, picks up the story from there: “Sgt. Richard Nolan of Yonkers was on his way with an empty Army truck to Naples just at the moment officials decided to evacuate the two little towns. For 36 hours, working within sight of the huge wall of white-hot rock crawling toward the towns at five feet a minute, he carried truckload after truckload of frightened villagers and their pitiful effects to places of safety.

“Sgt. Nolan made his way time and time again through this madhouse to get his families out of the path of the devastating stream before their houses were swallowed up. After a day and a half of this, the lava started slowing up and eventually stopped. Not a single life was lost and one very tired driver was free to take his truck back to his unit at last.

“Sgt. Nolan is a member of a famous fighter group that fought its way through the desert into Tunisia with Gen. Montgomery’s legendary 8th Army. He is now dealing heavy blows at the stubbornly retreating Germans in Italy.”

Nolan lost his first pilot in Italy. Second Lt. John Morgan of Chicago was flying his P-40 on a ground support mission over the abbey at Monte Casino when his plane was hit by enemy ground fire and exploded in the air.

Most of the rest of the time, he assisted 2nd Lt. Mike McGrath of New York City. Like Morgan before him, McGrath began by flying the out-dated P-40, but eventually switched to the far superior P-47 Thunderbolt, possibly the best ground support airplane in WWII.

The 324th Fighter Group took part in the 7th Army’s invasion of Southern France in mid-August 1944. It set up shop at the big French air base at Istres.

Just before the Battle of the Bulge in December 1944, Nolan and a half-dozen other sergeants in his unit were sent back to England to electronics school. He recalled it was a “picnic for us.”

That is, until the German offensive. The Americans were desperate for rifle-toters, and Nolan and his buddies were about to be rounded up and shipped to the front to hold off the Germans’ largest assault on the Western Front during WWII.

“Five or six of us sergeants went over the hill and hitchhiked back to our unit stationed in Luneville, France,” Nolan said. “They were glad to see us back when we arrived because they were desperate to keep the P-47s flying during the Battle of the Bulge. We were busy night and day for weeks keeping every plane we had flying in support of our ground troops.”

After the Bulge and the collapse of German forces on the Western Front, Nolan’s 324th Fighter Group ended the war at an airfield in Stuttgart, Germany.

Richard Nolan of Deep Creek, Fla.looks at a pile of pictures he took during World War II. He was a ground crewman in charge of keeping a P-40 Warhawk and P-47 Thunderbolt fighter in the air. Sun photo by Don Moore

This story was first published in the Charlotte Sun newspaper, Port Charlotte, Fla. on Sunday, Oct. 23, 2005 and is republished with permission.