Skip Libby is pictured in his Marine Corp graduation picture taken in 1963 after surviving Parris Island, S.C. boot camp. He was among the first Marines to be sent to Vietnam in 1965. Photo provided

Two days after graduating from high school in 1963 Skip Libby of La Casa mobile home park in North Port, Fla. joined the Marines and went to Parris Island, S.C. for basic training. Two years later he was sent to Vietnam as a member of the 3rd Marine Division, the first division of Marines in country.

“We got off the plane at Da Nang and I spent the next month in a foxhole around the perimeter of the airfield,” he said. “The first night I remember seeing tracer bullets fired by VC (Vietcong) at the other end of the field. I was so stupid, I thought they were shooting off fireworks for us.

“After filling sandbags for several months I lucked out and became the Jeep driver for an intelligence colonel who spent much of his time checking out the aftermath of enemy attacks in our area,” Libby said.”All I had to do was keep my Jeep ready 24-7 in case the colonel wanted to go somewhere.”

He recalls a day at ‘China Beach” that made an impression on the 21-year-old Marine lance corporal.

“It was a beautiful beach with beautiful women. ‘China Beach’ was a recreation area where servicemen could chill out for the day,” he explained. “Since I didn’t drink, one of my big sources of income was to sell the two tickets we each got for two cans of warm, 3-2 beer. I got a buck for each ticket and that was big money in those days. 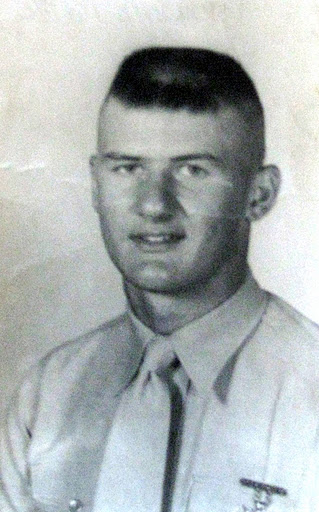 “Pot was rampant over there among the troops. Some of the guys who worked in the mess hall would trade table scraps that solders threw away with the Vietnamese for marijuana. We all saw them swapping the scraps for pot that was passed right through the fence,” Libby said.

Although he was never in any big fire fights with the enemy, he said if things were going to happen that involved the VC or the the NVA (North Vietnam Army) it usually happened at night.

“I remember being on perimeter guard one night and someone fired a flare. We could see the VC on the other side of the barbed wire getting ready to fire their mortars at us,” Libby said. “When the mortars started raining down on us that was the scariest moment of our lives. You could hear the mortars whistling as they were coming in. You never knew where they were going to hit.

“Two foxholes over a Claymore mine went off. Come to find out the next morning those Marines had killed a water buffalo with their Claymore. It was a big deal because water buffalo were sacred animals over there.

“Listening to ‘Hanoi Jane’ on the radio was a hoot. She had a regular radio program where she played music. She was always telling the G.I.s to go home because the people back home didn’t appreciate what they were doing over there.

“The first big Marine field operation in Vietnam was called ‘Operation Starlite’–Aug. 17-24, 1965. By that time I was on my way home and wasn’t involved in the operation,” he said.

“I’ve been asked, ‘Did I kill anybody over there?’ I honestly don’t know. I sprayed the area in front of me with bullets, but I don’t have any idea if I killed anyone. My whole life I told myself I didn’t kill anyone in Vietnam. I certainly hope I didn’t,” the 68-year-old Marine said.

‘After 13 months in Vietnam I came home and that was a real experience,” Libby recalled. “We flew into San Diego on a commercial plane and transferred to buses in a hanger at the airport. When we got off the plane we were surrounded by a chain-link fence. These teenage kids on the other side of the fence were spitting on us and calling us names.

“The thing that hurt the most, I couldn’t hit ’em. I wanted to go over and punch these kids out, but they were protected by the fence. We knew nothing about the Vietnam protests in this country and what was going on over here.

“These kids who were protesting hadn’t been in Vietnam and seen what we’d seen,” Libby said. “When you see 20 0r 30 body bags all lined up with bodies in ’em then you could say you’ve been there and seen something. But these kids hadn’t been there.

After being discharged from the Marines, he spent the next 20 years working for the Portland, Maine Fire Department. At the same time he joined the Coast Guard Reserve and served two days a month as Coast Guardsman.

“I spent 32 years in the Coast Guard Reserve and retired as a Petty Officer 1st Class in 1995,” he said. “I worked as a marine safety officer. We checked all the ships that came into port to make sure they were in compliance.”

Libby and his wife, Karen, moved to La Casa in 2005 after he retired from the fire department. They have four children: Joseph, Michael, Kristine and Todd.

This story first appeared in the Charlotte Sun newspaper, Port Charlotte, Fla. on Monday, Feb. 6, 2012 and is republished with permission.