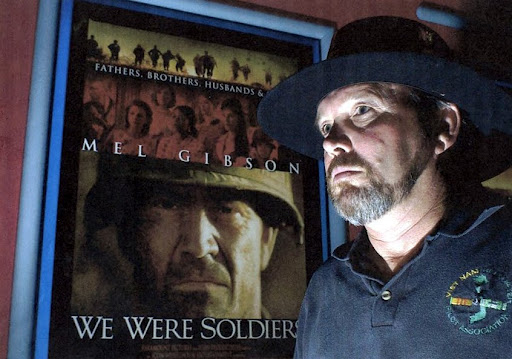 Mike Goff of Punta Gorda, Fla. was a member of the “Banshees,” B-Troop, 2nd Battalion of the 17th Cavalry, in Vietnam. Mel Gibson, on this poster, plays Lt. Col. Hal Moore in the new movie “We Were Soldiers,” which opened at the Regal Cinemas in Port Charlotte this week-end. Sun photo by Michael McLoone

Warrant Officer Mike Goff never saw “The Valley of Death.” He wasn’t one of the 400 soldiers of the 1st Battalion, 7th Cavalry Regiment, 1st Division surrounded and attacked by 2,000 North Vietnam soldiers at the La Drang Valley in mid-November 1965.

But Goff saw enough action as a helicopter pilot with B -Troop, 2nd Battalion, 17th Air Cavalry Regiment, 1st Division in ‘Nam in 1970-71. He was attached to the 101 Airborne Division. He went to see We Were Soldiers that opened at the Regal Cinema at Town Center Mall in Port Charlotte, Fla. The 53-year-old Punta Gorda, man attended the show with a bunch of local computer jockeys who also flew in Vietnam.

We Were Soldiers tells the story of Lt. Col. Hal Moore and his green troopers who were mauled by the enemy when they touched down at “Landing Zone X-Ray” in South Vietnam almost four decades ago in the first major battle of the war. The book, We were Soldiers Once and Young was written by Moore and Joe Galloway, a war correspondent who covered the conflict from ground zero. Galloway was in the middle of the fight. He shot it out with enemy soldiers while also doing his job as a reporter-photographer on the front lines.

“Of course, Hollywood has sanitized some of the war scenes. But, even so, it’s a fairly accurate description of the story.

“This first battle in Vietnam is legend among the Air Cav. It inspired a generation of Cav pilots. We all listened to the story, and it always ended with ‘Gary Owens.'”

It was Gary Owens that members of George Armstrong Custer’s horse cavalry sang as they rode out to fight Sitting Bull, the Sioux chief at the Battle of Little Big Horn in June 1876.

“Our mission was reconnaissance in the A Shau Valley. We were to find the NVA (North Vietnamese Army) and try and stop them and the flow of arms from coming down the Ho Chi Minh Trail that ran through the valley. When you went up to the valley in your helicopter you knew you were gonna get shot at every day,” Goff said.

The “Little Bird” he flew had a big stinger. It was armed with one or two mini-Gatling guns. They fired 5,000 rounds of 7.675 caliber ammunition a minute. In a single pass over the enemy these guns could put one round in ever square yard of a football field.

“We were young 21-year-old kids who made a game out of war. They gave me one of the flashiest airplanes in the world to fly. The only rule was to come back alive and bring everybody with you back alive, too.

“We’d see who could fly the most, who could shoot the most and who could blow up the most things,” he said. “We’d sit around at night (a group of chopper pilots) putting nails in empty mini-gun ammo cans packing them full of C-4 (plastic explosive). Then I’d take my ‘Little Bird’ and ease it over an enemy bunker, drop the can full of explosives with a lit fuse into the entrance way.”

During the 10 1/2 months his unit fought the war it lost 60 to 70 percent of its pilots in battle. The “Banshees,” as they were called, was an all volunteer outfit.

Goff was shot down three times during his Vietnam tour. For heroism he received two Distinguished Flying Crosses and the Bronze Star medal. He was also awarded the Meritorious Service Medal, the National Defense Service Medal and the Vietnam Campaign Medal.

“There were times when I’d get in a situation where my legs shook uncontrollably because I knew it was pretty hairy,” Goof said. “Like the first time I got shot down. We called times like these ‘bad air days.'”

Mike Goff, shown here with his OH-6A “Little Bird” observation helicopter with its mini-Gatling gun hanging out the side was only 20 in 1970 when this picture was taken in Vietnam. Photo provided

In early May 1970 he had one of those days. Goff and his unit were on a reconnaissance mission in the A Shau Valley looking for NVA.

“We inserted our ground troops on the wrong side of a raging river they couldn’t forge,” he said. ” So I dumped my gunner and observer off and started ferrying troops across the river five or six at a time.

“The NVA waited until I had half our troops across the river, so our forces were split, then they shot my tail rotor out. I was starting to lift off at the time. The normal procedure would have been to cut power and let the copter settle to the ground. But I had troops all around my bird so I couldn’t do that,” he said.

“Someone yelled, ‘Fire’ I thought my plane was on fire. So I rolled it over to put it in the river,” Goff said.

The tiny chopper spun out of control and landed in a heap at the top of a hill 500 to 600 yards away from the river. It rolled down the ridge and came to rest on top of an enemy bunker they had been searching for.

“When I climbed out of the helicopter, all my survival gear was gone. It had been slung out the door in the crash,” he said. “The only thing I had was a snub-nose .38 caliber revolver. “I hunkered down, because I knew our guys would come get me. All I had to do was stay alive until they showed up.”

Fifteen minutes later things on the ground started heating up as his people came looking for him.

“I could hear the fire fight all around me. I knew my guys were coming,” Goff said. “The fire fight went on for abut 15 minutes. It seemed like days. The enemy was in bunkers built into the hill were I crashed.

“I knew it was a bad day when a buddy showed up first with a machine gun in his hand and a big band of ammo slung over his arm as he came to get me,” he recalled. “Just before he got to me the darn gun jammed. Then both of us were sitting there trying to stay alive.”

“The NVA eventually turned tail and ran. We recovered their bodies. We also recovered intelligence information both on them and in their bunker. That was the purpose of our mission,” he said.

So what was Goff’s view of the Vietnam War?

“I was the son of a retired master sergeant in the Army. I had red, white and blue stuck all over me back then. But, I think we were doing the right thing,” he said. “Unfortunately, it turned into a political war.”

“War is not a tidy thing. Get it over as quick as you can. Don’t turn it into politics like we did in Vietnam.

Authority: By direction of he President of the United States under the provision of the Act of Congress approved 2 July 1926.

Reason: For heroism while participating in aerial fight evidenced by voluntary action above and beyond the call of duty in the Republic of Vietnam on 23 July 1970. Warrant Officer Goff distinguished himself while serving as pilot of an OH-6A light observation helicopter during operations near Fire Support Base Ripcord, Republic of Vietnam. While making a visual reconnaissance of an area north of the fire base, Warrant Officer Goff came under intense enemy fire. He immediately engaged the insurgents and marked their position with smoke for armed helicopters.

When the armed helicopters had completed their assault, Warrant Officer Goff returned to assess the damage. Coming under fire once more, he again marked the emplacement and called for the supporting determining helicopters.

Returning to the area after the second air attack, Warrant Officer Goff made low-level passes determining the damage. When he came under enemy rifle fire, he effectively engaged the enemy and successfully completed his mission. Warrant Officer Goff’s personal bravery and devotion to duty were in keeping with the highest traditions of the military service and reflect  great credit upon himself, his unit, and the United States Army.

AWARD OF THE DISTINGUISHED FLYING CROSS

Authority: By direction of the President of the United States under the provisions of the Act of Congress approved 2 July 1926.

Reason: For heroism while participating in aerial flight evidenced by voluntary action above and beyond the call of duty in the Republic of Vietnam. Chief Warrant Officer Goff distinguished himself on 10 February 1971 while serving as aircraft commander of a UH-1H lift helicopter during combat operations in the A Shau Valley, Republic of Vietnam. During a visual reconnaissance mission over an area of known enemy concentration, the lead aircraft sustained numerous hits form intense anti-aircraft fire and crashed. Upon initiating his approach to the crash site, Chief Warrant Officer Goff came under intense hostile fire and was forced to withdraw. Undaunted by the intense barrage, Chief Warrant Officer Goff made numerous low level passes over the area in search of survivors until he was forced to withdraw due to darkness and inclement weather.

This story first appeared in print in the Charlotte Sun newspaper, Port Charlotte, Fla. on Saturday, March 2, 2002 and is republished with permission.