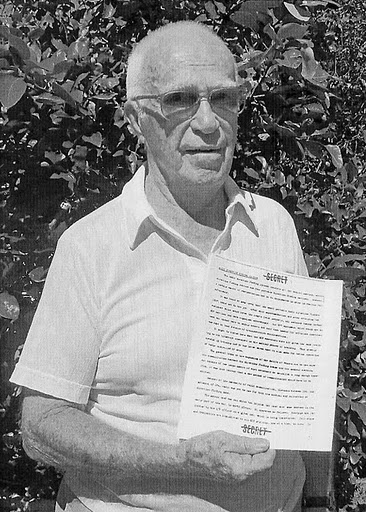 Ray Walker of Punta Gorda, Fla. holds a “SECRET” Army document from World War II. It shows that Gen. Dwight Eisenhower knew the Germans were about to launch the “Battle of the Bulge”, their biggest offensive on the Western Front. Sun photo by Don Moore

Gen. Dwight Eisenhower, supreme commander of Allied forces in Europe in World War II, knew a couple of weeks ahead of time the Germans were planning the huge offensive that became known as the “Battle of the Bulge,” according to Raymond Walker of Punta Gorda, Fla.

“I was the lieutenant commanding the direction-finding section of the 1st Army’s Radio Intelligence Company,” the 87-year-old Windmill Village resident said. “My primary job was to determine where enemy radio transmissions were coming from and what unit was sending them.”

In early December 1944, or possibly a little before that, Walker said, “We told Eisenhower’s headquarters the Germans were moving four or five Panzer units into the Black Forest and maintaining radio silence. We sent this message to Eisenhower over and over.

“Eisenhower and his headquarters knew what the Germans were doing, but they didn’t let the Germans know that they knew it. They let them come in, commit themselves and then they cut them off,” he said. “That’s exactly what happened. By doing what they did, Eisenhower shortened the war.”

He confirmed his suspicions in recent months when an old war buddy, who served in his same unit, wrote a book about his experiences during World War II.

“Joe Leonard Jr. of Gainesville, Texas, got in touch with me a couple of years ago and told me he was writing a book. We’ve been corresponding ever since over the internet about war details,” Walker said. “I got interested in the war all over again.

“About four months ago, another buddy of Joe’s, who was doing the same thing we were doing in Patton’s 3rd Army, was looking in the Army’s historical archives in Washington, D.C. for information on his unit. He came up with papers that had been marked ‘Secret’ that had to do with our unit. They said exactly what I’m telling you. Eisenhower knew about the Battle of the Bulge in advance,” he said. “Joe sent me a copy of this information.”

During that battle, that began on Dec. 16, 1944, the German’s launched the largest land offensive of the war on the Western Front. Their objective was to push their forces through the Ardennes Forest, cross the Meuse River, retake Antwerp, Belgium, and its harbor facilities and reach the North Sea — thereby splitting the Allied armies.

At 5:30 a.m. along a 135-kilometer front on the Siegfried Line, the Germans began their attack. They dubbed it “Wacht Am Rhein” — “Watch on the Rhine.”

German success during the Battle of the Bulge depended on three factors: The speed of the initial offensive, capture of Allied fuel supplies and the widening of the enemy’s offensive wedge piercing Allied lines.

By Dec. 22 the Germans offensive took St. Vith in the north and cut off and surrounded the U.S. 101st Airborne Division at Bastogne, in the south. It was here that the 101st commander, Gen. Anthony McAuliffe, confused the enemy and delayed its offensive by replying “Nuts” when asked to surrender his troops.

Two days later, the German offensive was blunted after trying to reach the Meuse River at Dinant, Belgium. It withdrew its Panzers after suffering heavy losses. The day after Christmas, Gen. George Patton’s 3rd Army broke through at Bastogne freeing the trapped and lightly armed 101st Airborne.

In the midst of it all was 1st Lt. Walker and his band of radio intelligence troops attached to Gen. Hodge’s 1st. Army.

“We were about 20 miles west of Malmedy. The Germans were coming right at us. We had to retreat back into Belgium because Eisenhower’s headquarters ordered us out. We had access to all the Allied codes and they didn’t want us to fall into German hands,” he said.

“At the Malmedy crossroads, the Germans slaughtered sixty-four American prisoners,” Walker recalled. “A German soldier guarding the Americans told a Panzer officer atop a tank they needed more guards. The officer replied, ‘I’ll take care of that.’ He mowed the American prisoners down with the machine gun on his tank.

“I was there when our troops were removing the bodies of the dead American POWs,” he said “All hell broke loose after that. It’s not nice to say, but there were no German prisoners taken for about 10 days after the slaughter of the Americans.”

It had been a long six months, Walker thought, since he came ashore 36 hours after the first wave went into Utah Beach in Normandy on D-Day, June 6, 1944. And his unit still had a long way to go.

He crossed the Rhine at the Remagen Bridge before it collapsed and began the final drive across Germany. During the last days of the war, in early May 1945, Walker knew what was coming.

“We were directly linked to G-2 (Military Intelligence) and we had access to much of their stuff,” he said. “We got advance information about Buchenwald Concentration Camp at Weimar, Germany,” a camp the men helped liberate.

The ovens at Buchenwald were the ultimate fate of tens of thousands of concentration camp prisoners in World War II. Photo provided

“I went into Buchenwald when the prisoners were still there. There were dead prisoners stacked all around the camp. I had a German camera and took pictures of the things I saw in the camp.

“After the Americans took over the camp and the little towns around the camp, they posted signs in front of the town halls saying: ‘You shall have 100 people here at 2 p.m.’ The American military government put the German civilians in G.I. trucks and transported them to Buchenwald.

The “hospital” at Buchenwald was really a place to die according to former Lt. Ray Walker. The white painted signs state the wooden beds had no mattresses for the patients. Photo provided

“I was right there when they were escorting them through the camp. If they did know what was going on, they were terrific actors because they broke down and cried when they saw all the dead in Buchenwald.”

When the war ended a few days later, Walker was in Ammersee, Germany, a summer resort on a lake south of Munich. He and his buddies were living in the lap of luxury.

Four of them, all young officers, had their own cottage on the lake complete with German maid service paid for with packs of American cigarettes.

“There were two German PT boats on the lake that a couple of guys from our company got running. They used the boats for water skiing.

Looking back on World War II all these many years later and the part he played in it, Walker said his experiences at Buchenwald were enough to take one’s breath away.

“I saw bodies of cattle, bodies of American soldiers, bodies of enemy soldiers throughout the war. You kinda get hardened to all the death and destruction. The dead along the way are like sacks of wheat. 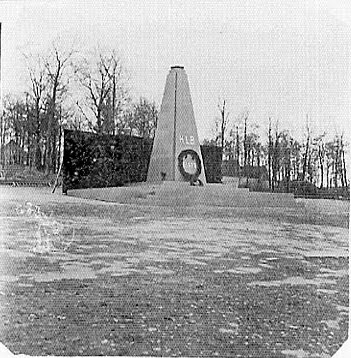 This is the memorial to thousands who died at Buchenwald. It was built by the prisoners who survived after the war. Photo provided

“But Buchenwald impressed and saddened me. You couldn’t believe that a man could be that inhumane to another person,” he said.

This story first appeared in print in the Charlotte Sun newspaper, Port Charlotte, Fla. on Monday, Dec. 16, 2002 and is republished with permission.