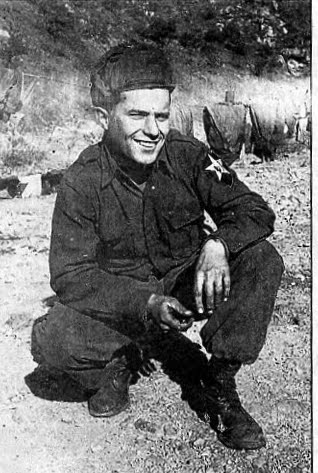 Larry Izzo of Oak Forrest subdivision in Englewood, Fla. was a 21-year old Browning Automatic Rifleman with the 2nd Infantry Division in Korea when this picture was taken in 1952. Photo provided

Larry Izzo of the Oak Forest subdivision in Englewood, Fla. was a 21-year-old corporal attached to the G-Company, 2nd Battalion, 9th Regiment, 2nd Infantry Division in Korea. He was a BAR (Browning Automatic Rifle) man.

When his unit arrived in Korea during the fall of 1952, the war was at a stalemate. It had evolved into trench warfare where both sides wasted hundreds of soldiers’ lives taking, losing and retaking a number of inconsequential hills from the enemy while a peace agreement was being negotiated in Panmunjom, Korea.

“We dug a 17-foot-deep trench line protected by artillery. At night, two dozen guys would go out on patrol to make sure no one was sneaking up on us,” recalled Izzo, now 78.

“One patrol I went out on one night in early December was quickly surrounded by a much larger enemy unit,” he said. “We sent up signal flares and reinforcements were sent out to rescue us.

“The enemy was throwing hand grenades and charging us in the dark. I would shoot at muzzle blasts 25 to 30 yards away. By the time (reinforcements) arrived, 45 minutes later, I had shot up all my ammo,” he said.

Izzo said several of those on patrol were wounded in the firefight with the North Koreans, but no one was killed. He escaped without a scratch.

He wasn’t as lucky when the enemy tried to take “Old Baldy,” another meaningless North Korean hill the 2nd Infantry was holding.

“It was an observation post our division used to spot advancing enemy forces. By that time, the hill had been taken and lost several times.

“The night before, enemy artillery riddled the bunker we had built atop the hill. Our battalion commander came through and ordered us to rebuild the badly damaged sandbag bunker,” Izzo said.

“We were out there putting in more sandbags when enemy artillery started coming in. The only thing I remember is being blown up in the air,” he said. “When I came down, I landed in our mine field. The reason I didn’t set off one of the mines is that there had been a snowstorm the night before, and snow covered the detonators.”

Injured and disoriented, Izzo crawled out of the mine field while a South Korean soldier who had been working with him bled to death beside him from his wounds. Izzo was taken to a M.A.S.H. unit, treated for a week, and put back on the front lines after a period of light duty.

“Luckily I was wearing a flak jacket and was only riddled with shrapnel in my arm, shoulder and face,” he recalled with a smile more than five decades later.

“On St. Patrick’s Day 1953, we were holding a hill called ‘Little Gibraltar.’ We were in the midst of being relieved by another unit when the enemy attacked and all hell broke lose,” he said.

“The attack started with an enemy artillery barrage. Then they attacked the hill during daylight, which was unusual. The enemy got into our trench line before we stopped them two days later with white phosphorus grenades and flame throwers,” Izzo said.

He did a repeat performance at “Pork Chop Hill.” 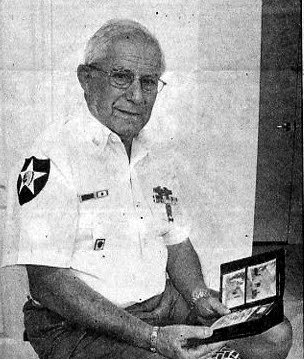 Izzo looks at a small photo album of pictures showing him as a young infantryman who served a tour in Korea fighting on “Pork Chop Hill” and “Old Baldy”. Sun photo by Don Moore

“We held the ridge and the North Koreans were trying to take it from us. We stopped them.”

By the time Izzo completed his tour of duty in Korea and three additional months service at Fort Lee, Va., he had received the Purple Heart, Combat Infantryman’s Badge, Presidential Unit Citation for his division, and two battle stars for fighting at “Old Baldy” and “Pork Chop Hill.”

He and his wife, Joann, came to Englewood and have lived in Oak Forest for three years.

This story was first published in the Charlotte Sun newspaper, Port Charlotte, Florida on Thursday, June 11, 2009 and is republished with permission.