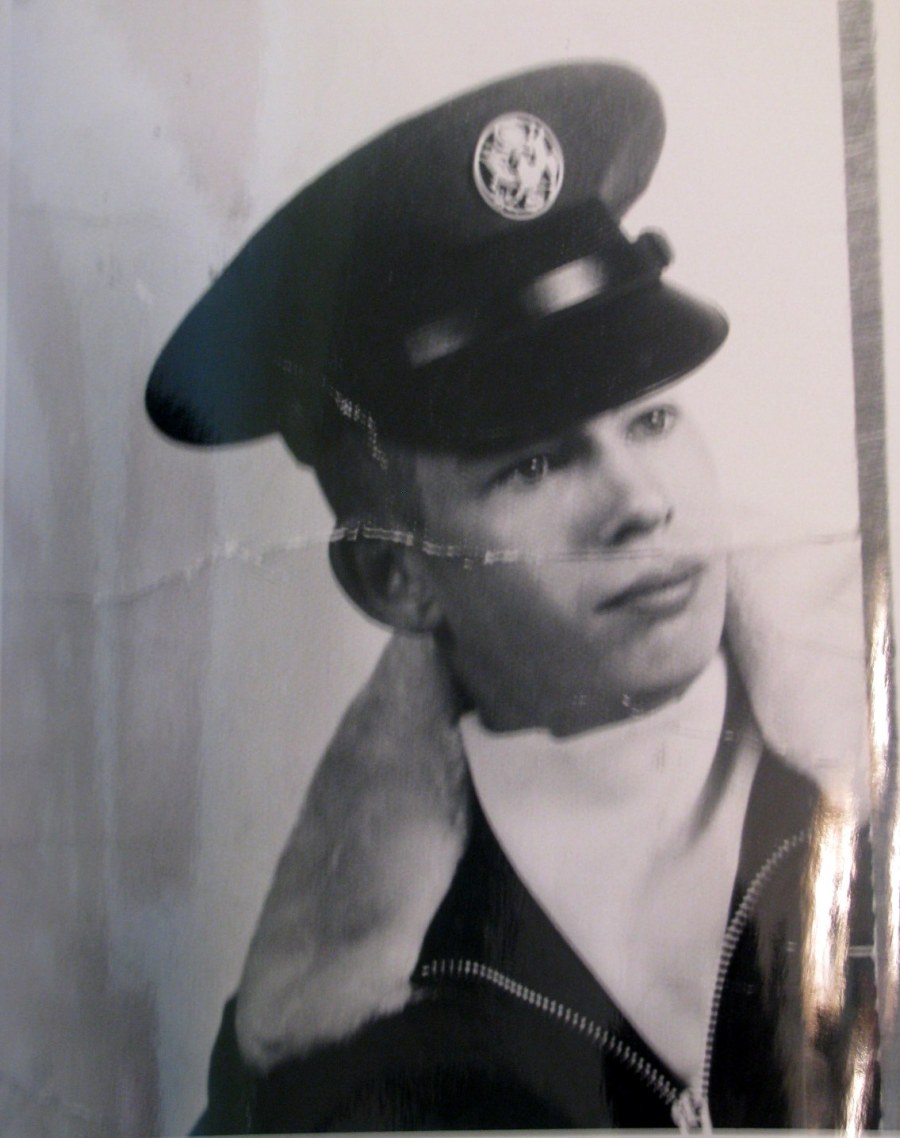 Young recruit: This was Jerry Steimle of Port Charlotte when he joined the Air Force at 18 in 1967. He served 25 years in the service, much of it as a crew chief in the Air National Guard. Photo provided

Young recruit: This was Jerry Steimle of Port Charlotte, Fla. when he joined the Air Force at 18 in 1967. He served 25 years in the service, much of it as a crew chief in the Air National Guard. Photo provided

Former Staff Sgt. Jerry Steimle of Port Charlotte, Fla. was a crew chief on an Air Force transport plane, refueling plane and helicopter who has been involved in many of the United States of America’s civilian and military adventures during the past forty years.

The 61-year-old Charlotte County resident joined the Air Force in 1967 as an 18-year-old recruit. He spent one four-year hitch, got out of the service and 17 years later signed up for the Air National Guard at 39. He served another 21 years flying around the country and around the world on missions in the Guard for his country.

His adventures began with:

Apollo-7 Mission in 1968 during his second year in the Air Force.
Operation Desert Shield, 1991, Iraq invasion, President George H.W. Bush.
Operation Restore Hope in 1992 in Somalia to bring food to the people there.
Operation No-Fly Zone in 1994 in Iraq to ground Saddam Hussein’s planes.
Brush fires in the Dayton area in 1998 the guard assisted with.
9-11 Attack on World Trade Center in New York City in 2001.
Operation Iraqi Freedom in 2004, President George W. Bush’s invasion.

In 1968 he served in the Air Force as a crew chief aboard a C-130 transport plane in the 55th Aero Space Recovery Squadron of the Military Airlift Command out of Kindley Air Base, Bermuda. Their plane was involved in the Apollo-7 Mission, the first mission where three astronauts, Walter Schirra, Donn Eisele and Walter Cunningham, were sent into space for 11 days.

“We were suppose to capture a film capsule in the air of the astronauts floating back to earth in their capsule and rush it to Patrick Air Force Base at Cape Canaveral, Fla. but it didn’t happen,” Steimle said. “So we became the first Air Force C-130 crew to land on the carrier USS Enterprise.

“Our guys had never landed a C-130 on the deck of a carrier, they were Air Force people. But our pilot was ordered by the admiral in charge of the mission to land on the carrier’s deck,” he said.

“It didn’t help things when the captain flying our plane told us, ‘I think I can do it.’ I wanted him to say, ‘I know I can do it,’” the ex-crew chief said. “The pilot’s nickname was ‘Crash!’

“He did an excellent job setting the plane down on the carrier’s deck. We grabbed the film and took off without any trouble for the Cape with the goods,” Steimle said.

“The mission I’m most proud of involved bringing water and troops to the New Orleans area after Hurricane Katrina in 2005,” he said. “I felt like I was doing something special by helping the people of New Orleans.”

By then Steimle had switched guard units and was flying crew chief in a KC-135 tanker jet as part of the 157th Air Refueling Unit out of Portsmouth N.H. This is a military version of the Boeing 707 airliner. They could carry 200,000 pounds of fuel on each flight.

“We made a number of trips to New Orleans bringing water and soldiers into the airport there. I received a Humanitarian Medal for this service,” he proudly explained.

For several years he was involved in military flights in the Middle East providing fuel for fighters and bombers taking part in the fighting in Iraq and Afghanistan.

“We began in 1990 flying out of Peace Air National Guard Base at Portsmouth. We refueled anything that came our way that was on its way to the Middle East as part of President Bush’s ‘Operation Desert Shield,’” he said.

“Once the war started we went over there and flew refueling missions in Operation Desert Storm,” Steimle added. “We were flying out of Jeddah in Saudi Arabia.”

In 1998 he got out of the guard. By then he and his wife, Anne, moved to Port Charlotte in 1996. He joined the Army National Guard in Arcadia after moving down here, but a year later he decided to rejoin his old outfit, the 157th Air Refueling Unit. This meant he had to fly up there once a month to the meeting on his own nickel.

“In 2002, after 9-11, we flew missions over New York City refueling planes protecting our air space. It was reassuring flying next to a fighter jet armed with bombs and rockets,” he said.

“When ‘Operation Iraqi Freedom’ broke out in 2003 under President George W. Bush our guard unit was activated. We were based in Quitar, a little country next to Saudi Arabia.

“My unit in New Hampshire has been activated ever since the first Gulf War in 2001. People in this unit have been serving over there for years. I volunteered for trips to the Persian Gulf area in 2001 and 2003,” Steimle said.

In June 2008, he retired after serving 25 years in the military.

Looking back on his years in the service, Steimle said, “The Guard was great because you worked with the same people all the time. We always went somewhere as a group. We flew around the world in a plane together.

“It was the guard that provides 51 percent of the refueling missions in the whole Air Force. Guard members often had much better job qualifications than the airman serving in the regular Air Force.

When Steimle called it quits two years ago he received several awards from his guard unit that he prizes. 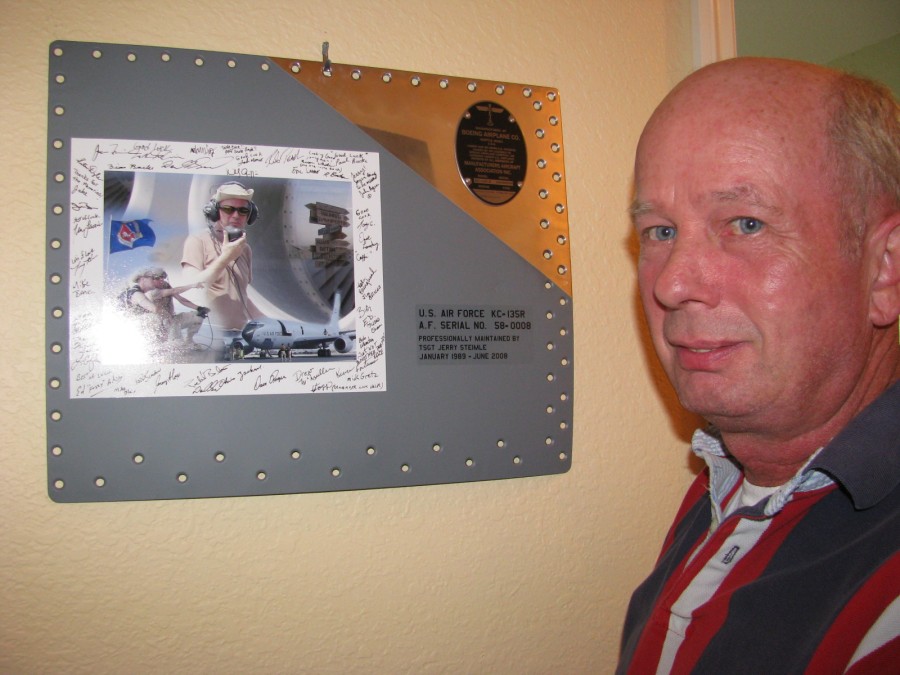 Jerry Steimle looks at a plaque he was given by the members of his unit, the 157th Refueling Unit base at Peace National Guard Air Base in Portsmouth, N.H., when he retired. It’s made from the tail section of the KC-135 tanker he flew in for years. Sun photo by Don Moore

One is a plaque made from a tail section of his KC-135. It notes that the plaque, signed by everybody in his unit, was the tail section from KC-58-008. A small oval shield on the plaque reads: “Boeing Airplane Co., Seattle, Washington, USA.”

The second award is a silhouette of a Boeing KC-135 cut out of aluminum from a piece of his plane mounted on a round stand. It was given to him by the maintenance department of his air unit stationed at Pease National Guard Air Force Base in Portsmouth, N.H.

This story first appeared in the Charlotte Sun newspaper, Port Charlotte, Fla. on Monday, March 15, 2010. It is republished with permission.