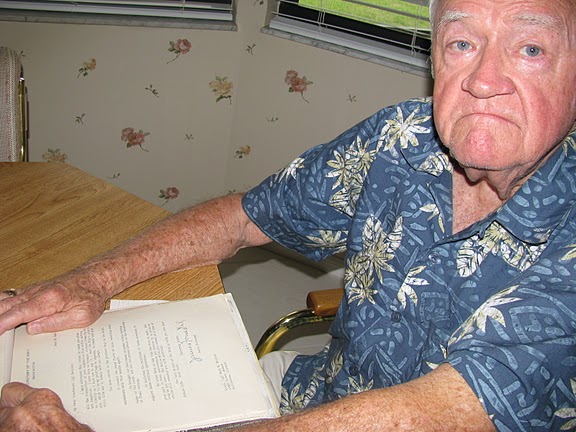 Earl Swillum of Port Charlotte, Fla. holds a letter he received from the Secretary of the Navy James Forrestal thanking him for his service in World War II. Sun photo by Don Moore

Earl Swillum went aboard an LST as a “90-Day Wonder” third officer and sailed into the war zone at the Battle for Saipan. Before the fighting in the Pacific was over he and the LSTH-121, which also served as a hospital ship, took part in three other major battles during World War II.

“Every battle was bad, but the worst was probably Iwo Jima,” said the 90-year-old former Naval officer. “I was the officer of the deck that first day of the battle and our LST (Landing Ship Tank) was 1,500 yards off the beach.

“There were maybe 25 other LSTs off the beach at Iwo like us, sending their Marines ashore in landing craft. We had 16 DUWKs (amphibious vehicles) aboard our LST that carried 40 Marines to the beach.

“At night we had these big 24-inch search lights trained on Mount Suribachi. The big ships were pumping lead into that hill from offshore,” Swillum recalled. “You could see the tracers and big shells hitting the hill. The firing went on for days.

“When the Marines hit the beach, they were not happy. They were having trouble walking in the island’s black volcanic sand. What was worse, their tracked vehicles weren’t able to move in the sand,” he said.

“The black sand would cut your feet if you tried to walk on it. What was worse, the Japanese were up on Suribachi lobbing their mortars down on the Marines who were dug in on the beach.

Swillum remembers a trip to the beach he made in a Higgins boat (landing craft).

“We had to take some stuff into the beach. I got in one of the landing craft with a coxswain and a seaman and headed for shore,” he said. “I tell you that was no place to be. Enemy bullets and shrapnel were zinging right toward us on the way in.

“Four days after we sent Marines ashore, the first flag went up on Suribachi. We’d gotten word that the Marines were going to put a flag up on the hill. I got the binoculars out and watched as the American flag went up about 10:30 a.m. The bells and whistles of the ships all around me started sounding once our flag flew atop Suribachi.”

What the Marines didn’t realize at that point was there would still be more than a month of deadly fighting left on Iwo Jima before the Leathernecks could call the 8-square-mile island theirs. By then, 22,000 Japanese would die for the emperor; 6,800 American servicemen also would be killed and another 12,000 more wounded taking the volcanic atoll.

Even before Swillum and the LSTH-121 participated in the invasion of Saipan, his ship and its crew barely escaped tragedy at West Loch back at Pearl Harbor. On May 21, 1944, at mid-afternoon, dozens of LSTs were rafting together as they were being loaded with fuel and ammunition for the upcoming battle.

A welder working on one of the vessels was blamed for accidentally igniting some aviation gasoline that caused the explosion that killed 163 sailors and injured scores more. Several LSTs sank at their moorings and others were damaged.

“We were loading supplies for the pending invasion when everything blew up at West Loch,” Swillum said. “When the first explosion occurred, we cut our moorings and went to flank speed — 10 knots — escaping the burning water in the loch.

“There must have been half a dozen explosions. Fire covered the water in the loch. One of our officers was in a small boat and pulled three seamen to safety out of the fiery water. He received a citation for his efforts,” the old sailor said.

“Saipan was tough. We were under attack from Japanese planes all the time. Enemy bombs hit the water on both sides of our LST and exploded,” Swillum said. “A Japanese Zero fighter strafed us. I could see the pilot staring at me a few feet away as he flew over.”

Their LSTH had the usual complement of 20 mm and 40 mm anti-aircraft guns. But they also got a hold of a quad, 90 mm gun they strapped down to the deck that provided a considerable amount of additional firepower against attacking Japanese planes.

It was more of the same at Tinian and Peleliu. Tinian was another island in the Mariana chain. The battle started July 24 and ended Aug. 12, 1944. By then, 8,000 Japanese had been killed and 328 captured. American losses on Tinian totaled 328 killed and 1,571 wounded.

Peleliu was of importance to American forces because it had two airstrips built by the Japanese the Allies wanted to use. The battle began Sept. 15 and concluded Nov. 27, 1944. When the shooting stopped, 10,695 Japanese had been killed and 202 captured. American losses on Peleliu were 1,252 killed and 5,274 wounded.

When Swillum and his LSTH were headed to Okinawa, after the biggest battle in the Pacific was over, they received word the Japanese had agreed to surrender unconditionally.

“We reached Okinawa just about the time the war was over,” he said. “We sailed into Buckner Bay, dropped anchor and waited.

It was at this point Swillum came as close to death during two typhoons the LSTH sailed through off Okinawa as he had at any time during the war.

“The first typhoon we ran into was in the China Sea. The second one was even worse. We ran into it about 125 miles due east of Okinawa. The wind was in excess of 125 mph,” he said.

“We were dealing with 50-foot seas. We had to keep the wind one to two points off the bow in order to stay afloat. If we didn’t, we’d flip over and break up,” he explained. “Every four minutes we’d slap down after cresting a 50-foot wave. It went on like this for three days.”

An LST is a 328-foot, flat-bottom supply boat designed to transport 16 Sherman tanks or 16 landing craft to the beach. It can also transport 125 Marines and their equipment. It’s not the steadiest craft in high seas. It was crewed by 10 officers and 120 enlisted men.

After the war, Swillum worked for Ford Motor Co. for 33 years. He then worked for John Hancock Insurance Co., retiring as a vice president.

Swillum and his wife Sally moved to Port Charlotte in 1989. They have six children.

Lt. Earl Swillum of Port Charlotte, who saw action as an officer aboard an LST (Landing Ship Tank) fought in four major battles in the Pacific during World War II received a letter from Secretary of the Navy James Forrestal. It appears below:

I have addressed this letter to reach you after all the formalities of your separation from active service.

You served in the greatest Navy in the world. It crushed two enemy fleets at once, received their surrenders only four months apart. It brought our land-based air power within bombing range of the enemy. It set our ground armies on the beach heads of final victory. It performed a platoon of tasks necessary to support these military operations.

No other Navy at any other time has done so much. For your part in these achievements you deserve to be proud as long as you live. The nation you served at the time of this crisis will remember you with gratitude.

Best wishes of the Navy go with you into your future life.

This story was first published in the Charlotte Sun newspaper, Port Charlotte, Fla. on Thursday, April 22, 2010 and is republished with permission.

Click here to view Swillum’s Collection in the Library of Congress.