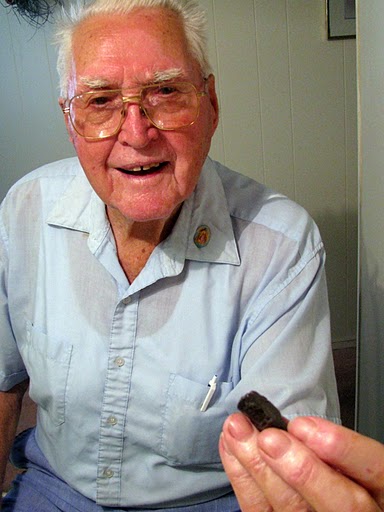 Mark Vanderveer of Holiday Park in Englewood, Fla. holds a piece of German shrapnel surgeons took out of his back after he was injured in the Battle of the Hürtgen Forrest during World War II. Sun photo by Don Moore

Mark Vanderveer only fought in one major battle during World War II, but it was a doosie. He served as a PFC in E-Company, 26th Infantry Regiment, 1st Division of the 1st Army during the Battle of the Hürtgen Forest fought along the Belgium-German border.

American and German forces clashed in a 50 square mile heavily forested area immediately below Aachen, Germany. It began in mid-September and lasted until mid-December 1944. By the time it was over 24,000 U.S. soldiers had been killed, wounded or were missing in action. An addition 9,000 American soldiers succumbed to trench foot and other maladies.

Vanderveer lasted about two months in the dense, dark forest before he and a bunch of other members of his company were killed or wounded by shrapnel from German 88 artillery shells.

“A German 88 shell hit a tree and threw shrapnel in all directions wounding or killing a bunch of us,” the 92-  year-old Holiday Estates resident, who now lives in Englewood,said. “The enemy shell hit about 9 a.m. and got most of the guys in our company. 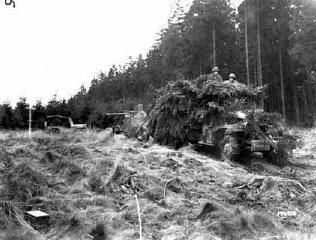 An American anti-aircraft gun, towed by a truck camouflaged with foliage, moves into position in the Hürtgen Forest to provide fire support against ground targets. November 6, 1944. U.S. Army Signal Corps photograph taken by C A Corrado.

“A lot of people were hollering for help. Help didn’t arrive until 6 p.m.,” he said. ” Two American tanks that had their turrets pulled off and replaced with platforms for stretchers finally showed up. It took them a couple of hours to get us back to a field hospital behind the front lines.

“I got hit in the back by shrapnel. More shrapnel shattered the bones in my right arm and shoulder. Eventually I was transferred from that field hospital to a much larger regular hospital in Belgium,” Vanderveer explained. “I spent three months in Belgium recuperating from my injuries and operations.

“On Christmas two  planes flew in to transport us back to England and another hospital. As we were being loaded onto the transports we were attacked by a couple of German fighter planes. They sprayed the area with machine gun bullets, but miraculously we weren’t hit.

I was flown to the 106th General Hospital north of London. I spent time in three or four other hospitals in the area before I was shipped home to the States,” Vanderveer said. “It wasn’t until I got home to McClosky General Hospital in Temple, Texas that my arm and shoulder began improving. They had some kind of electric machine that rejuvenated my right arm and shoulder.”

After being discharged from the Army on Sept. 1, 1945 he went back in the trucking business he had left when he was drafted a year or so earlier. Eventually Vanderveer opened a furniture store in Killman, Mich. that he operated for 38 years until he had his wife, Hazel, retired to Florida a few years ago.

The couple had two daughters: Sylvia and Marsha. Sylvia died recently, but Marsha and her family live in North Port, a few miles away.

This story first appeared in the Charlotte Sun newspaper, Port Charlotte, Fla. on Monday, April 11, 2011. It is republished to the web with permission.