Tom Gould was 17 years old and fresh out of Great Lakes’ boot camp in 1963 when this picture was taken. He became a Navy medic in Vietnam at start of the war. Photo provided

Looking back on it all, Tom Gould of Venice says, “I was 17 and just out of high school. I was a rebel without a cause. My father told me I had three choices: ‘I could get a job, go in the service or go to reform school.’

“I went in the Navy, ended up in Great Lakes for boot camp, after graduation went on to San Diego for corpsmen training. Right after that I was transferred to Camp Pendleton, Calif. and the Naval hospital there.

“I was on a surgical ward and did a little of everything: paperwork and giving IVs. The most dramatic thing that happened to me there, I helped treat three helicopter crewmen who were badly burned in a crash.

“Shortly after returning from Christmas leave in 1964 about 80 of us went over to Vietnam from the hospital at Camp Pendleton. In 1965 there were a few Marines over there training Vietnamese soldiers and getting in firefights.

“After I arrived in country I was taking care of the KIAs (Killed In Action). I was getting the dead Marines prepared to be sent back to the States. It was not fun. I don’t talk about it because it brings back memories I’m not too pleased about,” Gould said.

He was with the 1st Medical Battalion, 1st Marine Division, Fleet Marine Force in Vietnam local at Chu Lai. After working behind the lines in a MASH type hospital facility, Gould decided it was time to check out the front lines.

“I put in a request to transfer to the front lines. Two weeks later I was transferred to the 3rd Battalion, 7th Marine Regiment, 1st Marine Division in the Binh Son District of Vietnam,” he recalled.

“It was April 1, 1965, April Fools Day, and I was joking with a good buddy from back home about it when a firefight broke out with the VC (Vietcong). We were in the rice paddies and I got hit in the leg with a sniper’s bullet,” Gould said.

“They called another corpsman up to work on me and a couple of other guys who were wounded, too. I was bleeding pretty badly at the time where I was hit in the left knee,” Gould said.

“There was a machine-gunner right in front of me. He opened up on the VC. He just sat there taking fire and giving it back. He burned the barrel of his gun out and had to get another barrel to keep firing.

“A Medevac helicopter was brought in to get me and a couple of other guys who were wounded in the firefight. Smoke was also called in to shield us from enemy fire, but it didn’t go off. So they called in a couple of jets that dropped ‘Willy Peter’ (White Phosphorus),” Gould said.

“I went back to the medical battalion where I originally came from for treatment. The guys there gave me a hard time because they said I had the million dollar wound and was going home. They sent my records on ahead and they got lost.

“I went from Chu Lai to Da Nang. I had no records so they kept me in Da Nang for a while. After a couple of weeks I was shipped back to my outfit. My wound broke open and I ended up on the USS Repose, a hospital ship, where they treated me again. I spent a month on the ship recovering,” he said.

“When I returned to Vietnam I was put in Civilian Affairs and sent to the Binh Son District working as a doctor and nurse combination treating civilians with all kinds of medical problems.

“We were in the middle of nowhere being protected by a squad of five or six Marines. We were living in a brick building with a tin roof. The VC were bouncing mortars off the roof,” Gould said. “We were sitting out atop a bunker one time having a smoke when a tracer bullet came right between us. We decided to get down from there because it was getting a little too hairy.

“While I was there a VC unit moved into our area. We knew if they attacked us we weren’t gonna make it. Right beside us was a South Korean Tiger outfit with 105s and 155s (artillery). The VC decided not to attack that night because of all the artillery.

“The next night they attacked my old company and overran it. They did a lot of damage,” Gould said. “We were about a mile away watching the VC attack”

After that his unit was sent to the Demilitarized Zone along the 17th Parallel dividing North and South Vietnam. He was still working in Civilian Affairs and wasn’t suppose to be up there, but that’s where Gould ended up.

“We put up large general purpose tens atop a hill near the DMZ. Immediately the enemy used the tents as a target and we caught incoming fire,” he said. “Puff the Magic Dragon (a transport plane with Gatling guns) was called in to subdue the enemy.”

Two week later they were out of there headed for Da Nang. When Gould arrived he had one last day to serve in Vietnam before going home.

“We went back to LA and they told us there to wear civilian clothes. The civilians, they said, weren’t too pleased with what was going on in Vietnam. We were told to stay away from them” he recalled.

A short while later Gould ended up in a VA hospital recovering from what he found out years later was PTSD (Post Traumatic Stress Disorder).

“Psychologically I wasn’t in the best of shape. And all the demonstrations against the Vietnam War that were going on in this country at the time wasn’t helping me,” he said.

Eventually Gould went to work for the post office. He and his wife, Elizabeth, came to Florida in 1983. He spent the next dozen years working for the Venice post office before retiring in 1995. 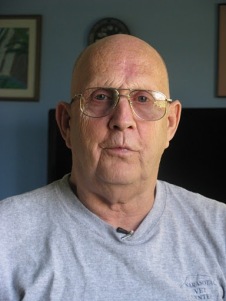 This story was first printed in the Charlotte Sun newspaper, Port Charlotte, Florida on Thursday, March 17, 2011. It is republished with permission.