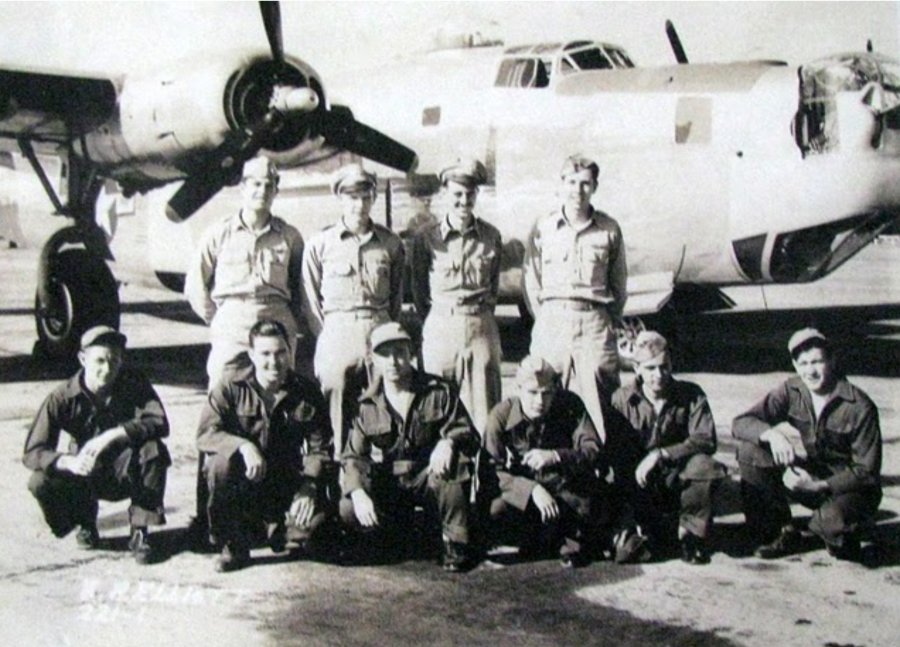 This is 2nd Lt. Victor Barber's B-24 crew that first formed in Lincoln, N.B. where this picture was taken before flying to Europe and becoming part of a heavy bomber squadron in the 15th Air Force during World War II. Barber is standing in the rear at the far left. Photo provided.

Disaster struck on Friday, October 13, 1944 for 2nd Lt. Victor Barber a 21-year-old bombardier aboard a B-24 “Liberator” four-engine bomber flying from a base in Foggia, Italy. He was a member of the 251st Bomb Group, 724th Squadron, 15th Air Force.

“We went to briefing before our sixth mission at 4:30 a.m. One of the things that stands out in my mind during the course of the briefing, we were told the Germans had moved 700 flak guns around Vienna, Austria, our target,” the 87-year-old former crewman who lives in La Casa mobile home park in North Port, Fla.  explained. “That meant there could be as many as 7,000, 88-shells a minute headed our way. We didn’t say a thing to each other as we headed out to our planes because we knew probably half of us would not be coming back.”

Their target: a Fiat factory along the Danube River near Vienna. Their bomb wing of 28 heavy B-24s was sent on this mission to flatten the plant. Four of them in his wing, including Barber’s plane, didn’t return to base.

“We were escorted as far as the Alps by P-51 Mustang (fighters) that had to turn back for lack of fuel. As we approached our target we flew north of Vienna and then turned south to make the bomb run,” Barber recalled. “Fifteen minutes from our target all we could see ahead of us were black puffs of smoke from the German 88 ack-ack guns we had to fly through.

“We dropped our bombs on the Fiat factory about the same time an 88 shell hit our Number-3 engine and knocked it out. Another 88 shell went through our wing and exploded above the plane causing a second engine to catch fire,” he said. “Our plane was losing altitude. We had to turn away from the formation and hope enemy fighters didn’t catch us.” 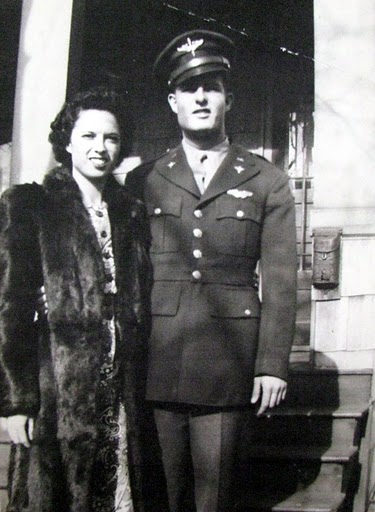 Mary and Victor, a couple of young married people, are pictured in this 1943 photo. It was before he shipped overseas as a bombardier aboard a B-24 “Liberator” bomber flying with the 15th Air Force out of Italy. Photo provided

By the time they reached the Alps on their trip home, the pilot told the crew they would have to bail out because their bomber couldn’t make it over the mountains.

“I grabbed my small chest parachute I had carried with me for months. I slept on it, sat on it and kicked it around. I thought to myself, ‘I hope the guy that packed it knew what he was doing,'” Barber recalled a lifetime later. “When the alarm was sounded I opened the nose wheel door and jumped.

“Before I knew it, here came the trees. I hit a tree and was knocked out for a few seconds. When I came to I was hanging in my parachute from a branch 50 feet off the ground. The branch broke and I fell to the ground,” he said.

“When I woke up I was surrounded by Hungarian troops that were fighting for the Germans,” Barber said. “I couldn’t walk without assistance because I had injured my ankle. I wound up in a little jail with a couple of cells that could have been right out of the old west.

On Dec. 1, 1944 his mother, Beatrice Barber, received a Telegram she had been dreading that read: “A report just received through International Red Cross states your son, 2nd Lt.Victor Barber, is a prisoner of war of the German government. Other information follows from Provost Marshal General.”

“A couple of weeks later I found myself in solitary confinement in a state prison in Budapest, Hungary. I was being interrogated by a Luftwaffe officer who spoke perfect Oxford English,” Barber recalled. “Eventually I was put on a train with a bunch of other POWs and sent to Stalag Luft #3 near Sagan, Germany. It was a camp for American, British and French Air Force officers located about 70 miles southeast of Berlin.”

In March of 1944, a few months before Barber arrived, 50 officers escaped from the camp, but were rounded up. The Germans executed all of them. 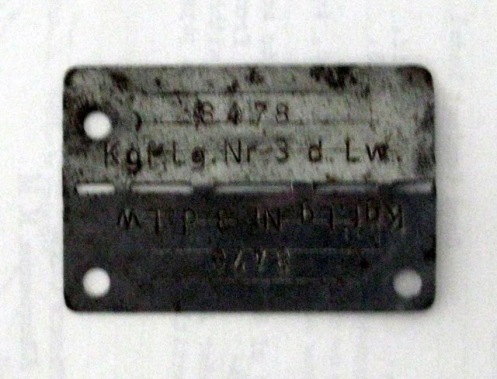 This is the German metal identification tag POW Victor Barber had to keep with him at all times when he was a prisoner in Stalag Luft #3 after his bomber was shot down near Vienna, Austria during World War II. Sun photo by Don Moore

“We were warned that any officer who attempted to escape would be shot. By the time I reached Luft #3 I had dropped from 190 pounds to 135 pounds. In the camp with me were 7,000 to 8,000 American, British and French officers,” he said.

Earlier in the war this German POW camp not only had a library, but it also had a theater production group and all kinds of things for prisoners to do. By the time Barber arrived their captors were running out of everything. “During the first week in January 1945 at night we could see flashes of cannon fire toward the east. The Russians were advancing on Berlin,” he said. “On Jan. 27, 1945 they came in and said all the POWs were to march south. The weather was 10 above zero and those prisoners who couldn’t keep up were left behind and froze to death.”

After three days and nights of non-stop marching the POWs of Stalag Luft #3 reached a small town that had a pottery factory and a kiln that kept them warm for one night. They all collapsed and slept until the next morning in the warmth of the furnace.

“We were put into box cars and shipped to Moosburg, Germany where there was a huge prisoner of war camp with upwards of 125,000 Allied POWs in it. It was called Stalag Luft #7A and we stayed there from Feb. 1 until April when we were liberated,” Barber said.

“Hitler had given orders to kill all the POWs which didn’t make any of us too happy. The Wermach, the German infantry soldiers, who guarded the camp kept the Storm Troopers from coming in the camp and killing all of us,” he recalled 65 years later.

“It was April 29 and we could hear cannon fire in the distance. Bullets started flying back and forth inside the camp. We all hid until the shooting stopped and then we looked out. There were American tanks rolling into the camp,” Barber said. Sitting under the gun of the first tank was Gen. George Patton, (commander of the American 3rd. Army). He was wearing his pearl-handled revolvers. He was a welcome sight.”

By this time Barber’s physical condition had improved. He wasn’t any fatter, but he could walk and his ankle wasn’t hurting him any more.

“We were flown from Straubing, Germany to Le Harve, France in C-47 transport planes. We lived in tents at Le Harve until we were packed aboard the former ocean liner SS John Ericson and sailed home to New York City,” Barber said.

An official Telegram to Beatrice Barber, his mother, said it all: “The Chief of Staff of the Army wants me to inform you that your son, 2nd. Lt. Victor Barber, has arrived in the United States.”

Like millions of other home coming service men and women, Barber took advantage of the G.I. Bill and obtained a degree in accounting. For 35 years he was a practicing CPA in Peoria until he retired and moved to Florida in 1988.

This story was first published in the Charlotte Sun newspaper, Port Charlotte, Florida on Monday, October 25, 2010 and is republished with permission.