Diane Oldmixon, on the right, and her cousin, Louis Tuzeau, sit on the window of her grandparents’ home in Bonelle, France, south of Paris during World War II. At 12-year-old she and her girlfriend helped the French Underground. Photo provided.

When Diane Oldmixon of Rolls Landing in Charlotte Harbor, Fla.was 12 she and her girlfriend helped the French Underground fight the Germans who invaded their country during World War II.

It all started innocently enough. Diane visited Odile, one of her best friends, at her parent’s farm near the village of Bonnelle, 20 miles south of Paris.

“Odile’s parents were supplying the local French Underground with food. A lot of the men in the area, who were in the Underground, would come to her farm for food,” she said. “Many of them were hiding in a nearby woods.

Occasionally, we’d take them food on our bicycles. Odile and I would fill up a couple of wooden baskets with bread and cheese and put them in our bike baskets and take it to them maybe once a week.

“My grandparents, who I was staying with at the time, didn’t know I was helping the Underground. Odile’s parents were working with the Underground and we wanted to get involved, too,” she said 65-years later.

Although it could have been a dangerous occupation if they had been caught by the Germans delivering food to the Underground, they were lucky. Diane said there were few Germans in the little farm village where they lived. That’s why members of the Underground picked the nearby woods as a hideout.

“Living under German occupation wasn’t too bad,” Diane recalled. “We had four German soldiers living in the downstairs of our two story house while we lived on the second floor.

“They were very polite and very gentlemanly. I didn’t have one complaint about them,” she said. “We had a beautiful cherry tree in our yard and the German soldiers wanted to pick the cherries. They asked permission and gave us a nice loaf of bread,” she said.

The only problem Diane had with German soldiers involved SS troops.

“The SS were a bunch of brainwashed soldiers who strutted around with death head insignias on their caps and lightening bolts on their collars,” Diane said. “They were trouble.” 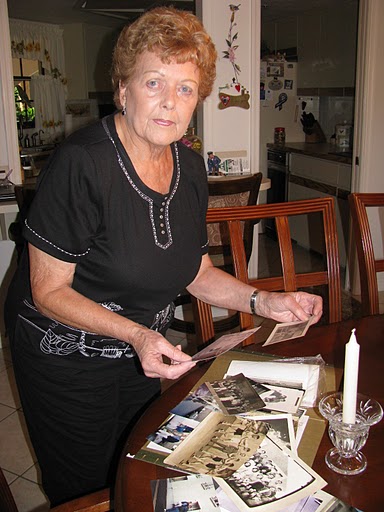 Diane Oldmixon, who lives in Rolls Landing condominiums in Charlotte Harbor, Fla. looks for pictures of her childhood in France during the Second World War. Sun photo by Don Moore

The most amazing story she told about the German military during the war happened when she was on her bicycle headed for high school in a town about five miles away.

“A German soldier on a motorcycle stopped me and pulled me over to let a German motorcade go by. Until he went by I didn’t realize it was Hitler’s motorcade,” She said. “He was being chauffeured in an open Mercedes limousine on his way to Paris. As he passed by he waved to me. I was the only one along the road at that point. I was scared to death. I’ll never forget it.”

The closest Diane came to the Germans’ finding out she had been helping the Underground came when she found the body of an Underground member near her friend’s farm.

“I was walking my German shepherd dog near the farm one morning when I found a dead Underground member alongside the road in the bushes. His whole chest had been blown away by a hand grenade,” she said. “I immediately notified the farm and they came and got the body. They laid the remains of the dead man on the dining room table in the farm house.

“What I remember most about the incident was that while I was standing in the dining room looking at the body, blood was leaking through the gaps in the table’s slats onto the floor. That picture always stayed with me,” Dianne said. “I don’t know what they did with the body.”

“We had a huge picture of Hitler in our classroom during the occupation. We had to give the Hitler salute. when entering the classroom,” she said. “We threw spitballs at the picture several times until we were told our teacher would be in big trouble if it happened again.”

Diane and her friends knew they were on the verge of being liberated when American tanks appeared on the main road through town one morning. The Germans were on the other end of the same road on their way out of town.

“Apparently both sides came to an understanding that there would be no fighting in Bonnelle. What I remember most about that day was that some of the American tankers were black. I had never seen a black person before,” she said.

When V-E Day arrived 10 months later all Diane could think about was going home to America and seeing her mother once more.

Her father and mother moved to America from France before the war and obtained American citizenship. While the family lived in New York she was born. They divorced and her mother took her back to France to live with her grandmother. Shortly after that the war broke out.

“I was 15 and happy that I could move to America and live with my mother. I sailed out of Marseilles some time in February 1946 for New York City aboard an old ocean liner called the Gritsoln filled with a bunch of people – we were seasick,” she recalled with a smile.

“I was just learning English and I didn’t want to have a French accent. I would have the radio on and repeat the words exactly the way they said them on the radio. However, because of my French accent I got my first job at 17 at Penn Station in New York selling Italian candy in a little store in the station. They liked my French accent,” Diane said.

She married several years later. She was divorced after 24 years and then married her second husband sometime later. He was a harbor captain who worked from a base on Staten Island, N.Y. When he retired they moved to Punta Gorda Isles, Fla. and later, after his death, Diane relocated to Rolls Landing. She has lived in Charlotte County for two decades.

This story was first published in the Charlotte Sun newspaper, Port Charlotte, Florida on Monday, October 12, 2009 and is republished with permission.