Sgt. Al Mountenay’s Hastings and Prince Edward Regiment from Ontario, Canada made a night raid on the ancient mountain-top fortress at Assoro, Sicily on July 21, 1943. The Canadian unit forced the Herman Goering Division, pictured here, to retreat from the stronghold after holding what was thought to be an almost impregnable position for months. Photo provided.

The ancient hill town in central Sicily is topped by the ruins of King Robert II of Normandy’s 12th Century castle.   It’s been a stronghold of armies and warlords since 1000 B.C.   In July 1943 the village, the castle and the hill with its 1,100-foot cliff was held by the German’s elite Herman Goering Division during the Allied Sicilian Campaign in World War II.

It was Brig. Gen. Howard Graham’s problem.   He was the commander of the 1st Canadian Brigade of the Hastings and Prince Edward Regiment.  Assoro was his next objective.

Sgt. Alfred Mountenay, of Venice, Fla., was a Bren gunner in A-Company. He joined the company at 16 in Trenton, Ontario two years before the English declared war on Germany in September 1939.

A reconnaissance operation that cost the life of his regimental commander the day before from an 88 artillery shell produced information that the German defenders held the town and the castle above.  Their troops held the high ground and were also protected by a battery of 88 artillery pieces. A spotter atop the castle helped the German cannoneers zero in on approaching Canadian forces.

Mountenay and his late wife, Joyce, on their wedding day, Dec. 16, 1939, in Picton, Ontario, Canada just before he shipped out for Europe and World War II. Photo provided

With the regimental commander dead, leadership of the regiment passed to “Major Lord John Tweedsmuir. He was a 30-year-old English romantic out of another age, according to Farley Mowat, an intelligence officer in the unit who become a well-known writer after the war.  According to Mowat, the brigade commander felt Tweedsmuir lacked the experience to tackle Assoro.  Despite his feelings, he allowed the young commander to move A and B Companies of his command –500 men—into place for the attack on the hilltop fortress and town from the cliff side even though he thought it an improbable undertaking.

It would be A-Company that would lead the assault up the mountainside. Somehow, Mountenay hauled his light machine-gun up the cliff that towered over the plains more than 1,000 feet below.

In a paper written by Lt. Col. Tweedsmuir about his part in the Battle of Assoro after the war, he notes, “By dusk we had sorted ourselves out, stripped for action and eaten an enormous meal. As warriors we did not look particularly prepossessing. After 10 days with virtually no chance to repair or clean our clothing or ourselves, we were a dirty and ragged lot.”

Just before the Canadians began their assault on Assoro on the night of July 23, 1943, Tweedsmuir, a major at the time wrote, “I took a rather unusual step. I have always believed in the power of really good English and so I decided to recite part of Henry V’s speech at Agincourt to my troops.

As we stood there in the gathering moonlight, I think we were all aware that we were the leaders in a great crusade. The whole of that mighty army that was preparing in Britain would not see action for a good many months. I recited from memory Shakespeare’s lines from Henry V:

“’And gentlemen in England now abed

Shall think themselves accursed they were not here,

And hold their manhood cheap.

While any speak who fought with us.’

“Of those tired officers, every back straightened and light returned to their tired eyes as they walked away determined to tackle anything. And they did.”

Sixty years later, Mountenay said, “Don’t ask me how we did it. We just climbed up the cliff at night – two companies.”

Just getting to the base of the cliff behind Assoro at night was a big undertaking. The Canadians got an Italian guide to show them the way through the valleys, over boulders and through gullies. It was a tricky assault that had to be pulled off without arousing the Germans’ attention.

When the two Canadian companies finally reached the sheer rock face at 4 a.m., time was growing short.  They had to reach the top before dawn. Otherwise, they might be spotted by the Germans and become sitting ducks for the defenders as they struggled foot-by-foot up the stone cliff.

Lucky for the attackers, the Germans had not fortified the cliff. Apparently, they felt the enemy would not try to assault them from that direction.

According to Mowat, the intelligence officer, “During the climb that followed, each of us performed his own private miracle. Ledge to ledge we oozed upwards like some vast mold.

“To the east, where a ripple of light was spreading cross the  dawn sky was bursting on us with sub-tropic swiftness. My companion jumped to catch the lip of what seemed to be the next terrace and disappeared above me.”

They had finally reached the top.

“As we broke over the top of the cliff, dawn was just breaking,” Mountenay continued. “There were a couple of Germans at the top which we dispatched before they could sound the alarm.

Sgt. Alfred Mountenay was in Trenton, Ontario, Canada in 1945 when this picture was taken, after serving eight years in the Army.

“The Germans finally spotted us when all of us reached the top and it became light. They tried wiping us out with their 88s,” he said. “Pinky Marlin, my buddy, and I found a little cave we crawled in until the shells stopped falling.”

An artillery major assigned to their unit located an abandoned German telescope on top of the castle that an enemy artillery spotter had used to call down 88 fire on the intruding Canadians. They major turned the tables on the Germans and called in British artillery fire on the enemy cannons that were down near the village on the other side of the mountain.

The British artillery devastated the enemy’s 88s and their crews. This allowed the two Canadian companies to take the town. They surprised the men of the Herman Goering Division, who were just beginning their day. They weren’t expecting Canadian troops to attack them from the rear.

“The Germans were rattled and decided to pull out of town,” Mountenay said.  “It was one of the Germans’ best-trained units that was fleeing our assault.  We were surprised.”

The official Canadian account of the battle in Italy  notes, “The seizure of the Assoro pinnacle by the Hastings and Prince Edward Regiment was as significant to the Canadian Division’s defense as it was dramatic. It upset the whole German plan of defenses at the front, and it hastened the fall of Leon Forte.  Assoro and Leon Forte were two phases of the same battle, as the enemy had to hold the hill or withdraw from it all together.”

After Assoro, the Hastings and Prince Edward Regiment would cross the Messina Straights between Messina, Sicily and Regio de Clabria on the Italian toe.  Their unit was part of Gen. Bernard Montgomery’s 8th Army.

A few days later, as they marched toward their next objective in late 1944, Mountenay became ill. He wound up in the 5th Canadian General hospital back in Sicily, suffering from malaria.

Three weeks later, when he was released from the hospital, he expected to return to his unit.  It wasn’t to be.

Mountenay was assigned to a Canadian grave registration unit for the next couple of months. His job was to truck bodies back from the field and bury them in cemeteries. 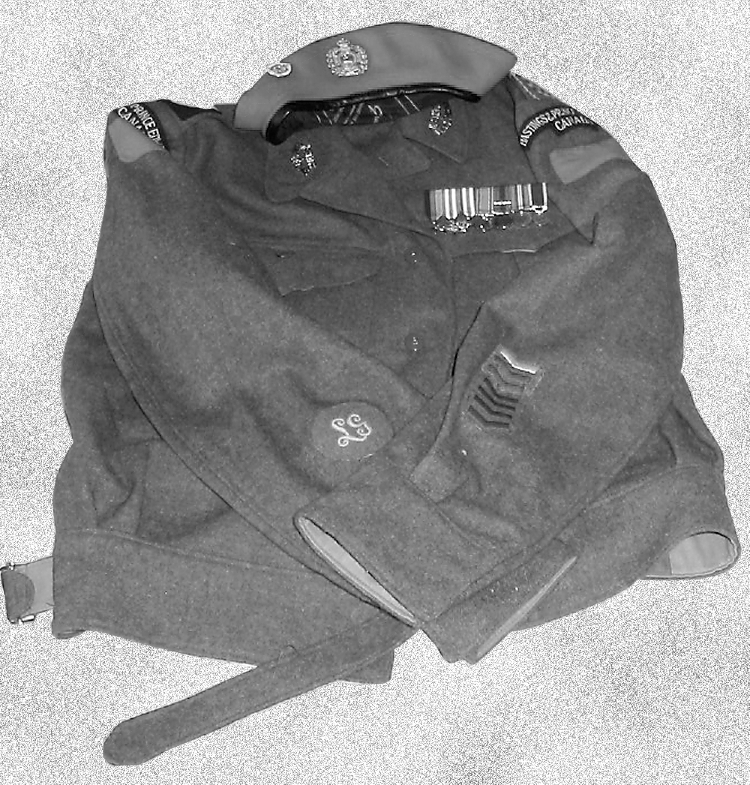 Sgt. Mountenay wore this wool uniform jacket bearing his war medals, the insignia of the Hastings and Prince Edward Regiment and the bright red beret to go with it during World War II. It’s in excellent shape and more important he can still fit in the 60-year-old jacket. Sun photo by Don Moore

A short while later, he was transferred to the 2nd Special Construction Battalion of Canadian Engineers.  When they weren’t building cemeteries, they were repairing buildings for military use all over Italy.

In April 1945, Mountenay was given a 30-day leave to return home to Canada. Before his leave was over, the war in Europe ended. He was discharged from the Canadian Army a few weeks later.

What kind of general was Montgomery?

“As far as I’m concerned he was a good general. One thing he told his outfits: ‘Never send a man where you can send a shell.’  That’s the kind of man he was. He was for his men,”  Mountenay said.

This story was first printed in the Charlotte Sun newspaper, Port Charlotte, Fla and can be found in War Tales II and is republished with permission.