Quartermaster 3rd Class Ed Kalanta of Port Charlotte, Fla., is pictured watching the surrender ceremony from the second deck of the battleship USS Missouri. He’s the sailor at the upper right in the white uniform. Photo provided by Ed Kalanta

Quartermaster 3rd Class Ed Kalanta of Port Charlotte, Fla., was at the wheel of the 45,000 ton leviathan.

At the ripe old age of 20, Kalanta was an old hand at steering the 887-foot battleship. He began doing it almost a year earlier, before she was commissioned at the Brooklyn Navy Yard in September 1944.

With only a foot to spare on each side, the huge battleship sailed through the Panama Canal into the Pacific in October 1944. She arrived in San Francisco Bay on Nov. 28. December 18 the ship sailed under the Golden Gate Bridge and headed for the war zone. It arrived at Pearl Harbor on Christmas Eve.

“I couldn’t wait to get out to the war zone,” Kalanta said as he sat at his dining room table telling his tale 60 years later. “We were crazy kids. I’d say 50 percent of our crew was in their late teens or early 20s.”

From there they went to Ulithi Island to take on ammunition. After that the Missouri sailed for Iwo Jima arriving and taking her position as part of Task Force 58 on Feb. 10, 1945.

“The biggest problem we had at Iwo Jima was kamikazes. They would break through our picket line of destroyers that circled the fleet,” he said. “The kamikazes would come in groups of four or five planes. Their main target was our aircraft carriers that were in the center of our protective ring of ships.

This shot of the Battleship USS Missouri shows four of her 16-inch main guns. The Missouri took part in the Battle of Iwo Jima and Okinawa. The Japanese surrendered on the ship’s deck, in the foreground where this picture was taken. Photo provided by Ed Kalanta

“We’d open up on them with 5-inch guns, then 40 millimeter and finally 20 millimeter anti-aircraft guns. We were pretty lucky at Iwo Jima because I don’t think they sank any of our carriers,” Kalanta recalled.

He said his fellow quartermasters steered the Missouri from a concrete conning tower on the main bridge. It amounted to a 10-by10-foot room with a couple of slits in the front to see forward and two periscopes that allowed the duty officer to look around 360 degrees and see what was going on outside.

When battle stations were called, Kalanta’s station was at the wheel of the ship. He was at the wheel when the Missouri was involved in the Invasion of Iwo Jima. The fleet would circle the eight-square-mile island, like a bunch of Indians in a Hollywood western. She was firing shells that weighed as much as a car from their position in the fleet 15 to 20 miles off shore.

By March 1 the battleship was taking part in the preliminary attack on Okinawa Island, the last major battle in the Pacific. The Marines stormed ashore on Easter Sunday morning, Aug. 1, 1945. 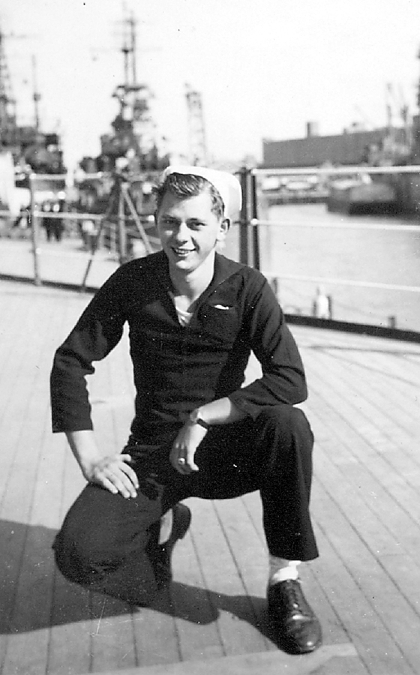 This was Ed Kalanta aboard the Missouri at 19 years old in 1944 during the middle of World War II. Photo provided by Ed Kalanta

Kalanta’s most vivid recollection aboard the Missouri during the battle was when a kamikaze hit the battleship. There was a huge increase in the number of enemy suicide planes attacking the U.S. fleet.

“At Okinawa we had kamikazes attacking four or five at a time. Then 15 minutes later another batch of enemy airplanes would attack us,” he said. “One of our fighters shot this Jap plane down. As it was going in the drink the enemy fighter split in half. Half of it, with the mangled body of the dead Jap, landed aboard ship. It hit the Missouri on the starboard side amidships near one of the five-inch guns. No one aboard the battleship was hurt and it didn’t do much damage.

“We pushed the remains of the battered airplane over the side and kept the body of the Japanese pilot. He was buried with military honors. We wrapped his body up in canvas and laid a Japanese flag over it. The chaplain said a few words and an honor guard buried the enemy aviator at sea. I didn’t get to watch because I was at my battle stations steering the ship,” Kalanta said.

“Adm. Halsey had his own bridge located just below the main bridge. The only time I saw him was one day off Okinawa. I was coming down the ladder from the main bridge and he was out on his promenade exercising. I almost ran into him.

“’Take it easy son, take it easy,’ the admiral said to me when I nearly walked into him. He was dressed in fatigues and wore a cap. Halsey was kind of a round, small guy,” Kalanta recalled. 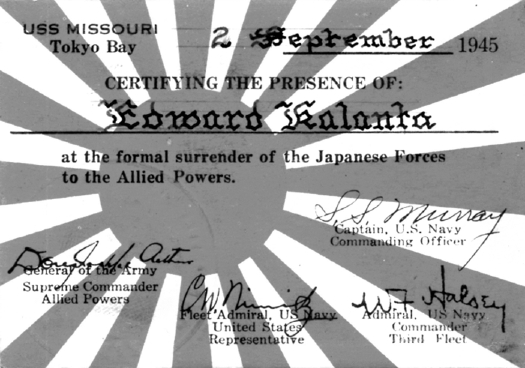 Every one of the Missouri’s crew received a card like this for taking part in the surrender in Tokyo Bay almost 59 years ago.

Eighty-two days after the Battle of Okinawa began it was over. By then, 7,373 U.S. servicemen had been killed on shore and 32,056 wounded. In addition, 5000 U.S. sailors died and 4,600 more were wounded aboard ships, mostly from kamikaze attacks. The enemy lost approximately 107,000 soldiers killed and 7,400 POWs taken.

A few days later, Halsey and the fleet were steaming off Okinawa, near Kyushu Island, the southernmost of the Japanese main islands.

“We got word over the radio that the first atomic bomb had been dropped on Hiroshima on Aug. 6. I don’t think it registered with us because we didn’t know anything about the bomb,” Kalanta said.

Then came the second bomb and a couple of days later the Japanese surrendered on Aug. 15, 1945 (Pacific Time). There was jubilation among the 3,000 sailors aboard the Missouri.

For more than a week, the battleship with Halsey aboard, sailed off the coast of Japan waiting for orders to proceed with the occupations.

“Tokyo Bay was full of enemy mines and I was at the wheel of the Missouri when we entered the harbor in the morning,” Kalanta said. “The Japanese pilot was giving instructions to our interpreter and the interpreter gave the information to the captain who gave me a few course changes. It took us a couple of hours to reach our anchorage in the bay because we were going slowly.” 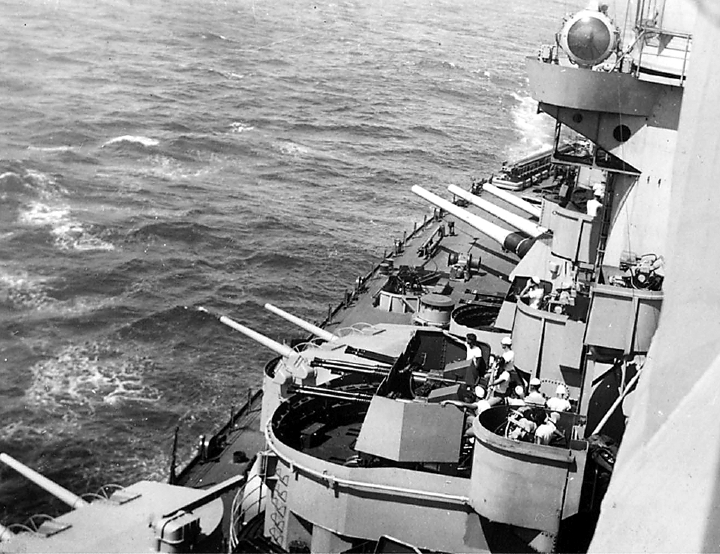 Pictured are some of the Missouri’s five-inch and 40 millimeter port side guns. The battleship’s 16-inch main guns could fire a shell the size of a car 25 miles.

Four days later, Sept. 2, 1945, the day the surrender was signed on the bow of the Missouri ending World War II, the sailors aboard the battleship were up early.

“On that day Fleet Adm. C.W. Nimitz boarded the Missouri at 8:05 a.m.,” the official “History of the USS Missouri” notes.

Kalanta picked up the story from there.

“I was watching the whole thing from the main bridge right above the table where the surrender documents were signed,” he said. “Every admiral in the Pacific Ocean was there. They were all aboard the Missouri by 8:30 a.m. for the signing.

“By 8:45 a.m. General of the Army Douglas MacArthur arrived aboard a destroyer. He couldn’t walk on water so they put a gangway from the destroyer across to the battleship for him.

“The Japanese delegation arrived in a whale boat 10 minutes later. There were eight of them. When they came aboard the Missouri you could hear a pin drop.

Kalanta looks at a painting of his favorite ship. As a teenage sailor World War II was a big adventure for him aboard the USS Missouri fighting at the close of the Second World War in the Pacific. Sun photo by Don Moore

“MacArthur, who was running the show, read a very short prepared statement about the surrender. After he stood at a microphone and called up the various Allied delegates to sign for their country,” Kalanta said. “Nimitz signed for the United States. Only the major countries signed the document—American, Britain, France, Russia, China. That was about all.

“Then the Japanese signed. After the signing they were the first to leave the ship. It was all over in 30 minutes,” he added. “Within an hour all the dignitaries had left and we went back to our regular duties.”

World War II was officially over.

This story was first published in the Charlotte Sun newspaper, Port Charlotte, Fla. on Sunday, July 11, 2004 and is republished with permission.