Gen. Dwight Eisenhower, Supreme Allied Commander, talks to 101st Airborne Division paratroopers in England shortly before they jumped on D-Day during World War II. Pvt. Robert Granche of Port Charlotte, Fla. was one of the ‘Screaming Eagles’ who was there that historic day. 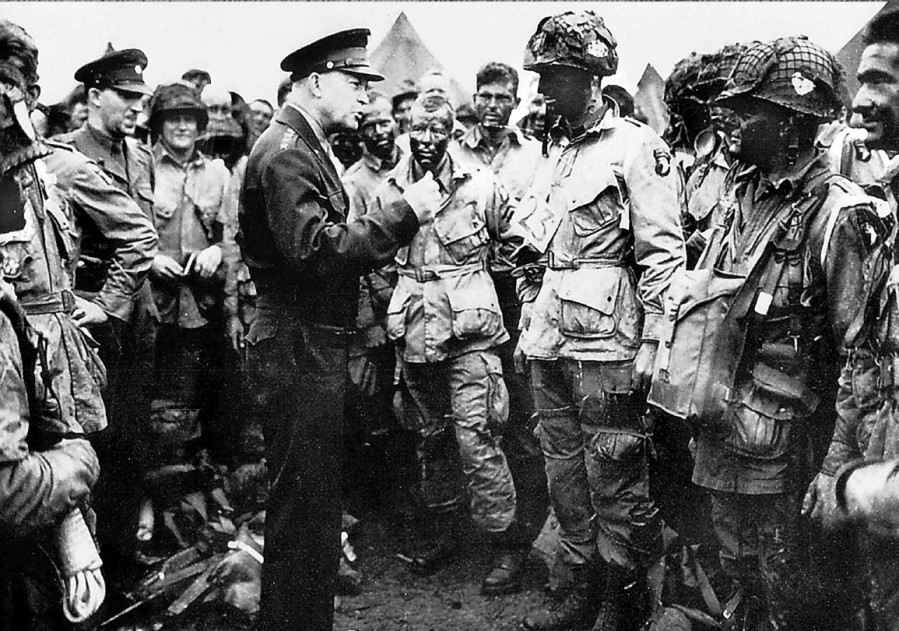 Gen. Dwight Eisenhower, Supreme Allied Commander, talks to 101st Airborne Division paratroopers in England shortly before they jumped on D-Day during World War II. Pfc. Robert Granche of Port Charlotte, Fla. was one of the “Screaming Eagles” who was there that historic day. Photo provided

Pfc. Robert Granche was a “Screaming Eagle” He served in the 101st Airborne Division that parachuted behind enemy lines in the dark on D-Day morning, June 6, 1944.

Granche fought his way up “Hell’s Highway” into Germany and nearly died. He was also one of the “Battered Bastards of Bastogne.” At Bastogne the 101st was surrounded during a major German offensive resulting in the “Battle of the Bulge,” the largest American land engagement in Europe in World War II.

“At 1:20 a.m. we were flying over the drop zone in France,” the 81-year-old Port Charlotte, Fla. man recalled. There was so much flak from enemy shells the C-47 transport we were in was rocking back and forth from the explosions.

“I was standing about three back from the door looking out the plane wondering, ‘What the hell am I doing here?’

“Every tenth bullet or so was a tracer. And every tracer looked like it was coming right for you, even if it wasn’t,” Granche said. “Coming down in my parachute I crossed my legs. I didn’t want to get hit in a bad place,” he said.

“I could see for quite a distance because the Germans had set a couple of hay stacks on fire below us that illuminated the whole area.”

Anti-invasion poles were sticking in the ground all over. They were placed like giant skewers to impale anything coming in by air.

Granche and his .30-caliber light machine-gun hit the dirt without a scratch. Six or eight other members of his unit landed nearby. They had missed their designated drop zone by eight miles.

The unit was supposed to land near Caranton, France, a city about the size of Port Charlotte, a dozen or so miles from the Normandy beachhead where tens of thousands of Allied soldiers would land a few hours later to begin the invasion of Adolf Hitler’s “Fortress Europe.” 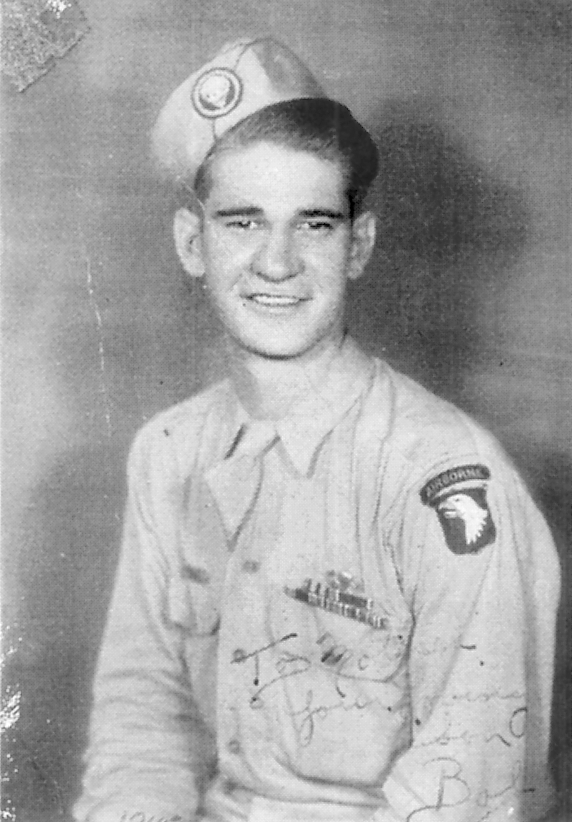 This old newspaper photo of Pvt. Robert Granche at 19 was taken shortly after he completed jump school.

“Our objectives were to disrupt communications, stop railroad traffic and blow up bridges so the Germans couldn’t bring in reinforcements. Then we had to clear out the pockets of enemy between where we were and the coast to allow our guys on the beach to have a clear path into France,” he said.

The fact Allied airborne troops were scattered all over the map by accident turned out to be a blessing for Granche and the others that night. It confused the Germans and allowed the lightly-armed airborne soldiers to play havoc in the dark with the much better equipped and entrenched enemy.

“Right after we landed, Lt. Joe Crilley and I started collecting as many of our guys as we could to accomplish our mission. We hadn’t gone far when an ambulance came down the road toward us,” he said.

“The lieutenant and I got in a ditch along one side of the road. I set up my machine-gun. We didn’t shoot at the ambulance. We let it go by, but then it backed back up to where we were hiding and stopped.

“Out jumped seven or eight armed German soldiers,” he said. “Crilley tried to pull out his .45 pistol in his shoulder holster, but it was strapped in and he was so excited he couldn’t free it.

“‘Don’t let them get away,’ he yelled to me. I opened up with my machine-gun and got them all,” Granche said. “We had been on the ground less than an hour and already had our first battle. It was only 2 a.m.”

They headed for their initial objective. They were supposed to blow the bridge before Caranton. He and Sgt. Gann had paired off and were going inland together.

Granche captured this 14 year old German soldier was captured by Granche a few days after landing in Normandy in 1944.

“I didn’t want to shoot the boy so I carried him back to where we were holding prisoners. He carried my carbine,” the old soldier said. “Why not? The kid was done with war. He had had enough.”

He took a picture of the boy from his wallet. He kept it among his war memorabilia all these years.

It would be three or four more days before Granche and the others  made it to Caranton, their first major town. They never blew up the bridges leading into town because things were going well for the 101st fighting its way up the Cherbourg Peninsula. Instead of destroying the bridges the Allied forces needed them in tack to continue their advance.

Four or five weeks after the “Screaming Eagles” dropped into Normandy on that historic day 59 years ago, the airborne division was pulled out of the front lines and returned to England to regroup for its next engagement. It wouldn’t be long.

On Sept. 17, 1944 the 101st jumped into Holland near Son in “Operation Market Garden.” They were part of the largest parachute actions in World War II. It involved American, English, Canadians and Polish Divisions—more than 50,000 paratroopers hit the silk that day.

“Our objective: capture canal and river crossings over a 15-mile stretch between Eindhoven and Veghel to facilitate the capture of Arnhem by the British,” he said. “They called it ‘Hell’s Highway’ because that’s what it became for us.

Robber Granche (left) with Bill Bordas, an aerial photographer friend, who grew up with him in Pittsburgh, Pa.

“I landed without any problems. But a short while later I got hit in the stomach with a spent bullet that only went in about a half-inch. The medic pulled out the slug, put sulfur powder on the wound, banged me and sent me back to the front,” Granche said.

“After midnight we were coming down this trail in the woods. I had my machine-gun and a carbine. As we came up to a road we could see three guys standing around talking.

“We walked right up to them. Then we realized they were Germans. We all started shooting at each other,” he said. “When the dust settled there were three dead Germans laying in the road.

“We were supposed to set up a road block at this point. So we toppled an oak tree across the road. I thought it might be a good idea to prop the dead Germans against the tree and put rifles in their hands. At least if a German tank came along and spotted them maybe it wouldn’t try and run them over,” Granche said. “What we didn’t know was there was a nearby house with a bunch of Germans in it. They heard the shooting and came to investigate.”

He and his squad were out-gunned three or four to one. They hunkered down behind the road block and shot it out with the Germans until a “potato masher,” a German hand grenade, landed in his lap in the dark.

“I scrambled to grab the grenade and toss it back, but lost it in the dark. Realizing it was about to go off, I jumped from behind a tree, where I had been hiding, to escape the blast. But I didn’t get one foot out of the way quickly enough. It exploded taking a hunk of foot with it.

“My guys though I was dead lying out there in front of the tree. So did the Germans. Since we were being out-gunned what was left of our patrol decided to pull back.

“When I realized I was all alone and the Germans were advancing toward my position firing away, I slid back behind my machine-gun. As the Germans came across the road I opened up on them. The last one fell about six feet from the muzzle of my gun.”

He hobbled back to his lines using a stick as a crutch. He received medical attention and by this time his story had made the rounds of the front line troops in his unit.

Granche was recommended for a Silver Star for bravery which he received a short while later.

“They told me, ‘You’re a brave guy,’” he remembers from so long ago. “You know, when a rat is cornered it’s gonna fight like hell.  I felt like a cornered rat with all those Germans rushing me. I wanted to come home alive,” Granche said.

This story was first published in the Charlotte Sun newspaper, Port Charlotte, Florida in 2003 and is republished with permission.

Survivors include his wife, Frances; daughters Katherine Weissert and Christine, both of Pennsylvania; a son, Robert S. of Encinitas, Calif.; a sister, Rita McLaughlin of Port Charlotte; a brother, Marvin of Delaware, Ohio; five grandchildren; and one great-grandchild.

A memorial service will be at 3 p.m. Sunday at Christ the King Lutheran Church in Port Charlotte. National Cremation Society, Port Charlotte chapter, is in charge.
Memorial donations may be made to Hospice of Southwest Florida, 5955 Rand Blvd., Sarasota, FL 34238.