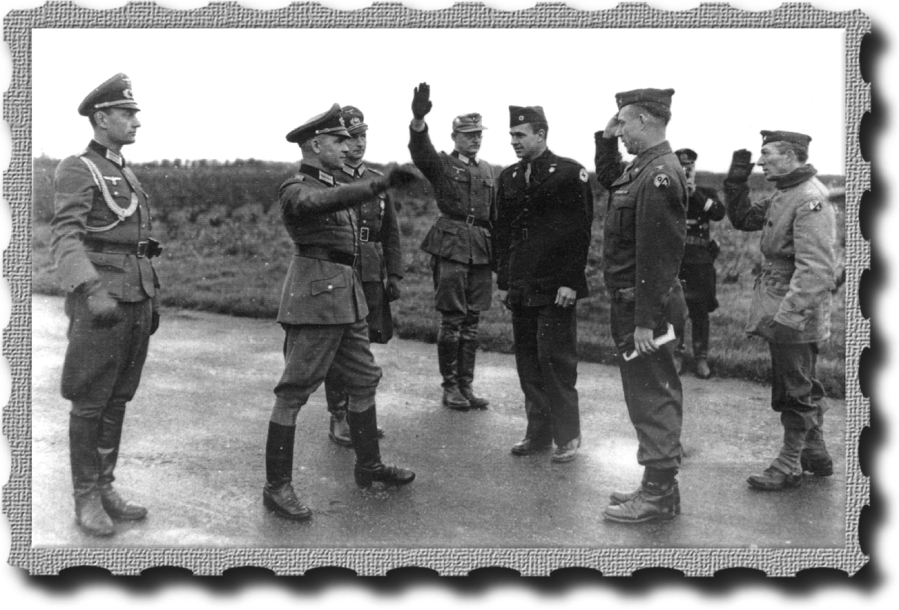 The red, white and black Nazi flag was in as good condition, swastika and all, as the day Mike Clemente pulled it off a flag pole that stood in a tiny public square in Remagen, Germany almost 60 years ago.

The 78-year-old Port Charlotte, Fla. resident was a member of the 9th Infantry Division, 47th Regiment that fought across Europe during World War  II.  As a replacement soldier who reached the front lines a month after the Allied invasion of Normandy, on June 6, 1944,  this “foot slogger” spent almost 200 days at the front dodging bullets and trying to survive. 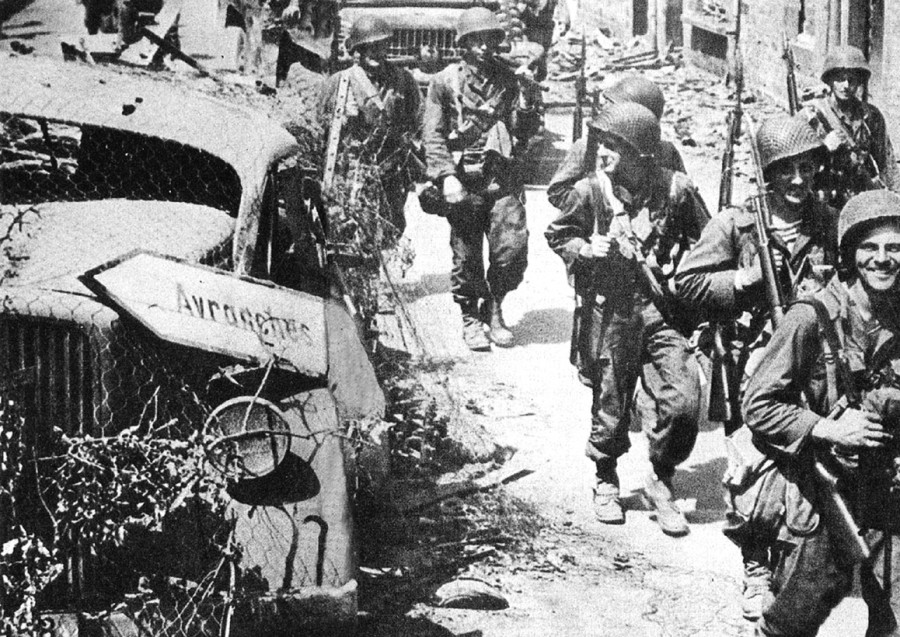 Pvt. Mike Clemente, with his Browning Automatic Rifle on his shoulder is the sixth soldier in the line walking through Avranches, France near the Normandy beachhead where the Allies first landed in Europe during World War II. He was one of the first infantrymen to cross the Bridge at Remagen, Germany as U.S. forces advanced into the Fatherland.

By the spring of 1945, the 9th was in the process of hooking up along the Rhine with Gen. George Patton’s 3rd Army. The American forces were looking for a way across the river into the heart of Germany.

On March 7, 1945, Clemente and the men of the 47th found it. The bridge at Remagen was still standing when their unit reached the little German town. Hitler had ordered that all bridges leading across the river be blown, but this one was still standing.

“Our objective was an assault on the bridge,” he recalled. “We had to fight our way into Remagen and get as close to the bridge as we could.”

His unit waited in a deserted woodworking factory across the street from the span. Tanks and artillery softened up the German resistance on the far river bank while Clemente and the others cooled their heels.

“That’s the hardest part of battle. You know you’re going and the waiting is very difficult,” he said.

“I was sitting in the factory office listening to all the tanks and artillery going off. Finally, I looked around and found a bookcase filled with books.

“A copy of  Mein Kampf, Adolf Hitler’s autobiography, was on the shelf,” he said.

“Out of curiosity, I pulled it out. On the fly leaf, it was signed by Hitler. I was tempted to take it, but an infantryman can only carry so much.

He put the Fuehrer’s book back on the shelf and started looking for something else to liberate as a way of remembering the day. He glanced out a window and spotted the Nazi flag waving in the breeze. Just what he was looking for, he thought.

Mike Clemente of Port Charlotte, Fla. holds a Nazi flag he pulled off a flagpole in Remagen, Germany shortly before he ran across the only bridge left standing over the Rhine River on March 7, 1945. Sun photo by Don Moore

After pulling it off its pole, he took his fountain pen and printed around the edge of the round white center in small, fine, black letters:

“I was impressed with the fact this was a historic moment,” he said. “I took the flag, folded it up and put it in my pack.”

The word reached the 47th that the Germans had the bridge wired with 65 tons of munitions. German troops were working to detonate the explosives to collapse the Lundendorf Bridge.

“We heard a tremendous explosion around the bridge. When the smoke cleared, it was still standing and tons of explosives were still hanging from the bridge,” Clemente recalled.

An American armored unit finally sent a couple of tanks across the bridge accompanied by 50 to 75 support troops. When they reached the other side of the river the American contingent turned right toward Erbel, a little German town along the river’s east side.

“I was standing there with my BAR (Browning Automatic Rifle) and this sergeant said to me, ‘O.K., Clemente, go!’

“I said a few Hail Mary’s and ran like hell from pillar to post across the 1,800-foot-long bridge. There were people sniping at the bridge from all directions with machine guns, mortars and artillery. The Germans were trying to set off the tons of explosives they had attached to the bridge.”

Clemente was the first soldier in his outfit to reach the enemy side. When he got there, all the American troops were holding was a beachhead. He spotted the train tunnel straight ahead and made a dash for it.

“Enemy soldiers had retreated around a bend in the tunnel. It was my job to make sure they didn’t retake the tunnel entrance.

This is the tunnel Pvt. Clemente hid in after running across the bridge at Remagen, Germany. He discovered a high-ranking German officer hiding in the tunnel with a solid-gold field marshal’s baton encrusted with jewels.

“When I reached the safety of the tunnel I found three people inside – a second lieutenant, an American naval officer from God knows where, and a high-ranking German officer holding a field marshal’s baton,” he said.

“I walked up to the German officer, who was dressed in a gray uniform with a hell of a lot of gold braid on it, and said, ‘Good morning.’ Then I asked to see the baton. He handed it to me.

“It was solid gold and heavy. A field marshal’s baton is like two door knobs on each end with am 8 or 9-inch gold shaft in between. It was emblazoned with diamonds, emeralds and all kinds of jewels.

“As I held the baton in my hand, I said to myself, ‘I wonder if I can run fast enough to get away with it. Of course the answer was, ‘No.’

“I said to the German officer as I handed the baton back, “It’s very beautiful.”

“That jewel-encrusted, solid gold baton would be the officer’s safe passage. It would definitely end up with some high-ranking American officer,” Clemente said.

Eventually more and more members of his unit reached the tunnel. They moved out when they had 40 men and headed down a dirt road paralleling the Rhine into open territory.

Their objective was the top of a hill 1,000 to 1,500 feet away. They started up the embankment toward the top of the hill, passing a small white house and a crucifix located in a cave and wound up digging in along a potato field on the hilltop.

“About 10 p.m. someone crawled up to my foxhole and said, ‘Clemente, follow me. Just bring your BAR and your web belt of ammunition.’ The sergeant gathered 12 of us together and said, ‘We’re going to find out where the Germans are.”

Off they went, one behind another, holding on to the man in front by the belt or shirt as they struggled along a sunken farm road in the pitch black night.

Pvt. Clemente gets a little R and R in Verviers, Belgium during the war. Photo provided

“We got into enemy territory about 1,500 feet and I glanced to my right. There was a German soldier cupping a lit cigarette in his hand. He was on a hill that ran beside the road, silhouetted against the black sky. I could see a machine gun at his feet. He was so close that if he had taken a rifle and held it at arm’s length and dropped it, it would have hit me in the head,” Clemente said.

The sergeant leading the 12-man column stopped and turned the man behind him around. That man turned the next soldier behind him around and so on until they reached Clemente at the end of the line. The squad quietly slipped away without the German soldier ever realizing they were there.

The next morning the German troops went on the offensive. They knocked out a half-dozen American halftrack troop carriers that moved up with their unit during the night. Then the Germans began a major assault on the very thin U.S. line.

Over and over, the 47th repulsed the stubborn enemy attacks as both sides lost more and more men. After a week of trying to overpower the Americans and run them back across the Rhine, the Germans withdrew deeper into Germany.

By this time, Clemente had been on the front line for months. He had seen hundreds of men arrive, fight for a few days and die or receive horrible injuries. At the “Battle of the Bulge” a few months earlier, he lost a bunch of buddies and many more died at the Hurtgen Forrest.

“At one point, some replacements came up and the sergeant said I had to take one under my wing. I didn’t want to do it, but I had to, he said. “I had reached the point where I didn’t want to know anything about the new men who came in.

“I told this new guy,’ You do whatever I tell you even if it sounds stupid.’ The man was 18-years-old, straight off a farm in the Midwest.

“We moved into an area on the crest of a hill and started to dig in when a sergeant came by. I was digging in behind a large tree. The sergeant said, ‘I want you to dig about 10 feet away.

“I don’t want to dig there. There’s no protection,’ I told the sergeant. But he made us dig a foxhole where I didn’t want it anyway.”

A short while later, Clemente became ill after eating his K-rations. He went to a nearby aid station for relief.

Before leaving the replacement soldier in the foxhole on the hill, he told the kid, “’The first time you hear any artillery fire, get out of the hole and behind that tree over there.

“’Don’t do it,’ said the sergeant standing close by.”

While Clemente was at the aid station, enemy artillery shells began falling in their sector. Jeeps started arriving at the station with the injured.

“There was the kid on a stretcher, “he said. “I said to the Jeep driver, ‘What happened to him?’

“’An artillery shell landed in his foxhole.’ The driver replied.

“When a doctor looked at the kid, he shook his head. A couple of assistants took the young solder’s stretcher out by the barn 100 feet away and left him to die. They pulled a wool blanket over his head.

“When thing quieted down, I asked a medic where the kid was. He told me, ‘Out by the barn.’ I found him out there. When I pulled back the blanket covering his head, he was in his death throes. I grabbed his hand, held it and cried.

“When I went back to the aid station an officer said to me, ‘Why did you go out there to see the kid? Why did you do that?’

“Well, I said, ‘He was my foxhole buddy. If I had been with him last night, he wouldn’t be dead this morning. I never even knew his last name.’” 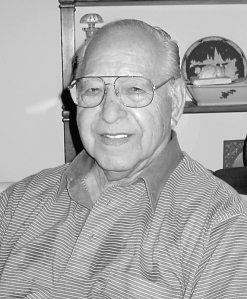 This story was first published in the Charlotte Sun newspaper, Port Charlotte, Florida on Thursday, March 7, 2002 and is republished with permission.