These are the officers of the 703rd Squadron. Jimmy Stewart is fourth from the left in the back row. Jim Myers of Englewood, Fla., is second from the right in the front row. They are standing in front of a B-24 Liberator.

“Jimmy Stewart was just one of the guys after we got to know him,” Jim Myers said.  The Englewood, Fla. aviator flew with the movie star in a B-24 Liberator bomber during World War II.

“Jimmy became our squadron commander early in the war when we were back in the states, and I became the squadron bombardier,” Myers said. “I flew 13 missions with him.”

Even in those days, Stewart was a star. He had already made the films: “Mr. Smith Goes to Washington” and “The Philadelphia Story” when he joined the Army Air Corps. Yet to come: “It’s a Wonderful Life,” “Vertigo” and many others.

“We were awestruck when he became our squadron major. But after he’d been with us for a while and we got accustomed to him, he was just one of the guys.

“He was a hell of a good pilot,” Myers said. “He learned to fly in Hollywood before the war.”

Myers recalls Stewart as a “wonderful leader.” He wrote letters to the wives and parents of every man in his squadron when they were  shot down. He was a good example to all of the men in the squadron, Myers said. 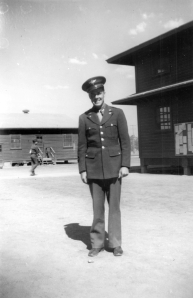 Young recruit: This is Jim Myers of Englewood when he was attending Officers Candidate School in Santa Ana, Calif. in 1941.

Probably the closest Stewart came to becoming a war casualty was on a raid over Stuttgart, Germany aboard a B-24 both he and Myers were flying in. Stuttgart had an airplane factory and a ball-bearing works the 8th Air Force was interested in leveling.

“Stewart was flying as co-pilot in our plane and one of those shells from a German 88 flak gun went right through his seat, between his legs and on up through the top of the damn airplane,” Myers said. “When we landed, he was blue from the cold whistling through the holes in the plane, but he hadn’t received a scratch.

Myers wasn’t injured by the German shell either. Even though his position as bombardier was in the nose of the Liberator – a few feet from Stewart where the enemy shell penetrated the top and bottom of the airplane.

“When he wasn’t flying, Jimmy couldn’t go to town because they would just mob him. He was so popular with his fans,” he said. “The ‘Piccadilly Commandos’ (ladies of the evening) would have really nailed him if he had gone off the base into London.”

So the Hollywood idol spent lots of time at the officer’s club on base.

“When he was drinking, he could play the black keys on the piano,” Myers said. “His favorite song was ‘Ragtime Cowboy Joe.’”

In formation over enemy territory, the Liberators usually flew at 18,000 to 23,000 feet. They could fly faster, higher and carry more bombs than a B-17 Flying Fortress. The two bombers are what the Americans used to destroy Germany during the Second World War.

“We hated the B-17s. We did not fly with them and they did not fly with us,” Myers said with a chuckle. “One of the things B-24 pilots would do is pull up beside a B-17, feather a prop to slow down his 24, then gun the engines and leave them behind.”

Running the show: The 703rd Bomb Squadron’s operations crew that made sure the squadron’s B-24 Liberator bombers were in the air over Nazi occupied Europe.

When the 703rd Squadron first arrived in England in September 1943, bombing missions over enemy held Europe were tough. There was no fighter’s protection for the bombers of the 8th Air Force that made the daylight bombing runs. They had to fend off German fighters as best they could with twin .50-caliber machine guns mounted in the turrets in the nose, top, tail, belly and one each in the waist on both sides of the plane.

“I’d say we were losing between 15 and 30 percent of our bombers on each mission,” Myers said. “We flew our first six or eight missions without any fighter protection. Toward the early part of 1944, we got protection from our P-47, P-51 and P-38 fighters.”

Not only were there German fighters to contend with, but there were 1,070 flak guns in “Flak-Happy Valley.” That’s what the bomber crews called the Ruhr, Germany’s industrial heartland. 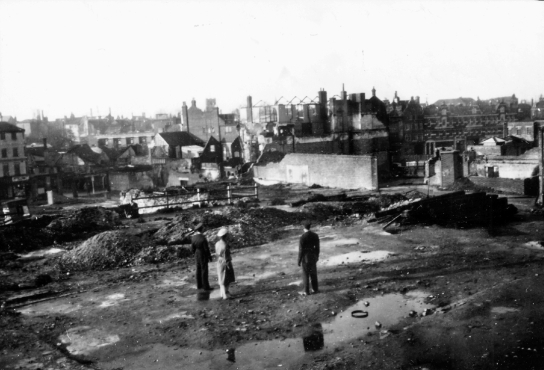 Norwich, England looked like this after it was bombed by the Luftwaffe during World War II.

Myers’ most hazardous mission he and his air group flew was to knock out the Germans’ V-1 rocket launching pads along the coast of France. These were the first unmanned rockets used by the Germans to pulverize London during the war.

“We did a low-level run over these rocket-launching sites, and when we returned to base there were more than 400 holes in our airplane from anti-aircraft fire. Our tail gunner was blown out of his turret…at one point he was lying on the catwalk down the center of the plane,” he said. “The plane was so shot up we had to put a new pair of wings and a new tail on her.”

Amazingly, no one was injured aboard their Liberator on that mission. The squadron damaged the German’s rocket launching site.

This story was first printed in the Charlotte Sun newspaper, Port Charlotte, Fla and can be found in War Tales II, chapter 1 and is republished with permission.

*War Tales II is  available for purchase for $24.95 at the Military Museum, Fisherman’s Village, Punta Gorda, Florida or email Don at DonMoore39@gmail.com.