Like a Biblical plague of locusts, the kamikazes swept across the Allied fleet in the Southwest Pacific during the closing months of World War II. The Japanese called them the “Divine Wind.” The sailors in Adm. “Bull” Halsey’s Task Force 38 called them “hell.”

The Imperial Navy’s suicide pilots sunk or damaged 232 ships in that battle alone. Some 3,500 kamikazes were shot down in this attack. Before they went down in flames, the Japanese aviators sent 30 Allied ships to the bottom.

Thousands of Japanese pilots went to their fiery deaths crashing headlong into 122 destroyers, 19 aircraft carriers, 10 battleships, 12 cruisers and 69 auxiliary ships during the 82-days it took to defeat enemy forces on Okinawa.

In this engagement—involving air, sea and land troops—11,933 Allied servicemen lost their lives and 31,312 were wounded. The enemy suffered an estimated 109,629 killed and wounded.

The disastrous results of the Japanese suicide pilots’ attack were mostly kept from the American public during the war. Military leaders and politicians didn’t want the public and the enemy to know how effective the kamikaze pilots were.

Albert Trombi of Englewood, Fla. and Dr. Douglas Murphy of Venice, Fla. were aboard the USS Wren, a Fletcher-Class destroyer off Okinawa in the thick of the kamikaze attacks. Their ship was part of Destroyer Squadron 57 that kept the enemy at bay.

Japan’s strategic objective was to cripple the U.S. Navy at Okinawa with suicide pilot attacks. Its ultimate goal: to prevent the invasion of mainland Japan.

Weeks after Okinawa fell, President Harry Truman ordered the atomic bomb dropped on Hiroshima. A few days later, after a second bomb was dropped on Nagasaki, on Aug. 14, 1945, Japan announced it would unconditionally surrender but not before tens of thousands of sailors, soldiers and marines who arrived aboard 1,200 ships encircled Okinawa and gave their all. What resulted was the greatest air-sea battle of all times.

Squadron 57 formed a double picket line around the island some 60 to 70 miles offshore. Three destroyers were stationed at each picket post. Their job, to alert the fleet to a pending Japanese air attack and intercept and shoot down enemy fighters.

“We were constantly at battle stations day and night because of the kamikazes, Trombi said. “I can remember this twin-engine Betty coming right at me. It was flying 20 feet off the water, waggling its wings. I could see the 40 millimeter tracers (bullets) from the Wren going right through the fuselage, but it wouldn’t blow up.”

Trombi was running for his battle station in the engine room of the destroyer, right where the bomber would strike. He was an 18 –year-old machinist-mate 2nd class who wondered if he was about to be blown into oblivion.

L. J. Adams from Pasadena, Texas, a 20-millimeter gunner aboard the Wren, picks the story from there.

“All of a sudden the Betty made a turn and flew right at me. I had his glass nose in the middle of my site as I tracked him on in.

“Watching the nose of that Betty as it broke through the smoke, it was as if he was trying to get me personally,” Adams said.  The entire war came down to this minute. I was pouring my fire into his nose and my range finder kept yelling, “You’re on him, you’re on him!”

“I stayed right on him as his underside filled my site. It was like watching this dangerous spectacle in slow motion.

“All of a sudden it exploded before my eyes,” Adams said.

The blast showered fire and debris from the exploding bomber all over the Wren’s deck. The destroyer escaped immolation.

Trombi, who was at his engine room battle station, missed it all. He would not find out the full story of what happened on deck that day for more than half a century, until he was given a copy of “Sacrificial Lambs,” a book written by shipmate Bill Sholin about the Wren’s service during the war. 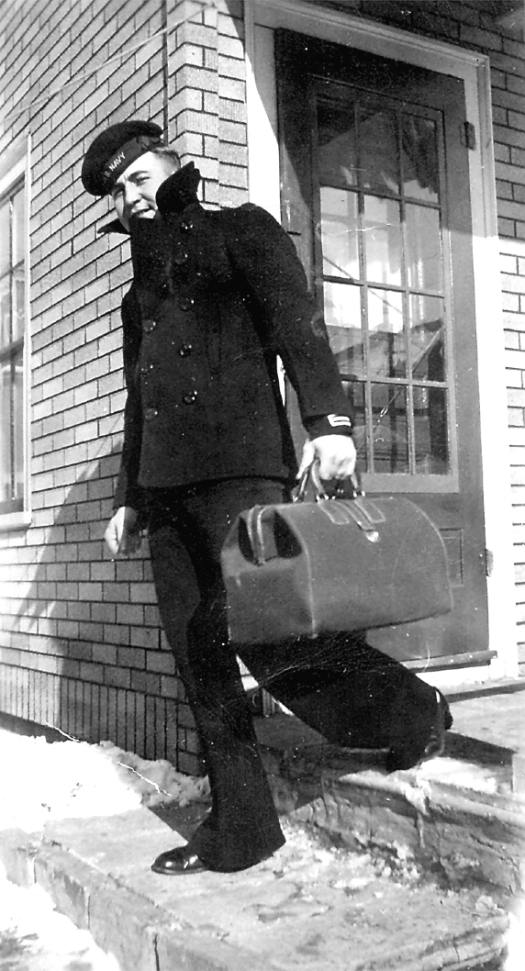 Seaman Al Trombi leaves his Framingham, Mass. home on his way back to the destroyer USS Wren. Photo provided

The hundreds of kamikaze suicide pilots were almost overwhelming at Okinawa, but what was even worse, in many respects, was the shinyos, according to Sholin’s book. These were wooden suicide boats 16 to 18 feet long piloted by a single sailor. Loaded with 600 pounds of high explosive or two depth charges placed in the bow of each boat, their objective was to detonate their craft when it rammed an American ship.

All but their Chevrolet car engines were made of wood. It made them difficult for Allied ships’ radar screens. Stealth gave them a mystical and more sinister quality than the fighters and bombers that could be seen by the naked eye and easily identified on radar.

“To hit these attack boats we had to lower our 5-inch guns so low our cannons were blowing the life lines off the side of our ship. It made it hard to load the big guns because their barrels were so low the loaders had trouble reaching the breeches.”

On one particular night, while on picket duty off Okinawa, the Wren fought a running gun battle with 14 “ghost boats” at different times throughout the night.

“We were going crazy that night down in the engine room with the damn kamikaze boats.” Trombi said “We’d be running at full throttle, 38 to 40 knots, and the captain would order ‘full reverse.” It was nothing unusual.

“It was desperation time for all hands on the Wren,” Sholin wrote in his book. “Men in the engine and fire rooms, as well those in the magazine and handling rooms, had trouble keeping their footing as our ship continued to maneuver radically. Each time, the 5-inch, then the 40 –millimeter and finally the 20-millimeter guns fired. Like sitting ducks we sat waiting and expecting to be blown to bits at any second.

“In a total of eight minutes our three destroyers had apparently destroyed four additional suicide boats. This was about as desperate as a thing could get, but it wasn’t over yet.

“At 2353 (11:53 p.m.) the 14th and last suicide boat appeared on radar. He was 3,800 yards to the northwest and headed for our ships at 20 knots. We opened fire again over the starboard side and quickly closed the book on the Japanese suicide boats,” Sholin noted.

It took Al Trombi (right) more than half a century to learn what happened to the Japanese Betty bomber headed his way. With him is L.J. Adams of Pasadena, Tex. who shot down the kamikaze with his 20-mm anti-aircraft gun. Photo provided

“He was the best captain in the world. He was very calm under fire,” Trombi recalled 56 years later.

When the ship was commissioned, I was there. He told the crew, ‘I want you men to know I intend to take this ship into Tokyo Bay. Anyone who doesn’t want to go, step forward.’ Not a single man stepped forward.”

After Okinawa, the Wren and the rest of the fleet continued sailing toward the Japanese mainland, fewer than 400 miles to the east. Estimates were that at least 500,000 Americans would lose their lives in the final assault on the home islands.

In early August the Wren was one of the first American ships-of-the-line to arrive off Tokyo Bay.

“We were supposed to go into Tokyo Harbor as a spotter for the Battleship Missouri,” Trombi said. “We were convinced we were going to be blown out of the water by the heavy Japans shore batters that rimmed the bay.

“I didn’t know until I read ‘Sacrificial Lambs,’ that President Harry Truman saved my life,” he said. “Just before we headed into shore, on Aug. 5, 1945, the Wren got word to get the hell out of there. It immediately headed to sea.”

What they didn’t know at the time was the “Enola Gay” would drop the first atomic bomb on Hiroshima the next day. Eight days later, the Japanese would unconditionally surrender. World War II would be over.

It was the USS Wren that led the American fleet into Tokyo Bay when the time came. The destroyer dropped anchor beside the Missouri. Trombi and Murphy had a ringside seat on Sept. 2 for the surrender ceremonies held on the foredeck of the “Mighty Mo” a few yards away.

“We saw Gen. Douglas MacArthur on the deck of the battleship Missouri sit all the Japanese dignitaries down. They were in formal attire. They had come to sign the surrender documents,” Trombi remembered. “Doc and I were standing on the bow of the Wren. Scores of B-29 bombers from the U.S. Air Force passed overhead during the signing. Dr. Murphy forgot his camera.

“This was the greatest thing that happened in my life,” Trombi said. “I was just a kid from Framingham, Mass. I’d never been more than 25 miles from home until I joined the Navy. I even got a letter from President Truman when I got out of the Navy thanking me for my service to the country.”

This story was first printed in the Charlotte Sun newspaper, Port Charlotte, Fla. and is republished with permission.