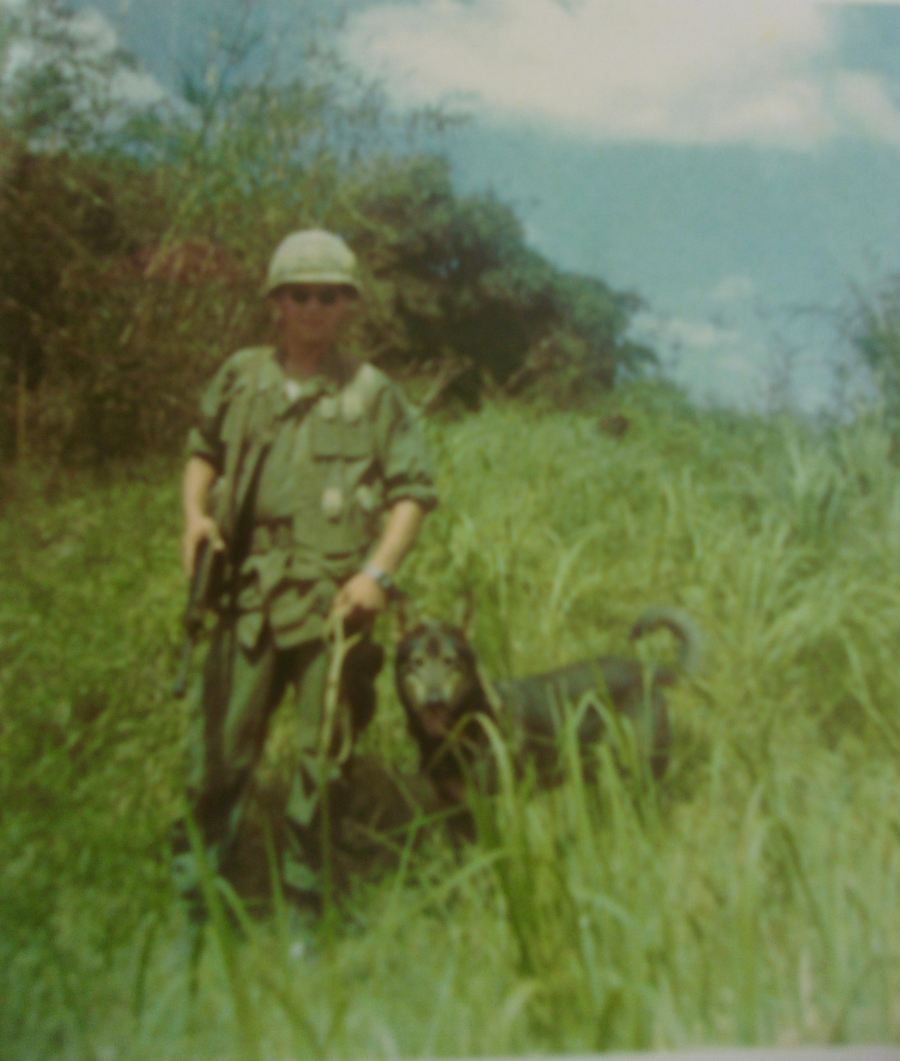 Sp-4 Jim Hunter of Englewood is shown in the field near Cu Chi, South Vietnam with his scoutdog, Champion, in 1969. Photo provided

Within months after losing his college draft deferment in 1968 Jim Hunter, who lives in Sandpiper Key Condominiums on the way to Englewood Beach, Fla., found himself working his German Shepherd scout dog though the rice paddies and jungles of Vietnam as a member of the 44th Scout Dog Platoon attached to the 25th Infantry Division.

Being the point man, the guy out front of his unit, searching for North Vietnamese Army soldiers and Vietcong guerrillas was a hazardous occupation. Now 72, he vividly recalls his year in Vietnam with his search dog Champion.

“There were four types of terrain in Vietnam: rice paddies, heavy jungle, high grass above your knees, and semi-jungle. 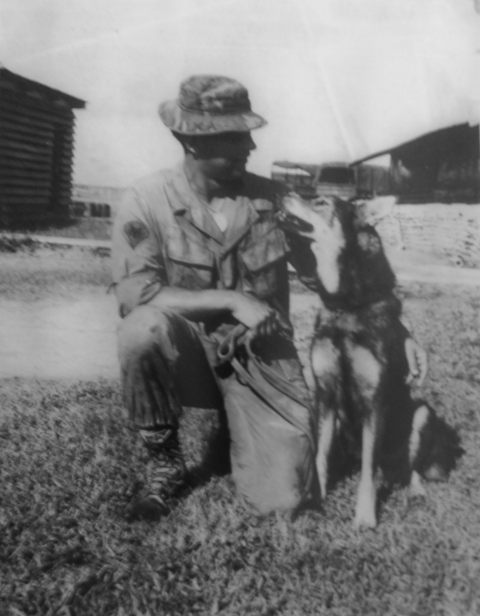 Hunter and Champion are back at base camp with the 25th sharing a moment. Photo provided

“Champion was my second scout dog, Kim, my first dog died from tick fever a few days after I was in country,” he said. It took Champion a week or so to get use to me. I learned how he alerted. Every dog was different.

“Champion alerted by stopping dead still and raising both ears. The first time he did this we were out in rice paddies and berms. I had a company of soldiers behind me and I could see nothing. Then all of a sudden, 30 yards away, I saw the head of a cobra pop out of the water.The guys in my outfit were really impressed with Champion. That cobra was a good 8-feet-long. They took care of it with a hand-grenade.

“Tell me another war story.”

“We were out there in the high grass and started going up a hill when we found a V. C. tunnel,” Hunter said. “We had camped on a V.C. tunnel network. They gave this little guy a .45 pistol, a flashlight and sent him down into the tunnel network with a rope tied around him so they could pull him out if he ran into trouble from the enemy. He was lucky, they didn’t.

“Give me another story,”

“I wore glasses in Vietnam during the day. During the day they were no problem, but at night they were something else. My dog and I didn’t like going out at night. We were out this one night and all of a sudden we heard enemy machine-gun fire. We spread out and started going into the brush in front of us.

“Champion went to the left and I didn’t follow him. I stepped right into an enemy bunker filled with water and my glasses came right off. I fell down and my helmet came off. We were getting enemy fire around us. I’m on my hands and knees looking for my glasses. Luckily I found them and put them back on, then I found my helmet and put it back on. I climbed out of the bunker and went along with the rest of the people. Talking about being scared, I was scared.

“I can tell you one more war story. We were out there in medium jungle when we came across this empty space. We could just sense the enemy was out there. Our captain called up the fire base, but they were too far off for our guns to reach the enemy. 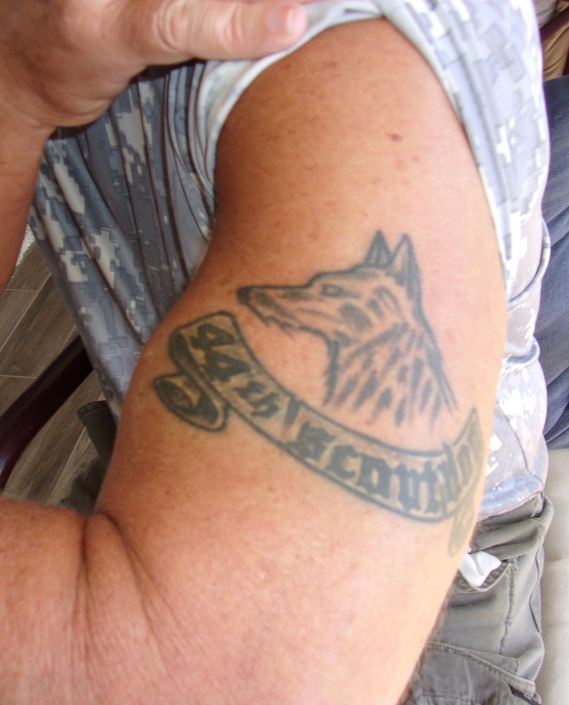 The tattoo on his arm says it all. Sun photo by Mary Auenson

“It just so happened that two F-105 Fighter-Bombers were in the area. We called them in one behind the other and they dropped napalm on the enemy. The whole jungle lit up. They circled and came back and dropped two more napalm bombs on the enemy. They saved a lot of American lives.”

Hunter”s odyssey with the Army began in 1968 while attending Worcester State College in Worcester, Mass., a four-year institution. He had to drop out and went to a two-year junior college because of poor grades. He lost his draft deferment when he switched from a four year to a two year school. After that he got his welcome letter from the government and then was drafted into the Army.

“After basic training at Fort Benning, Ga. I decided to go to OCS (Officers Candidate School). Then I found out you had to sign up for three more years in the military to become a 2nd lieutenant which I wouldn’t do. So they put me in the ’Scout Dog Program’ also taught at Benning,” Hunter explained. “I was sent to Củ-Chi, South Vietnam, near the Cambodian border, headquarters of the 25th Infantry Division eight weeks later.”

Hunter served his one year tour in Vietnam and returned to a USA that was split on the value of the war to this country. He returned to Worcester State and got a bachelor’s degree in elementary education. He spent the next 34 years teaching and retired an elementary school assistant principal.

He loved Champion his scout dog, but neither he nor any of the other dog handlers were allowed to adopt them and bring them home from Vietnam. He said all of the scout dogs died in Vietnam. Today he and his wife, Maureen, have a fluffy little white Havanese. Nothing like his powerful Shepard he cared for over there. He couldn’t bear to get another one. 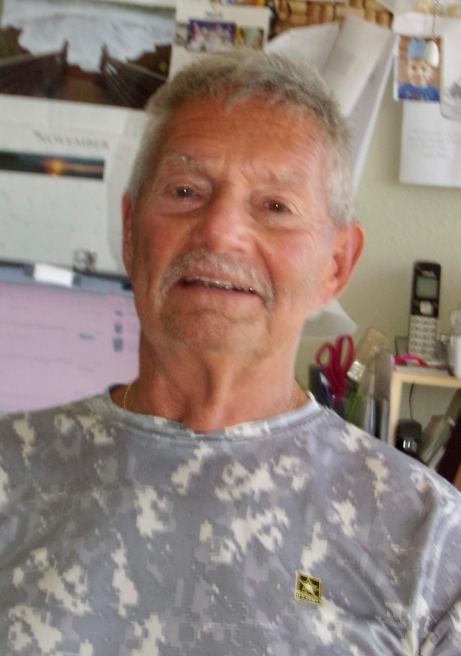 The couple has spent winters here since 2011. They have two sons: Jay and Sean.

“I just want to say, this area of Florida does a tremendous job of recognizing our veterans,” Hunter concluded. “They go out of their way to help them out.”

This story was first published in the Charlotte Sun newspaper, Port Charlotte, Fla. on Monday, Dec. 9, 2019, and is republished with permission.