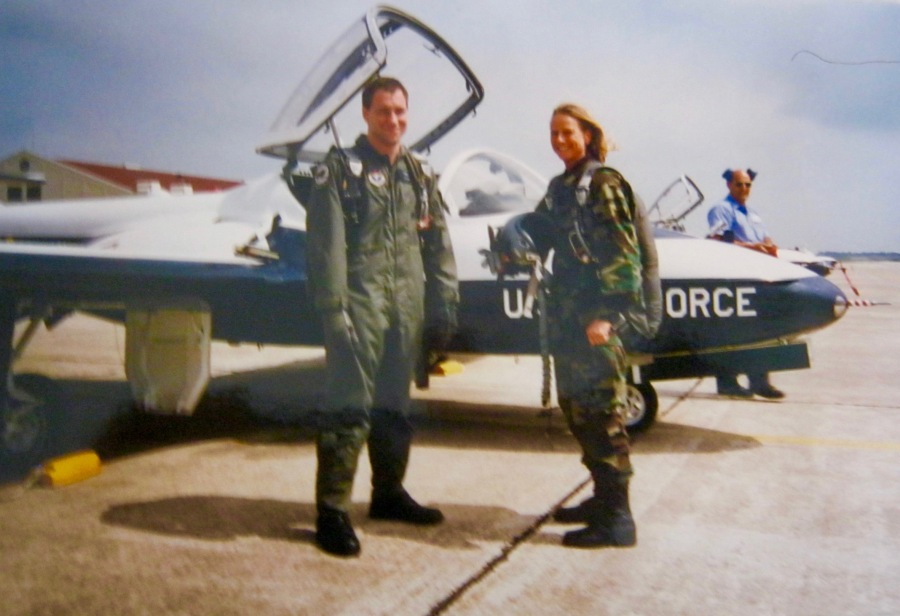 Suzanna Vass served four years active duty in the Air Force, first as a medic and then 22 years as an Air National Guard with the 171st Air Refueling Wing. Now a Venice resident, she works on the emergency room staff at Venice Hospital and on the side she has a side business called “ER-2-YOU.”

She will come to your home on medical calls.

After high school she received a basketball scholarship to the University of Pittsburgh. By the end of her freshman year in college she dropped out after struggling with classes.

“I was 19 years old and didn’t know anything,” she recalled almost 40 years later.

“I went home from college and my parents drove me crazy. I decided to go in the Air Force. That was 1982.”

“There were 53 girls in my barracks in basic and all of them were crying almost every night. I told my drill sergeant, ‘You can’t yell at me any louder than my mother did.’”

“I always wanted to be a doctor, but I grew up poor and female. I never thought I could do it. With some encouragement from a physician while I was in the Air Force, I put on my big girl pants and worked my way through college.”

“I worked full time and went to night school. Four years later, I graduated from the University of Pittsburgh with a B.S. degree in Chemistry and a second lieutenant’s commission in the Air Force Reserve. I went to med school for four years at Philadelphia Osteopathic Hospital and then spent a four year in residency at a hospital in Allentown, Pennsylvania.

“While I was doing my residency, I was invited to become a flight surgeon. I spent four additional months learning how to take care of pilots and air crews,” Vass said. “For the next 16 years I served in the Air Force Reserve and saw the world.

“My reserve unit was based in Pittsburgh and flew out of Pittsburgh International Airport. I worked for a tanker unit. We passed fuel to fighter planes in Iraq in our C-135 tankers. My job was to take care of the tanker crew both in the air and on the ground.

“One time we flew out of Turkey over Iraq during Operation Desert Storm and refueled four fighters in the war zone at night. It was the quietest mission I ever flew on.

“We took some small arms enemy fire in the tanker’s tail early in the mission, but it wasn’t serious. We got back to base unscathed.

She found pilots, in particular, quirky to work with. “To give pilots shots you had to chase them around the base because they wouldn’t come into the clinic and get their shots,” Vass said. “I would have to lie them down to give them shots because they would pass out.”

While in the Air Force Reserve Vass treats a child in Peru on a humanitarian mission during her 16 years in the Reserves. She retired as a lieutenant colonel. Photo provided

When she wasn’t treating pilots she was part of a humanitarian Air Force Reserve effort to fly around the world and treat needy individuals in struggling countries. She’s treated civilians in Honduras, Peru and several countries in Africa.

“We flew into a country and provided the locals with eye glasses, pulled teeth, and immunize them,” Vass said.

After 16 years in the Air Force Reserve she retired as a flight surgeon and lieutenant colonel.

Then she worked for a few years in the emergency room of a hospital in Allentown. Twelve years ago she moved to Venice and went to work in the ER at Venice (FL)Hospital.

Why the emergency room?

“I like the variety of the challenge in the ER. You’re working on a sprained ankle one second and the next you’re treating someone with a heart attack.”

Vass appreciated her time in the Air Force Reserve.

“It was the best career,” she said. “I worked with the best troops, I’ve been everywhere. It was wonderful.”

This story was first published in the Charlotte Sun newspaper, Port Charlotte, Fla. on Monday, July 8, 2019, and is republished with permission.