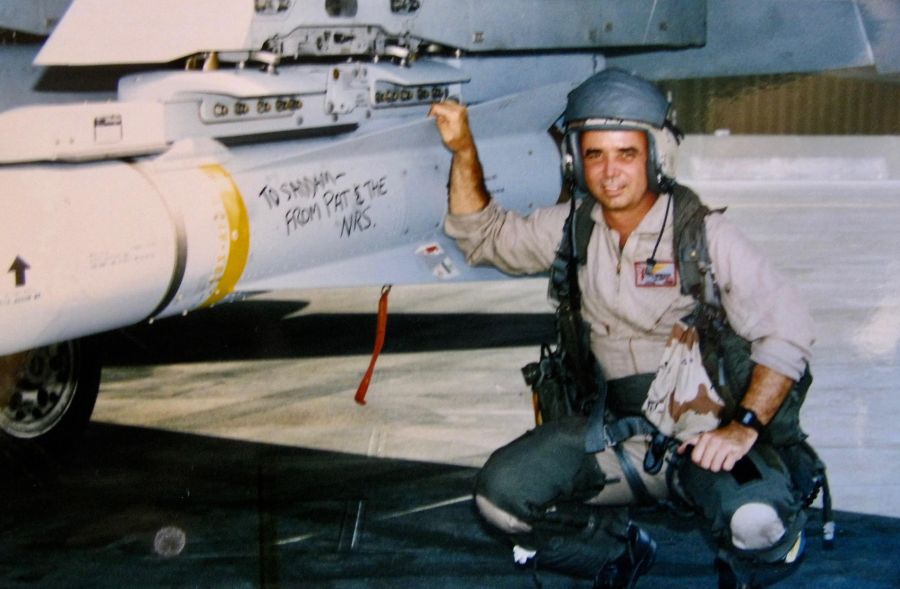 Lt. Victor Simpson squats beside his F-18 during Operation Desert Storm in 1990. His Marine squadron few a number of combat missions during that conflict. Photo provided

After graduating from the University of New Mexico retired Col. Victor Simpson,
who now lives in Punta Gorda Isles subdivision, went into the Marine Corps in
1969. He followed in the footsteps of his father who served in the Corps during
World War II and the Korean War that followed.

He got in just in time to be shipped on Vietnam during the closing weeks of that ill-fated conflict.

“I was stationed in Thailand and we were flying sorties into Cambodia in our F-4 ‘Phantom’jet fighters. They were still fighting and we were bombing enemy
artillery and tanks,” Simpson recalled recently. “There was very little shooting at our planes. We would fly in and drop our 500-pound bombs at 1,500 feet and fly out.

As soon as we dropped our bombs we’d fly high because most of their defense was small arms fire. Generally four of our planes would attack a target.”

A few weeks later Simpson’s squadron flew from Thailand to Okinawa and Naha Air Base there. He made it back to the states in 1974 and became a flight instructor at a base in Mississippi.

Retired Marine Corps Col. Victor Simpson of Punta Gorda Isles looks as a picture of an F-4 “Phantom” flying from the deck of the carrier Coral Sea similar to the one he flew off the same carrier. The picture is called “Thunder on the deck.” Sun photo by Don Moore

After serving as an instructor pilot Simpson was transferred to El Toro, Calif. and the Marine airbase there. It was at this point his squadron got updated F-4s that made them capable of landing on a small carrier’s deck.

“Myself and my RIO in the back seat, Jim Ardaiolo, were flying just another night flight by VMFA-531 off the carrier Coral Sea in the Indian Ocean during a cruise we took in 1979-80

“The routine for the F-4N CAT Shot is full afterburners with full back stick. The shot is designed to give the aircraft about 10 knots airspeed above minimum flying speed for the aircraft weight at launch.

“As I went through the routine of moving the stick slightly forward to establish climb attitude I felt the nose of the plane continue to go up. At that point I slowly fed in some left rudder which brought the nose down enough to establish a routine climb and power us out of a stall.

“After we returned from our mission the CAT office was waiting for us in the ready room. He apologized and said just as our launch was made he noticed a drop in catapult launch pressure which reduced our minimum flying speed by 10 percent. It was the brute force of the J-79 engines in the F-4 that made it the great plane it was. It was this force that kept a positive rate of climb during an approaching stall condition and powered us out of what could have been a disastrous ending.”

It wasn’t until the Iran Hostage Crisis in 1980 that Simpson switched airplanes. He went from the F-4 “Phantom” to an F-18. “Hornet.”

Recalling the switch in planes, he said, “The F-18 had improved avionics.

Col. Victor Simpson who retired to Punta Gorda Isles subdivision was a Marine Corps aviator who took part in the “Iran Hostage Crisis” in 1979.

“We were out there to fly cover for the helicopters that were going to rescue our hostages,” he said. “I was number one on the flight deck ready to take off when our mission was called off.” The rescue mission suffered engine trouble with their helicopters in the desert which resulted in several of the rescue planes colliding before they reached the 60 American hostages and the whole mission was scrapped.“

“I was on the first mission of the Gulf War. On this initial flight we were going after their air defense,” he explained. “We started off bombing Kuwait at night with lots of airplanes. We took out their missiles and RADAR. They fired tons of missiles at us.”

Saddam Hussein, the president of Iraq, invaded Kuwait in August 1990. The UN Security Council became involved and ordered Hussein to withdraw his forces from his tiny neighbor. When he refused to leave the country with his troops the U.S. and a number of other countries in the UN went to war with Hussein.

By then Simpson was flying an F-18 “Hornet.”

“The bombing restrictions were much different then when he flew bombing missions in Vietnam. In Operation Desert Storm they told us to go fight the war.

Simpson stands in front of a bombed out hanger in Kuwait that at one time housed Iranian MIG fighters. The hanger was at the Al Jaben Air Base in Kuwait. Photo provided

“Once the ground war started our job with the Marines was close air support. We flew down low to support our troops and took out enemy artillery and tanks. We had a lot of triple-A coming our way. We were lucky because our group never lost an airplane. Two of our planes were hit by enemy fire.”

Late in his career Simpson was commander of an air group based in Willow Grove, Pa. He had five squadrons in the group.

He ended his military career in the Pentagon as Director of Space Systems. As a civilian he spent the next 18 years in Colorado working for civilian space contractors until he and his wife Susan moved to Punta Gorda recently. The Simpsons have two children: Craig and Brooke.

This story was first published in the Charlotte Sun newspaper, Port Charlotte, Fla. on Monday, May 17 & 24, 2019, and is republished with permission.