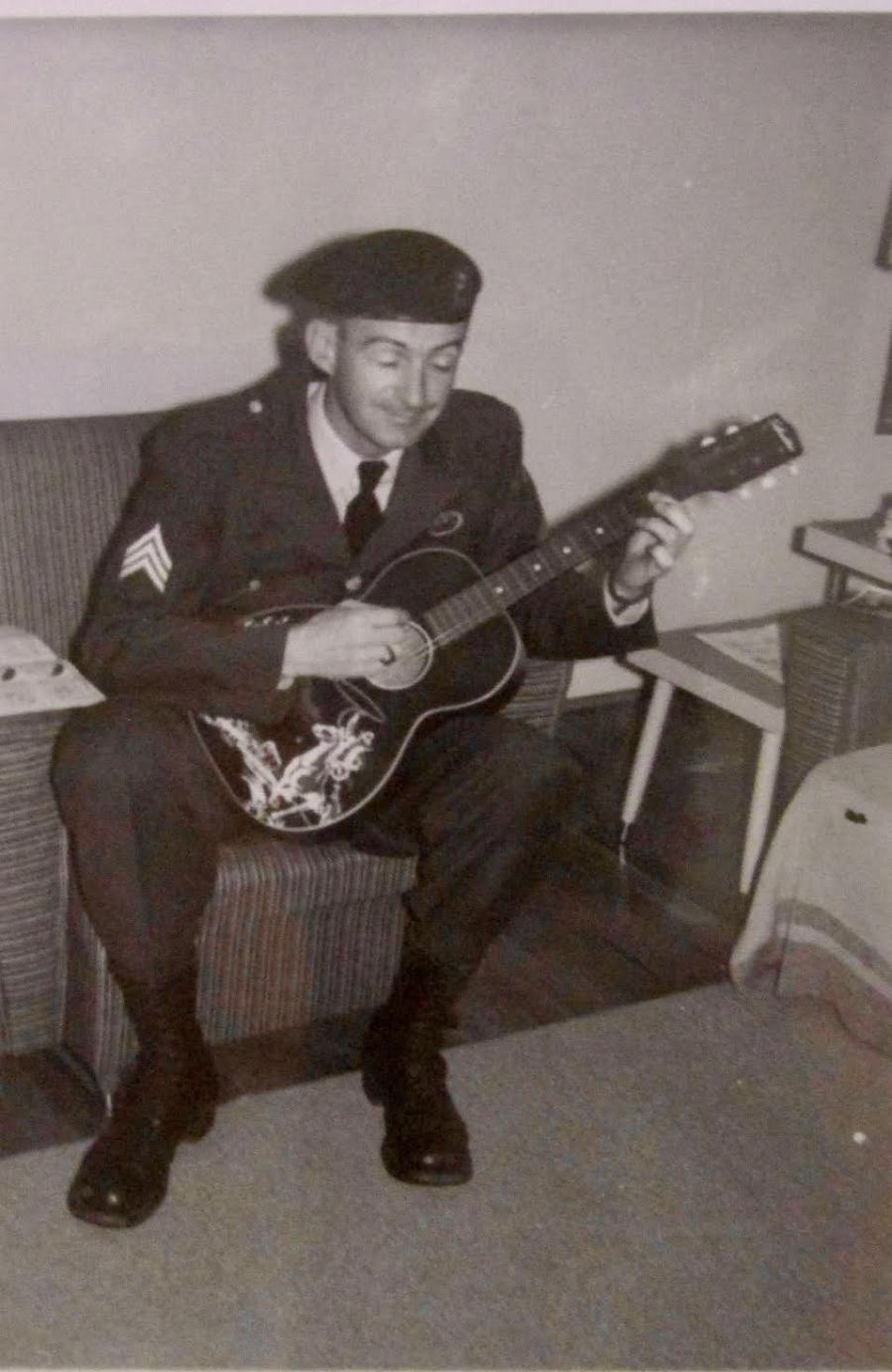 Sgt. John Fanning was home on leave in the 1950s from the 13th Ranger Company. He tries his hand and the guitar. He spent 17 years in the Army, much of it during four tours in Vietnam with Special Forces. Photo provided

In May 1950 John Fanning of Warm Mineral Springs joined the Connecticut National Guard because it was where the socially-connected met to party. A month later, in June, the 21-year-old Army recruit learned his Guard unit provided more than good times. He marched off to war in Southeast Asia when his outfit was federalized shortly after North Korea went into South Korea.

“I ended up in the 13th Ranger Company, part of the 43rd Division, that was sent to Germany,” the 87-year-old former soldier explained. Eventually we came home and got discharged and that was that.

“I was sitting in a bar having a beer with some friends. We began talking about the good times we had had in the service,” Fanning said. “I decided to go down and re-enlist in Special Forces with the Green Berets. I became a member of an A-Team sent to Laos on temporary duty.

“While I was there a chopper came in and this guy got off. His name was Robin Moore who wrote the book, ‘The Green Berets.’ He was out there researching another book. We took him on an operation with us.

“I was a buck sergeant in the 7th Special Forces Group Airborne. We were part of ‘Operation White Star,’ in Laos, he explained. Our particular mission was to help train the Laotion Army. That was the first time I came under enemy fire.

“Our position in Laos was close to a North Vietnamese Regular unit. They woke me up in the middle of the day with their cannon fire. One of their shells exploded close to where I was sleeping,” he said. “Before we could accomplish much over there the government pulled us out after several months and sent us back to Fort Bragg in the States.

“I transferred to the 1st Special Forces Unit based in Okinawa. I made a couple of temporary duty trips to Vietnam with them.

“On one of those trips I helped train Montagnards (the indigenous people) who were living in Ba Don, a little town in South Vietnam. These people were called Mung Lao and were Laotians. Since I could speak a little Laotian from my earlier trip to Vietnam I became like a big brother to them. I loved them.”

“This part of South Vietnam was a heavily forested area without many roads. There were lots of forest trails to travel on.

“The Montagnards used elephants as pack animals. Each elephant could carry about 500 pounds in a pouch on its back. If you put too much cargo on an elephant he would shake it off,” Fanning explained. “The elephants and their native handlers were lifetime partners. They took care of them and treated them well.

“On one patrol into the jungle I was walking in front of an elephant in the bush. You could hardly hearit because he stepped so quietly,” he said. “Because I wasn’t walking fast enough the elephant gave me a push with his trunk. The boy who was his handler who was riding on his neck laughed.

“Our job was to train these Montagnards how to use American-made military equipment—M-1 rifles, 60 mm mortars, and bazookas. Sometimes they went out with us on an operation.

“At that point they were mostly fighting the Vietcong, the guerrillas. They didn’t have too many Vietnamese Regulars yet, but they were on their way to South Vietnam. After six months I returned to Okinawa with my unit.

Then I was sent to the Delta way down in South Vietnam. It must have been around 1964 by this time. Our mission was to train a Vietnamese Army unit how to protect the country’s border, along the Mekong Delta between South Vietnam and Cambodia.

“While I was there in the Delta, Raymond Burr, the actor, came visiting. One of our guys had a pet snake he put up in our barrack rafters to have a little fun with th actor. ‘By the way, Mr. Burr, if you look up you’ll see my pet snake over your head1’

“Burr looked up, saw the snake and didn’t say a word.

“We had no enemy contact while I was there and I was getting disgusted with the Special Forces Unit. I thought the Special Forces would be like the Office of Strategic Services, The OSS, that went behind enemy lines in World War II and created a guerrilla force that attacked the enemy. I didn’t like the way Washington was fighting the war in Vietnam. When my time was up a few months later I got out of the Army.

“I spent a few months back in the U.S., but I couldn’t find a decent job so I re-upped in the Army again. I was assigned to a unit in Germany. For a single guy Germany wasn’t the place. There was too much booze. I was not doing well. I volunteered to go back to Vietnam.

“I was sent to the 1st Air Cavalry Division based in the biggest heliport in the world at Ah Khe. I was assigned to the 1st Brigade as the S-5. It was my job to win the hearts and minds of the locals. That was a lovely assignment. I loved it.

“The major in charge of our group was also in charge of the officers’ club. He found out I had been a bartender earlier in life and when the working bartender was reassigned I became his replacement,” Fanning said. “It was only supposed to be a temporary job, but when I asked about reassignment I was told, ’The colonel likes your martinis. And by the way, the next stripe that comes in is going to you.’

“There were guys out there in the bushes getting shot at, and they were going to give me the stripe for being a bartender. I didn’t like that,” he said. “I talked them into giving me travel time to go to Okinawa for 10 days to buy bar stools. I returned 28 days later and they court-martialed me. They took my stripes and sent me back to a line company in Vietnam as a corporal.

I was like a cartoon from Joel Chandler Harris, “Please Brother Bear, don’t throw me into the briar patch.” That was exactly where I wanted to be—in Vietnam on the front line again.

“I was sent to Charlie Company, 1st of the 12th Cav. We had the usual field operations and some enemy contact. Nothing too serious. Then the division commander put me in a special training team again. We were training the regional forces in Vietnam—like our National Guard. We were working out of Qui Nhon.

It was there he was introduced to Charlton Heston. The actor was making the rounds in Vietnam.

“There was a B-Team of Special Forces next to our compound. I was often over there drinking beer with them,” he said. I was sitting at the bar having a beer when this lieutenant colonel in a nurses uniform sits beside me. I looked at her and realized it was the comedian and actress Martha Raye.

“‘Call me Maggie honey,‘ she told me. I had a big conversation with her at the bar. She was a sweetheart.”

Raye had been an Army nurse in World War II.

“I went to the sergeant-major and told him I was looking for a cushy assignment. I became the sergeant at the 3rd Field Hospital in Saigon that checked in patients and reported their whereabouts back to their company in the field. That was about as far away from war as you could get over there.

“One day I’m sitting there waiting for more casualties to arrive at the hospital and an officer came up and asked me to escort a visitor around the hospital to visit the wounded troops. It was Gypsy Rose Lee, the burlesque queen from back in the states. She was in her 60s at the time but she was still a beautiful woman.

“I finally had enough working at the Saigon hospital. I’d heard about an operation the CIA was running. I went to the CIA’s office in Saigon and got a job working for a Provincial Recon Unit at Bal Loc. When I arrived there was a 36-man team we split in two. I took 18 of these men into the jungle with me.

“We set up in a place where we thought we could capture the North Vietnamese tax collector making his rounds. The VC would hold a gun to a farm’s head and say: ‘Give me all your money, we’re collecting taxes!’

“About this time Gen. Creighton Abrams sent this bird colonel around to inspect all the Provincial Recognizance Units. I talked to the colonel and told him I had four years in country with various units and was a valuable asset. The colonel told me, ‘Sergeant it’s time for you to go back to the states. That’s an order!’

“I was sent back to B-Company, 75h Rangers at Fort Carson, Colo. I cut a deal with the company commander. If I would train some of the people how to send Morris Code he would sign a 1049 order sending me back to Vietnam.

“In 1970 I went back there to the 101st Airborne. While I was there my mother passed away. I came home on emergency leave for her funeral. About that time President Nixon approved an order that nobody was going back to Vietnam.

“When it came time for me to reenlist in 1972 I decided to call it quits after 17 years in the Army. There was nothing interesting to do because the war was almost over.

“People couldn’t understand why I would get out three years short of my 20 year retirement date. I didn’t get in the Army to draw retirement. I joined to fight.”

Fanning went to work in civilian life for McGraw-Hill, the book publishing company. He stayed with them for 20 years until he got a better offer from Lockheed, the airplane manufacturer. For the next three years he worked for them until he retired for good.

Fanning and his wife, Billie, moved to Warm Mineral Springs in 1991. They have three daughters: Lee, Connie and Sandra. 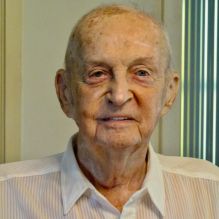 This story was first published in the Charlotte Sun newspaper, Port Charlotte, Fla. on Monday, March 5, 2018 and is republished with permission.

Click here to view Fanning’s collection in the Library of Congress.

John V. “Jack” Fanning, 87, of North Port, Florida, passed away on Saturday, April 1, 2017 at Tidewell Hospice in Port Charlotte, Florida. He was born in 1929 in Baltimore, Maryland, to Edward W. Fanning Jr. and Alice “Kelly” Fanning.

Jack served in the U.S.Army for 17 years. He served as an Airborne Ranger and as a Green Beret. He saw action during the Korean War and did four tours in Vietnam and Laos. After leaving the military, Jack worked for McGraw Hill Publishers and Lockheed Martin in California. His great love was music, in particular, Dixieland Jazz. As a child, Jack played both piano and drums, so it was appropriate for him to learn to play the vibraphone as an adult.

He was the first president and co-founder in 1974 of the Monterey Bay Hot Jazz Society in Monterey, California. He moved to North Port, Florida in 1991 and worked as Dick Hyman’s studio manager. Jack played many gigs in the area with numerous musicians and with his wife, Billie, as “Shadows.”

He is also survived by his sister, Alice Kennedy of Waterbury, Connecticut; and his brother, Barry Fanning of Alturas, California; as well as numerous nieces and nephews.

A memorial service will be held at a later date. In lieu of flowers, contributions may be made to a favorite charity.