Pvt. Joe Battaglia was learning how to be a soldier when this picture was taken at Fort Gordon, Ga. in 1952. He saw front line action in Korea along the DMZ during the war. Photo provided

Shortly after Joe Battaglia was drafted into the Army in November 1951, he found himself in a bunker a few hundred feet behind the “Main Line of Resistance,” the front line, along the 38th Parallel separating North and South where the fighting was taking place during the Korean War.

“My job description was 1648, Radio Repairman, but I never repaired a radio,” the 86-year-old Port Charlotte man, who lives in Essex House apartments, recalled a lifetime later. After basic at Fort Dix, N.J. and Signal School at Fort Monmouth, N.J. Battaglia took a slow boat from Washington State to Honolulu, Japan, and finally Inchon, Korea.

“I joined the 8189 Signal Service Battalion headquartered in Seoul, South Korea. When a ground unit requested an air strike our job was to notify the Air Force or the Navy. They would tell us when they would be over the target and what kind of planes they’d be flying. We’d relay this information to the people on the ground who requested the strike.”

Battaglia’s job was basic and pretty boring except when they were being over-run by thousands of North Korean and Chinese soldiers. Then it was a life or death situation.

His communication bunker was on a nondescript hill over looking an American artillery unit down below. They were attached to the 6th South Korean Division and were more or less by themselves.

“When the Chinese broke through our front lines we had to make a run for it,” he said. “I was with my radio unit at the time up by the 38th Parallel. My shift was over and I walked out of the bunker where I was and nobody was there.

“The artillery unit was gone and the South Korean infantry was gone. Nobody had bothered to inform us what was happening.”

“I told my sergeant we had better take our deuce-and-a-half truck and mobile generator and head south as quick as possible,” Battaglia recalled. “As we drove south we transmitted voice communications back to our battalion headquarters telling them what the heck was going on with us.

“By this time the whole damn North Korean Army backed up by the Chinese were coming over the line and headed our way. We had to keep falling back until the weather cleared and our Air Force stopped their advance.

“One of our units was captured by the Chinese. A British outfit rescued them. 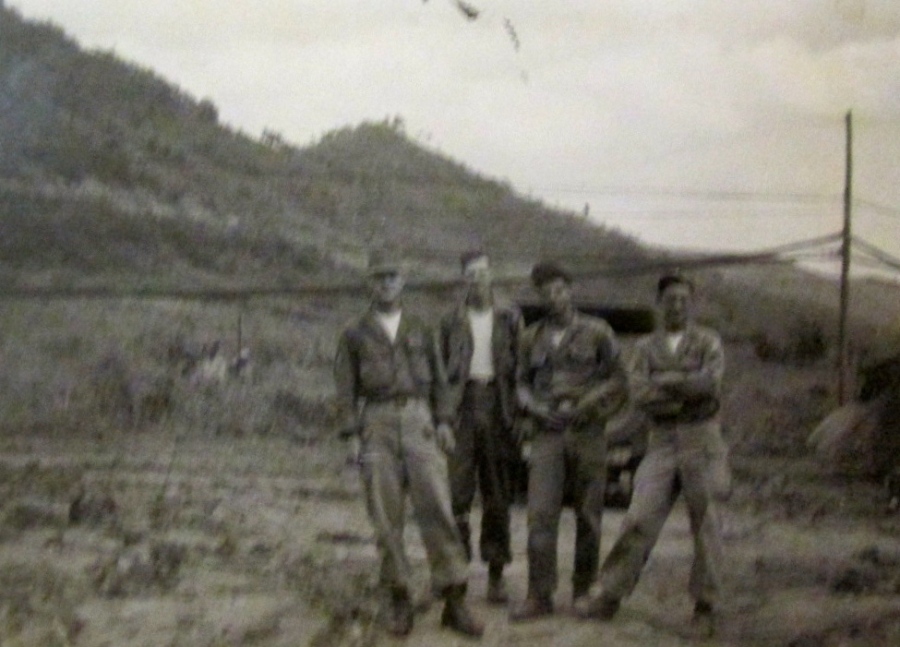 Joe and his three buddies in Korea in 1953. From the left: Coble, Smithy, Joe, and Heand. Photo provided.

“We were told to take the laces off our combat boots and throw them away. Because what the Chinese would do when they captured people, they would tie their hands behind their back with their boot laces and shoot them in the head.

“One time we captured an enemy soldier and they turned him over to the South Korean Army. A South Korean officers came out of his bunker and took the North Korean POW. Then the officer ran his finger across his throat. That’s what the South Koreans did to the POW. I turned around and walked away. I was right there and saw the whole thing.

“I remember we had a duece-and-a-half with a .50 caliber machine-gun mounted on a ring above the cab. The truck would be used on convoys for protection from enemy snipers. When they would get sniped at the guy with the.50-cal. would open up on the snipers and that was the end of that.

“Another problem we had, we’d be coming down a road approaching a group of civilian refugees. We didn’t know if there were enemy soldiers walking with them or not. Unfortunately a lot of civilians got killed.

“I was on duty up there along the 38th Parallel and I heard this bang, bang, bang. Then the whole ridge we were on shook,” Battaglia said. “Everything was shaking, so I ran outside and looked down the hill. The artillery unit below us was gone. Our planes hit them with friendly fire.

“We were on a mountain top and it was a foggy. The guys in the planes didn’t know where they were bombing. A lot of artillery guys lost their lives down there.

“After I almost got bombed by friendly fire from our own jets, when I came home from Korea I’d get chills up my spine sometimes when I heard jets flying over. I was having flashbacks.”

After that incident, the accidental bombing by friendly jets along the DMZ, Battaglia was transferred to a communication compound near K-47, a U.S. airfield further south in Korea.

“I was down at battalion headquarters drinking coffee one night in the mess hall. It was dark and cold. We heard some shots go off and we all ran outside to see what happened. A cow had gotten tangled up in the perimeter barbed wire around our compound and the sentry shot it. They had to pay the farmer who owned the cow reparations for his animal.

“Another thing most people don’t know. When we needed a part for our radio, we’d call headquarters. A little two-seater plane would fly over and drop the part to us in a parachute.”

When the Korean War ended in July 1953, Pfc. Battaglia was still working in the communication compound near K-47.

“It was late October when I got on the ship at Inchon and headed home. I was discharged from the Army on Nov. 21, 1953.”

What happened to this returning soldier when he returned home?”

“Nothing. Nobody paid much attention to me even though I was wearing my uniform and carrying a duffle bag on the subway. There were no parades for us. It was like the war never happened as far as the civilians were concerned.

“I took the G.I. Bill and went to radio school. Then I went to work for a company in Hoboken, N.J. that tested military equipment. After that I went back to New York and worked for a firm that made computers for the Trident atomic submarine. Finally I worked for Raytheon Corp. that had a division on Long Island. I stayed there until 1988 when my wife, Karen, and I decided to retire and move to Port Charlotte.

Battaglia has two daughters up north, Diane and Susan, and a bunch of grandkids.

This story was first published in the Charlotte Sun newspaper, Port Charlotte, Fla. on Monday, Jan. 29, 2018 and is republished with permission.