David Cheney was on leave at his parents' home in New London, Conn. in 1960 shortly after getting out of boot camp at Fort Dix, N.J. Photo provided

The scariest part of David Cheney’s three years in the Army was during the “Cuban Missile Crisis” in 1962. He was attached to a communication’s outfit stationed in Panama and was within hours of being shipped to Cuba to take part in an invasion by U.S. forces.

During 13 days in October, from the 16th through the 28th, 1962 the United States, Soviet Union and the Cubans were on the brink of nuclear war. It started when an American U-2 spy plane photographed Russian medium range (SS-4 Missiles) being installed in Cuba.

A year earlier President John F. Kennedy cooked up the ill-fated “Bay of Pigs” invasion of Cuba by dissidents backed by the Central Intelligence Agency. The invaders were to overthrow Fidel Castro, the Cuban strongman, who had just run Rafael Batista, the Cuban dictator, out of the country. Halfway through the invasion Kennedy pulled the plug and the landing became a disaster for a bunch of patriotic Cuba invaders who were captured by Castro’s Communist troops.

As a result of the “Bay of Pigs” debacle, Castro convinced Soviet Premier Nikita Khrushchev to provide economic support for the island nation. In addition to economic goods for Cuba, Khrushchev also snuck several shiploads of Russian missiles into Cuba. They were eventually aimed at the U.S. mainland when discovered by the American spy plane.

Initially the Soviets denied the U.S. charge that it had nuclear missiles pointed at the U.S. Tension between Kennedy and Khrushchev almost reached the breaking point when Adlai Stevenson, the U.S. ambassador to the United Nations, produced aerial photographs of the offending missiles in Cuba.

The world was waiting for catastrophe to strike. Then Khrushchev blinked. He sent a secret letter to Kennedy telling him he would remove the Soviet missiles in Cuba if the U.S. would remove its nuclear missiles in Poland pointed at Russia.

While all these international discussions between the two world leaders were going on Pfc. David Cheney of North Port, Fla., a member of the 3rd Signal Corps Platoon in the Panama Canal Zone, was waiting orders to march into Cuba.

“About 600 of us were stationed at Fort Kobe in Panama when the problems in Cuba broke out,” the 76-year-old former soldier recalled. “We were put on high alert. We thought we were about to be shipped to Cuba as part of the assault troops. We were issued live ammo and everything else and were ready to go.

“If I had gone to Cuba it would have been my job to establish communications facilities for Army troops who were expected to land with me,” Cheney said.

“We sat there for six days waiting to go. We were right there at the Canal Zone watching at least 30 American war ships sail through headed for Cuba.

“It was pretty scary because we didn’t know anything. Despite the lack of official communication word got around to us about what was happening with the Cuban crisis. Then we finally got word the conflict was over.”

This was British Honduras after a hurricane wiped out the country in the early 1960s. Cheney was sent to the country to help establish radio communications with the outside world after the storm. Photo provided

Some months before the Cuban problem erupted, “A hurricane wiped out British Honduras. Eight or nine of us from our company were sent to Honduras to help provide communications for the rescue and recovery operation,” he recalled.

“I flew down with the group and set up generators to supply communications. We were up and running the first night we arrived. For the next 14 days we supplied the radio communications for the recovery group.”

Pfc. Cheney works on a generator during his time in the Panama Canal Zone while serving in the U.S. Army in the early 1960s. Photo provided

When Cheney returned to Panama he was transferred to a new unit—the 134th Ordinance Battalion. It was a Hawk Missile outfit that maintained and fired the air-to-ground missile. He had been asking for a transfer out of his old unit because of lack of promotion. He was still a private first class after a couple of years in the service.

He never fired the missile while a member of his new battalion.

“It was probably a good thing,” Cheney observed more than 60 years later. “I understand some of the test firings didn’t go too well.”

He wrapped up his three years with the missile outfit and was shipped back to the States for discharge. Right after Christmas 1963 he was discharged from the Army at Fort Jackson, S.C.

A short while later Cheney went to work for McDonalds. He flipped hamburgers to begin with, but after 18 years with the firm he was director of operations for a McDonalds franchise in the Enfield, Conn. area.

He bought his own mom and pop restaurant in Westfield, Mass. he ran for a few years, sold it then signed on with a doughnut franchise and opened 24 stores for the chain before becoming a food service consultant in 1990. He spent the last 13 years owning another restaurant in Enfield, Conn.

He and his partner, Sheryl, moved to their North Port home two years ago. Cheney has five children from an earlier marriage: Ann, Art, Sheryl, Patrick and Dianne. 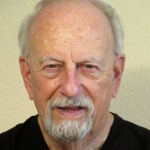 This story was first published in the Charlotte Sun newspaper, Port Charlotte, Fla. on Monday, Dec. 19, 2016  and is republished with permission.

Click here to view Cheney’s collection in alphabetical order in the Library of Congress.