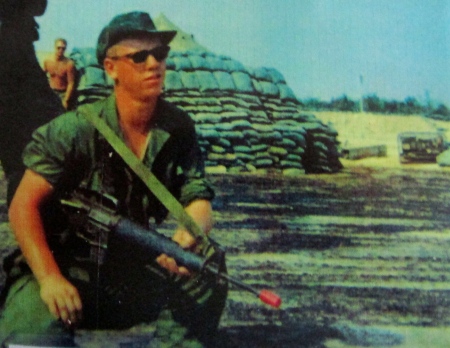 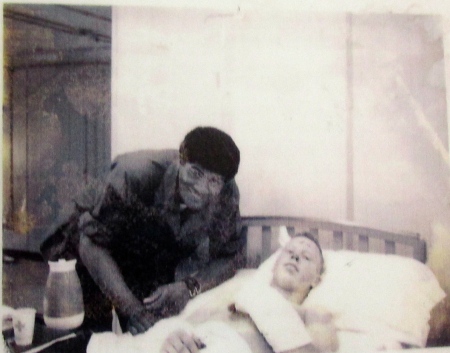 Sp-4 Robert Weatherhead holds his M-16 assault rifle at Patrol Base Diamond III southwest of Tay Ninh City hours before his 25th Infantry Division was attacked by three battalions of North Vietnamese Army regulars on April 15, 1969. Fifteen Americans died in the firefight. Photo providedWeathered is shown recovering from his war wounds in an Air Force hospital in Japan. He lost his right leg to an enemy mine. Photo provided

Minutes before Spc.-4 Robert Weatherhead was to fly out of the Vietnam jungle in 1969 at the end of his tour with the 25th Infantry Division, he and his buddies got in a firefight with a couple of North Vietnam Army regulars. Then he stepped on an enemy mine and lost his right leg.

“I was a ground pounder in Delta Company, 2nd Battalion, 27th Regiment of the 25th Infantry Division,” the former soldier said about his Vietnam tour more than 45 years ago. “We called ourselves ‘The Wolfhounds.’”

Weatherhead was drafted a couple of years out of high school and went to Fort Jackson, S.C. for basic training in 1968. After basic and advanced infantry training he climbed aboard a plane and flew from California to Long Bien, Vietnam.

“When I first got there I went to Jungle Warfare Training for a few days,” he explained. “Then I was sent to Cu Chi, base camp for the 25th Division.

I was at the base camp a few days, before I was sent out on my first Long Range Reconnaissance Patrol. I was almost never at Cu Chi, I was almost always was in the field on patrol. It was our job, for about 20 of us, to look for trouble, but stay out of it. Usually by the time you found it you were in the thick of it.

“When we went out on one of these patrols we had two guys with M-60 machine-guns. In addition, several other guys had M-79 grenade launchers. I was a guy with an M-16 rifle who walked flank much of the time. Everyone had their turn as point man.

“Most of the time we were involved in fighting NVA soldiers. They were very good soldiers—well trained and organized. They also had good weapons the AK-47 rifle they carried,” he said. “Sometimes the NVA would hit us at night when we were back in our parameter. Other times they would attack us in the jungle for a minute or two and vanish after a quick firefight.

“I was involved in two ground attacks called: ‘Diamond-1.” and ‘Diamond-2.’ We were walking around out there in the jungle and we walked into an enemy trap. The fighting might have gone on for 30 minutes or more. It was quite something.”

The engagement that made the biggest life-changing moment on Weatherhead was the firefight he was in shortly before he was scheduled to return to base camp. He wae to fly home because he completed his tour in Vietnam.

“When I got wounded and lost my leg we had been out in the field for 10 or 15 days looking for the enemy. We were getting ready to be picked up by a flight of Hueys. My buddy and I were sitting there waiting for the choppers when all of a sudden shooting started. A couple of NVA guys were shooting at us with their AK-47s.

“I took a couple of steps and stepped on a land mine. I went straight up in the air from what the guys told me. The hole the mine made when it blew up made a foxhole for me that I landed back in after the blast,” he said. “I was able to retrieve my rifle that was nearby and started shooting at the NVA guys.

“At first I didn’t know my leg was gone. When I got a moment, when the shooting died down, I looked over myself, it was then I realized half of my right pants leg was gone and so was my leg,” Weatherhead recalled. “I took my rifle sling and wrapped it around what was left of my leg. Most of the blood was coming from both of my wrists that were slit from the blast. I was bleeding all over the place. It wasn’t a real good moment.

“The Hueys were starting to come in and the door gunners in the choppers were laying down a lot of small arms fire. The chopper pilot who saved me I would love to meet. I’ve tried to find him over the years with no luck. He didn’t have to come in and pick me up if he came under fire, but he did. His first priority is the safety of his crew and chopper.

“They flew me to a hospital facility at Cu Chi. They told me to stay awake. I remembered during jungle warfare training that I took, if you don’t stay awake you can go into shock. A lot of soldiers die from shock not from their wounds,” he explained. “I remember for some reason I kept yelling and screaming while they were working on me.

“They patched me up and sent me to another hospital in Saigon. I spent a few weeks there until I was able to travel. Then I was sent to Japan where I spent two or three more weeks recovering. I went down from 160 pounds to 129 pounds during this period.

“I ended up stateside at a hospital in Fort Devens, Mass. It was an old World War I hospital. I was there three or four more months until I was transferred to a VA hospital in Boston. I was there six or eight months and it was in Boston I was fitted with a prosthetic leg. The rest is history.”

After attending electronics school thanks to the G.I. Bill and working for a number of companies repairing computers he went to work for several start-up firms.

A picture of a Purple Heart medal adorns the bottom of his prosthetic leg. He lost his leg while fighting in Vietnam in the 1960s with the 25th Infantry Division. Sun photo by Don Moore

“I did very well for myself. During my last 15 years in business I worked for the Department of Veterans’ Affairs. I worked for them until I retired in 2003,” Weatherhead said. “I worked in their I.T. Department.”

He and his wife, Dorothy, moved to Florida during the winter a few years later. He is active in local veteran groups. They have two children: Dawn Marie and Dean. 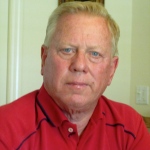 This story was first published in the Charlotte Sun newspaper, Port Charlotte, Fla. on Monday, June 20, 2016 and is republished with permission.

Click here to view Weatherhead’s collections in alphabetical order in the Library of Congress.