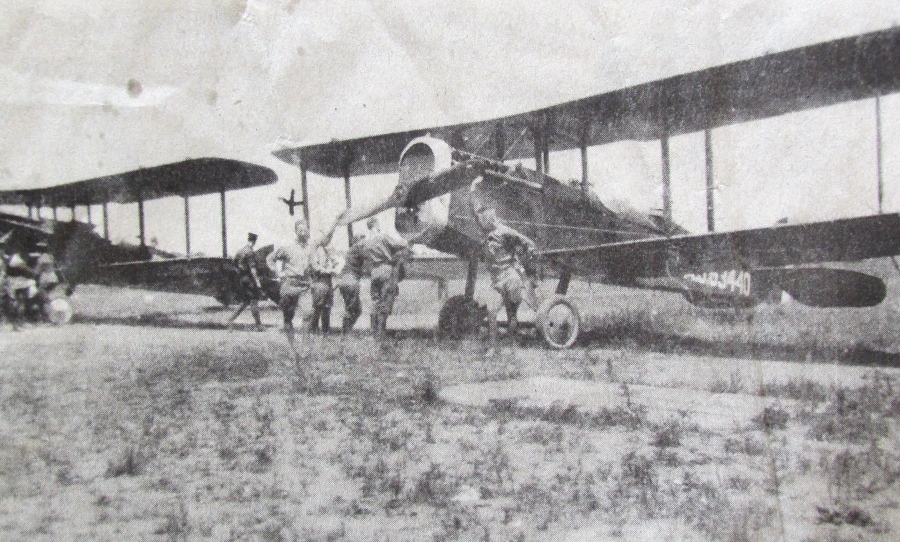 Student aviators get ready to take to the air in their Curtiss JN-4 Jenny two-seater bi-planes at Carlstrom Field in 1918 near Arcadia, Fla. It was one of the few communities in Florida that had two Army airfields in World War I. Photo courtesy of Historian U.S .Cleveland, Punta Gorda, Fla.

I was recently given copies of 14 letters from a young flying cadet named “Clarence” taking “Pursuit Training” at Carlstrom Field, just south of Arcadia, Fla. in the fall of 1918. He sent the letters to his mother.

DeSoto County historian Howard Melton let me read them. The letters are interesting and talk a little bit about life in these parts nearly a century ago.

In those days Arcadia was known as “The Aviation Capital of Florida.” It had two Army airfields — Carlstrom, eight miles south of town, and Dorr Field, 10 miles east of town — something almost no other community in the state could boast.

Clarence’s first letter home is dated Oct. 10, 1918, almost a month to the day before Armistice Day and the end of World War I.

“Well I’m here; got here Tuesday afternoon after several attempts. I guess from the general layer of water covering the land here, they have had considerable rain ….

“As soon as we got in camp we were put in detention for eight days. They have very few cases of the flu here and are trying hard to keep up their record. The whole camp is under quarantine.

“I will be taking up my regular work this next Monday. Will fly a half day and go to class a half day. This is a two months ‘Pursuit Course,’ one month here at Carlstrom Field and another at Dorr Field — near here.

“I guess the war will be over before I have completed my training! Just my luck — darn it!”

Clarence talks about how terrible the mosquitoes are, particularly at night while living in tents under quarantine that first week. He also mentions the lousy chow, not at all like mother’s cooking.

“Another week has rolled by and with it the completion of the first week of the primary acrobatic stage of my pursuit training. This work was very interesting, though difficult at times. One stunt, a vertical reverse, almost cost me another week of it. Everyone has trouble with them and I had plenty of mine.

“I’m flying on my second week of work now. I was up with two other fellows and an instructor to fly formation this afternoon and acted as leader. However, before I could get them into shape or position a typical Florida storm came up and I had a time getting into the field.

“I am going into ‘Voice Control’ stage next week. There, we fly formation in fast ships and an instructor flies alongside the formation and tells us what to do.

“Did I tell you that through a ‘ball-up’ I was sent back to ‘Primary Acrobatic Stage?’ Well I was sent back last Tuesday and spent another week there. Anyhow, I got some good grades and some good flying. I got so I could do stunts with either hand and almost with my eyes closed, so to speak.

“I almost roasted out on the machine gun range this afternoon. We sat in the sun all afternoon with the thermometer at about 200 in the shade!

“I seem to be getting along very well in my formation flying. I guess I will never see France. I’m beginning to get reconciled to it somewhat now! It’s a known fact that we will be made instructors for about six weeks after we complete our course. That means about February.

“At last the quarantine for the flu has been lifted and we are allowed to go as far from camp as Arcadia. I went into town last evening. They have one lonely picture show in town. It has one very distinctive feature, the picture will suddenly cease to be and in its place is flashed a notice that an Atlantic Coast Line train is pulling into the station. The lights come on and all the town folks be-take themselves to the depot. When the train leaves, they come back to the theater and the show continues.

“Arcadia is a mighty nice place for its size. It has paved streets and everything.

“I don’t know how I did it, but I got through ‘Primary Scout’ stage last weekend and am now flying on the scout patrol formation. We fly around over assigned sectors in formations of five ships for almost two hours. When we get back we have to make a sketch of the territory covered and do a written report of any ships we saw on our trip or anything of importance. It is rather interesting work, though tedious.

“I have two or three more weeks here before completing the pursuit course. Next I go into the combat stage. On that stage you get your fighter practice. You and the instructor go up and have at it in the air.

“Well I stepped out last weekend. Four of us hired a Dodge car and left for Tampa. We got as far as Bartow and lost two of the fellows when they met some girls.

“The other fellows and I left for Tampa, but got only as far as Lakeland, where we spent Saturday night and Sunday. We spent Sunday afternoon and evening with some girls who had a new Cadillac 8. We decided to go to Tampa in the girls’ car. It was a mighty nice trip with some very interesting girls.

“What I saw of Tampa and the harbor will leave a lasting impression with me. We drove out along the boulevard which runs along the edge of the bay where a great many wealthy people live just as the sun was setting. It was simply wonderful. That’s all there was to it.

“I got another move again today. I was in voice controlled scouts for only three days and was transferred with six others to the combat stage. That means that I will finish up here at Carlstrom Field either this Saturday or a week from Saturday.

“In that case, I will be transferred to Dorr Field, about 10 miles from here, for a month’s course in aerial gunnery. I’ve only spent one day on this stage, but I like it very well.

“This is the day after the night before as it were. Carlstrom Field gave a big dance last night — an all night affair — and I was in on it for the whole affair.

“We started dancing at 9 p.m. and didn’t quite, except for intermission at 12 midnight for refreshments. The whole dance was a huge success. I haven’t had any sleep since yesterday morning. I’m going to spend my Christmas leave wandering from town-to-town here in Florida.

“Well I’m a qualified ‘Pursuit Pilot’ now, having completed the course of training at Carlstrom Field last Saturday. I am now at Dorr Field taking the gunnery course here.

“Here, we do actual shooting from the air at various types of targets. I was up shooting at silhouettes of ships on the ground. I did fair work, but I hope to improve as I go along.

“Our commanding officer called us together and read us the dope on the discharges. It would seem that the future Air Service program will call for a large force of fliers. As you know I’m not altogether disappointed in that.

“When this (war) is finally finished I feel justified in saying that I have done my share. Not that I think that a great many fellows in France are to be given more credit for winning the war than we fliers are who didn’t get over.”